Has Anyone Considered Making/using Sights?


37 replies to this topic

Normally I would tell you all to fuck off and don't necro topics, but I've actually been doing some thinking about this lately. Now you guys are completely full of shit saying optics actually help because well...yeah, your full of shit. However, "iron sights" (for lack of a better term) may actually work. Here's the thing though. On real guns the sights run the length of the barrel. This way when you line them up you know the barrel is straight and what it is pointed at. Now alot of guns aren't 100% accurate, but it's okay...it's at least in the ball park and when it comes to shooting humans, especially when any hit would count, it could take out alot of the guess work or as someone much more creative then myself termed "aiming by zen". The problem with nerf guns is that almost 100% of the time none of the body actually consists of a barrel. If you have a standard PVC breech gun and you've got sights on the back and front of the gun as any normal gun would, you don't really know that the barrel is pointed in that direction. A PVC breech can be fickle and the barrel can be off just a little bit which would result in a pretty substantial difference at 70 feet. If your shot is a little off to the left it makes it very easy to dodge. But if you were to affix the rear and front sights to the barrel itself, it just might work. This is not something I have actually attempted, but it's an idea I've put alot of thought into.

This is precisely why I still use RSCB's on most of my blasters. Hoppers are good and all, but they completely destroy the line of sight. Choppers help a bit but are still less than ideal. RSCB's also have the advantage of allowing the user to place them wherever, making blasters that don't have the greatest shells for aiming much more accurate.

This is precisely why I still use RSCB's on most of my blasters. Hoppers are good and all, but they completely destroy the line of sight. Choppers help a bit but are still less than ideal. RSCB's also have the advantage of allowing the user to place them wherever, making blasters that don't have the greatest shells for aiming much more accurate.

Hoppers function consistently at even a 45 degree angle. There's really no reason why you should orient your hopper so it's completely vertical.

Shoot from the hip. It works.

Or use your barrel to line up your target. That works too.

Nerf blasters do not behave like normal firearms, so most assumptions that go into the design of iron sights are not applicable.

And as fome said, tilt your hopper 45 degrees to the right. They feed just fine, and it allows you to see your barrel.

Shoot from the hip. It works.

Or use your barrel to line up your target. That works too.

Nerf blasters do not behave like normal firearms, so most assumptions that go into the design of iron sights are not applicable.

And as fome said, tilt your hopper 45 degrees to the right. They feed just fine, and it allows you to see your barrel.

Yeah, I did full rambo shooting, and I was as accurate as I am "aiming"

Nice reference, but it doesn't apply as far as I can tell.

The nerf thing, and every airsoft sight I've ever seen claim to be "reflex" are simply not that kind of sight. They're just reflections off a plain flat surface, with no collimation whatsoever. Exactly as useful as if you stuck a few inches of wire out in front of the sight's shell with a light on it.

Such sights are as practical as one perceives them to be. No, nerf will never be all that accurate at range, and the ranges at which combat commences doesn't really necessitate any advanced weapon sight, but to each their own! I personally will be using some fat, silly reflex on my primary simply because the rails tend to get in the way, and I'll probably fire from the hip anyway!

Staring down at a sight, on a gun anchored to your hip, will make it difficult to pick up darts fired at you with any kind of velocity. Uneccessary accessories do more to distract than they do to augment, in my experience.

Not exactly a "sight", but I've often used a laser pointer e-taped to my blasters when playing indoors in the dark. (I put it near where my left hand naturally rests.) It has come in handy on numerous occasions, helping me to quickly get my blaster on-target during a frantic firefight. It helps to take some time before the game to calibrate the pointer. I try to have it hitting close to the dot at around 25 ft due to the nature of the building we play in. The nice thing is that the laser can act as a makeshift flashlight in dark enough conditions, helping give you an advantage when you are searching and clearing a room. (Of course, it can also give away your position if you aren't careful.)

There is also a slight psychological advantage (or more than slight, if you play with jumpy people like I do) where you can actually scare them off without firing a shot, even from beyond your effective range, just buy "painting" them with the dot. If they are twitchy enough, they will get the heck out of dodge, since they think you are more likely to hit them than they are to hit you.

You do, of course, need to be careful not to shine the laser into people's eyes - but when playing in the dark, that's really true of any form of light - just be responsible and no issues will occur.


p.s. - A small laser pointer slotted directly into the front of a Doubleshot, on the underside between the two barrels, is pure magic.

I think that most sights are too precise to be adapted to nerf effectively. Like tantum said, a straight LOS that lets you look down the barrel is sufficient to aim accurately enough.

I use a actual red dot sight on my modded longshot and I find it pretty accurate up to 50ft- 60ft (it gets 80ft range). The key is actually sighting the damn thing. I used a regular lazer pointer with the button taped down slide down the barrel to bore sight it. As for the Nerf sights I find them useless (although my roommate can shoot a tube of chapstick from 10ft just using a Longstrike with the sight it comes with).

"Hokey religions and ancient weapons are no match for a good blaster at your side, kid." ...Han Solo

There's a lot to be said for aiming down a barrel. Since most nerfers don't have to worry about shot placement very much (ie. aiming for "kill shots", vitals, etc.) looking down the barrel does a good job of "close enough" for nerf. Hit the body, it counts. No need for minute adjustments, etc. It was said earlier by someone in this thread to "make your gun your baby." Very true. A gun with well-adjusted sights you've never shot before won't fire as comfortably or accurately as one you've spent several afternoons shooting in the last week. Vacc's got an excellent point here. The more time you spend working on building sights to make your gun more accurate, the worse off you’ll probably be mid-round since you’re fiddling with your contraption. Sights don’t make guns accurate. Guns are inherently accurate, or they’re not. Sights just help YOU, the user, fire the gun accurateLY.

That being said, there is a time and a place.

Crossbows, for starters. Crossbows have a hunk of shell in the way, preventing one, generally, from looking down the barrel (this is assuming that you shoulder the xbow when firing it.) My barrel, for example, isn't long enough for me to look down the barrel. Instead, there's a crack that runs all the way down the gun that separates the two halves. Doesn't matter what gun you own, if it was made by nerf, I can almost guarantee that there's a crack running down the center. If you set up your barrel to be in line with that crack from left to right, you can use it. In the case of the crossbow, you can set up your barrel to be vertically in line with the flat space on top of your shell, and that space can help you quickly level the barrel. Not so much an annoying accessory that distracts so much as something to get used to. It happens quickly, and doesn't get in the way. Just practice.

Then there are annoying blasters that have curved shells. Like, oh, I don't know...the whole airtech series. If you're trying to pull off a good placed shot with a 2k, you'll probably look down the center crack to line it up. But then there's that shell. It's curved, so there's no simple or practical way to know if your barrel is actually pointing at your target, or if it's aimed up (or down) enough to miss. In a situation like this, an actual sight can be implemented. It's by no means something to be used all of the time, as sights CAN easily distract as much as they help. But a simple tube or other form of "peep" sight that allows you to center your target in it, with zero magnification and use the circle of the near and far ends of the tube to align the shot, can be invaluable. The trick is to attach the "peep sight" to the top of the gun in such a way that it is horiontally aligned with your barrel. If your AT2k's barrel is pointing way up, point your tube up evenly. Aiming during those few occasions of a round when you have a quiet moment to take aim from a bit more of a distance then becomes a matter of lining up the two ends of your tube as though they were concentric circles, perhaps adjusting slightly for distance, etc. The less complicated the sight is, the better. No range markings, no fancy adjustment capabilities. Just lined up.

Actually when I was using the 2k the easiest thing to do was to put it right up in front of your nose like a paintball gun. Then you know where you're looking is generally where the dart is going to go. Worked well for years. 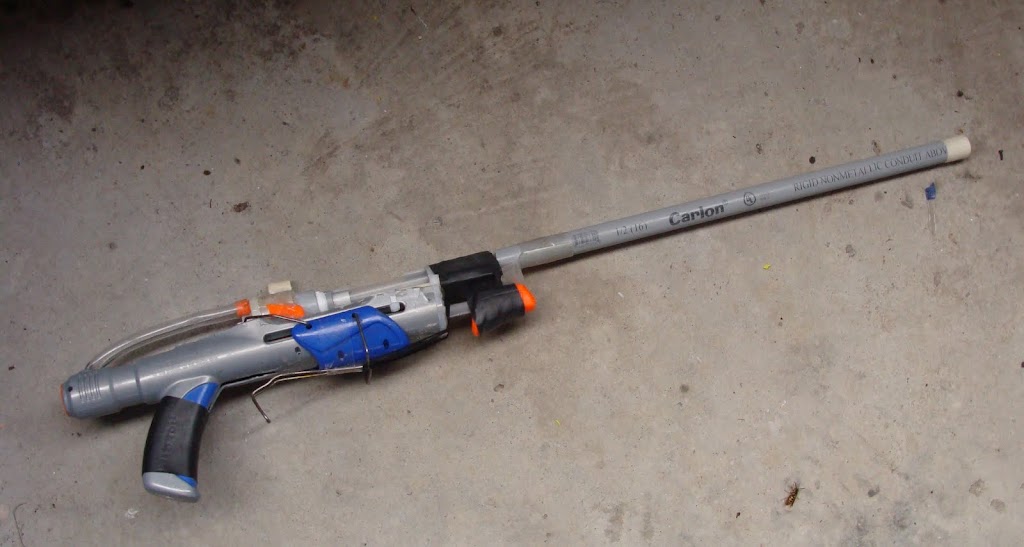 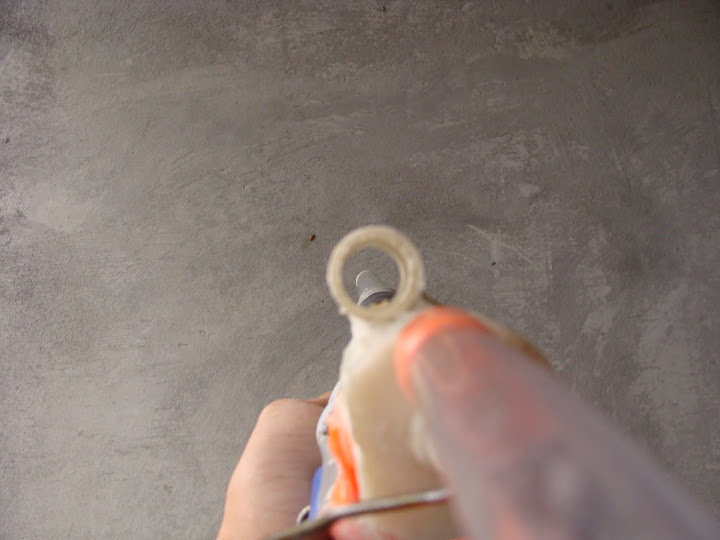 This my 3k, and since I have little to no sense of repeatable accuracy, I put a short piece of CPVC that I look though to line up with the 2ft barrel.

I've tried sights, but I find that the best method is to get comfortable with your blaster. I find it easy to hit targets 70 feet away firing from my hip with my Splitfire, because I'm so used to it. I think using sights would definitely distract me and waste time between shots by aiming through sights.