My latest; sort of steampunky NF. Got some bigger projects on the horizon.

Also, this will be on ebay shortly. *cough wink nudge eyebrow-raise* Hey guys, back, and Ive been busy in my time away, and for awhile now. Im just kinda behind on posting the products of my busyness hereso heres a bulk post for ya.

First off, some side-arms:
1st gen and holster equipped with ram rod and mini bungee that I use on it (My holstered sidearm with certain guns. Others, I dont use a sidearm):

LnL. My first LnL, and I was very pleased. Will be doing plunger head replacement and another spring replacement when I get the time to do so:

Disk shot. Short barrel, so I can push the darts down with my pinkie in the even that they dont vacuum. Some kinda spring addition, o-ring addition, and FBR in the amo holders to keep darts from sliding all the way in:

PVC couplerd NF. My pistol for gunslinger, just because its fast ROF-wise. Ive never seen a writeup for a PVC one beforebut I believe Zorn did his this way. The spring is monstrous, and to compensate, the plunger tube is basically bathing in hot-glue in order to keep it from jarring out of place. O-ring addition, again. Ranges, good enough:

Secondaries/Small primaries:
My SF. Its generally mounted beneath my +bow, but it was off at the moment, so I decided to throw it up here. Pump plug, brassed, like CXs mod. Youll notice the front is cut in order to allow it to mount correctly on the +bow:

2k. Just started and finished this baby up last night. Very easy mod, but very effective. This was inspired by OMCs 2k at the first BCNO. It had this kind of coupler set-up. Basically, the benefit I see in it, is that the weight isnt too far forward, and is mostly contained near the coupler, which allows the entire set-up to be very sturdy. Other than that though, I did the basics; Pump plug, glued trigger spring. Hitting around 90 flat. Im satisfied:

Primaries (Not necessarily ones I use. There are a few loaners that I modded because I was bored):

Shotgunned BBBB. This things awesome. I have yet to fix the o-ring problem, but Im still pretty satisfied with it. I will edit a pic in of a shell that I use once I find the original one or make anotherwhoops:

Scorpion Bow. Same deal as the BBB, but different springs. Pretty good ranges as well. No, Im not giving exact ranges for any of these. Range is over-rated unless you look at it from a velocity standpoint. I wont get into it:

Air Zone Arrow Storm. PETGd. Cant get it to work correctly. If anyone has any idea what I could do to fix itthatd be cool. Its just not firing and rotating in sync. Then, when it does fire, it fires super slowly, and the turrets all messed up:

My PAS. I love this thing. Brass breech similar to that on FAs Countess (Well, sputniks now). Spring addition, re-enforced to the nines, catch spring replaced with beastly torsion spring, duct tape knife removed. Use that knife as an example of how bored I was one afternoon:

Nice guns Diamond-----while we are showing your stuff, I might as well show my now Effeminate BBB thanks to the custom breech you made for me. This blaster was very good, now its a frigg'n monster, Diamonds work is awsome to say the least.

It's got a super soaker inside

My favorite gun EVAR. A RSCB PAS. Never fire too many, Crayola and Copper used. Crayola because I use stock darts and don't have any small lengths of CPVC Around. 1 1/2 seconds per shot, 7 shots.

Fluorescent Green painted, custom shelled, AT2k.
One of the most comfortable guns I've ever held.
Inspired by Twitch's "Nerf guns should be painted with more eye raping colors"

Sorry Twitch, but I just had to rip off the gun-balanced-on-the-beverage-bottle trick from you, It looks so damn nice.

Update on my LS, St. BLU And my new mavs 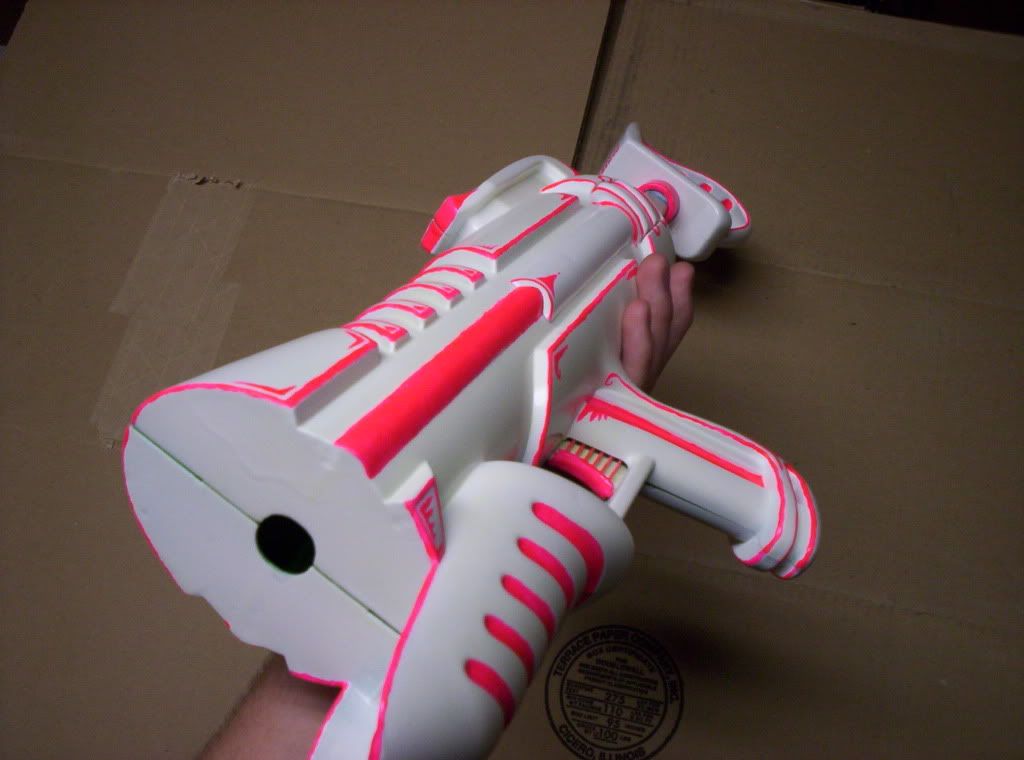 It could probably have used more neon/florescent pink, oh well.

Xtreme Jumpy where do you get your stencils? I like the whole radiation and biohazard stuff.

Anyways, I found a big blast at my local goodwill for 3 bucks. I couldn't pass that up. It now has an rscb clip that comes out of the side that has around a 1.5-2 inch cpvc barrel. I'm hoping to get some hornet tanks on this think to get rid of the dead space in the front of the gun where the original barrel used to be (If anyone knows how to rig the original hornet blast valve to some tanks can you pm me?). Here is my new monster:

The part where it comes out the side, which as clean as it could ever be...

My cpvc nested in pvc barrel that I dremeled to be a funnel type of end so that it would load easier...

New primary and sidearm. Expect no paintjobs because I am terrible at that stuff.

Side arm is a disc shot with a spring replacement.

I painted this the other day, I know its not the best paint, but I like it.

Then I painted this one while waiting for the PAS to dry, also shown is my brassed SSPB.

QUOTE
I remember when some girl in my English 101 class in college tried to cite The Onion as a source for her paper. The teacher lol'd.
QUOTE
The only time I got hit was when my spotter got hit and the enemy team realized there was a marksman in the bushes

Everything is completely removable. Holder section is 5/8" brass. Bit tight in the coupler but it works. Holds 3 darts, 1 in the barrel, 2 in the brass holder section. Gets in the 60's, so I lose 10 feet or so, but boy is it fucking worth it.

Here's a pic of some darts in the holder:

Through trial and error, I got it so that a dart would load after each shot, so no shaking necessary. It basically involved getting the start of the CPVC to be funneled just so. I can elaborate through PM's if necessary.

Can you guess whats inside?

Look what the F$#@ Rogue got in the mail today!! I received it in completely stock condition at 2:45 today from one of the best damn seller/traders here(Blue), and it looks like this now. God I frigg'n love this gun!

Ulysses. It's in the process of being painted.