Write up can be found here.

This is a Splatmatic Z90 pistol, which originally shot 1/2" paintballs out of a pretty neat auto-loading "hopper" system underneath the top rail. It was about twenty dollars on Amazon, and it's basically a Pistol Splat. To prime the blaster, pull back on the handle until it catches, and then push it back in. The priming mechanism moves the entire plunger tube so a paintball can fall into a barrel, and then moves the plunger tube back into place. It's a smart design. The safety is also functional (not pictured below, I put it back in afterwards).

I cut the stock barrel down to about 1", which was enough to keep the rubber sealer part intact, and I cut off the barrel support from the outer shell. I gooped the rubber to the stock barrel stub, wrapped it in tape, and gooped it to a bushing. It shoots decently. I just wanted a pistol I could put a 1/2" PVC female receiver on and be finished with, and this fits the bill perfectly. And yes, it's a standard picatinny rail on top, so attachments can be put onto it.

Watch the video. I need money. Don't use adblock. My first ever Nerf mod - cosmetic only... Learned a lot on this project, and can't wait to start the next one Pictured is a Longshot with a 12" 9/16" barreled full length brass breech. The plunger system has been replaced with a Buzzbee Extreme Blastzooka air tank and rigged to run off of pressure regulated CO2 and HPA tanks. It has an adjustable pressure relief valve at the rear of the stock currently set to 50 psi and contains a 3S lipo driving a small solenoid. The trigger is dual stage, when the master switch is on the tank is always filled. When pulling the trigger, it first hits a lever switch that vents the air line via the solenoid, allowing proper function of the XBZ tank blast button. The trigger then presses the blast button firing a dart. Also pictured is f10555's Longshot pump grip. Maverick Redux: as well as the cosmetics, other mods include AR removal, Spring tensioning, and also the russian-roulette mod so the drum now swings all the way out. 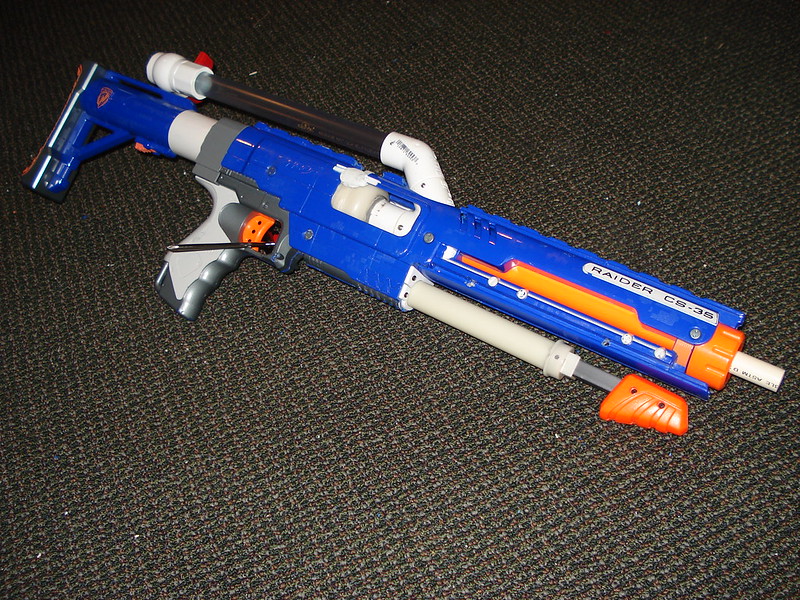 Write up is here 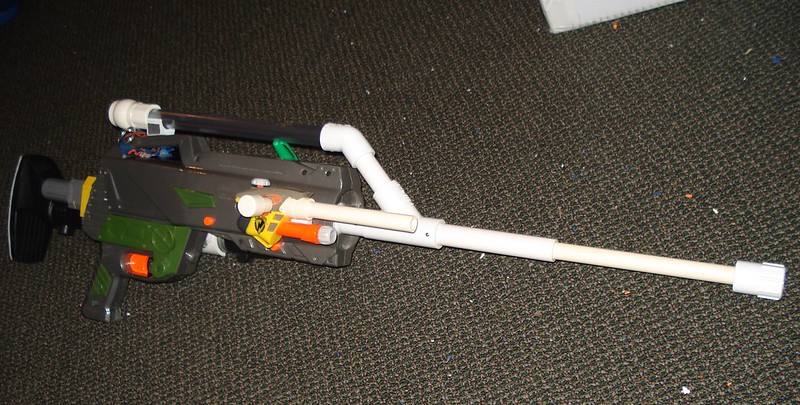 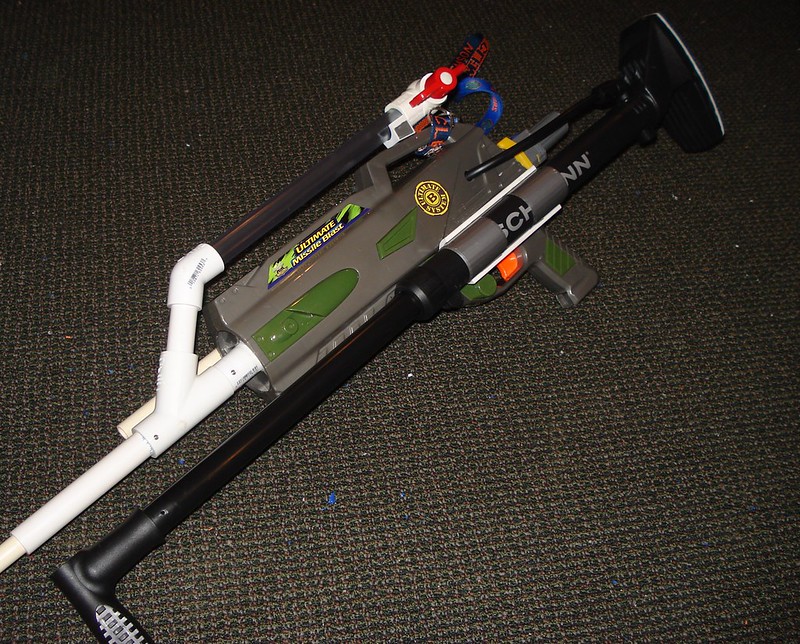 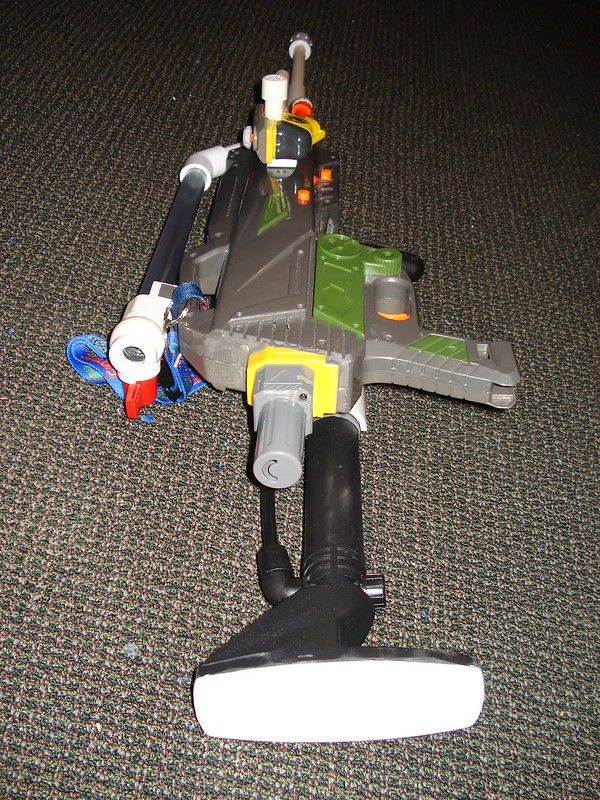 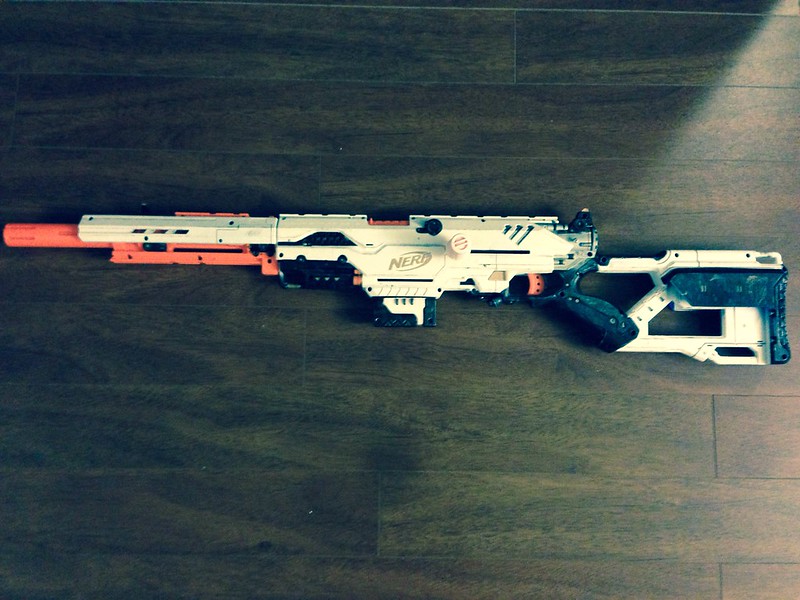 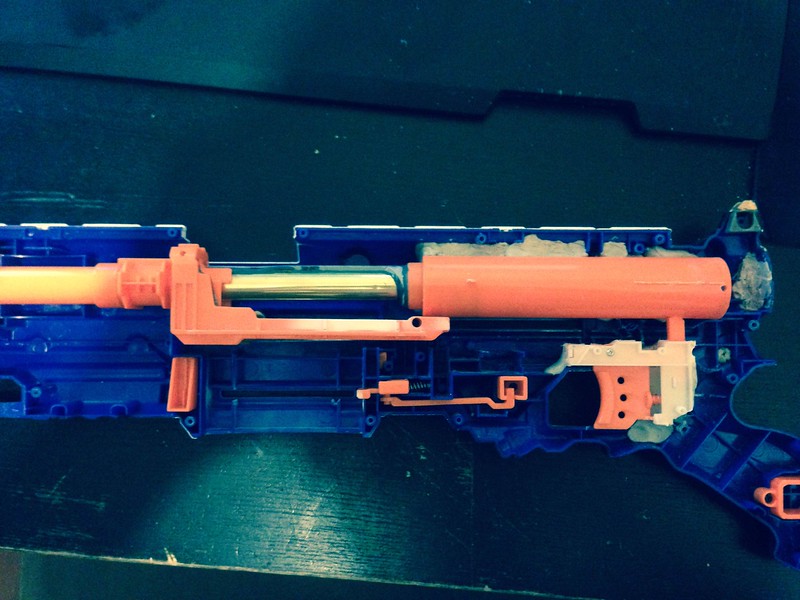 Magnus internals in a Longstrike 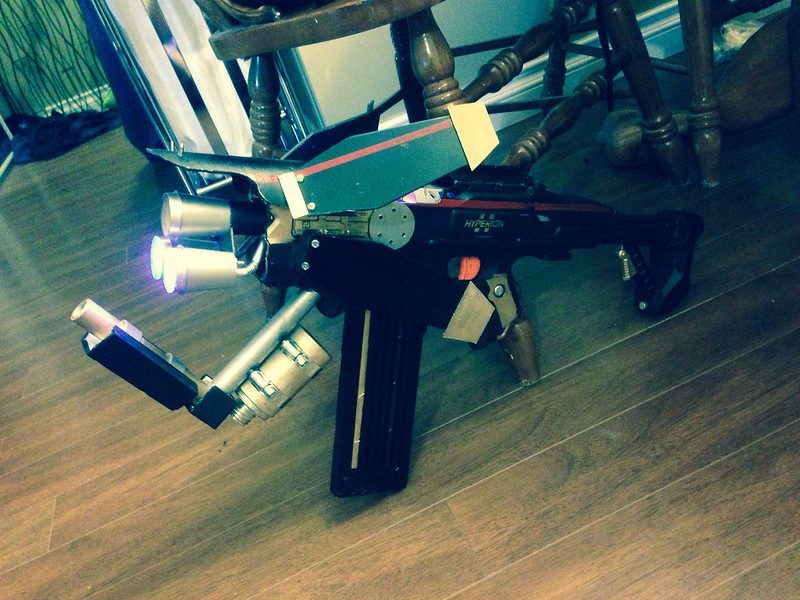 Rapidstrike modded based off of a Borderlands Hyperion Plasmacaster

If I finish my cosplay in time, I'll be bringing this to NY Comic-Con 2015
It would be great to get a vid of Nathan Fillion firing it (Buck from Halo, Malcolm in Firefly, Castle in Castle).

I want to give a special thanks to shandsgator8 for getting me the small screws to combine the 2 halves of the gun back together. I misplaced the ones it originally came with, heh.

The only place Wal-Mart exists in New York, is in our TV's.

Really happy with how the Rust-oleum hammered metal paint turned out with the Testors rust paint added. The aluminium tape I used for the barrel, trigger and grip doesn't look too bad either - fiddly though... Haven't posted a picture in ages, but here goes nothing.

My current revision of my Creamsicle 4B. Not much done other than a 1/2" PVC Coupler on the tank and a greased up trigger. I also minimized it a tad differently than most.

Soon to come upgrades are an aluminum trigger, forward pump replacement, MFT Stock, Magpul Grip, and a Load of other fixins. I'll be sure to post them here. Maybe a write-up will be soon to follow.

I have taken a "break" from the hobby, but if you have anything crazy hit me up. I'm always interested in a challenge. Currently designing a nerf vehicle among other things.

Posting these Hammershots as a link so they don't run afoul of the new image rules.

Sorta finished, but there's a few more things I think I'd like to add to it yet. I'll update this post if I do. The Rough Cut is held on with some velcro and a little tac rail to tac rail attachment I made using a Recon and Longstrike flip up sight:

The flashlight holder is just a slightly modified AT3K trigger:

One of my first paintjobs Just finished this one Get chance and luck

my deadpool sweet revenge. made it for my nephew. it also has an upgraded spring. its done with vinyl dye and citadel white for the eyes.

The primer didn't take to the plastic very well, and I discovered that Testors Rust is completely useless as a base coat - the slightest rub will take it right off, as you can see on parts of the chain.
So, I decided to use this project to test a couple of different finishes. The rusted blue was an experiment using rock-salt as a mask - pretty stoked with how well this worked... ...and a patinated brass for the back of the grip and the muzzle. I'll be using both of these techniques for future projects.