I present to everyone Project 4S (Shoopy's Secret Spector Surprise).
This ain't no standard (or safe) sceptor.
This is a modded sceptor. I has been modded following Hero's writeup.
In addition, it has a custom wood stock and 3" PVC tank replacement.
I can fire 25 shots with 50 psi in the tank. I can certainally go with a higher psi but I'm scared it will blow up

Currently, the tank it closely connected but it will be in a backpack with the compressor and battery.
Standard 100' ranges.
This gun is a lot of fun to shoot.
This is Phase 1. Phase 2 will have the backpack setup. So, I decided to finally put this up here, after I finished it almost a month ago...
It is my Nite-Jolt! The nitefinder has seal improvement, spring replacement, cpvc coupler, and a little integration.
The jolt has a cpvc barrel inside 1/2" conduit pvc to make it more sturdy. Also, it has a spring replacement, and red/black paint job done by princesspeach33.
The Nf gets about 75ft flat, and the jolt gets about 60ft flat. All that I need to do now is get some magnets for a holster, and BAM, it's ready for action!
The integration is messy, but it is essentially super glue, hot glue, and goop. Also, it is held on with a purple ziptie.

Background: I'm going to a certain annual 24-hour long HvZ game in Washington State this month. Game is literally 24 hours - from noon saturday to noon sunday - with zero time-outs for sleep, eat, pee, etc. The game hosts ask everyone to paint their blasters ("Guns") as realistic as possible, and don't necessarily require orange tips. This is the 5th annual game. I've never been, but I hear they had 300+ players last year. This blaster is for that: Shout-out to any nerfers in Washington State: the game's website is here. It's next weekend - September 08th-09th; $25.

The blaster's stock features a IR-based nightvision scope.(Basically, Infrared LEDs are on the front and side of the scope and project light which is below the human visible light spectrum, a camera lens views that light, and displays it on the internal screen in the form of that classic green monochrome like you see in spy movies.) Powered by a 5xAA battery pack, all of which is connected to the detachable shoulder stock. The IR LEDs have 2 brightness settings and are controlled by a series of switches mounted on the right side of the scope. I put a pressure sensor inside the rubber guard around the eye piece, so when I put it up to my face, it turns on.

This is different from the first one because: The vinyl tubing is longer, portable compressor, 2 6v batteries powering the compressor.

The 2 6v aren't powerful enough to power the compressor to full potential.

Phase 3 will have a 12v battery and regulator/OPRV.

The immediately previous owner bought this Splitfire with a dinged-up layer of white spray paint and banged-up, poorly cut internals. I sanded off some of it over a few days, and at this point I like the weathered look it has enough that I think I'll keep it (mostly) this way. I put eight inch CPVC barrels on and used a few layers of goop and newspaper to ensure an airtight and straight setup. It shoots way better than I expected it to; these things have crazy range if you pull the trigger fast enough.

Heres some things I made awhile ago.


My prototype Gun Blade. Sort of reminds me of Halo sword.

A mask inspired by Darth Maul for a friend. Various projects - personal and commissions - from the last 6 months...

A WIP of mine, stampede handle with polycarbonate plunger tube and interesting priming mechanism. Currently hitting high sixties with ~2.5inches of draw, and a [k26]. Pm for more details. Once it is finished I plan on doing a writeup. [/URL]
If pictures do not work let me know, they seem to work for me.

Much nicer to pump now.

Okay, so before, this was my brother's triple shot, and it said "princesspeach33" on the top part. I re-painted it, and wrote "BHAJJ94" there instead. I also re-painted the pump handle (badly). I'm going to re-do some of it, painting it black and orange. Also, I re-turreted it. I just need to fix the air seal both between the turret and the PT, and in the PT. Right now it's shooting 75', but I'm expecting it to get around 100' when done. I also added the stock from my old UMS.

Anyone still wanna see a panther? I don't care if you don't, here it is! I transferred it from a secondary, to a viable primary.

Here are some of my recent mods.

Nerf Praxis same as first two along with an extra clip attached to each side and my custom flashlight.

The main body in the case.

The ammo and barrel in the same case.

Sceptor. Hoppered, tank replacement, handle replacement (obviously)
The barrel is completely wrong, it needs some SCH 80. The huuuuge tank is going to be stored in a backpack while playing. I can consecutively fire 30 shots when the tank is full with a stock OPRV. Just the blaster by itself. I really like the positioning/angle of using wyes for the pump handle, but didn't want to waste a wye on something silly like a handle. Sexy Crossbow is sexy. And yes, that's a tacti-cool rail on the top...bitch. 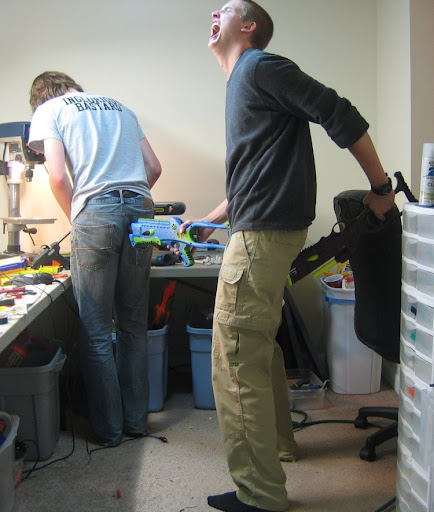 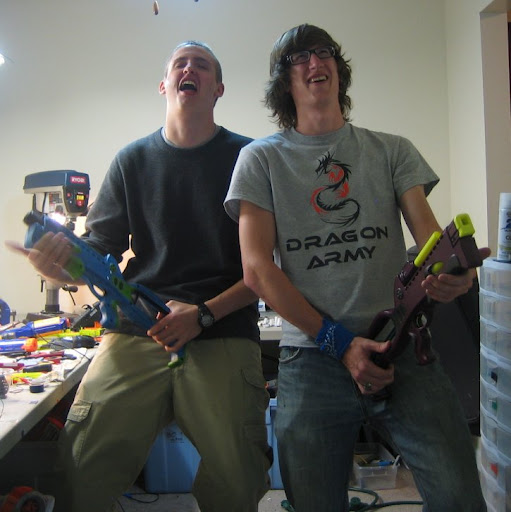 First of, luvin that sceptor 2 posts above. (4S FTW)

Back from the dead, son! If you were at PWN>U, this is the annoyingly awesome gun I used. It is the only air gun I actually prefer to use at a NIC war.

I had other plans for this thang but never succeeded. I just decided to bring it back to its original roots, though I changed some things. I mechanically fastened pump so it doesn't fall off in the middle of a war (again). I also added a ball-valve so I can command if the pump fills both tanks for just the UMB. It's actually really effective.

Got my hands on a Panther. These things are absolute beasts, especially considering the $5 price tag. Less than an hour's work, and a day's drying (for the Goop and the epoxy putty) and it was ready to rock. The pump is untouched - i.e. stock OPRV - and is fully capable of firing the last shot from my RSCB and from my PumpSnap's hopper at decent ranges. I haven't measured, but the last shot is hitting at least 40' flat.

The most important mod I did, though, was the pump handle, which is just some CPVC (drilled out a bit to fit the pump shaft) and an elbow. Much easier to pump now.

Obviously, it is hitting even better ranges with a single barrel - clearing my entire back yard. (I really should measure it sometime for better range estimates.)

Aside from the basics of cutting off the original barrel and shaving down the shell to fit, I also filled some of the dead space in the coupler area with epoxy putty.

Inspired by the Marvel comics and created for a mod exchange with ThatBritishGuy. 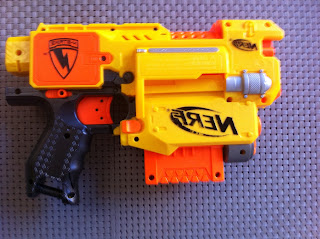 Took out the jam door lock and rewired it to rev the motors when the trigger is pulled just a few mm. Twisted the thermistor to cut it out of the circuit.
More specifics and stuff over Here