I made a quick mold using 1 1/4", some bushings, and 1/2" PVC, and poured in this stuff. Originally I was supposed to hammer out the 1/2" PVC, so I could plug that in instead, but the PVC is stuck in there. I was able to hammer it out in a smaller batch, but apparently not this time. Luckily 1/2" CPVC fits in this PVC really well, which will work just as well.

This stuff is definitely cost efficient as well. I was able to use 16 oz of material and get 15+ usable bushings, so under a dollar per bushing. That's not even considering I didn't buy this stuff in bulk, or get the cheapest price possible.

Okay, so the following was inspired by NerfOmania's PumpSNAP design featured here. I used essentially the same priming mechanism, so the functionality of the blaster is basically the same. However, I made a few key changes that make the thing far more leet.

Okey, so first off, every single joint is mechanical. Yes, I gooped around the bushing, but that was not for structural integrity, just simply to make sure the seal was perfect.

Handle to plunger tube. This is a carbon style handle, but sized so as to not interfere with the pump grip. There are two screws on the other side as well.

Pump grip to pump slide. I went with a vertical pump grip to make it more comfy to use. It worked, and is quite a lot more comfy.

I also made a few more changes...the blaster is >3" shorter than the original, and still has a 6.5" draw. I obviously used clear PVC, but I also used a skirt seal:

Added a string stop for the plunger rod:

I only used a single string, not one looped through, which goes through a hole in an endcap at the end of the plunger rod, and then is knotted so it can't pull out, so I ran a bolt through the stock, which allowed the string to stay centered in place, and then knotted it on the outside of the tee.

And a cover for the priming slide so that you can lay your cheek on the blaster without eating it up when you prime:

Being that it has a 6.5" draw, a [k26] spring, and a skirt seal, it shoots super far, as far as my other big guns, though I don't have precise measurements. I'm super happy with it, works quite smoothly.

Just for reference, I started building this a couple hours after I posted the last homemade seen two posts before this one...

I thought that this one needed a background...

Also, everything's mechanically fastened just like my last SNAP, the pump action one above. Uses a skirt seal and a new plunger head design that works flawlessly. I'll post a little write-up the next time I make one. It's seriously awesome, and pretty easy to make.

I haven't shot it outside yet, being that it's dark, but this thing's terrifying. I struggle to even keep my hand over it to check the seal, which is perfect, by the way.

Made yet another homemade today:

It's pump action, and uses a ring catch.

It was my first time constructing such a catch, and I must say, it works flawlessly. I like it a lot. Also, the handle is surprisingly comfortable. Functionally, it's pretty much the same as an RBP.

Three different homemades in three days...the kid's on a roll.

Four for Four...
This one's a RainbowPump. Yippee

Finished up my latest homemade, a RCP-Ring Catch Pump (similar to the one Diamondback posted 2 post back) on Monday, but was too lazy to take pics then...
It's not completely, done; I still have to remove some sharpie writing and find a way to un-fuglify the handle. I was careful, also, to keep the words "Reclaimed Water-Do Not Drink" from the side of the 1.5" thinwall PVC (FlexPVC Purple) visible...

Here she is in all her awesomeness; don't mind the pink sheets...they're NOT MINE!

The main blaster body is 1.25" PVC, with 1.5" thinwall PVC as the pump grip. The catch is a ring-catch, with an angle iron on the bottom as a trigger. There is a piece of 2" PVC as the sheath of the back-half of the blaster, with a 1.25" PVC tee inside of it(which goes over the 1.25" slotted piece/plunger rod guide @ the back of the blaster), acting as the stock. The handle is made of 1.25" PVC. Everything hwith here (besides the stock) is screwed in with 1/2" or 3/4" countersunk wood screws (#6).

For the handle, I didn't like the idea of having a 90 degree pipe, so I improvised a bit. I cut a 2" piece of 1.25" PVC, then a 3-4" piece at an angle. I then solvent welded them together, after which I put JBweld to reinforce/bulk up, as well as e-putty on the inside to reinforce.
It's looking quite fugly right now; I'll be fixing it sooner or later...

All in all, this thing was a total blast to build, works flawlessley, is quite comfy, and would be an awesome RBP-type blaster addition to ANY arsenal!

Picture dump time! Been in the works for a while:

PM me any questions please, as this thread is pictures only.

I'm the only respectable person here. The rest of the NIC are pretty much just child molesters.

AKA: ObiWonTwo on Nerfrevolution, and most of the rest of the internet for that matter.....

$5 bi-valve, some scraps of pipe, and JB mother F'n Weld and you get the stuff dreams are made of.


BAM: I can always have one full hopper while reloading and I can fire one while the end cap is open on the other.

Modular, can go in any blaster with a brushing or coupler. AND, if so inclined, two shots can easily be fired simultaneously.

The valves are easy to twist on this one, but some were quite difficult so try a few out if you plan to do this. I am wicked anxious to use this at the MN late July war (on a BBUMP, most likely).

I finished building my Jet Stream Power Blaster
I give you... The Wasp A while back I made a homemade pump, however it had some fundamental flaws. I gave it some more consideration recently. Using just a few random parts from the hardware store, I now have a much more efficient and functional pump head. I've just been testing this in stock pump tubes (AT2Ks, Hornets, SM1500s) so far, and it seems fairly on par with the respective stock pump heads in terms of air efficiency and pressure. I will be measuring PSI levels soon to confirm this. This prototype is a huge stride in my personal goal to make a cheap, simple, and efficient pump that is a suitable replacement for SM1500s and AT2Ks. Feedback is welcome.

Louie got pretty excited when he saw this.

Alright. Because NO ONE can seem to make an obsessively simple nerf clip coulperable breach:

Grab the orange duct tape, slide it forward, then back. works iffieshly with streamlines, but pretty well with stefans.

Outside peice: two chunks of PVC, one 4" long, the other at least 1" long, 5/8 drilled, puttied together with a chunk of rod, which is like a long screw with no ends, 3" gap between peices. 1/2" peice, start 3" halfpipe, AT LEAST another 5 1/2" after the pipe, then duct tape the end, and put a single layer of scotch tape after the halfpipe, so it will seal.
(1/2, 3" HP, 1/2 w/tape, 3" for clip, 1" for 2nd peice of pvc to hold, 1" for duct tape) Linear order of "peices" on CPVC barrel peice.
Standard priming (back then forth) motions, dart teeth, Bolt-action pegs, solid pvc tube machining (no rod), clip box, maybe more, all coming soon. AND VENOM: Nice pump, where does everyone get o-rings?

This is the Tedbow. The stock is totally filthy even though I kinda fucked up the tapping and will probably have to make one again. It's like, a normal +bow stock is kinda flimsy, well this is basically like, "Maybe filling the holes with super glue might be a good idea for now," kinda thing. BUT MHMM IT SURE IS PRETTY AND TOALLY NOT ICE NINES.

WoW is destroying my life.

Continued failure to build a HAMP that won't FALL APART! Hardware next time...

Homemade polyfolder holster for my SUPER minimized NF. Fastened with hot glue and tape - the hot glue actually welds the plastic together because of its low melting point.

Some quick details:
-Uses original catch/trigger
-[k25] spring
-3/4" PVC couplers on either side cup the spring and keep it perfectly centered
-Plate in the back and rear 3/4" coupler allow everything to be mechanically fastened. Thus, no glue. Hooray!

For more details, wait for the writeup

(This was a surprise for my bro, btw, he's happy with it)

Dont believe I posted this:

I do not want to meet the man that has hands large enough to use this gun... 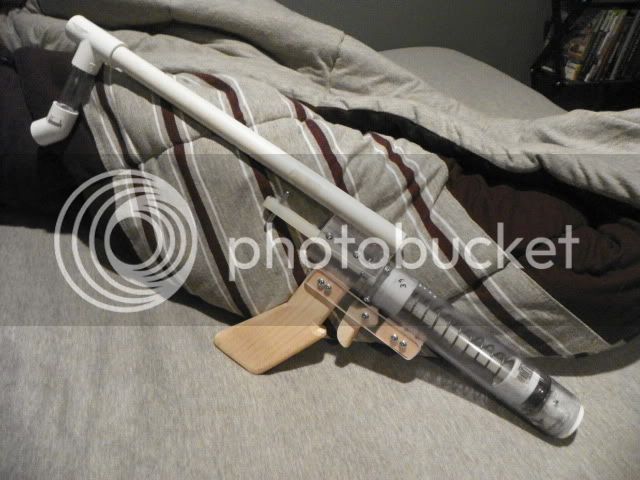 Super short Rainbow. Obviously the stock makes it a bunch longer, more than doubles its length, but the PT itself is only about 10" compared to the standard like, 15" necessary for a full sized one with an 11" spring. It has a 6" [k25] spring, and is made so that I could maximize the draw, while still having a blaster that could be used comfortably with a stock or without one, fired like a pistol. Uses the same dual endcap method that I used in the nitefinder, which cups the spring and keeps it perfectly centered. Uses a Rainbow catch, obviously, but it was made to use a square plunger rod (more work, but yields nice results. The plunger rod doesn't rotate on ya). The front piece of wood in the handle isn't actually attached to anything, I had this handle lying around that I'd made for a build I thought I was going to do, but never got to, so I just figured I'd use it on here. Looks good with the extra piece so I left it. All in all, I'm very happy. No ranges, cuz it's dark, but it should shoot farther than the NF I made for my bro, being that this has over an inch more draw. That shoots 80-90...you can predict what you'd so please...

This is my latest pumpbow that I built. Designed by Dorje.
It has Dye Sticky grips, a tac foregrip, and a flame trigger!

I machined a plusbow the other day using the materials I had and the paint I had left, and I'm quite pleased with the end product. 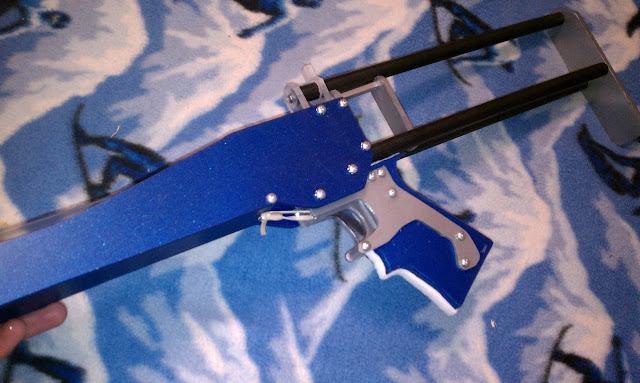 Single side plate, precompression, all the good stuff, and glittery / metallic paintjob.

)
Still trying to think of a good name for these...

And a video of the original