What kind of darts are these?

When we bought a bunch of blasters from someone a while back there were these darts that I do not recognize in with them.  They are yellow with an orange/red semi translucent suction tip.  As you can see in the pictures they are bigger than the normal micro dart (koosh dart in the pic) and they are smaller than a modern Mega dart.  I tried them in an old tech target blaster with the larger barrel and they were not big enough for it.  I also tried then in an ERTL dart gun and they were too long for it.

I suspect that someone on here knows what they are.  So what are they?

I have done the crayola mod on a Berserker before and it turned out great. I call it Ultra Rainbow... Taste the Rainbow. 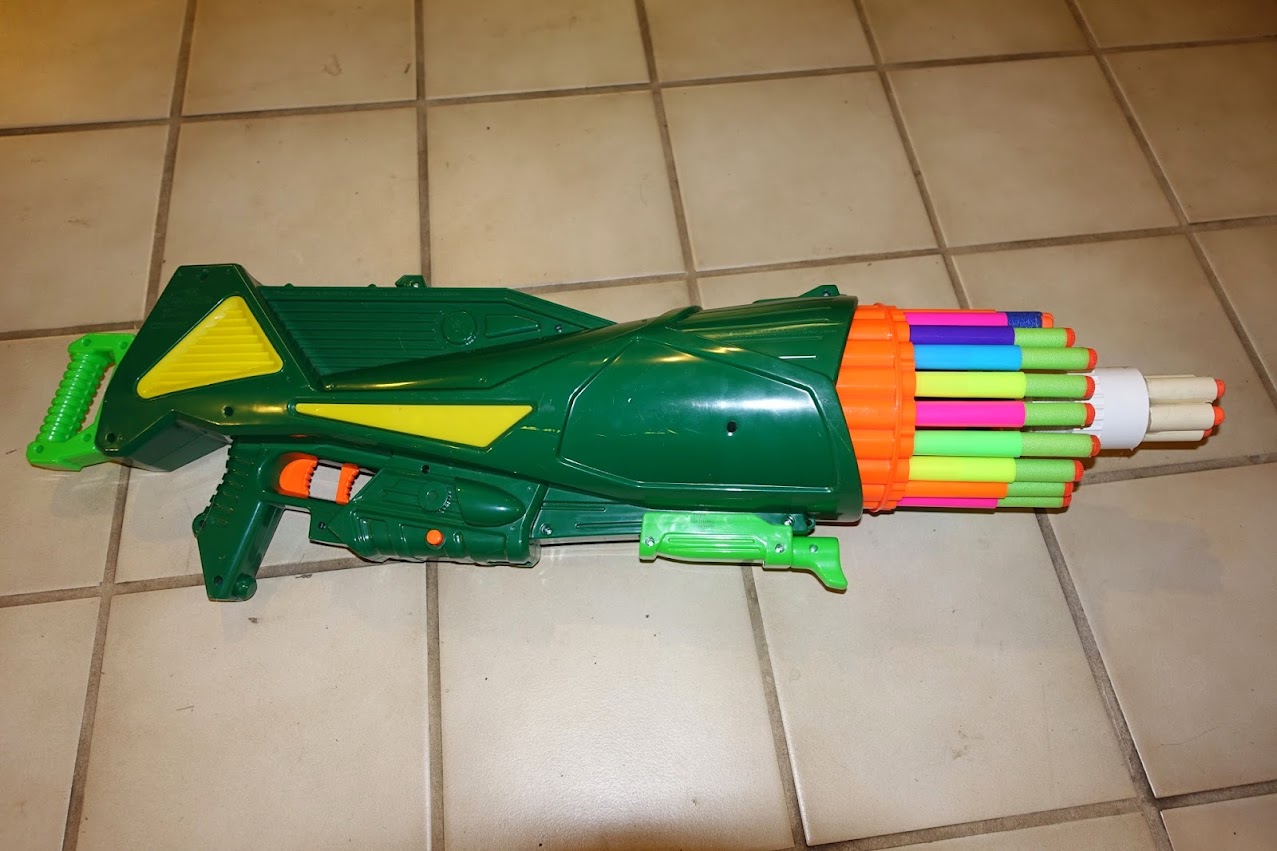 I used some Dollar Tree markers. All I had to do was take apart the marker and stick it into the tubes and it worked. I just got a bunch of crayola markers from one of my son's friends and I did the same thing with them to another Berserker and the performance was sad. At first I thought that the Berserker was bad but when I put the Dollar Tree marker tubes in it works great like it should. I also took a drill and drilled out the ridges on the inside of the crayola markers and it helped some but not much.

Does anyone have any ideas as to what I am doing wrong, or what else I need to do to make it work with the crayola markers?

I am looking for a source to get cheap tagger (velcro) darts. All I can find are the official nerf darts and the lowest price that I have been able to find them are around $.31 per dart. I have been buying koosh darts for under $.10 a dart so it is hard to justify more than triple the price. Has anyone found a source (I am guessing it will be in China) for the tagger darts?

I do realize that they don't work in clip systems but my son sells a large portion of his blasters to parents for their kids nerf war birthday party. Power and distance are not as important to the 6 - 10 yr olds. Fun games are what is important. There are lots of fun things the kids can do with the tagger darts.

What to do with empty nerf blaster shells?

I have a couple of hornet blasters where I have taken them apart and am selling off the pumps. This leaves me with two blaster shells that I was originally planning on just tossing. Then I was thinking perhaps I can turn them into something else. Right now I am thinking about getting some small led panels, mounting them to the large front opening and adding a battery chamber to turn it into a cool looking powerful flashlight.

I realize that I could just paint it and make it look cool. However, I am looking for something at least somewhat functional, other than just as a prop or decoration.

Does anyone else take their leftover blaster shells and turn them into anything non nerf? Or do you just toss them or rip them apart and use the pieces of plastic for spare parts?

Has anyone been able to find who the manufacturer of the koosh darts is? We have only been able to talk with the person selling them on ebay under the beautifulwoman and one other name with man in it. From what I can tell there is a positive feeling about the koosh darts and I know that I think they are better than the elite darts.

I am asking because I want to order a large number and then resell them. I want to get the manufacturer to use a better glue on the heads and also to get them in other colors. We have searched on alibaba and some other sites but have had no luck.

Also any feedback you have on the koosh darts would be appreciated.