What a frigin coincidence, look what we just made. My personal take on a motor swapped Stryfe Roughcut masterkey.

I don’t often upload multiple images of the same blaster here, but I think it’s appropriate because each angle shows a new level of awesome with this blaster

I call it The Stryfly. It’s a Stryfe with a Firefly stock in the back and a detachable Retaliator barrel with a Rough Cut attached to it. There are numerous internal modifications, but I won’t waste space here in the picture thread. 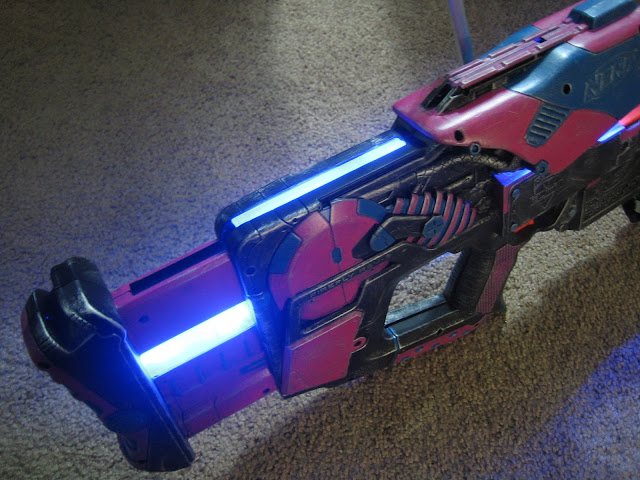 There are four LEDs mounted in the Firefly shell pointing downward, directly into the Stryfe shell. It’s difficult to capture the LED lighting in a photograph, but it’s very cool in person. 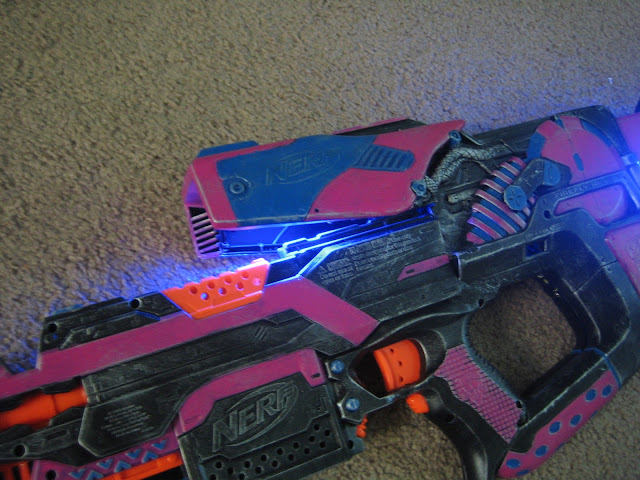 Yes, the front is detachable. There are two different circuits and switches for the LEDs to make this happen.


This was made just for the LOL's. I am well aware I made a nice, compact blaster incredibly bulky and funny looking. But I still like it!

Ho-ly shit!
Edit. I didn't mean to post this. When I clicked the picture It didn't say it was the pictures thread. Delete this post.
USER WAS WARNED FOR THIS POST
"Ho-ly shit!" does not qualify as a value-adding post in any other thread either. 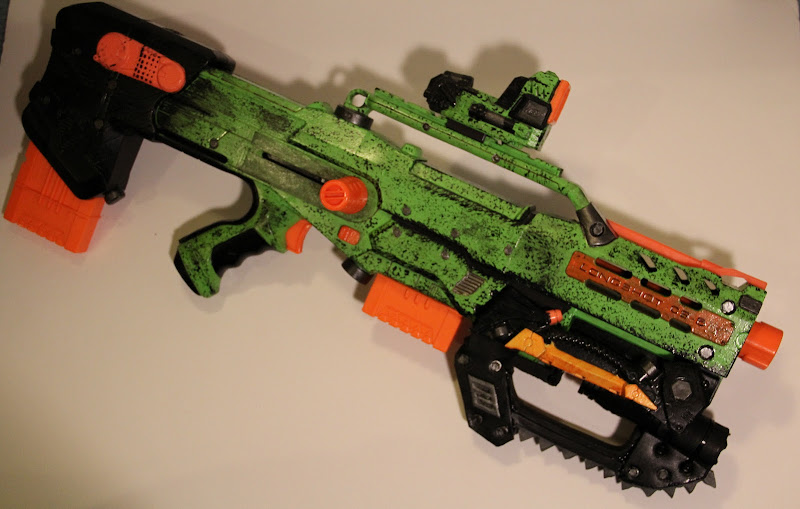 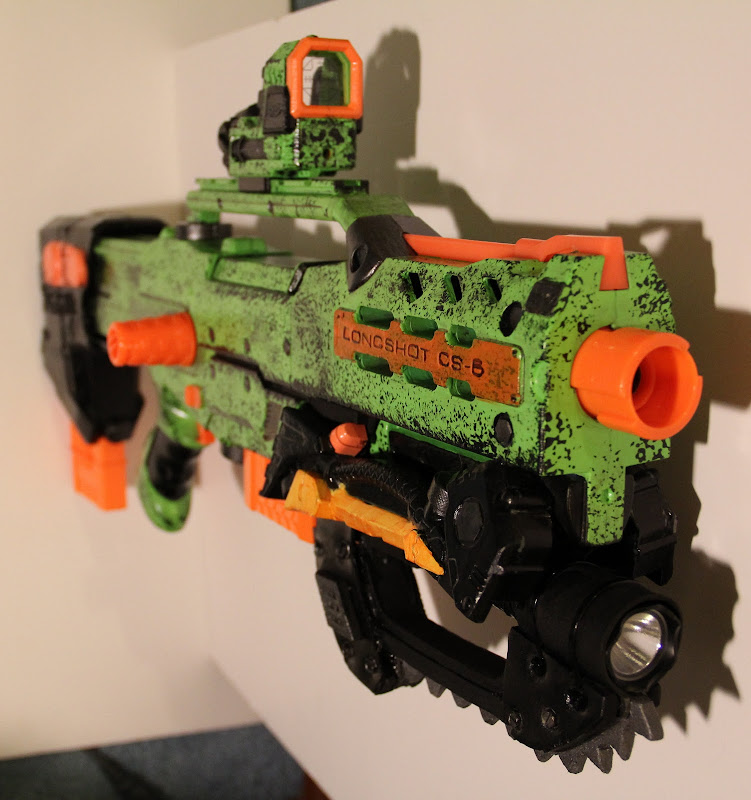 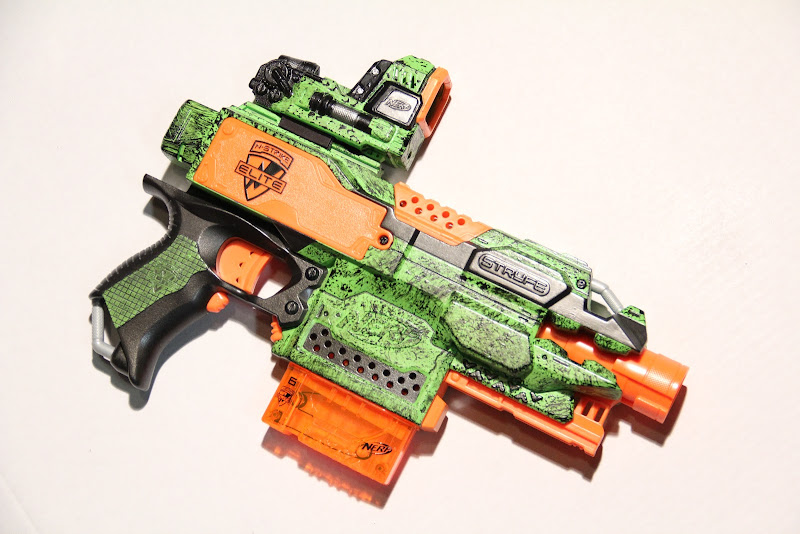 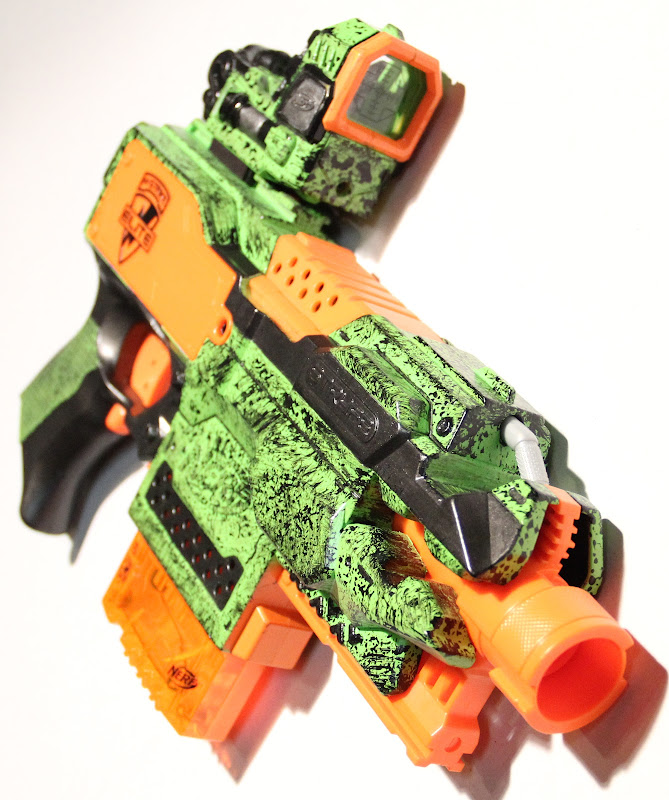 This one's not real impressive but it's the first mod I've done in ~2 years and it came out much cleaner than I expected. 17/32" brassed NF. Worked on a Rayven. Mods done:

--Replaced the AA's (1.5 volts each x4) with a 9v battery harness
--Toggle on/off switch added, replacing the rev up switch
--All resistors removed (9v direct to the motors, wired in parallel)

Standerd AT3k mods with wonderful barrel spacers made by NoM

Look I actually got something done. Tested it and it shoots hard, so it'll be going into a secret project.

First up is my Supermaxx 5000 with a Brass Breech

I also have another Supermaxx 5000 coming in the mail

And lastly is my Stryfe, Rough-Cut Integration Here is my take on the Stryfe Roughcut integration:
The Stryfe has the resistor and locks removed, rewired with fast deceleration mod, 3 trustfires and one dummy battery.
The Recon barrel has been gutted and a much wider barrel has been put in.
The Roughcut had 2 6kg omw swarmfire springs in it. The locks have been removed and dart posts trimmed so it can accept any nerf dart.
Paint job is krylon fusion hammered metal.

I don't praise queer wye's nor queer "hoppers" I like them for close quarters office wars.

Work in progress. Swapped its internals for a Panther tank. Everything is complete except the seal. The stock can also be removed by unscrewing the blaster and taking out the gray back plate and placing in a different one.

Brassed Jag matches stock elite ranges with proper darts ^-^
Spraypainted with outdoor plastic furniture paint, wooden grips made from a scrap 2x4 in my yard and varnished with spare varnish. Attached by way of pins and screws. Also, didn't think it was worth a new post to show basically the same blaster I already posted, but I repainted my pinpoint sight to match my LS.

The Rough Cut is held on with some velcro and a little tac rail to tac rail attachment I made using a Recon and Longstrike flip up sight:

The flashlight holder is just a slightly modified AT3K trigger:

If you want to buy this pm me. For more info on my blasters, and paintjobs, look here!

Here's my hoppered Lego Atlantis Harpoon Blaster that I run off 5 pumps. Mods include the following:

Check out the full write-up at my blog: http://nerfbuff.blogspot.com

For more info on my blasters, and paintjobs, look here! 
Sorry about the picture quality, camera was acting up

Two tone, word to your mother.

Got a ghetto cardboard spacer for the time being until he orders a venom one or whatever he wants to do with it.

Smexy...
Back to Modifications · Next Unread Topic →