SGSL with Hornet tanks, all fire at the same time, very fun in DTC.

ARE YOU HAPPY JAKE?

Got some paint on my SNAP
Not my favorite scheme, but its different I finished my 5k thanks to atomatron.
The scope is actually useful.

Stock, Mint LnL that actually is up on eBay.

I also have internal pictures for my SalvoFly V2:

Breech for now; hopper to come.

Lots of guns, I like to buy the gun, mess with it, and call it a prototype. Sometimes.

The rest of the RF20

First time with pics, so if they're too large, then I'll change that next time.

Pictures containing other naked bodyparts other then hands and fore arms should be forbidden.......

Look what I cooked a Firefly-rev8 with a 3K filling:

Here are some pics during cooking:

Overhauled Airtech 3000:
This blaster has been through a lot. I completed the mod about a year ago, and it has surprisingly needed just a few repairs in that time. It's been used in numerous wars by several different nerfers. The coupler on the back is held in by screws on both halves of the shell and is there to attach a stock to. I put 1" segments of 17/32" Brass at the back of each barrel. The brass helps dart stay in much better.

It's equipped with two of my revised barrel spacers. Originally it just had one spacer and it was made out of Acrylic. The construction of that was frustrating to say the least. Use proper materials!

I used an external pump because I didn't want to take the time to make space for it in the shell as well as it being accessible without having to open up the entire blaster.

I used a Shrader to 1/8" NPT adapter to connecting the pump to the Brass elbow. There's a 1/8" NPT Hose Barb connector in the other end of the elbow which connects to the airtank.

The rotation mech weakened over time and eventually snapped at the part where it connected to the shell. Nothing a huge glop of hot glue can't fix.......

I've been very happy with this blaster. Even though I made it at a time when I was far less skilled and rushed to complete it, it turned out well and still functions acceptably to this day.


Here is a contract I finished this afternoon for a guy in my office. AR's out, Padded plunger tube to kill that terrible plastic on plastic sound, and some metallic paint for S+G's.

Another one of these things. It was reasonably tricky to get it firing perfectly without jamming

Clear paint on a clear Mav "But it's missing the button to change the cylinders!"

"Wait, what's that sticking out the bottom?"

I present to you: Recently Updated Lever Action Triple Maverick.

I stole my "liddle brudda's Eastah Basket" and cannibalized the handle into a lever by drilling a hole through it for the second (non-screwed) post just in front of the trigger. The lever pivots on that post, pulling back the cylinder catch assembly by hooking a flat portion of the handle under the catch face.

Takes a little oomph to do it, so this is not one for the kiddies and the limp-wrists, but being able to release the cylinders on my beast without having to take my hand off the handle is kinda nice, especially considering my plans to mount it to the lower half of a Magstrike and Semi-Auto it(Same method as the Semi Auto Firefly). I still haven't decided if I want to use a Hornet tank or a Salvo tank for the shoota. Can anyone tell me (PM) if a Salvo will fit in a Mav Shell? If I have to cut the main shell a bit, that's fine, but I'd like to be able to keep the priming handle clean for appearances.

I considered having the button as a backup, but it was in the way of the lever, so I took it out, which is fine, now I have a window to see if the catch is set or not.

This one is Kid_Flash's, made from the tank in the writeup.

Mod party yesterday. Mod party has degenerated into "Zorn is dead, Zeke builds Big Blasts, and Ryan and Kane build random things and have conferences, and then we play video game" parties.

The first one needs a new pump, the second needs a small pump fixing, and the third needs trigger refinement.

Side note: McMaster OPRVs are cool, but when they pop, they POP. They dump about half the pressure off the tank nearly instantly instead of slowly venting.

Its rear loading. Turret shoots about 60' flat with slug darts. Write up is posted.

Just need a pump and a chopper through the shell

This is my first or second post in this thread, since I normally do not take pics. Just a couple things I wanted to share: 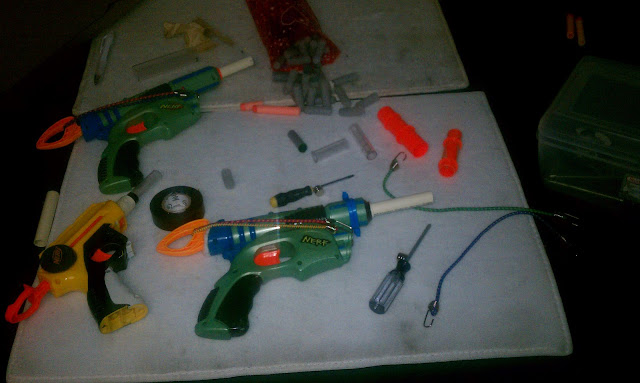 ^ The 1st Gen TTG in center was done on a day off from class. Both TTGs are plunger-tube replaced, spring swap, CPVC couplered barrel, and 2 10" bungees on each. Then NF is cut down, Spring replaced, CPVC coupled, and PETG Barrel. 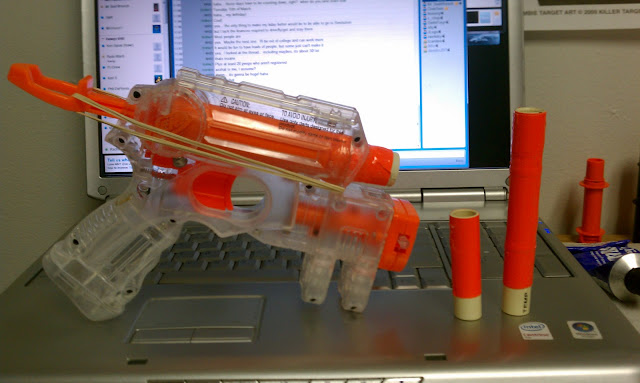 ^^ This is for the head of the Leadership Program here at college. 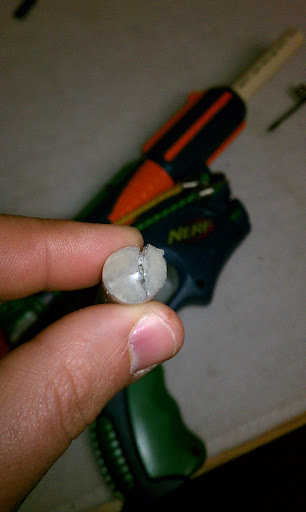 ^^^ Not a clear pic of the blaster, but its a 2nd Gen TTG, broke the glue dome at 70'. It has the Plunger tube-replaced, New spring (I'm not sure where spring is from), Double O-Ring, CPVC Couplered, CPVC Barrel, 2 10" Bungees.

More to come as I get bored here at school.

BritNerfMogul:
QUOTE
We should respect the people who make our blasters. Even if we do molest the hell out of them...

Ciao nerfers! Its been a while since I've posted here.

oh and never trust a noob with a dremel.

Its the most accurate gun in my arsenal and is my indoor primary.

write up on supermaxx speakers on request.

Supermaxx 1500 tank fix for those whose tanks exploded from the back.
Minimize your 1'' PVC end cap and glue it to the back.
And remember, 4 (maybe 5?) pumps max!

So I recently had my faith in recons renewed after I stopped by a goodwill, this is what became of it; a Warhammer 40,000 bolt pistol

I made the back psedo-stock detachable by cannibalizing an existing recon stock:

Yes, I know my paintjobs suck, never was good at painting the miniatures either. I also hate realistic-painted Nerf blasters, but this is probably the only exception for me.

EDIT: I only did an AR removal for the innards, I refuse to do anything else because 2 recons have already died on me due to plunger tube failure.

Triple Strike tank fires 4B missiles far. The inside is a maze of tubing that you really don't want to see.

Pay no attention to the ghetto-fied chopper from my OG modding days, it was close by for the pic.

Just a little update on my Mega Missile...

OPRV had to be plugged as it was releasing all the air from the tank for some unexplainable reason.

Mod party as previously defined last night. It's incredible that I was productive for one week; it's even more astounding that I managed to get MORE things done!

It's a trigger that pivots along that screw on the bottom, hitting the lever on the 4B's pin. It dumps air SUPER quickly, more quickly than any of the other 4Bs I have. Supa' nice trigger feel on it too.

Ryan will now demonstrate the optimal barrel for it.

Ryan named it Peepee. It's fitting.

Big Salvo tanks generally don't seem to work with consistently hoppers, no matter how many pumps get put into the tank. But this one does!

Supa' 'spansion. It works excellently. I'm debating making another larger one to use for a semi-auto airgun of sorts.

For reference, he's another BS tank.