You may want to add "difficult to move" or "keep away from small children."

Actually, just for fun, you should paint on instructions like Halo's bazooka has. : o`

EDIT: not the snap I spoke to you about rork.

That mistake was pointed out...twice...three years ago...to a member who was subsequently banned.

That mistake was pointed out...twice...three years ago...to a member who was subsequently banned.

Hehe, funny picture. BTW: sorry. It was late, I was tired, and I was pissed from a long day.

Here's mine, the ZIP Weapon (zephyr inline projectile weapon). Made to look like a cheap zip gun, it works like one, too, 25' flat, it's been losing power for some reason though.

A couple of things I've been working on for the longest time but never bothered to upload. There won't be more of this until summer, because I'm back at school again................

First, a revision of my pump-action magazine fed homemade from about a year ago. When I first designed the gun, my intent was to make my own magazines out of folded steel flashing, music wire, and PVC, but the process turned out to be much too time-consuming and hard to repeat consistently. Even though the shells were cool, I didn't feel like making and picking them up all day, so I decided instead to use more widely available longshot magazines.

This was made about a bit over month ago, but I didn't have easy access to a camera until a few days ago. As, you can see, there were some slight changes in design from the CAD stage to the fabrication stage, this was due the impromptu addition of random features such as the folding stock (just for badassed-ness) and my not knowing exactly what all I had to work with. The stock is also padded for user comfort, while cocking that massive +bow spring back.

Same as last time, this gun was design with ease of fabrication and mass-production in mind. I incorporated a threaded adapter on the front of the gun for quick and easy barrel swapping in order to accommodate different styles of darts, and although it is not seen in the 3d model (in order to save time), the barrel mechanism is also spring-loaded to provide a more positive seal around the conical bolt face.

Other features include the threaded plug at the rear of the reciever. This allows the spring to be easily removed or swapped out and also allows direct access to the internals for the application of lubricant (I use air tool oil). In this design I used cup styled seals for the plunger and bolt involving neoprene washers sandwiched in between fender washers or PVC for a much better seal than o-rings due to the slightly uneven nature of the inner pipe-surface. When I go back home for the summer I may just build add a bayonet mount and stick a full-sized foam sword on the end just because. Then the gun will be a freaking monster.


I know someone will ask about RANGES so here it goes:


I used a +bow mainspring, almost fully compressed (really hard to do), and over a foot of nice and snug fitting barrel for my darts.

Some of you who actually read may have seen this before, most people I expect probably haven't

Reusable, operates with a precharged pressure chamber in the tail section and a replaceable burst disk (see threaded coupler). Relies on a frontal impact kind of like the scatter blast, but more sensitive and with MUCH better spread (15-20 ft all directions).

It carries a payload of 32 nano-darts, and since me and my friends play with homemade felt scoring vests and homemade velcro darts (to eliminate really dumb outs from hand and foot shots and for more positive in/out status), I've begun loading these with velcro tipped nano-darts.

The finished launcher will fire the grenades rear-loaded with foam cup sabots. It will also have a ridiculous amount of pressure restriction so that it will never reach harmful velocities and if anything, the grenade weighs less than a football and is much more padded than one, so if you've ever been hit by/caught/etc. a football before, you should be just fine.

The revised design for this will have enlarged fins, a slightly longer tail section, angled barrels for better spread, and foam coverings for ALL exposed PVC.

I might try and incorporate a matched RSCB spotting gun into the final design just for kicks and maybe to operate almost as a secondary fire function, but I won't be able to do anything until summer, so only time will tell...........

Haha, thanks. I'm glad you like my stuff, but quite honestly I'm nowhere as good as him.

What kind of trigger are you using on that Azn?

Holy crap that's huge?! NFL QB's should be equipped with shit like that!

My homemade ball gun... It's taken me a while to get assembled, and while it is not yet complete, it is usable in its current form. The barrel is a little long for war use, but that's because I was testing it at 120PSI and needed the extra length.

Anyway, depending upon pressures between 30PSI and 140PSI, I can get between 50 and 150 foot ranges. Honestly, I think I need a longer barrel for anything over 100PSI. Or it may be terminal velocity for the balls. Eventually, I am planning for this to be part of a system using CO2 to recharge (and warm up) the main tank, which can then be used to shoot a ball, or feed an air powered dart blaster. That's why I constructed the whole pressurized section from metal. No exploding plastic here... 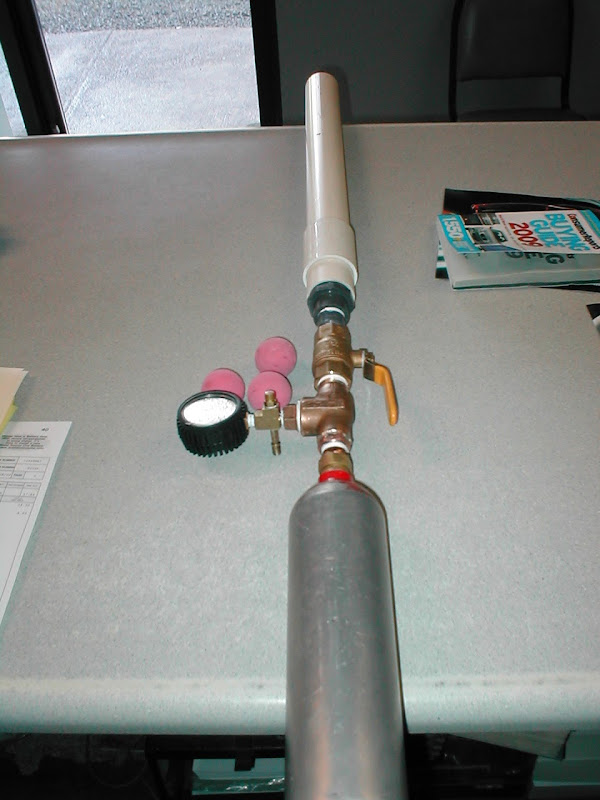 my new homemade no name yet

Ranges: Way over 50 ft. Havent got an accurate range

I do have a hole in the bottom now, I can leave the barrel on now. Which is a breech made by Dragonconis. GO DRAGONCONIS!

slide out the PETG.

put a dart in and close'r up.

there is a 1/2 inch ring of CPVC at the end to prevent darts from falling out the end.

I can also blow darts down the barrel, or slide them into the cpvc at the end. the breech hooks into a PVC coupler.

Not completely airtight, but almost there.

Not bad for being made 15 minutes after my first ever shipment of PETG arrived.

Just started using integrations on my +bow and I'm fairly happy with the results.

If you intend doing one of these integrations, the templates for the brackets are in the DIY +bow thread.

Here's some thing I jsut finished. I wasn't sure where to post it so I'll post it in both.

This was a perfect mate with CPVC with a lil' sanding on the CPVC part. And the slots were made with a drill and rotary tool. Also, Thanks CS for the plans and design!

My SNAP-Twin, it's holster, and the barrel quiver. Based around the same idea as Carbon's SNAP-Duo, but built a little differently.

Finished up the first of a bunch of commissions.

2 check valves. Nothing special here. Client has yet to specify open tubing or built-in barbed connectors, so it is open tubing for now.

A 2-step trigger (different client) is currently curing. Will do a battery of tests and, barring any problems, ship it out in the morning.