32 replies to this topic

Nerf happened, fun was had, taco bell was eaten, and shit was shot.
So basically I had a good time. Thanks to everyone that showed up, and a special thanks to Eric for lugging all the equipment around.
Pistol Territories might be the best game type devised.

Nothing much to report, all the rounds were super solid and some were really close. (except for offend the core, where team VenomSonAvenger unloaded the silly, stock, and shotgun ammo for massive bonus points!)

Edit: Forgot my team totally dominated carpe also, but we had excellent defense and got really lucky on offense.

I loved that war and thus I have things to say.

+12 people was a great number of people.
+A third of the attendees were guests, many who had not been to a war before, and they all brought it 100%. THAT is how shit gets done, nice work Eik, Wilberman, and JudeWolf.
+Every team in every round was fair and balanced due in large part to strong effort and participation from start to finish. Oh, except for 4-team opposite-crisscross Offend The Core: Team VenomSonAvenger slapped more nuts than an angry pimp in an insane asylum.
+Silly ammo for DTC! So much Silliness, so many over-powered blasters used!
-Sorry to every who I shot point-blank with my HAMP

I will self-regulate better next time.
+Re-DICK fun rounds of CTF, I have never seen the flag change hands more times in one round before.
+Small Territories bringing back the joy of pistols.
+Holy ballsacks was it fun to see BustaNinjulian.
+Venom getting a handy from a homeless dude for pay-phone money.
-My unbreakable UMB broke, which was the only blaster I had that supports a shield.
-Switching blasters and getting tagged like 6 times because I reflexively try to block with a shield that was not there.
+The Flesh making a return and performing like a champ!
+Strong dart sweeps between rounds and VERY effective field clean up thanks to Venom's direction, plus we were all near each other and got a solid 25 minutes of conversation time.
-Sorry your car broke, Dirty Dan.
+Construction Vests shine as superior team marking equipment.

I'll have pics up soon, got some good group shots. Thanks for a fun war guys, I am satisfied.

That was a great time!

+Sceptor+Reballs continued to be an unmatched combination.
+/-The VenoMaxx didn't catastrophically fail, but I didn't use it much simply because it couldn't compete with the Sceptor.
+Nerfing with Julian for the first time in nearly a year and a half.
+Very nicely sized war for most of the day. Not too crowded, yet not inadequate in attendance.
-Getting owned in the Vets VS Noobs round because all of us vets are old and slow.
-/+Stark not showing until the war was over. I give him props for still making it at all, however.
-Dirty Dan missed most of the war.
-Atomatron and a number of other regulars weren't there.
+Amazingly not having any problems with park security/police. I always thought Newell was absolutely a no Nerf zone during the summer, but this war proved otherwise. I think our placement in the park and minimization of sketchy behavior assisted this.
-I, like Erik, apologize for any dickish close range shots during the Offend the Core round. I'll have to find a way to tone down my Sceptor for such rounds or just use a different blaster.
+Seeing how damn effective melee weapons and shields are, particularly at smaller wars like this. It always astonishes me.
+Perfect Nerfing weather.
+None of my guns broke.
+Reminiscing about past Nerf wars with Julian and Derek.
+Landslide victories in both Carpe and Offend the Core.
-It seemed like nobody was trying as hard as they should have in Offend the Core. Almost everyone not on my team was using low ROF blasters or melee weapons, which are generally THE WORST weapons to use in OTC.
+The war started earlier than I expected, so we were able to get most of the war in before lunch.
+Acting overly aggressive/authoritative whenever I felt like people were being lazy. Don't take it too seriously, I just like to bring out my inner Drill Sergeant sometimes.
+Having lots and lots of darts by the end of the war despite having to share with Julian.
+My two major contributions to the war were very successful. The use of safety vests for team identification was vastly superior to flagging tape, and undoubtedly made us look less suspicious to bystanders (assuming they realized we weren't construction workers playing with toys). My plan for systematic dart sweeping appeared to be a great boon for recovery amount and used time much more efficiently.

All in all it was an awesome war. I'm looking forward to the next one, and I'm hoping that someone besides Erik or myself could take up the reins and host a war in September.

Lets start of with this gem.

Long way to the objective... 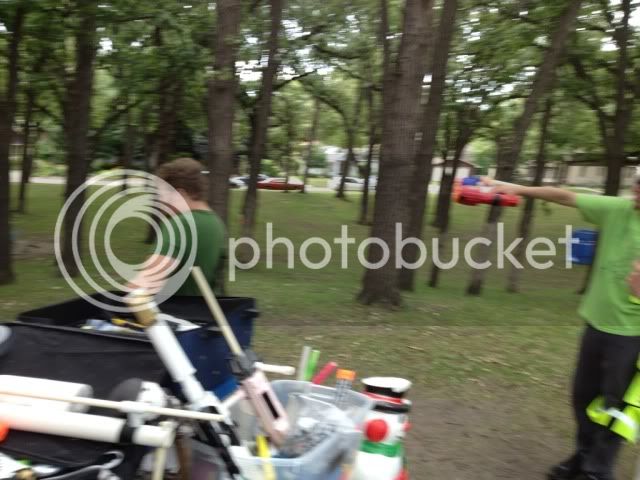 This is how many different ammos we had. Twas glorious.

+I was able to mod up my new Sceptor the day before. Morgoth Bauglir pwnd.
+TEAM $WAG reppin’ hard with SlamNorman, PJ, and myself. Missing one member cause he was sick.
+TEAM $WAG uniforms¬– with patches!
+Hatchets were fun. Awkward to throw, but light & short enough to remain harmless.
+DEM VESTS, MAN
+CTF will always remain my favorite gametype, and was for my crew.
+Owning in Vets/Noobs CTF. Noob status!
+Got some good ideas for blaster projects, hopefully can complete a few before Hellaween.

-My teammates had to leave for work when we broke for lunch
-I kinda hate airguns, at least mine. Too much pumping, too much inconsistency.