This is the NerfHaven profile of Northeast Designs. For more info visit https://www.facebook...p8OwIso&fref=nf

My bbb. Re-enforced catch, stock+recon spring, reenforced disk, ect.. Bbb plunger tubes have almost the exact OD an 1in PVC, so i used a 1in to 3/4in reducer with a CPVC coupler in it. Shown with my shitly made homemade hoper clip, also, i found the top rail frivolous.. 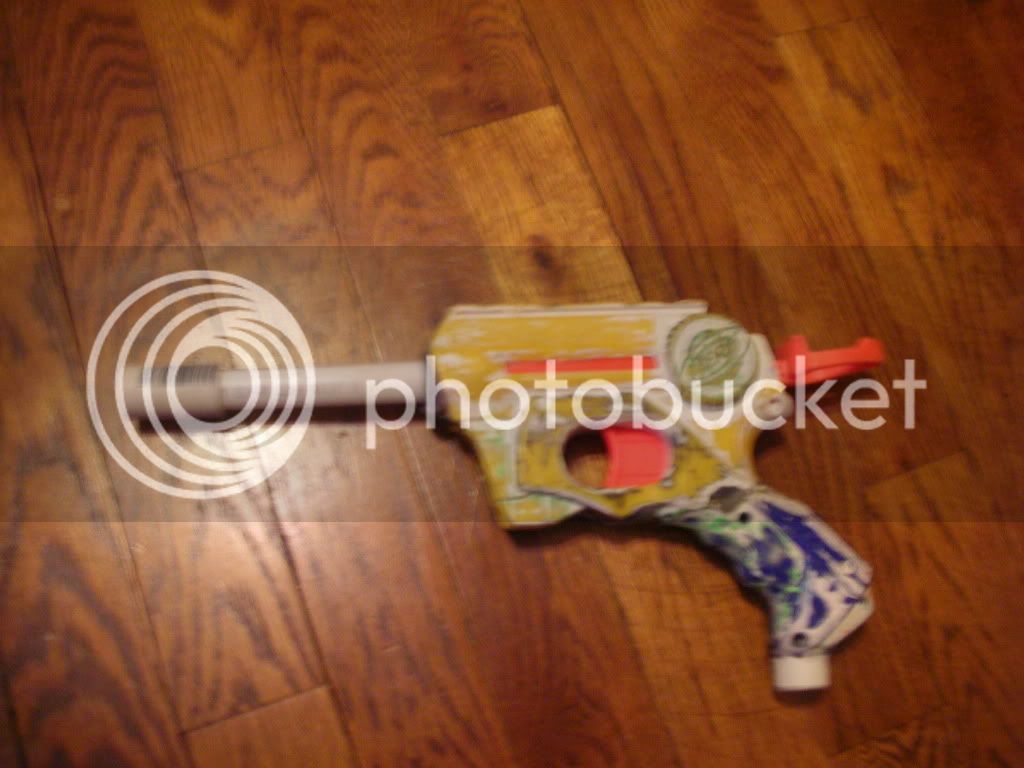 My SnapBow. Has a custom Cpvc breech that fits in a Cpvc coupler.

I had a little fun. Yes, that's a big blast on a triple strike.

I FINALLY fucking finished my longshot. It used to look like this: 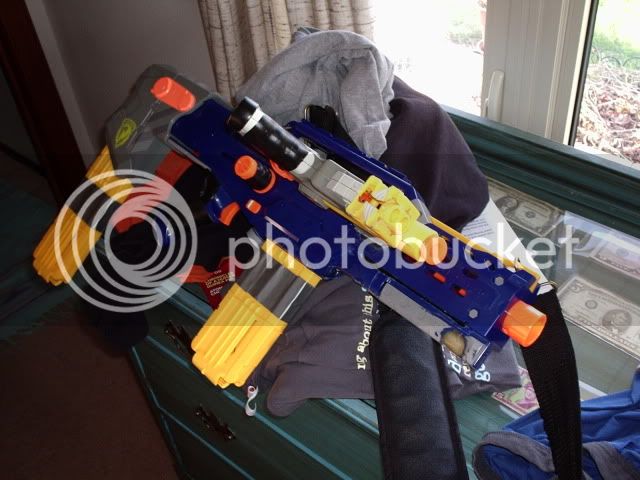 I reinforced the bolt sled with 2 layers of fiberglass, added a heritcorp style plunger head, added an AR-15 spring segment, removed the ARs, lubed the plunger head, plugged that random hole in the stock breech, added an internal 6'' long 9/16'' barrel, added a shotgun grip, added a special nitefinder mount, added a sling, added foam to the handle, reinforced the handle, cut down the bipod and fiber glassed the open holes in the shell, removed the jam door, jammed the stock, removed the clip lock, added a small flashlight, and added a glow-in-the dark sight.

The only thing that I didn't do was replace the stock breech, but I don't really need to. gets ranges of about 15 steps


what I used to make this mod:
Cannabis
DXM
Oxycodone

I call it the "know your limits"


In all seriousness guys, I'm kicking the DXM and codone for good, but I'm not going to lie to you all and say I'm going to stop smoking cannabis, cause I'm not. I'm no addict, but I'm not a straight edger who's going to aggressively push my values on other people as well like some of you cute little kids.

Don't do drugs and all that jazz

Thanks to those of you who gave concern and wished me well. I'm gonna be on painkillers for a few days guys, so I'm gonna be doing a lot of rest and sleeping.

people who I was doing business with, I'm getting all this shit together and ready to go. I'm /sincerely/ sorry for what I've done during transactions between you all, I can't take back what I did, but I have given ALL of you a few extra things in your packages to make up for this time.


I love you guys, nerf on. inb4 pathetic homophobic comments<3

Mod party results. Attendees: Myself, Busta, and atomatron. atomatron did most of the modding.


Doubleshot. Gets about 60ft.

Bladder has 4 layers of inner tubes over it.

Close up of important part.

The bladder runs to the push button valve from the MS trigger, which runs through a hornet check valve and to a 2K tank. It takes about 25 pumps and can get about 15 shots off of a bladder full. It works fantastically with a rscb or hopper clip. Pm me any questions.

Cause' i'm using the turret for something else, and this thing chucks balls farther then your NF.

It's a furyfighter AR removal and painted I call it DC Decimator.

Some of my best work yet, it does need a little touch up though: 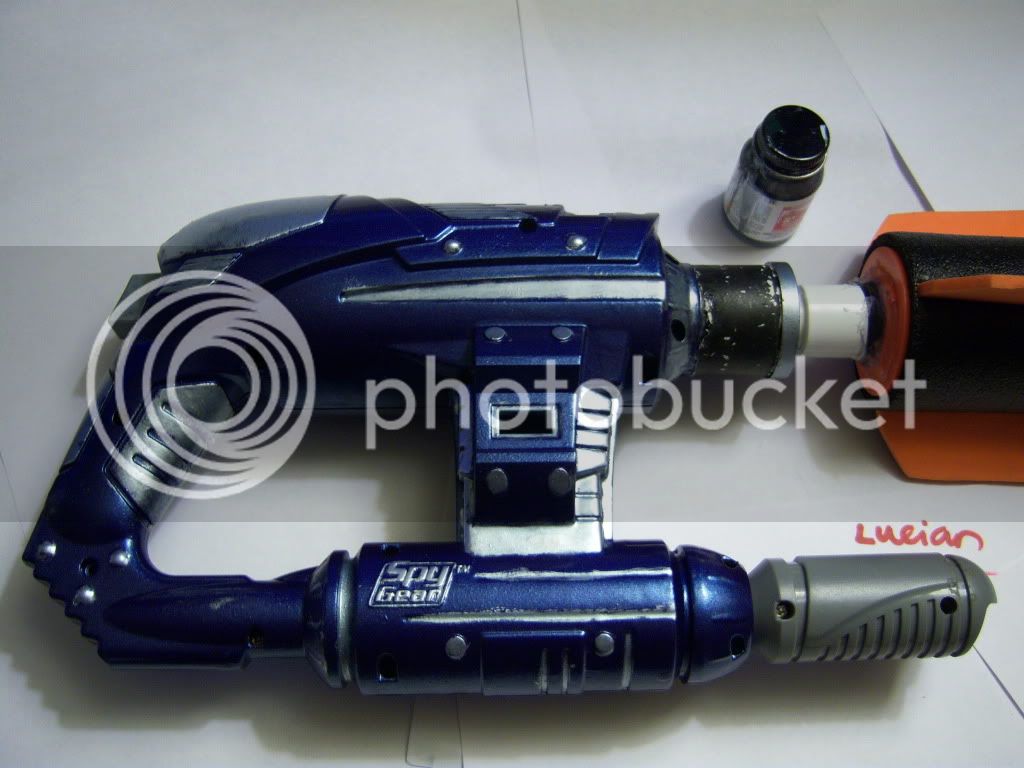 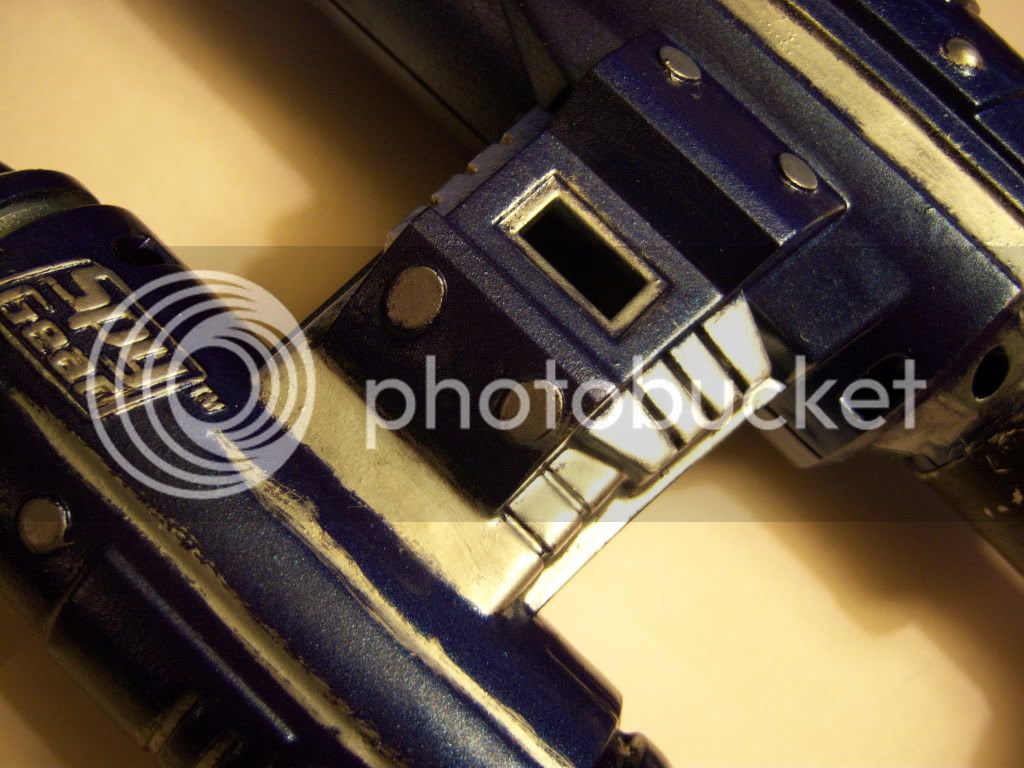 It shoots just as far as my old one, the only changes:

-Stock spring with [k25] spring instead of a BBB and NF combo
-Better plunger head cushioning
-Completely solvent welded together
-Due to the use of polyester; the seal is not as good
-Less epoxy putty


Link to the original topic This is my painted and Modded Longstrike CS-6 I remover the ARs and modded the stock so it would be removable.

I chose red to match my custom Maverick

The Sgt. Steampunk Double Shot. This is my first "mod" It's only a paint job as I didn't want to lose the ejecting shell feature of the double shot. And since it is a more recent model I couldn't access the springs without cutting the cylinders open. I'll be using it in a Steampunk LARP and I don't foresee really needing much more than a 20 foot range for the shotgun. As soon as we finish designs for the magazine I'll be posting the Rapidfire pics as well. A very general write up on the Double shot can be read on: http://sgt-steampunk.blogspot.com/ Why these blasters are awesome.

-
An old Recon PJ I'd totally forgotten about... Just dug it up by accident. LOL!

I bought this blaster from Thaygor after the last war that the whole Kentucky clan attended as a project blaster. About three weeks ago I finally got around to rebuilding it. The most distinct part of the blaster is the homemade plunger rod made out of 1/2 in cpvc, 2 cpvc Ts a cpvc endcap a homemade plunger head and a random screw I found in a parts bin.

Modifications done are
-Homemade plunger rod.
-Added a ½ pvc stock.
-Added a tech ten turret with 10in cpvc barrels.
-Added many catch springs for the homemade plunger rod to work you need many of them.
-Integrated Strikefire.
-Air restrictor removal to the strike fire.
-Although originally minimized by Thaygor I did take it further to make it more comfortable and to fit the Strikefire.
-Added a night finder spring.
-The Strikefire has a maverick spring. Started working on a 1500. Waiting for the epoxy putty to cure for the turret.

Daniel Beaver even showed up.


Both of these guns are a WIP for a contract I am currently working on.

Join The Revolution!
Back to Modifications · Next Unread Topic →