My first nitefinder. Had no handle, now it does(bbbb handle). Super minimized.

^The original mega mav revamped. In the process of taking of the 2'' pvc and putting on inch and a quarter. Scatter shot and sm3k pump (5 pumps to glory 8 pumps to scary power that I'm not useing because im scared to break my blaster ya know one less and all that crap)
This isn't a nerf gun but is a sweet t-shirt design I'm making.

PS. How can you keep the DTB's cocking mech. from chipping away paint when you pull it back?

Just finished this a few minutes ago. It's a hand cannon with a firefly turret.

^Looks awesome. I'm liking the shotgun attachments. I'm assuming those would be helpful during DTC rounds^

Got the idea from zorn's BBBB above awhile back, and decided to make my own. Hole in the front was almost perfect...missed by a little bit:

The pump I used is a bike pump and a little smaller than Zorn's, I believe. This one's dual action though, so it makes up for what it lacks in volume. I use 7-8 pumps. I've pumped it up to 12 before, and probably could pump it up more than that, but I really just don't...7-8 shoots pleanty far. Speedloader's new, suggested by Zorn. I usually use 4" of 17/32" in 12" of PETG, but I tried this out, and it hits better at 7 pumps than the other at 9.

In both locations, tubing had to be twisted in, so it was first superglued in place, then covered with a layer of goop, then 48 hrs. later followed by epoxy putty. Tubing's joined outside with the barbed adaptor. No glue or anything. Holds up just fine. mine's just external simply because it makes my life loads easier, and if I ever want to remove the tank, I can muscle the barb out of the tubing. If it were a continuous length, it'd be stuck because the pump is fixed.

Detatchable, adjustable Firefly stock. This portion makes this blaster one of the most comfortable I own. There's a coupler secured to both the gun and the stock, so I can use different lengths of PVC to suit different blasters. This is all I really have though so far that I use it on, but I'll definitely be making some more blasters to accept it.

Again, credit to Zorn for the original idea, and a great one, too.

EDIT- Yeah, those are my basement stairs, I know they're kinda dirty.

Woot, now it's not a double post. Looks good, btw, but you already knew that.

My rearloading 3k. Now made to accept my Firefly stock. I also re-did the seal, and it fires a lot harder now. I'm guessing around 140 with good darts. It was tagging 130 before.

I use the stock upside down on this one...just more comfy for some reason.

New rearloading slot thing...much better lined up than my original one. Works a lot better.

Hopper Clipped 2k. The clip is fixed (not removable), and holds 5 darts. Hornet pump. Only a little external tubing...looks a lot cleaner without the wireloom, but I put it there to protect it. Goo guage is drained but not removed. Shoots pretty hard. I like it.

End cap with little flap made out of e-tape so it doesn't fall. Also, the etape keeps it from slipping all the way on, so it's still easy to just pop off with my thumb.

I never was too keen on the Raider's front grip... 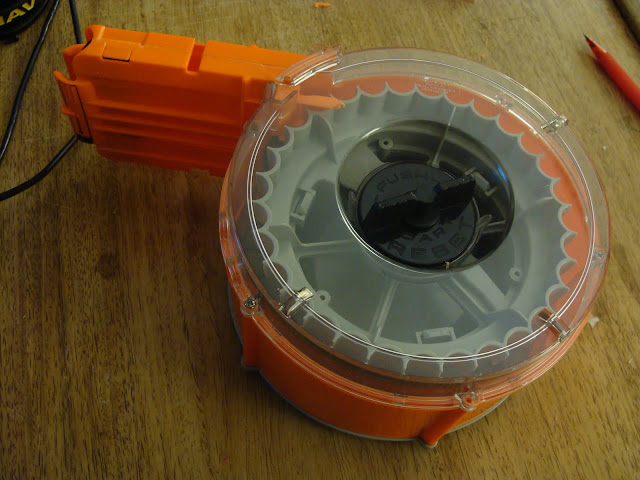 One of the splat series. CPVC coupler and padding added to the plunger header and spring rest. Removed part of the barrel tip.

I don't have ranges as it was snowing and it's night time.

And here's a tip. Need a half coupler? If you don't want to spend time cutting up a full coupler, get an end cap and drill a hole through it.

Make sure to make the hole smaller than the original hole so that the pipe doesn't go through. You can see in the picture below the ridge in the cap.

HAH FUNTIONING 3 SHOT CLIPPED SSPB! I have a write-up, go check it out!

Base coat #1 on, lots of wet sanding needed. Bondo work was extensive, but will be worth the effort in my opinion when its finished. Finished shots by weeks end......I hope!

My rear-loading PETG SM1500. I used Ryan's idea for a PVC stock and for a new pump (though I used a Magstrike pump). Also, Ryan made the spacer.

If you have any questions, comments, or suggestions, feel free to PM me. Thanks.

What happens when you mix me, pvc, petg, sandpaper, files, and a hacksaw

Fucking REVOLUTIONARY! In that same vein I'm going to post up something I came up with at the last mod party for sole use on the DBNFIGZ<3P. I call it:

Got your barrel, right? Get it in some PVC.

Throw a BUSHING on that bitch. Rad. Look at that plunger head.

Then you jam that PVC INTO the bushing! Yes, you read and saw CORRECTLY.

Not only THAT! IT'S FUCKING UNIVERSAL.

The DBNFIGZ<3P breaks one hundred with the BRISC and one ten with the hopper. Barrel is too long. Shoots streamlines like a motherfucker, though.

Variety is the spice of life.

I altered my breech to work on my brit bow. Previously, the opening was too far inside the shell.

PAS, following FA's 'Rambo' mod or whatever its called. LS spring, gets 100+ feet. I lost the stefans so I can't be absolute certain. Also broke a decoration off the wall by mistake with it, oops. It's not what you think.

Can the jobar and cobra do this?

@ numat49: secrets don't make friends. They DO however get you torchered by russian eco terrorists.
Aslo PAS = way better than doubleshot! But in all seriousness a rapid fire would be crazy to weild.

'tis a green, decrapified Mega Missile. Decrapified by rork, turreted by me.

My new raider
it has a super clip, ar removal, custom sight, and a old nitefinder spring in the back.

The RF20 is fired using the Hornet trigger on the Titan...... Dont ask how I did it because I wont tell you.....Unless you are cool enough!

The RF20 is stock and the Titan is singled and NOT plugged because this is a Christmass present for my 10 year old brother.

It will also be integrated woth a RF20

It will also have a write up by Christmass

My office. Yes, my boss knows.

All but the Recon are modded. For some reason, my coworkers don't want to get into a Nerf fight with me...