44 replies to this topic

Wow, this is genuinely impressive. I'm not sure now if I want to build "Fun Size v2" (my new airgun design for balls) or try and build an extension spring snap. Why did you have to make it so hard!

EDIT: I'm gonna build Fun Size first, I just realized I have most of the parts here. But your design will likely be next. Thanks!

Ahtanie built a collapsible stock that might be useful here.

You're using different materials, but the basic design should still work.

If you wish to post anything HvZ related, here ya go.

"...if you've ever suffered the effects of a fucking faggot retard overpopulation, you'll understand what devistaiting effects it can have on one's psyche." - Talio

A new tab and a screw under the plunger tube... 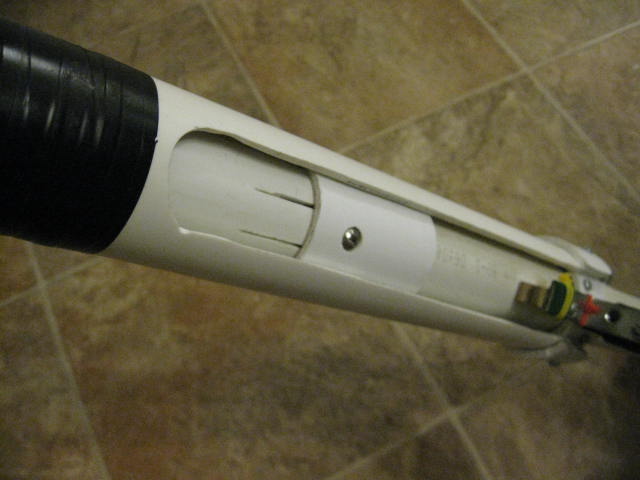 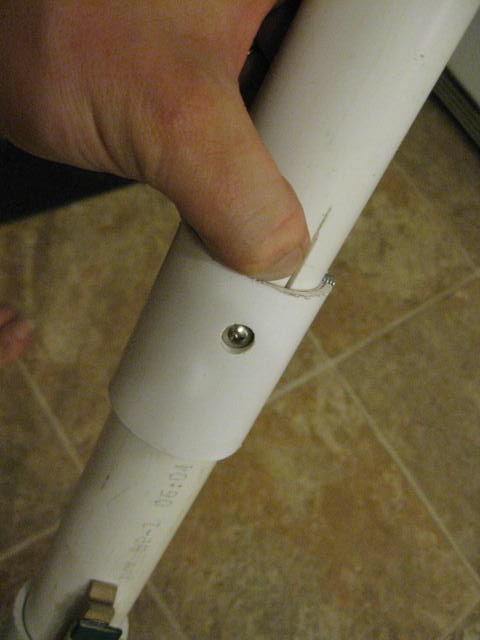 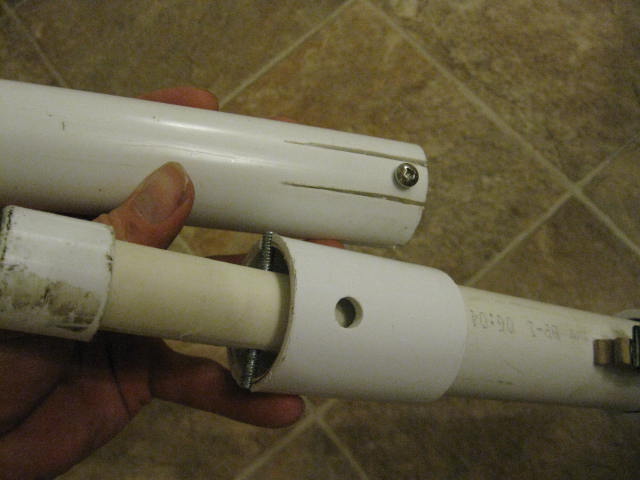 A side view of the tab: 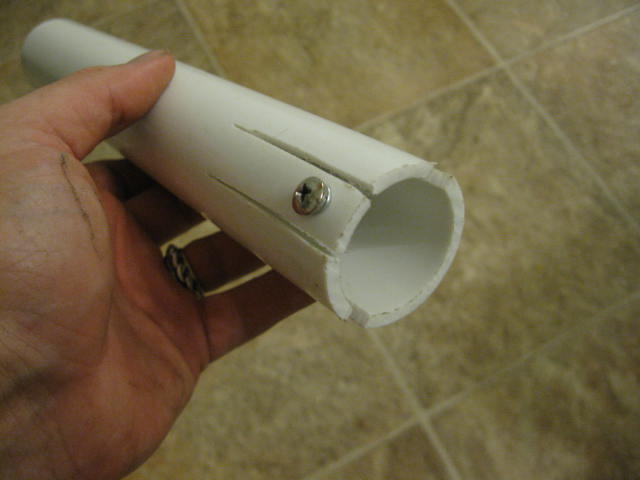 The cuts that makes the tab needs to be widened, as the ends of the tube squeeze together when it's in the coupler. The screw is just a wide pan head screw, with a couple of washers underneath to raise it up a bit higher. When the plunger tube is pushed into the coupler, the screw then pops up into the hole (which is drilled slightly larger than the screw head).

The process for making it:

1. Drill the hole in the coupler where it should lock into place.
2. Push the plunger tube into the coupler. Place a dot in the middle of the hole.
3. Pull it out and drill a pilot hole for the screw.
4. I used a small hacksaw to cut the long slits. Go slow and keep them straight. Go back over the cuts to widen them.
5. The screw needs to be shortened a bit, or it will hit the plunger.
6. Add the screw and a couple of washers. Done.

I actually played around with something like that before I settled on the clip, Bob...only difference was that I was trying large holes cut in the sides of the plunger tube, so I could reach down and set the spring with the plunger tube on, plus hold the tube in place with the spring. It ended up being a little too difficult to get hold of the spring (like you said, I would need a special tool), so I abandoned it.

I still have the issue of needing a tool to initially set the spring, but that doesn't bug me too much. If I have to remove the spring, I'm probably going to need a tool for something, anyway. I'm still looking for a tool-less way to install it, though.

Worked on downsizing the concept tonight: 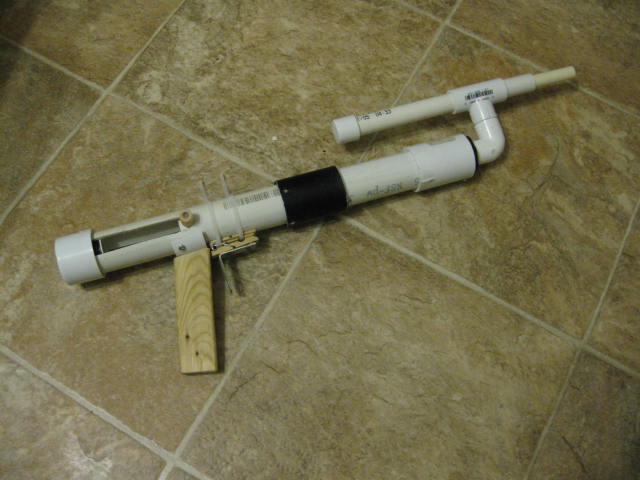 Here it is next to the original: 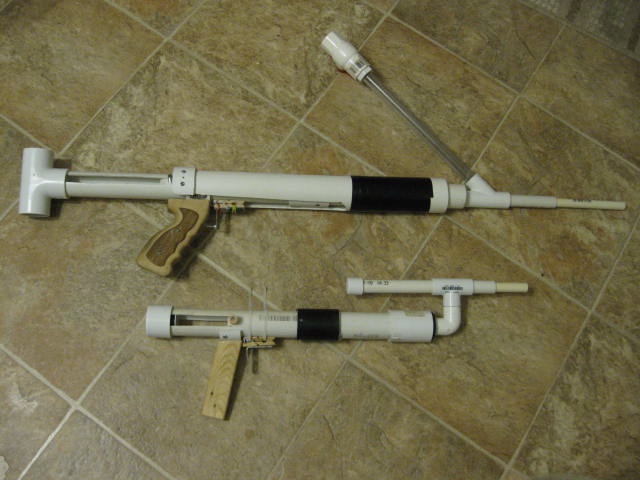 Yeah, it's still pretty long...I should have used a shorter spring. Currently it has a 5.5" x 5/8" x .062 spring, with a draw of about three inches. Not positive of the range (it got dark) but I'd estimate it at about 50-60' with a ridiculously light priming action. However, do not be deceived. The priming catch on this one hungers, and will not be satisfied until it has tasted human blood.

Yeah, the catch is currently ruinous. Been a long time since I bled all over a nerf gun.

In other news, I checked out bell-ended conduit as a potential catch source. The bell has a perfect curve to it, but the dimensions are somewhat different than a 3/4" coupler...it's a little smaller, plus it wasn't really well centered on the tube. That, and it's $1.45 for 10'. It may be simpler, but I'm not sure about the ultimate performance/cost benefit.

I just finished gathering the materials for an extension spring SNAP, and for anyone like me who is looking for the specified spring (9.75" long, .5" wide, .062) but doesn't have a Menards close by, I was able to find the spring at Ace. If I'm not mistaken, it was #64.

"You can discover what your enemy fears most by observing the means he uses to frighten you."

Thanks, Crow. Ace/True Value is my usual source for springs, but they were closed when I had an opportunity to build.

However, it bears repeating: so long as you have a spring which is somewhat similar, it'll swap in with no problems. The only required specification are that it be able to fit inside of .75" PVC, and be under a bit of preload when at rest (so, shorter than 11" or so). While building/testing, I used two springs of different sizes with no modifications needed. Performance varied, of course, but that's so be expected.

This is amazing carbon.

Good idea, but with a trade-off: the good is that it would greatly simplify plunger construction, and makes it really easy to construct a beefy catch. The bad is that it would greatly increase the surface area contact between the plunger tube and plunger, increasing friction. Definitely worth a try, though, as it's a lot simpler than any catch reinforcement method I was planning. I'll do some testing with both versions of plungers and see how they compare. For science!

Extension springs are sort of a brave new world, so I'm not exactly sure. I think they'll work, but you'll definitely want to use a stronger catch than what I'm currently using....they're wider than my spring, but .080 is pretty burly.

What would you estimate the load to be when you're priming? Or better yet, do you have a scale? For comparison, a [k26] is 41 lbs IIRC.

As near as I can find: at the deflection I'm using, the spring I'm using has a pull of about 14 or so pounds.

I'm using a .72 gauge spring, 9/16" by 6" and it feels stronger than half a [k26]. Can't measure the weight, though it says maximum safe load is 20 lb. No damage to the catch so far, but I want to find a metal catchface so it's guaranteed to last.

I built and installed a 1" PVC plunger tonight. As it turns out, the longest piece of 1" I had was thinwall, so that was what I used. It should definitely be strong enough. I didn't use a SNAP Carbine plunger head, and instead used some random pieces of PVC to attach my usual plunger head (as 3/4" endcaps are the same diameter as 1" PVC).

Some thoughts on what I've found so far, both good and bad:

1. Building a plunger in this method is, as you might expect, nice and solid, and pretty straightforward.
2. The catch is ridiculously solid, and took even less tuning than my coupler catch. That's already saying a lot.
3. I'm not positive, but the plunger may work out to be lighter than the original, being all of thinwall.
4. Plenty of room inside the plunger to keep the spring from rubbing.

1. I can definitely tell there's more friction than before.
2. Handle attachment is fussier with a plunger that's right up against the PT. I had to grind off my screws, and remove any of the plastic eruptions from attaching the handle.
3. The wider plunger now means my push-tab plunger tube removal system no longer works. I may be able to modify the plunger tube to make it work, but it's annoying.

The sure catch is pretty nice, but I'm not sold on the overall benefits. I'll do a range test tomorrow night and see if I lost or gained any range. The lighter plunger may negate the greater friction.

Here's some specifics on the plunger variation using 1" PVC. (My old DNS service broke, so all my other pictures are broken links...hopefully it'll be fixed in the next day or so. EDIT: looks like they're fixed.)

Side-by-side views of the old and new plungers: 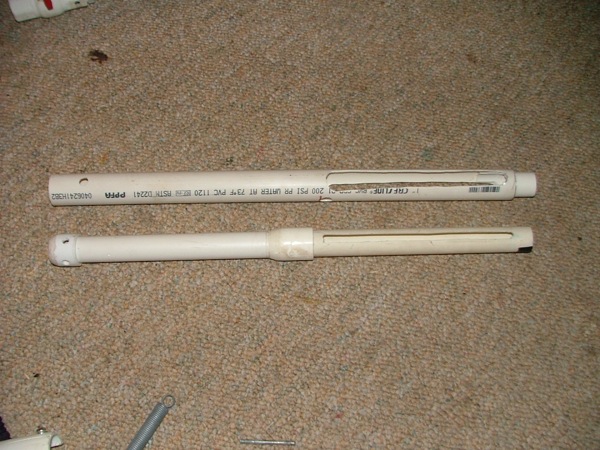 A closeup of the catch areas. I just drilled a hole for the catch on the 1" version, and it worked first try. 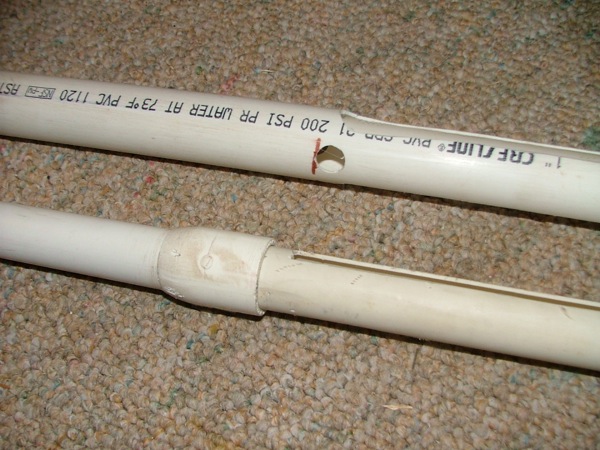 What I rigged up to hold the plunger head in place. It's just 3/4" thinwall with aluminum tape around it until it's wide enough to jam into place. I'm not wild about it, but it works. 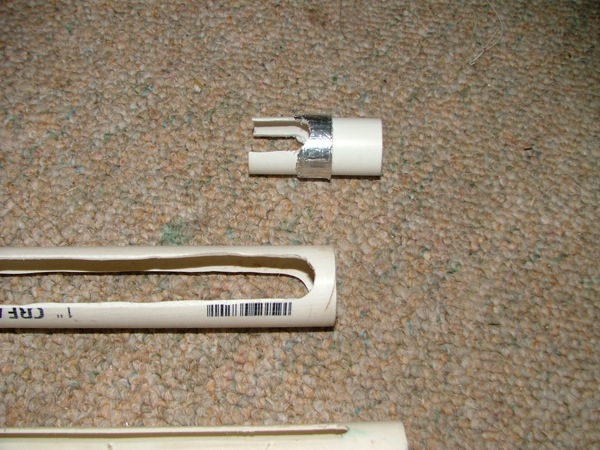 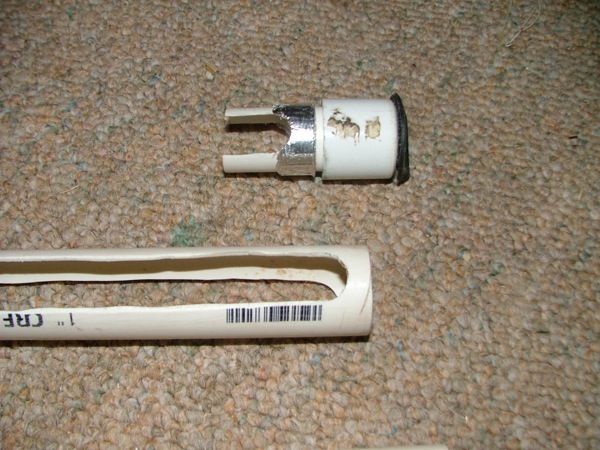 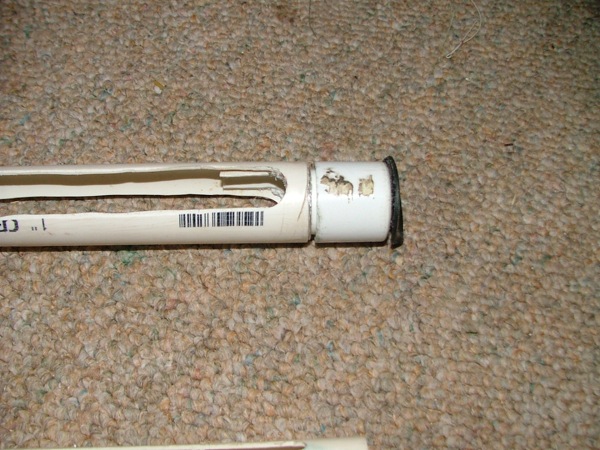 A closeup of the catch area on the old version. Definitely needs some reinforcement, or a deeper catch (this is after three wars). It's starting to be a bit fussy about catching. 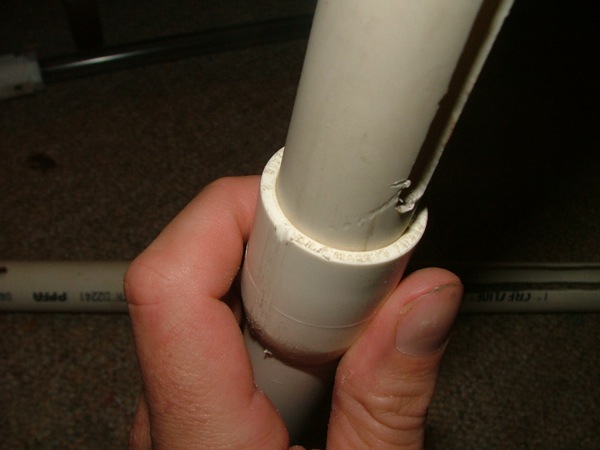 As far as performance, it's been a little too windy around here to really test. I've put a few darts through the 1" version, and performance seems pretty comparable, maybe a little less. Weight appears to be equal between the two versions. The 1" version is a little annoying because of how I've chosen to build this blaster, but I think it's a very viable alternative plunger to the way I did it initially. I think I'll be going about fixing the catch lip in a different way. (Plans are in place.)

Why not do the original 3/4" plunger, but add the hole right after the ridge just like in the 1" version for the catch. This would keep the strong catch but reduce friction from the 1" pvc. You can also maintain the tool-less field stripping capability.

Why not do the original 1/3" plunger, but add the hole right after the ridge just like in the 1" version for the catch.

I have no words.

I added in some slots below the catchface, and it's catching more reliably already. I'll change to a slightly longer nail to take advantage of the deeper slot. The catchface will still wear, but it won't fail to catch even as it wears down. I'll ninja edit in some pics of the modified plunger when I find some batteries.

Why not do the original 3/4" plunger, but add the hole right after the ridge just like in the 1" version for the catch. This would keep the strong catch but reduce friction from the 1" pvc. You can also maintain the tool-less field stripping capability.

Wow. Why didn't I think of that. But I would not use the coupler so it doesn't wear and you don't have to make it.

But I would not use the coupler so it doesn't wear and you don't have to make it.

Well the coupler in a way would actually help it from wearing because the nail is still going to be scraping against the PVC, right? so it makes it thicker so the 3/4" thinwall that we'd use for the front part of the plunger rod isn't the thing being worn down. The coupler would act as a kind of transition from the Sch40 to the Thinwall to make the catch area stronger there so it doesnt wear down. I haven't done this though so it is very possible that not using a coupler at all would work fine.