68 replies to this topic

Just to piggy back on Bob's idea: here's a proof of concept, I guess:

I just took the 45 degree 1/2 pvc section and bored out the inside with a 5/8 drill bit all the way through. You'll have to clean it up a bit with a dremel and test fit a couple of times, but you should be able to get cpvc through there pretty easily. I took a 12 in cpvc section just so I'd be sure I had enough. I marked it around the 7in mark on one side for the barrel and cut about a 1in section into the cpvc. (I didn't really snap pics of that part, but I'll snap some later when I make another.)

This might be able to explain it a bit better:

That black line is the small gap filled in with jb weld in between the cpvc and the pvc section. I use 1.5 in stefans and the first one in line slides quite a ways in there. It goes in pretty easy. I've test fired it as it is and it fired pretty well with my maximizer and my PAS. I haven't perfected it yet since it's the first one I've made. The cap of the clip I put on there was a little loose, so it shot off every couple shots, launching out the rest of my darts. (it was actually pretty funny) I plan on cutting short that section of cpvc at the end and permanently attaching a clip.

In any case, it's a work in progress, but it sure is easier to go this route instead of boring out one of those 45 degree 1/2 pvc slip joints. Those are way more laborious to produce.

58 cents each in the electrical conduit area at Home Depot.

I've been able to blow two inch stefans through them pretty easily.

Yeah, as I sat there rotating my PVC over my gas stove I was wishing my home depot had them; I had seen them somewhere when I lived in a different state. I haven't seen them at my local home depot, but perhaps I need to look harder. The angle isn't perfect, but it's not bad either.

@Cannonball, I'm glad to see that running the CPVC through it worked, I was skeptical when I thought about it, and I didn't have a bit large enough to try, so I gave up on it. I might play with that idea some more later on. Now I'm trying to find ways to minimize dead space and other little things to see if I can squeeze a bit more range out of the lower powered blasters.

Glad to hear it's working on a PAS and Maximizer. How were the ranges on them? Were the close to singled? Good enough to be practical? Thanks for running with this.

Imaseoulman: I'm working on the top most pvc hopper right now. I have to glue the length of pvc that houses the darts in because it keeps getting shot out. Luckily, that clip requires a smaller section of pvc than the other in order to hold around 7 or 8 1.5 darts. That's because that section of cpvc within the 45 degree section is open enough to seat the first dart considerably within the barrel and the second dart almost half way on the remaining section of pvc. I'll post again when I'm done with it.

The second hopper however is getting around high 80's to low 90's from the PAS and high 90's to low 100's from the maximizer. for some reason, that clip doesn't like my converted dart tag darts. they are considerably smaller than my regular darts, but they have a pretty good fit into cpvc. They don't have any problems being fired out of single barrels though.

By the way, heating PVC like that can let off some pretty nasty fumes.

A solution to not having any low-torque ball valves:

The use of two sections here is very much similar to the old RSCB setups where you have an "active" clip section and "reservoir" clip section:

On option for the "reservoir" clip is to use a small section of barrel material at the entrance. This allows you to reload on-the-fly without the annoyance of flap valves. I haven't gotten a dart door to work successfully in my P-AS or Big Blast successfully as the valve just blows out. Same with commercial rubber flap check valves from Flexpvc. Swing valves will obviously work, but then you have to deal with the entire swing mechanism.

If you're pro, you can also replace the section of barrel material with a funnel.

Advantage of the funnel is increased loading time. In this version, a disadvantage is dart sometimes fall out if you tilt the gun wrong and also have a tendency to flip in the funnel and end up going in backwards... and then not actually falling out when you want them to. This seems like it could be easily fixed using a narrower funnel, and increasing the cross-sectional area around where the funnel meets the clip, so that darts falling in are directed into the clip, while darts falling out have a higher chance of missing.

Here is something I came up with over the weekend: the Shotgun Hopper setup.

I've only gotten it to work properly on high power, high output guns (4B, +bow), where "working properly" entails shooting two darts, every time. On lower power (or lower output guns, I guess), it does this:

And so on. I haven't test it with a high output low power setup (i.e. HAMPs) but since my U3 brethren are big into those I figure they can do the legwork on that. (UPDATE: Zorn said it doesn't work on HAMPs. Looks like they were already on this.)

I'll have a video up tomorrow, since by the time I got around to it tonight it was already too dark outside for good footage.

Here's a minor update on a few improvements to make your hopper clips faster.

This is a special 5/8" spade bit Kane happened to stumble upon at Meyer's a couple weeks ago. On a traditional spade bit, there are cutters or spurs on the edges of the bit to give you a smoother bore when drilling stuff. For reaming PVC, we don't want this. This special bit has some strange dimples on the end, making it easier to initially get the bit going into the PVC. It'll also give you a much smoother ream.

Another big hassle for making hopper clips, is chamfering the PVC/CPVC combo for your dart feed. A countersink will help you out a lot. Typically the more flutes, the smoother the chamfer, but also more expensive. You'll need a 3/4" one, unless you can find one 7/8". After using the countersink, you'll still need to do some minor scissor work to make it perfect. It does save loads of time though. 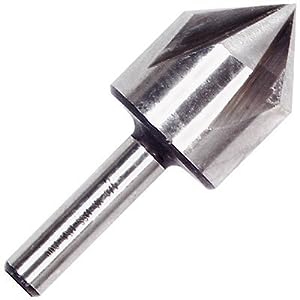 Also, I saw these at Lowes not too long ago. They work really well. Very quick and precise. Link

And it sucks.
The wavyness of the bit makes it basically impossible to start. I usually just slide the PVC over the shaft of the bit, and draw the bit backwards through the PVC.

I have seen these up in Canada at Home hardware.

I used the latter one of these not long ago on copper and it work very well. I did however find it work better in my slower drill, my faster one just beat the crap out of the copper.

And Nerf geek I have the same bit and it sucks so bad I would prefer to use a box cutter then that shit.

That "Special" spade bit that makes drilling out barrels easier can also be found as the OSH brand spade bits. Possibly ACE brand as well.
Otherwise, use a Dremel or file to chamfer out a VERY small section of the 1/2" PVC to allow the spade bit to feed more easily.

If it doesn't drill as easily with the normal bits, drill in REVERSE all the way. This grinds away some of the PVC more slowly, making it easier when you switch back to drilling normally.

I find a deburrer a very good tool for reaming out the dart entry section. Gets the job done in about a minute.

Can't you just file the sides of the spade bits to get it to fit into the barrel better? Cmon guys, this is the Homemades section

That "Special" spade bit that makes drilling out barrels easier can also be found as the OSH brand spade bits. Possibly ACE brand as well.

I have some Ace Hardware spade bits, and they are normal spade bits. I'm not sure if they make the special kind.

McMaster has a 3D model available for wyes, as well as a blueprint with the flat dimensional measurements. It is available here.

.What is better (in your opinion) RSCB or Hopper mag

.What is better (in your opinion) RSCB or Hopper mag

RSCB was first, but hoppers are a superior design (auto-feed with gravity, less dead space)