Haven't been around for a while. Nerfing had been largely forgotten by me for a while. I got into machining, metal casting and other fun "big people" things.

But then I was given a Make magazine and saw their homemade launcher and decided to see if I could combine nerf and my new tools.

The result was a nice single shot pistol. 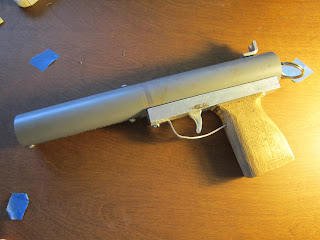 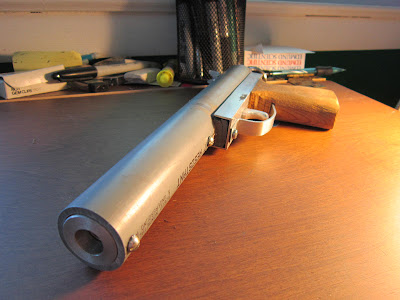 In the next one, you can sort of see the catch. I don't know if this type of catch has caught on yet or not, but a while ago, everyone still used clothespin catches. This catch is simple and dead reliable. A metal plate is just pulled inwards towards the plunger rod by the small spring. Pulling the trigger drives a wedge between the frame and the boot of the catch, pushing it out of the notch in the plunger rod. 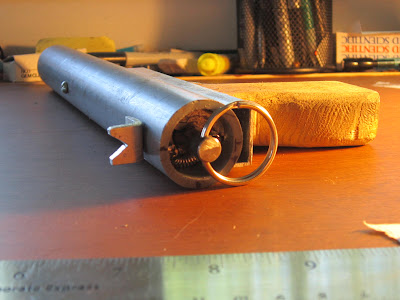 Here is the plunger head and rod. Both were machined by me of course, along with everything else. The plunger is 3/8 steel. The rod is rather heavy, but I used a nice spring and the ranges are great anyway. I have made aluminum rods before, but the catch notch rounds over and becomes unreliable. 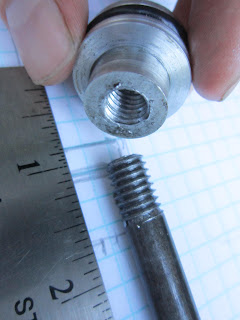 Here is the plunger assembly. The spring rest on the rear later had a shoulder machined into it to center the spring. The mounts for the catch and catch spring are drilled and tapped into the rear of that piece. 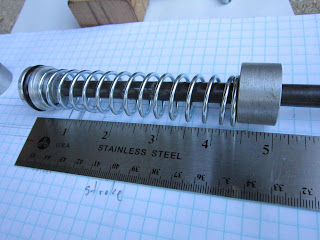 This is the barrel assembly. The forward center is recessed for the cpvc, so on one side I drilled it 17/64 for a dart, and on the other, 5/8 for the cpvc. 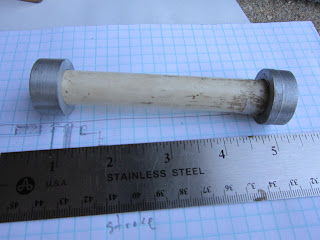 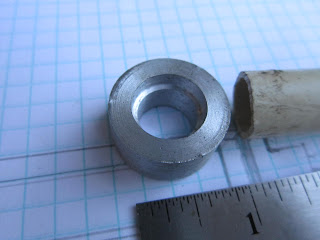 This is the rear center. It has one diameter turned that fits tightly into the 1" outer sheath, providing an airtight seal for the plunger tube to the rear. It was drilled through for the 5/8 cpvc, so that it could be coated with sealer and stay secure. 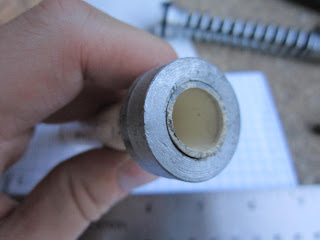 The barrel and the plunger all fit into 1" pvc, which for the purposes of explanation, I will call the upper receiver. This 1" PVC acts as the plunger tube and barrel sheath. It also provides the mounting points for the pieces. 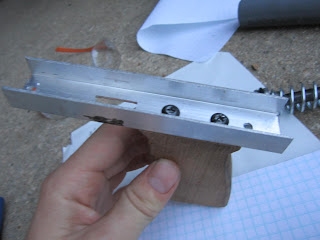 Not much to look at. The grip is screwed on. I replaced those pictures screws with flatheads for the trigger plate to pass over.

Trigger and trigger plate. In this picture, the original mounting rivet was falling out. I re-drilled and tapped the hole for a small machine screw. 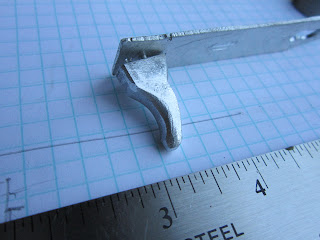 The business end. From dead on, you don't see the cpvc. 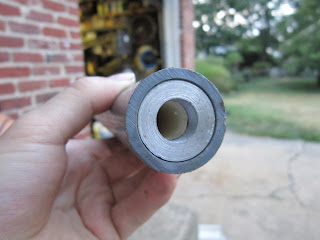 All the centering pieces were drilled and tapped to mount to the 1" PVC. You can see all the screws along the top and bottom of the upper receiver.

The "sight" at the rear is held on by one of the same bolts that goes into the spring rest.

If anyone wants more detail, please ask. I didn't make this a real writeup as you need a lathe to make most of the parts. From all the draconian measures that I see going on around here, I assume many of the users are about 12, and don't have lathes. But once again, if you would like more info, just ask.

I will hopefully have some videos of the range test and construction up within a few days. Bandwidth permitting.

Hey everyone! I haven't been on in a while, so just dropping by. The new site sure looks spiffy! Great job to whomever designed it. I applaud you good sirs!

I have been, for a long time, attempting to make a missile that could be launched from an off the shelf nerf missile launcher and could also somehow disperse darts over a wide area. I met these terms almost accidentally when I taped a cardboard tube onto a BBBB missile, stuffed the tube with darts and fired. This worked, but the range left something to be desired and the missiles popped because of the amount of pumping nescesary to get any distance. I solved this by super sizing the whole thing. It's so simple it's shocking that it works so well, and I don't believe it's ever been posted.(Sorry if it has)

To make: Get toilet paper tube and cut in half so you have two tubes.
Cut each lengthwise and tape the tubes together to make a larger diameter tube.
Tape onto top of missile.
Load with darts( just enough so that they easily fall out)
Pump and fire at a high angle so that darts can fall out.

I like this because it gets a whole area covered with darts and the missile still hits some thing/one, its dirt cheap, and easier than doing a shotgun mod to the titan barrel. I haven't measured ranges officially but I think the missile hit about 50 feet. The darts usually fall somewhere 25 feet forward of you. The scatter depends on how you load the darts. I can get 8 darts launched and have a nice ten foot wide spread. I recently started a new project. I'm combining the airteck 2k tank with a maverick. I had a maverick with a broken outer plunger and a set of 2k internals. The idea was to get the range of the 2k( I know it will be less)
with the cool look of the maverick.

I ran into a slight road block. I had to cut off the goo gauge to fit the tank in. Here's my question- How should I connect the pump hose to the tank? I tried hot glue but it didn't seal. Thanks for the help. I think this may have been done before but the pictures in the post didn't work anymore.

This is what I have finished so far Hello Nerfhaven! This is my first post so I thought I'd contribute something useful.
I have two titans. When the trigger on one of them broke I was annoyed. That little orange piece that fits over the release rod popped off. I diddn't want to use epoxy and gunk everything up and hot glue didn't work so I came up with this. It's a wheel collar on the rod to keep the orange piece in place.


Yes that is my website about tomatos that the picture is on. Sorry I can't figure out how to post pictures. I searched and it didn't help. I'd appriciate advice.

Before I put the collar on, I used a file to make a flat surface on the rod.
This helps give the collar a better grip.

This last thing isn't special but I also dremmeled ou the air restrictors on the front barrel of the titan so I can fire other things and drop in a barrel of choice.

I'm very sorry about the mess up with the pictures. I