In Topic: Nerf "Wars" from Quarantine

Given that your group is concerned about injury with custom projectiles (and reasonably so), have you considered using craft foam for fins instead of cardboard?

Also apparently angling the fins a little bit creates spin, which is good for stability. Might be worth giving it a go.

Side note, have you seen MTB's video on making titan rockets? Might be a good source of inspiration, even if it doesn't fit the goal of interchangeable ammo.

They're all made completely from craft foam and pipe insulation, so the injury risk is pretty low. I don't think I ever considered cardboard; too thick, and it wouldn't make for as good of a seal on the barrel.

Some of the first ones have been made with tilted fins to induce a spin. But if KSP is anything to go by, excessive spinning hurts performance, so it's a little tricky making sure it doesn't go too far.

And yeah, I did stop by MTB's stuff on the way here. I considered hollowing out pool noodles with a Forstner bit on a drill press to get the inner diameter of the missiles to match the Titan's stock 40mm, but that seemed like an awful lot of work compared to wrapping foam.

First set of missiles is done, and they seem to work okay! 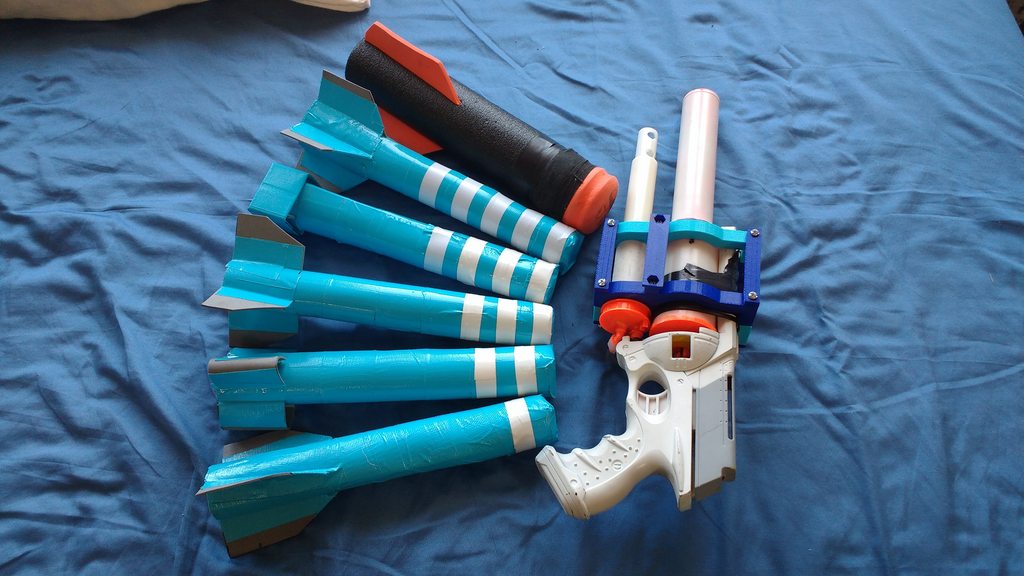 Even that goofy box fin (four stripes) pretty much goes where you point it.

I think my favorite so far is the tube fin (two stripes). Not perfect, but I like how compact and unusual it looks. It'll need more tape on the inside edges to stick better, but that shouldn't be a problem. Might even control the width better.

I've already got some other ideas to try. Double the tube fins, fore-fins, maybe some tricks to try and prevent folding on the seam, maybe a mock discarding sabot... but I have to be a productive adult for a little while longer first.

More updates as they come.

Plenty of people have come up with homemade missiles, and most of them are pretty good. The problem I keep running into is that they seem to require a different barrel size than the stock Titan. That's also fine, but I'd rather make something that won't need an adapter; if I'm going to make such a goofy fun thing as a missile, I'd like to share it with anyone else who happens to have a Titan.

I'm just not too keen on custom ammo for a lot of reasons, mostly for compatibility and fairness:

-It would be difficult if someone wanted to use a blaster that only used something specialized ammo. Someone borrowing a super-duper Stefan-only blaster won't have much fun when they run dry and get pwned by someone with a Jolt and bulging pockets.

-We've had some dust-ups over specialized ammo before, namely a Titan-based scattergun using a PVC barrel full of half darts. Goofy ammo has been a sore subject ever since; it's easier and more fun to stick with stock ammo than burn daylight getting into arguments.

As for weight, I have no idea. I'll check the next time I find a scale. EDIT: The one with the tube fins weighs in around 32 grams.

And it's true, you don't see them often, but not never. We had some rules regarding different ammo types to try and make them more feasible. Otherwise, they'd be just goofy novelties for people to chuckle over before grabbing something more ordinary:

-Micros/Elites - Tag out with a hit to the body, but can be blocked with limbs or weapons.

-Arrows - Tag out with a hit to the body or limbs, but can be blocked with weapons.

-Missiles - Can't be blocked at all.

That was a while ago, though, when the Big Bad Bow was still a thing and the Mega dart hadn't come out yet. I better come up with a rule for that one.

Welp, so much for that. All the printed parts more-or-less fitted together well enough; there was a fair amount of sanding in some spots, but that's the fault of the printer and it being less than user-friendly. But the HAMP parts aren't working. After fussing with the seal, the tubing I have on hand, and pounding on the plunger like it owed me money... well, I'll just say I could probably get my son to throw it further. I knew going in that there was a chance it wouldn't work, but I had to try anyway; nothing more painful than an itch you can't scratch.

Still, it's not all a complete waste. I like how the cosmetic barrel came out, so at the very least it's probably going to get a proper mounting lug and a rail or two.

I'd take a rail-mounted inline blaster just as readily as a HAMP. I thought while walking the dog last night that I should look into salvaging some tired old Nite Finders for that purpose. I think I have the internals at least mocked up already, so it'd only be a matter of making a housing. If that doesn't work, I might use this as an excuse to buy and cut down a SnapFire instead.