I've been playing around with the design of the in-line clip I posted here. I wanted to make it shorter, but not reduce capacity. A normat tee joint is far too large in the middle, so darts get jumbled around. I found the part I needed in the form of this tee: 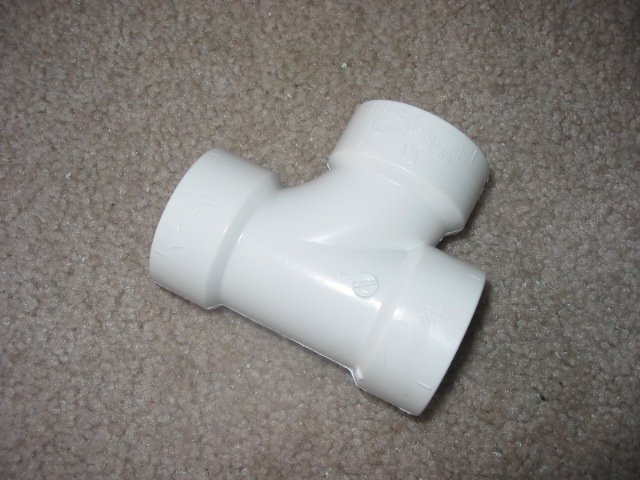 The tee part curves forward, and has a little bit of a curve favoring one side. Perfect. I cut out a small rounded rectangle, put two slits in the bottom, and glued it into the tee. This ramps the darts forward. 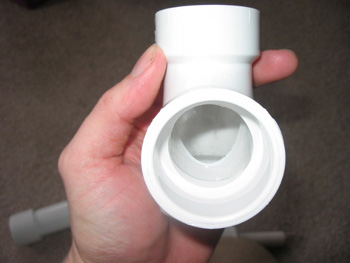 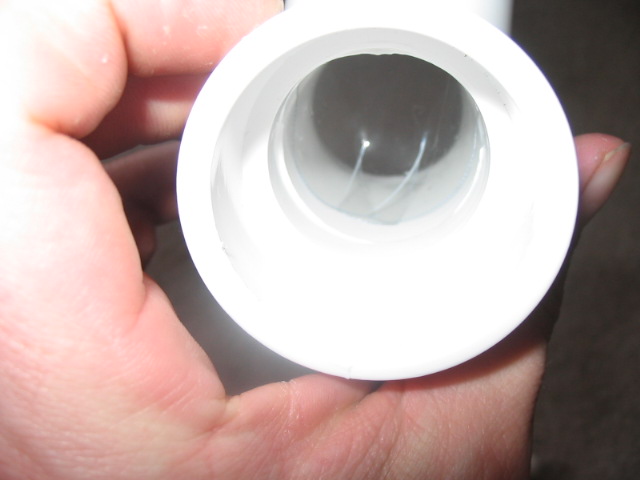 It actually doesn't impede airflow much at all, and acts mainly like a checkvalve.

Here's the assembled clip (using the same barrel assembly from the in-line clip).

The clip is loaded through the endcap. Just so long as the darts are loaded loosely and weight down, they fire fine.

Here it is installed on an AT2k. 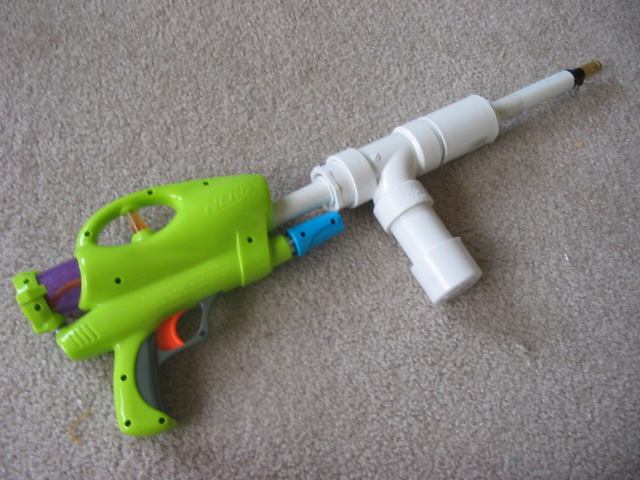 The AT2k is crayolad, so the end PVC slips on. To pump the gun, the clip rotates up. 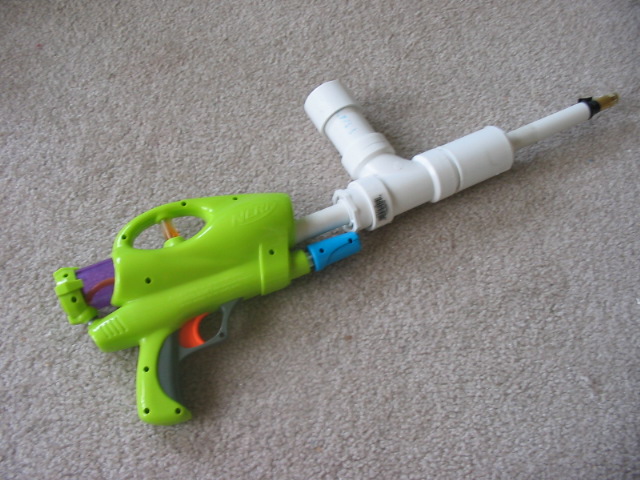 I can load 9 darts into the clip. Point the gun up, give it a little shake, then point down, and fire. I have had no missfires with this system (so far), and the clip provides a nice handle. It doesn't matter what orientation the hopper is in when firing, as the dart that's ready to go is already forward in the barrel. Ranges are similar to the other in-line clip model (about 50'). Yeah, it reduces range of an AT2k, but you get 9 shots as fast as you can repump.

Awesome. I don't get what was with the slits though. Could you explain that a little? How much does it reduce range on the SNAP 3?

The slits allow the plastic to curve and conform to the curve of the tube. See in the one picture where the slits look like they're at an angle to each other? They're parallel, the plastic crosses over itself. I really should have taken a picture before I installed it, but I was surprised that this worked, too...so I didn't document it.

As far as SNAP-3 ranges, I just tested it, and got a one-dart distance of 65 feet. Not bad, considering the dead space being compressed, but considering I just got 90' with it last night after I modified the plunger.... That, and it makes it seriously long, like 44 inches.

To make it easier for other people to find the Tee used in this project it is called a "Sanitary Tee" which is meant to be used with sewage plumbing.

Wow, that is amazing. I love the hopper clip, its sleek and nice, but most importantly the clip capacity is exceptional. Plus no jams so far! Great I love it, I think this is going to be something to be used by others in the future aswell. Also I can't help noticing but that is one hot at2k with that hopper. Maybe its just my taste.

Edit: You could also make pre loaded hoppers, and just slip them in the crayola. You proably already thought of that.


http://www.break.com...iencechild.html
Funniest video ever. This kid needs some serious help

Thanks for the info, CaptainSlug.

Here's an idea as to the size of the SNAP-3 with the hopper clip installed (with a Splitfire for reference): 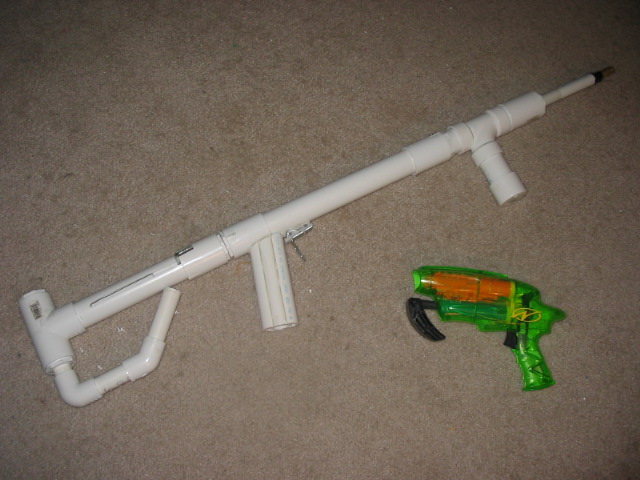 It's not beyond the pale or anything, but it's sizable.

God damn, I feel bad about reviving this topic, but the pictures no longer work, and I'd really like to see what it looks like.

You know, it would have been a MUCH better idea to PM Carbon. He's still active, and he might have the pictures still, and if he did, I could vouch that he'd be glad to share them with you.


The fact that he didn't post much further, and that you don't see his hopper clip on any of his current works tells you that the prototypes probably didn't meet his expectations, so he put it on the "back-burner", as they say.


I'll let this one go since I'm about to drop a couple other members.

I cleaned up my server a few months ago, and broke pretty much every picture post I've made here. I fixed most of them, but I know that there's some lingering ones. So, like Piney said, if there's a broken post somewhere, drop me a line and I'll fix the image links.

This project was a good experiment, but it jammed just enough that you were left with some uncertainty as to whether you'd actually fire a shot every time. Fun to play around with, but I'm pretty sure it'd be a pain on the battlefield. Back to the drawing board...

Hello. I am Indigo of the Rainbow Clan. You Nerfed my father. Prepare to die.
Back to Homemades · Next Unread Topic →