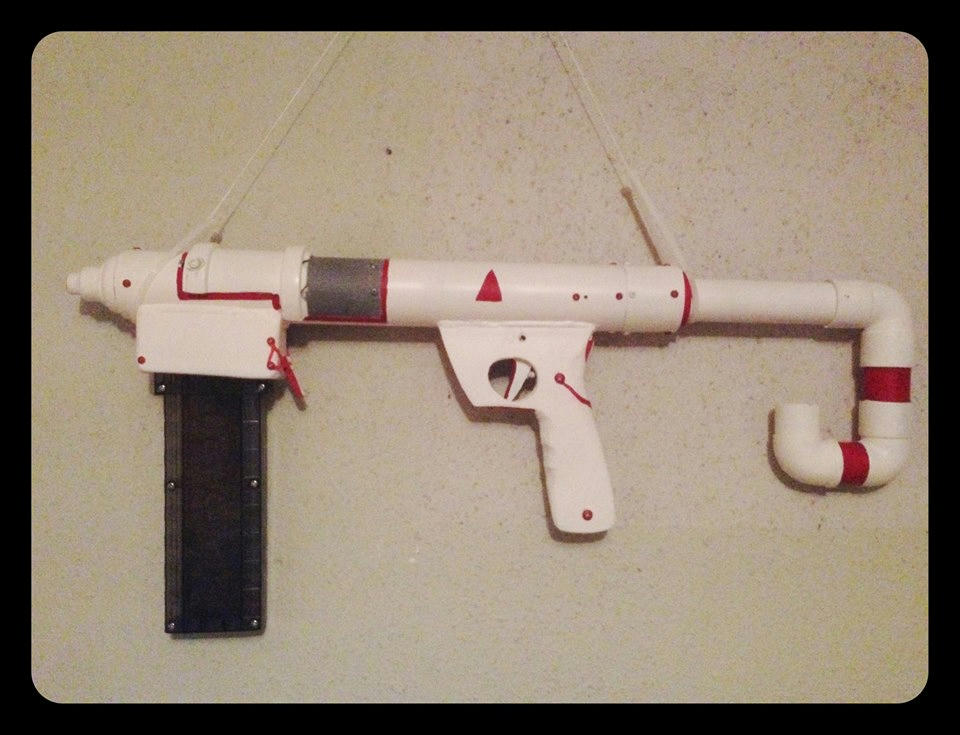 I call it: The Russian Replacer

Internals before paintjob.
(this was without the trippleshot spring) 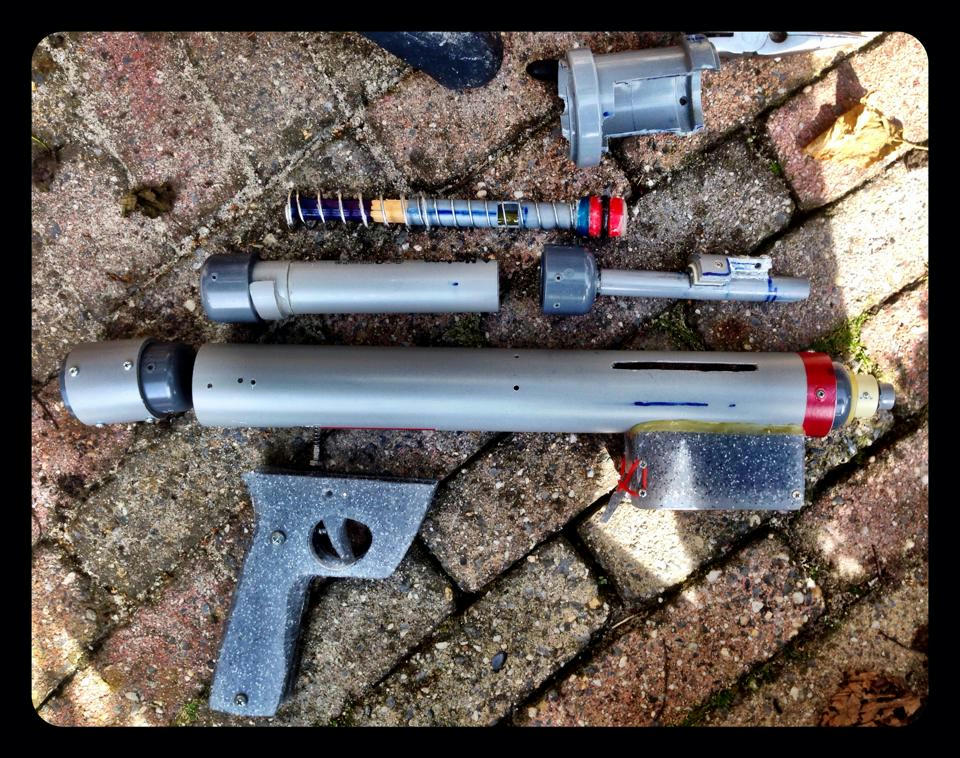 Streamlining the Double Rainbow. I use slightly less draw and slightly more pre-compression. That's with all my blasters, so I'm deviating from Koree's design a bit to increase strength and ease of assembly. Or I could be wrong. That's a possibility. Writeup soon.

With pistol grip and pump. Can be 3d printed or hand-manufactured.

Tornadobow with custom made internals, made by archangel24. Extended draw, reinforcements, and such. Aside from a waffle-box-free pump grip, I want to add a valve system and associated trigger so that I can have 1 input tube rather than 3. Once I do that I can make a video of myself firing this thing until I lose consciousness, which will probably happen before I run out of ammo. Sadly drum mags do not fit in this rig, but the mechanism could be altered to make that happen in the future on similar blasters.

Coming to a war new you. The evolution of the Double rainbow I've been toying with for the last couple weeks. String stop makes this dry fire safe. Precompressed low draw plunger system gives this thing really good ranges, just under a traditional cocentric-force blaster. Barrel-slide lug in the front prevents this blaster from bowing out and splitting apart like I've seen other DRs have a tendency to do. Polycarb sideplates make it pretty strong and allow for an optic attachment if you're really lame like me. Writeup soon. I'm more pleased with this than I expected. Stock to bushing measurement is 18.5 inches.

EDIT: Yes, I've been whoring this thread but I've been on a building spree. There is another one coming soon I'll try to be more concise.

This +blow is only 1/3 as cool as the last one, but much more practical and adaptable:

Expect to see a version of this attached to ESLTs soon, and possibly some other blasters.

edit: I did, and it doesn't really work. I think the breech seal in this version is dramatically worse than the +++blow because the hole was printed in a perpendicular orientation. Next version will at least rely on a separate piece to seal in order to keep that hole in the right orientation.

Update 11/26/2014
Major design update. The main breech seal is printed vertically, and the junction is a CPVC T rather than a printed manifold. The seal is massively improved, and the magazines now fall out when released with gravity alone. The difference in seal is clearly noticeable as a blowgun, and it makes use with springers more practical. I still need to properly adapt this to an ESLT, but I tested the magazine and breech module on an ESLT with promising results. Update 12-22-2014
I've built 3 of them now, and madea post on thingiverse. I gave them to a guy and his kids who sheared rods loose from their set-screwed location on 2 of them, and then fixed them without any help from me. It's pretty clear that using a set screw through a printed plastic piece into a plastic rod doesn't hold well. I wanted it to be easily adjustable but at least the rear piece is going to be changed to a fixed end mounted version.

The Bloodlines have been Xrossed!

Still a WIP. My latest endeavor/prototype. Inspired by the Mountain bike forks above (I mountain bike - Downhill/Enduro). Obviously, much tweaking and testing still needs to be done. Nothing has been 'set' as I'm leaving it with the ability to dismantle it for the eventual write-up.

Drev's Bullpup blaster with some Aeromech flair, currently in the "Trident" configuration, with reverse wye chopper designed to be used specifically with my removable clips. If you've used a chopper before, it works alright, the blaster itself still has some teething to do. Not war ready quite yet.

The "slotless" mechanism. I made a writeup on this like two weeks ago.

This is made of normal blaster parts, but it has been mostly homemade-ified beyonf recognition. It's an expanded hornet tank with a bike pump and pvc/polycarb shell. It shoots very hard. 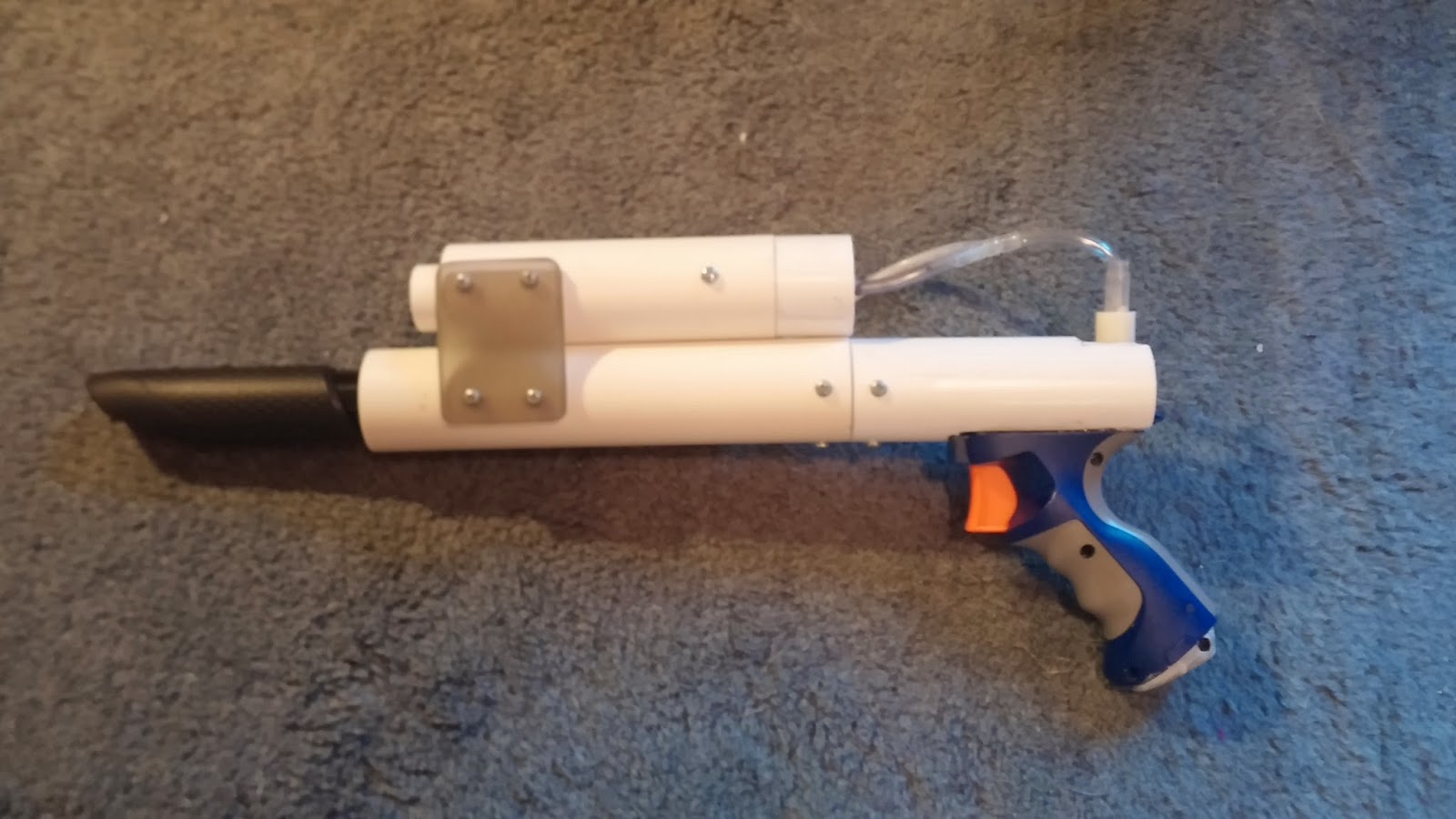 I made yet another version of the BullPAC. The hope was for a smaller, easier to build, and more reliable BullPAC. I think the latter two worked out.


Better plumbing and an o-ring check-valve: Another variation of the Purple-catch handle. The PullSCRTs use something very similar to this. As you can see from the above comparison, it doesn't look like I've revolutionized bow power just yet. I think I can make the bow arms a bit shorter with less forward bias, and hopefully make the bow cross shorter/more compact as well. Currently each bow arm is 24 degrees off perpendicular, I think maybe 15 or 18 would be better. Ideally, I just need to stop using plumbing supplies for my bow arms.

And here's another pic just because: I'm very happy with the consistently good performance this blaster provides. The piston system has very little friction, and seals very well. Range is slightly greater than an ESLT, which is meaningless to most people, but lets just say I've got it shooting as hard as I want it to shoot.

The priming grip kind of sucks, and will be replaced with a 1" wye as was used on earlier, similar BullPACs. I printed that one as a temporary measure. A bunch of boredom on a Sunday with neither football nor Nascar led to this. Stupid simple snap crossbow. I didn't even bother with routing the airflow. It just goes around the bow arms, which are one solid piece all the way through.

Quite possibly the largest caliber homemade blaster the NIC has ever seen: Xeno Cannon!

In space No one can hear you mod.

Takedown bitches! Still needs a trigger because I am missing one 25 cents screw for the trigger rotation bar. Has a 5.75 in draw, a full [k26] Spring, pump action, and can (theoretically) work with a barrel up to 10 or 12 inches. Only uses one eye-bolt to lock the two halves together, so this thing can be assembled without the use of any tools! Designed for close quarters nerfing and easy portability, this blaster weighs only 1 lb 12 oz, or 1.75 lbs, before the barrel and hopper assembly are added. Will be making a pullback version too, I really like this concept

I'll just leave this trash here. Could have studied for midterms, but nah, got too much uncut PVC.
It is just a trashy pump snap variant with a rotating speedloader attached at the front. I also made this Aabow. I kinda like using this thing. Feels great to fire with a hopper. Also my "model" didn't want his stupid face shown. ESLTs now in stock. 5 available colors to choose from.

Check out our sales thread.

PullSCRTs will be available by early next week.

Check out our Featured Sales Thread.

The rest of you guys suck! Triple post up in this bitch

Super rocket attachment. Loosely based off of Sorrow's turrets he used to sell.

Another refinement of the bullpup series. Not satisfied with the stock size. I've been trying out various designs and widths before applying foam padding. The blaster is 23" long with the added 2" of stock. It could be 20" long and entirely functional but I prefer a bit more handle to shoulder length, as well as a 3.75" priming grip.
It still has slamfire and all previous features.

The bullpup is still shorter than my plusbow even after I shortened the plusbow by a couple inches to increase stability and accommodate for 12" sideplates.

Coop made a video on this blaster: https://www.youtube.com/watch?v=6SeaULOyy-0

The bullpup in his video uses a 3" PVC priming grip that was heated and shaped around the plunger tube. I've been doing some experiments with heating PVC to create more ergonomic priming grips.

It is just over 24" without a barrel. The design was inspired by Dan Beaver's Don Quixote and snakerbot's shortend pump snap. It also has an anti face diddle sheath.