This was my first Nerf blaster, and it's a piece of shit. It gets ranges from 15-25 feet, which is not acceptable. This thing is a big, bulky, uncomfortable, waste of space. I hated this blaster, and even with only eight blasters (two 8 shooters, six Reflex IX-1's) at one time, it was still not chosen for battle. Now, I have 44 Nerf blasters, and this blaster still remains at the bottom. Let's have a look at this thing. 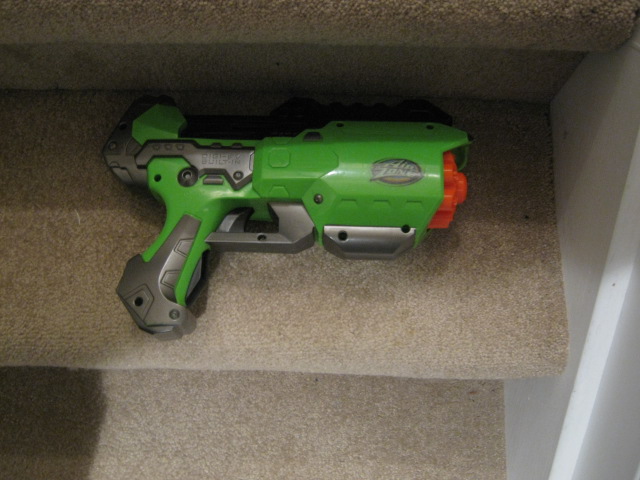 This was initially released by Banzai, and branded as an Air Zone product, like the Quickload Power Blaster. I like the colour scheme, but that black bulge on the handle hurts my hand. I also can't stand cocking this thing either. This has got to be one of the most uncomfortable blasters I've owned. There's also this weird inscription on the side of the blaster which reads "Digi-FV Built In". My ass, what the hell is Digi-FV anyways? 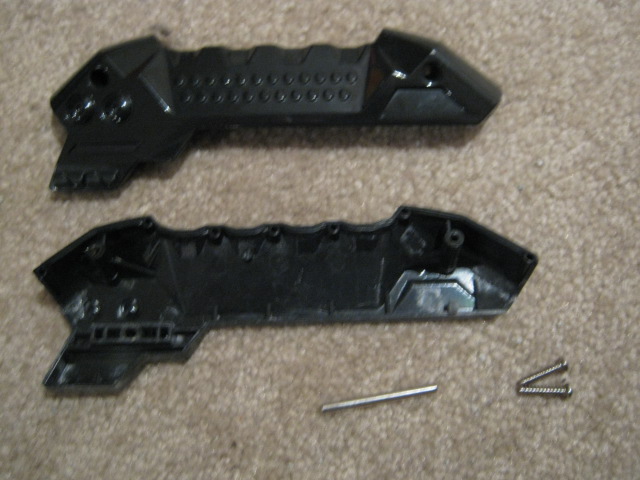 First take off the cocking handle, and if you're smart, throw it in the parts bin. With a replacement cocking mechanism, this would be a much easier blaster. The cocking handle is stiff and uncomfortable, so I was glad to get rid of it. Unfortunately while unscrewing the green blaster's cocking handle, I discovered that the screws on it were the easiest screws in the world to strip. So, I had to try again on the yellow blaster. That's the blaster I will be using for the rest of the write-up. 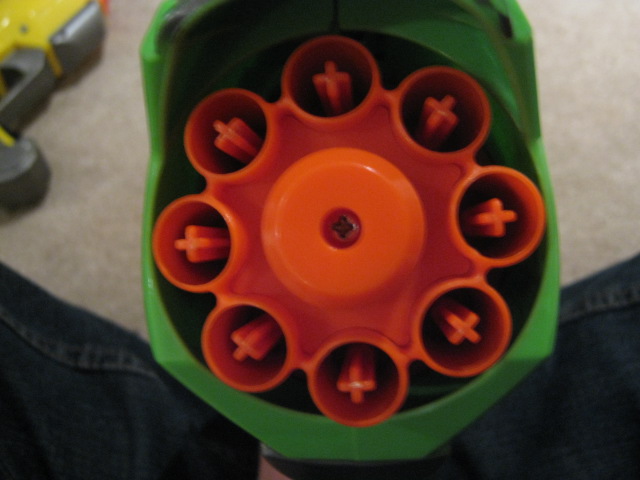 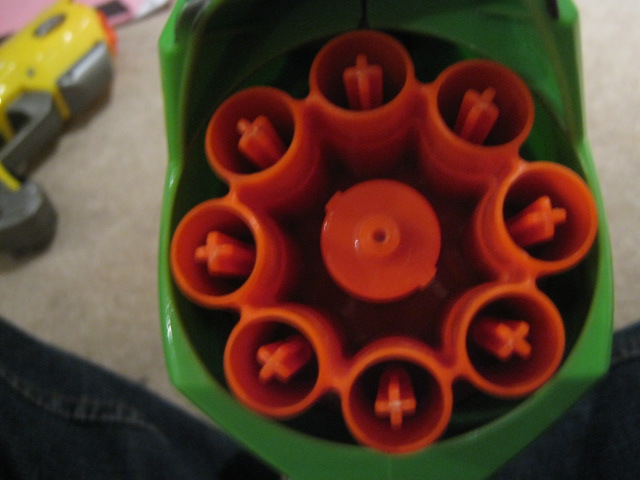 Unscrew it and remove it. This will make a great barrel spacer in the future. Hold onto it for now, when you're done you can re-attach it. 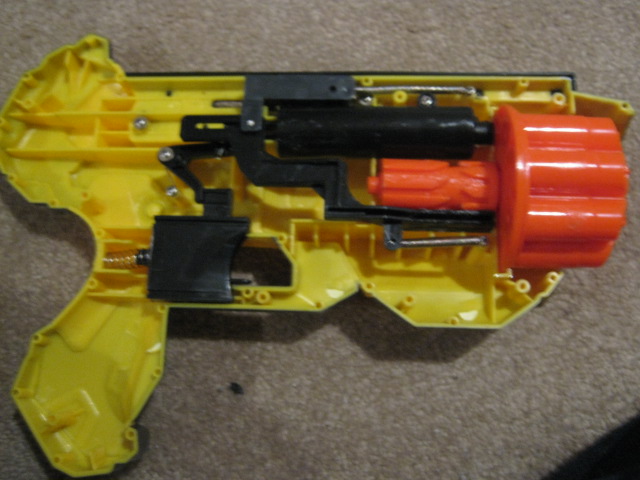 Once you've unscrewed everything, welcome to hell. These internals are greasier than anything that comes out of McDonalds. It's COATED with grease, so wipe some of that shit off. 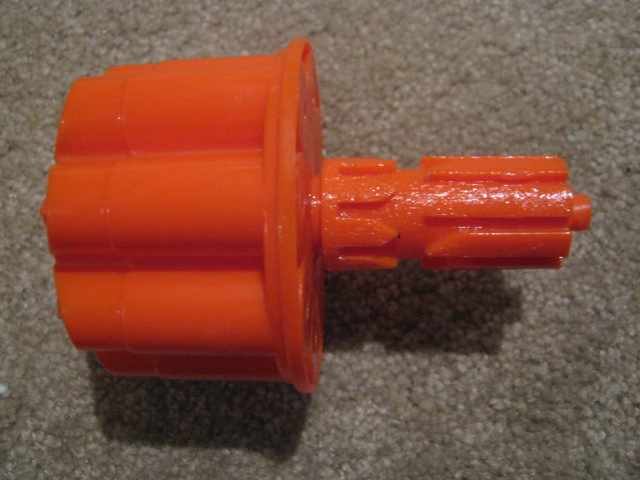 Focus on this. This is the cause of all of the problems, and I can't wait to tear this apart and re-do the barrels. 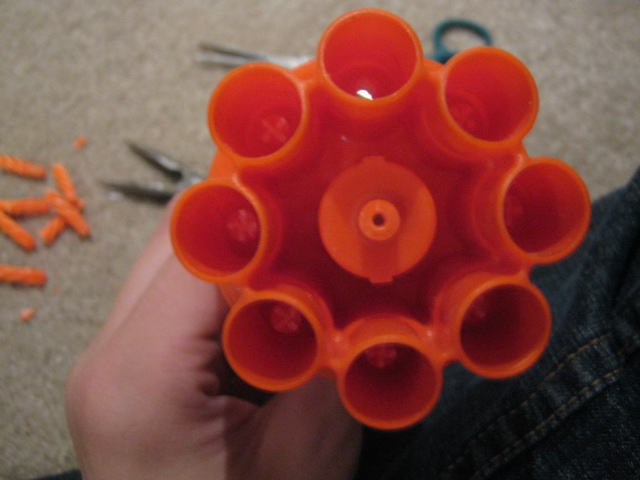 Rip out the air restrictor pegs, however when I ripped out all 7 of them (the 8th had been previously accidentally removed), none of them gave the desired outcome. 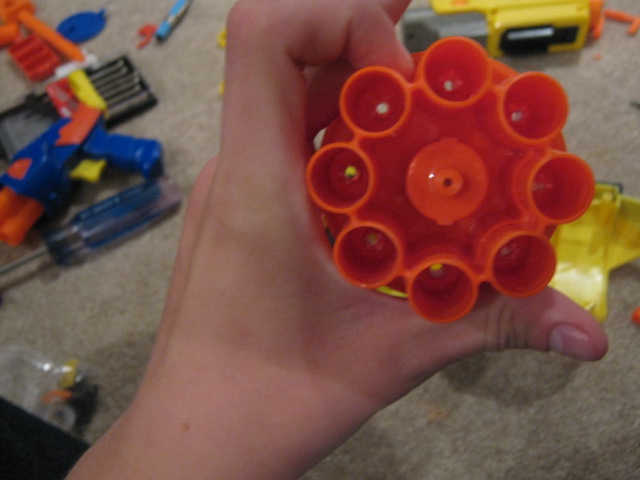 Grab your drill and drill out the rest of the pegs properly. Once you see straight through them, you've done it correctly. 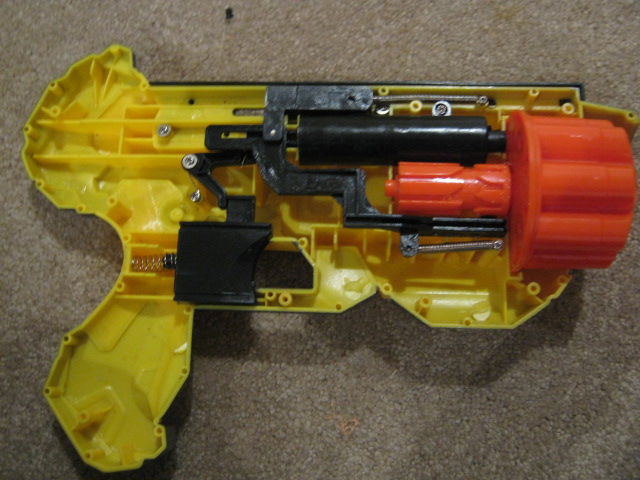 Put the barrel back in the blaster. The rest of the internals aren't worth bothering, I haven't been able to get the spring out yet so there's not point in trying. 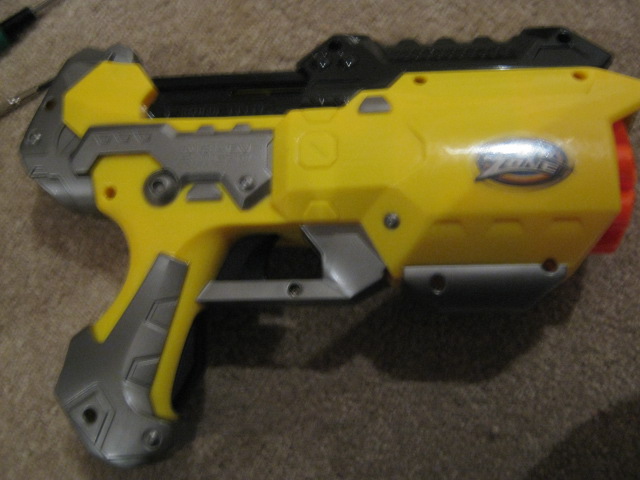 Screw everything back together, and load the cocking handle back on if you dare. It would be best to replace it. 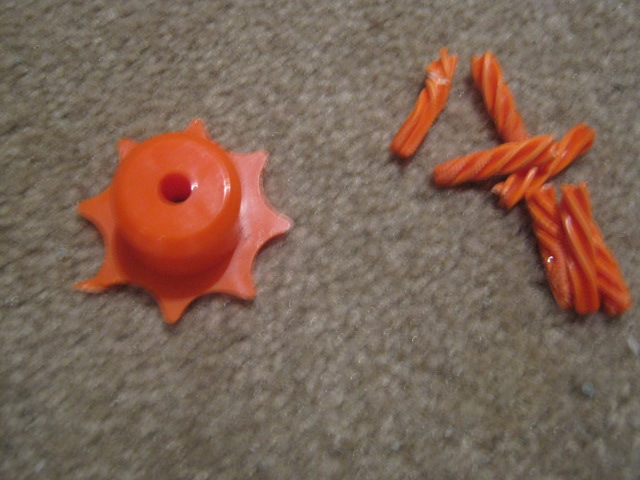 Throw out the pegs and keep the barrel spacer for later mods, or just put it back into the blaster. Without the pegs, I can now hit the end of the wall in my house, so it's a bit of an improvement. But, still, this blaster sucks. Don't buy it. Thanks for reading.

The shell is horribly uncomfortable. The only thing that's really worth doing to the turret is putting it in a quadshot.

The shell is horribly uncomfortable. The only thing that's really worth doing to the turret is putting it in a quadshot.

That of course, but after that you have this shell with nothing to do with. Buffdaddy fixed that problem here.

Thanks! Hearing comments like these make me feel encouraged to do more mods, so thanks a ton!