I was really looking forwards to this shindig; I've been sick and had to attend a funeral too much lately for my work to allow me to get the day of the war off.

Are you packed? Do you know exactly everything you are going to bring? PACK!

Diz-am if that ain't over a thousand darts.

Yeeahh I haven't made any new darts yet...

Are you packed? Do you know exactly everything you are going to bring? PACK!

Diz-am if that ain't over a thousand darts.

Do those fit petg or cpvc better? I just want to know what kind of barrels to bring.

Do those fit petg or cpvc better? I just want to know what kind of barrels to bring.

The glory of pink foam is that they fit everything. I use CPVC in springers and air blasters alike with success.

The glory of pink foam is that they fit everything. I use CPVC in springers and air blasters alike with success.

All glory to CPVC - the best barrel material.

I'm so ready for this!

Running a little late as usual, but I'm on my way!

That was some Effeminate sub-optimal shit!

This was a top-shelf pour of oak-aged kickass. This war was like finding a five dollar bill and finding a twenty wrapped up in it.

PROS:
+We had MN, IL, and IA reppin STRONG today!
+Stark, Kane, McNumnums: you where my Christmas, and I came early.
+Warmods, Jamie, Janik, Gabe, Iowa kid AND dad: solid first war performance.
+People brought friends! JudeWolf: Gabe was cool. Eik: your pals were great. Tim: as always sweet peeps.
+Holy balls we had a lot of mobsticals. We had a metric butt-ton of mobsticals.
+Great participation: I can say for a stone cold fact that EVERYONE made a difference and enhanced gameplay.
+For a personal win the shield I made worked like a damn charm.
+Got started on my farmers tan early this year!
+burned hella calories tearing ass all over the field. 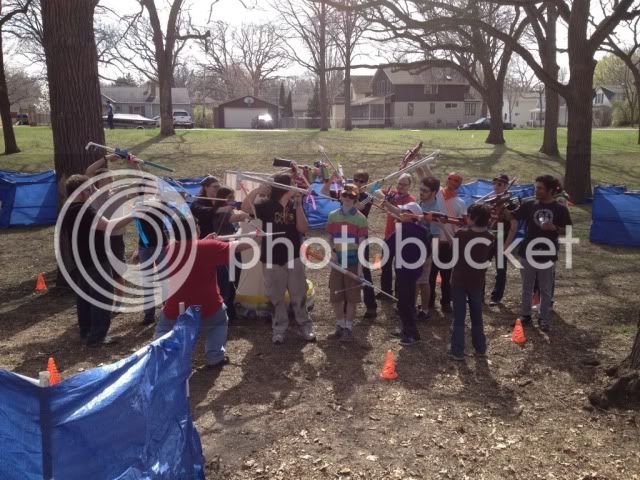 I am bummed I missed out.

On the plus side, the boss who promised the day off and didn't give it? She's being transferred on Monday. Sweet justice!

What an effeminate day. Exceeded expectations. A+++. Would Nerf again.

Cons:
-JSPB broke in my duffel before arrival
-Ripped the Jolt out of my Nerfalodeon Nitefinder
-Supa out of shape
-OMW Raider kit was finicky Pros
+Unexpectantly good turnout
+The crap ton of mobstacles, some of which were converted into giant walls
+The new 360° core
+Bringing another new person to a war
+No issues with slugs whatsoever

That war was a great start to the 2012 MN nerf season!

Pros:
+The weather was great
+20 people showed up
+My pumpsnap preformed very well
+I managed to hit Dirty Dan a few times, which is a feat for me
+I captured the princess a few times in Mosh Pit
+My pants got very dirty from all of the baseball slides and rolls I did
+I got to meet some new people form Chicago
+Lots and lots of mobsticals

Cons:
-I swear my hopper has a black hole at the bottom - I spent a lot of time reloading.
-We took a REALLY long lunch break

+Starting off the 2012 Season with a bang!
+Ryan, Kane, and Stark showing up unannounced.
-Coming over an hour after the action started. Lesson learned.
+Driving Erik, Derek, and Stark to Taco Bell while blasting NWA.
+Erik playing his homemade Rap music for us.
+Superb service at Taco Bell. We took like 5 minutes to order and spent like $36. Not only did they not forget about anything (that I noticed), they had it ready incredibly fast too!
+Coming back with way less stuff than I left with!
+Noah's eyes lighting up when I gave him a bunch of janky stuff for really cheap.
+Much better turnout than I expected, more than double my expectations in terms of attendees.
-Paul, Finky, and others weren't there.
+Talking to Ryan about how people think he's dead.
+Throughout the day, seeing people flock around our arena just to watch us.
+Playing all the games in the same area. It made everything so much easier.
+Not getting kicked out of the park or interfered with by pedestrians too much.
+I don't think we had ever had a war with the weather that nice at Newell for fear of being kicked out or not having a playing area, so that was a first.
-Both of my Plusbows showing clear signs of needed maintenance.
+Even in this age of hoppers and pump action homemades, I still love to use my trusty old PistolSplat.
+Trolling Erik constantly.
+Calling Julian to see if he happened to be home only to have a really awkward and hilarious conversation with him.
+Dirty Dan wearing his colorful shirt and raping face as usual.
+Seeing Noah's awesome pipe reamer. I promptly ordered one for myself after the war.

This is some of what was discovered at our staging area. Let that be a lesson: Nerf > Alcohol and Sex!

Very excited for the next war. This war is an indication of a good season to come!

Great start to the season.
so. much. fun.

well, actually...
+Kane, Ryan and Stark made a great day greater. bonus points for making it a surprise!
+Rainbow performed flawlessly, I was happy to see how fucking far it shot. I had fun dicking around with a speedloader instead of a hopper for a couple rounds, hadn't done that before.
+getting another Xploderz pistol to re-shell said rainbow- the current xploderz shell is shit.
+sn1ping with the rainbow.
+My eyes lighting up when Zach gave me a bunch of janky shit supa cheap. (a Zero valve? da fuck?)
-Not having enough darts
-Not bringing my shotgun hamp because i didn't have enough darts
-Not bringing several just-for-fun blasters (reverse plungers woot)
+++++++Finishing an AABow the night before (my friend kathleen did most of the work earlier). that shit is so fun.
+Talking to Kane about AABows and Tagger Hoppers. Cool stuff. When combined, shit gets real.
+Getting a ton of stuff. Including a salvo, tetra strike, and more. Special thanks to my bros EiK Velveeta and Venom.
+-Barely being able to carry everything.
---No pistol rounds. They're my favorite.
+being on time to a war for the first time! Beat my old record by 2 hours.
+Just such a god damned chill day.
+Kinda not actually caring about winning rounds. Spent a lot of time taking pot shots for fun.
+looking at all of EiK's stuff. Definitely my future go-to for painting.
+SEEIN ALL YO BYOOTIFUL FACES AGAIN
-It's been a long winter.

Why does no one else have a reamer? They're easily my most used and favorite tool.

+++Forgot, seeing Stark's sweet WIP. I don't know if he's keeping it secret, so I won't say what it was, but it might be the coolest thing I've ever seen.

I motion that the tagline for the next war be "Where are the pipe reamers at?"


"I never saw Beastmaster, I just wanted to be cool..."
Back to Nerf Wars