Okay guys, this isn't going to be as detailed as my other write-ups because I lost all of my progress photos. I lost them during the transfer. I'll have to try and explain what I did with only the final product.

The motivation for this mod came from pSyk and his 8x Jialat Jialat (FireFly turreted Lego Harpoon Blaster).

In his write up and video, he explains the meaning of 8x Jialat Jialat. It's actually supposed to be 10x Jialat Jialat but because he used a Fire Fly Turret, he gave it the name 8x.

Well... then of course I had to create the 'proper' Jialat Jialat, 10x!

This is how it started. 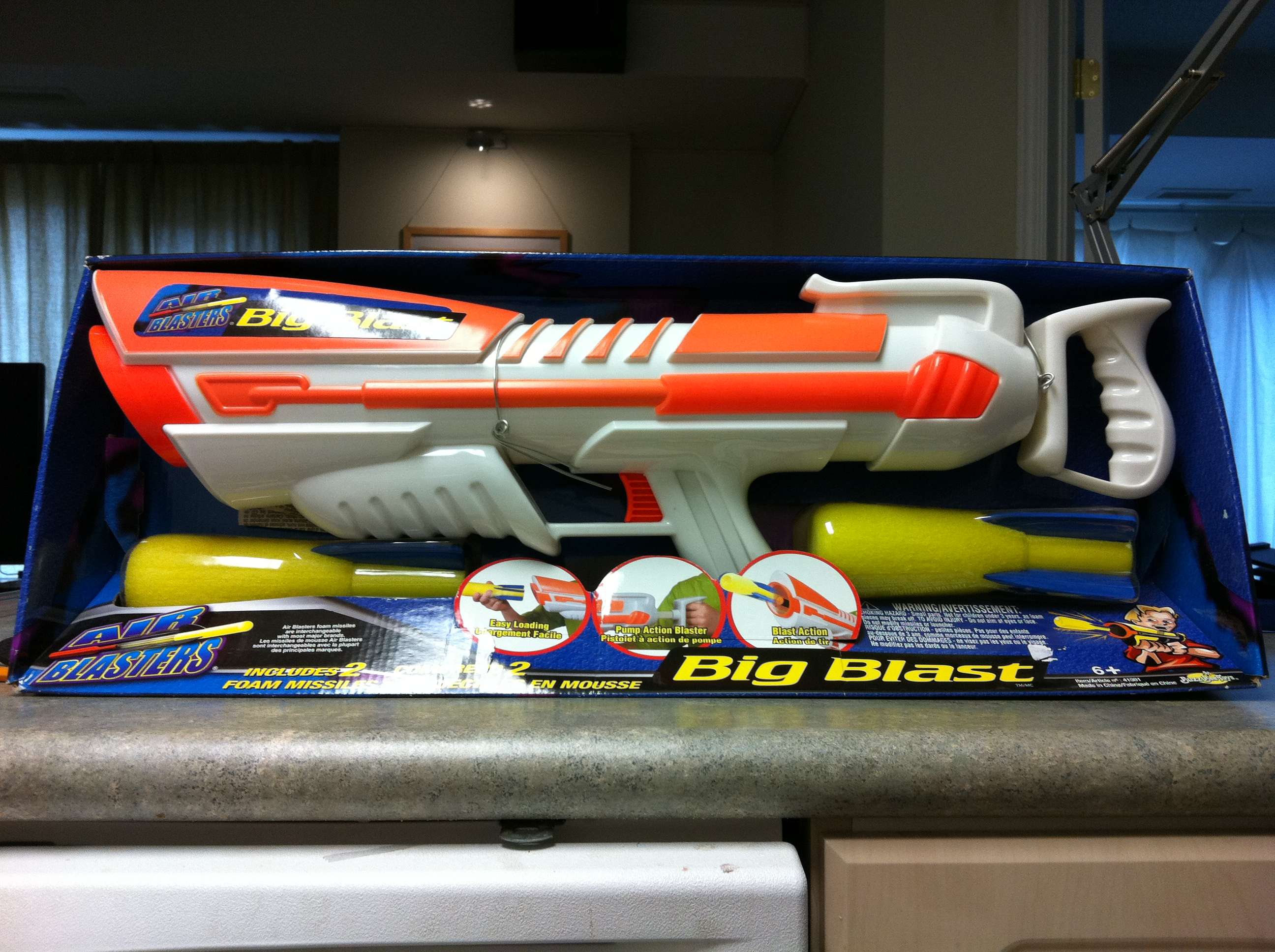 I was having trouble trying to make the turret fit properly when it occured to me, it would be easier to move the air tank instead.

While I was taking the tank out, I then thought, how can I one up pSyk even more. I know it has 2 more barrels but what else. After watching the video again, I realized that he was manually advancing the turret.

That was It!!! Make the turret auto advance.

At first I thought I could just use the Tek 10 priming mech but then I realized there was still that one extra step: Pump, 'prime' and then fire. I wanted to get rid of that one extra step. There was only one blaster I knew of that auto advanced and had a 10 barrel turret, the Hyperfire DTB!

I know. It's not the greatest blaster and it usually gets relegated to being under-slung to a Long Shot. I felt bad for it. It seemed so sad. Always the side kick and never the hero.

Luckily, I had one of those. Initially, way back in the way back, I had modded this thing like every one else mods it. AR removal... blah, blah, blah. But I decided to revisit this neglected little blaster.

I present to you, no longer the side kick, The 'Hero' HyperFire. 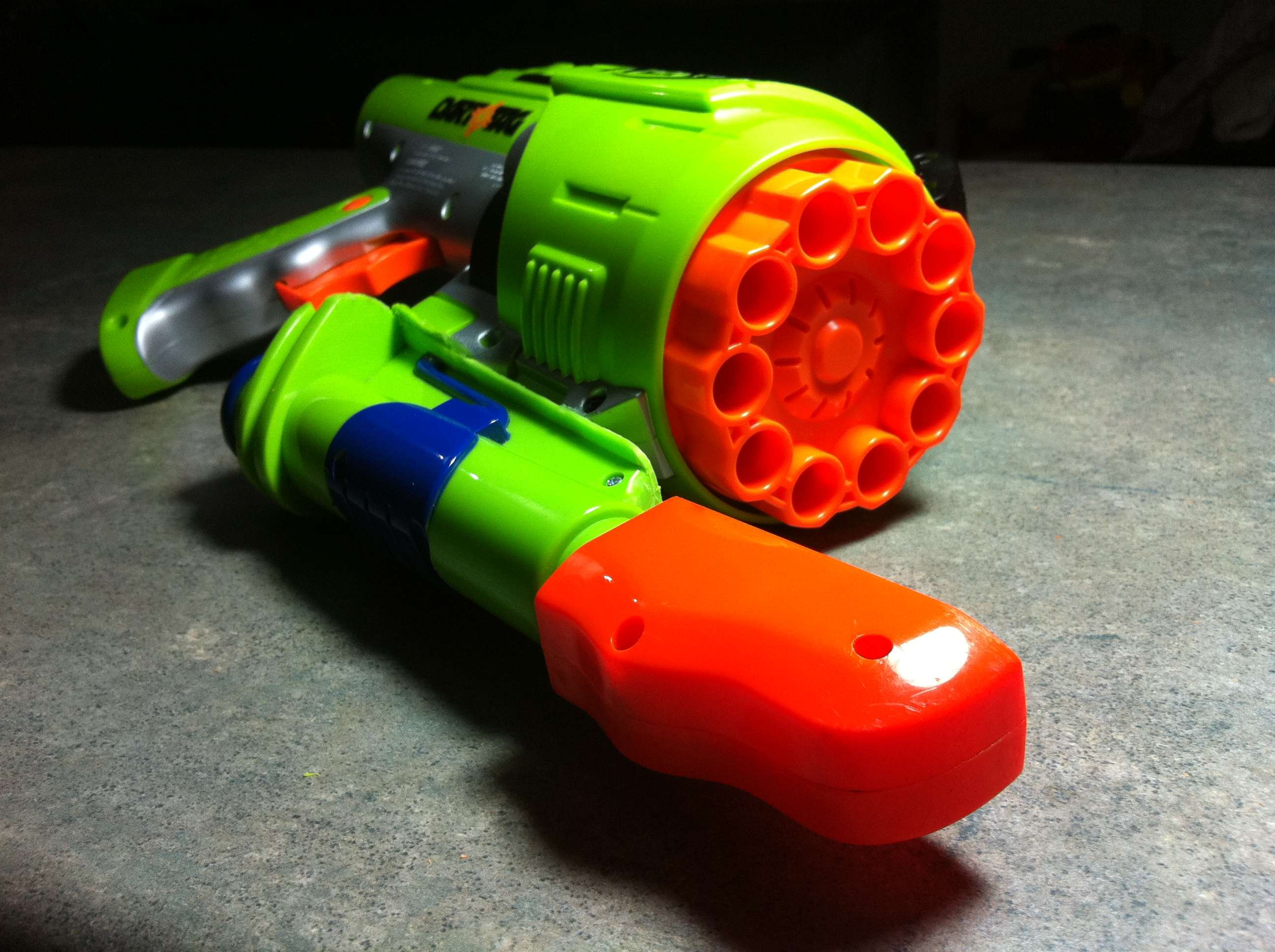 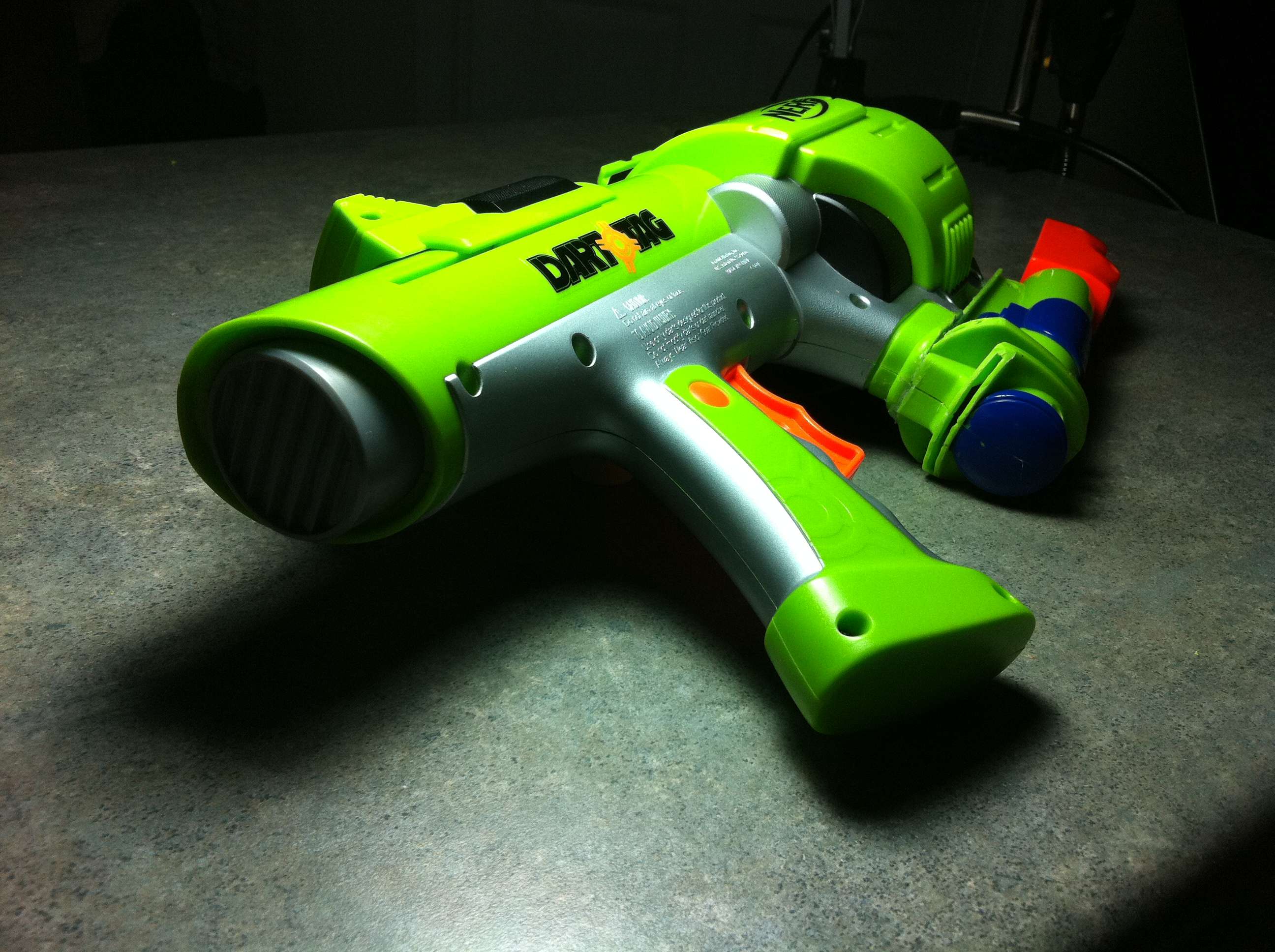 Okay, let's tone it down a bit. Tada! Alright, a little explanation is in order. I didn't use the 4B because this was still an experiment and I didn't want to destroy a perfectly good 4B just in case this failed. This is still sort of a work in progress.

I used one of these. A Water Warriors Baracuda. When I saw the shell, I was like, that will fit perfectly! 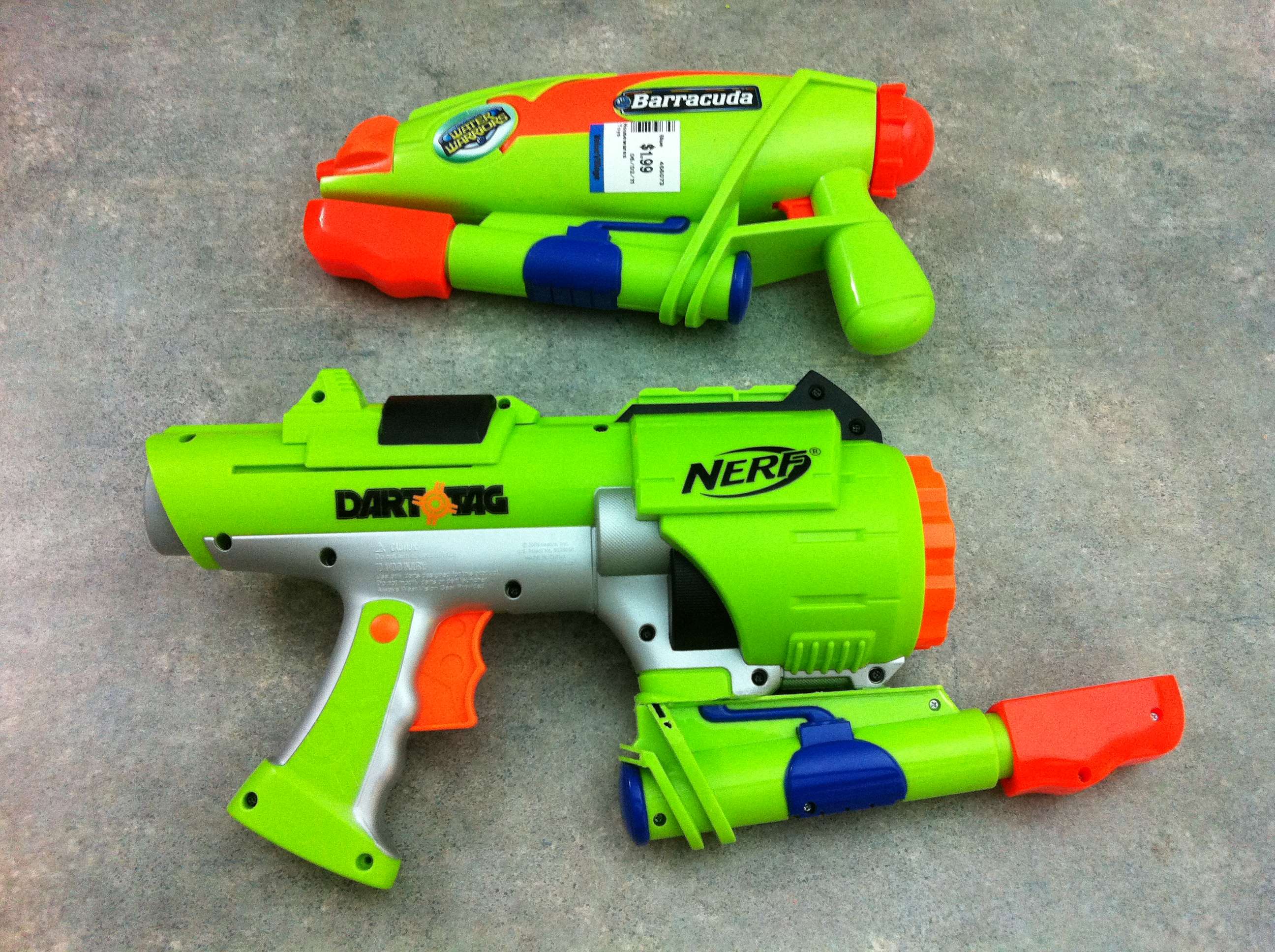 First, I got rid of all the useless bits from the Barracuda. 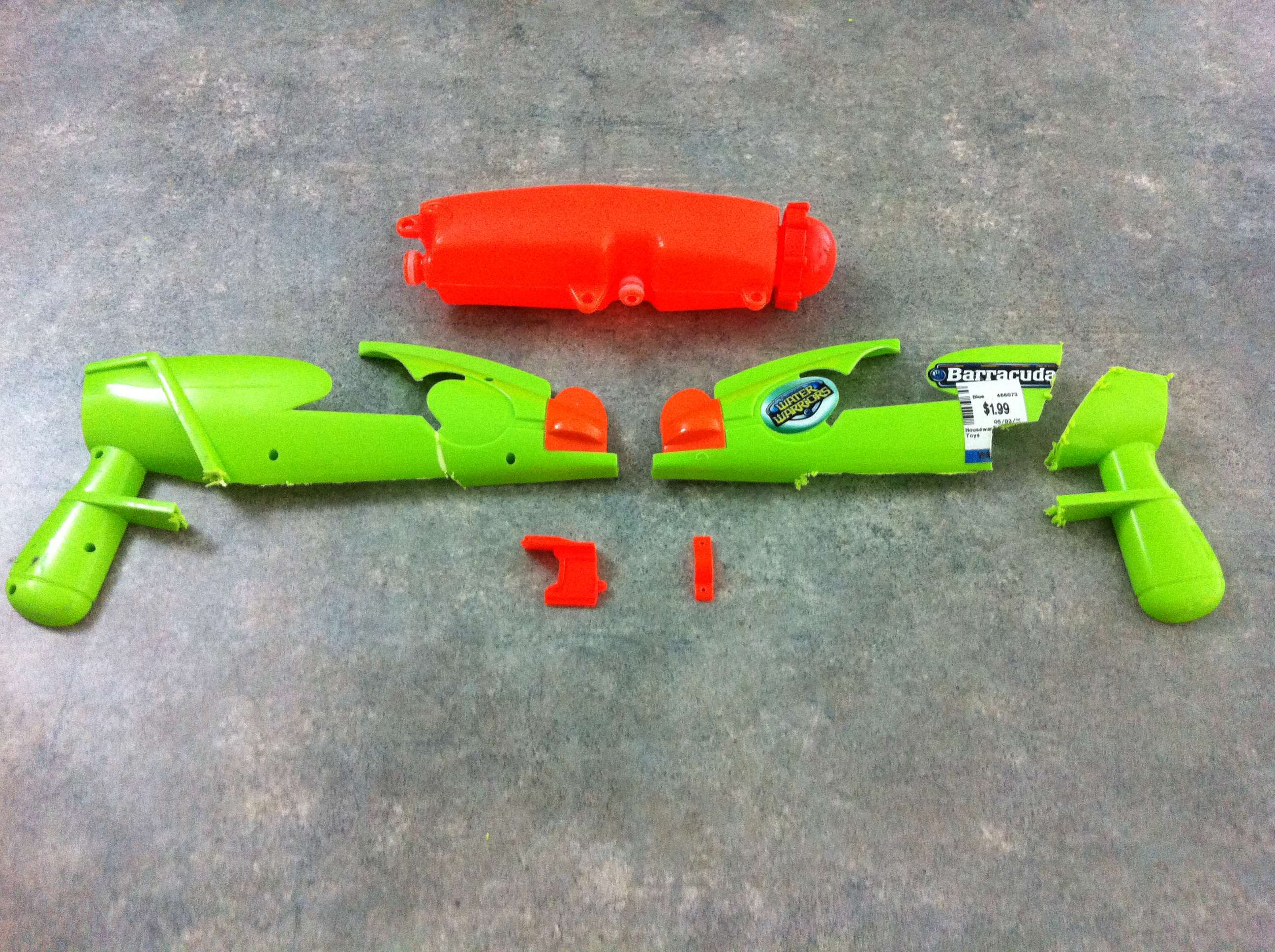 Here's an over view of the almost completed internals. 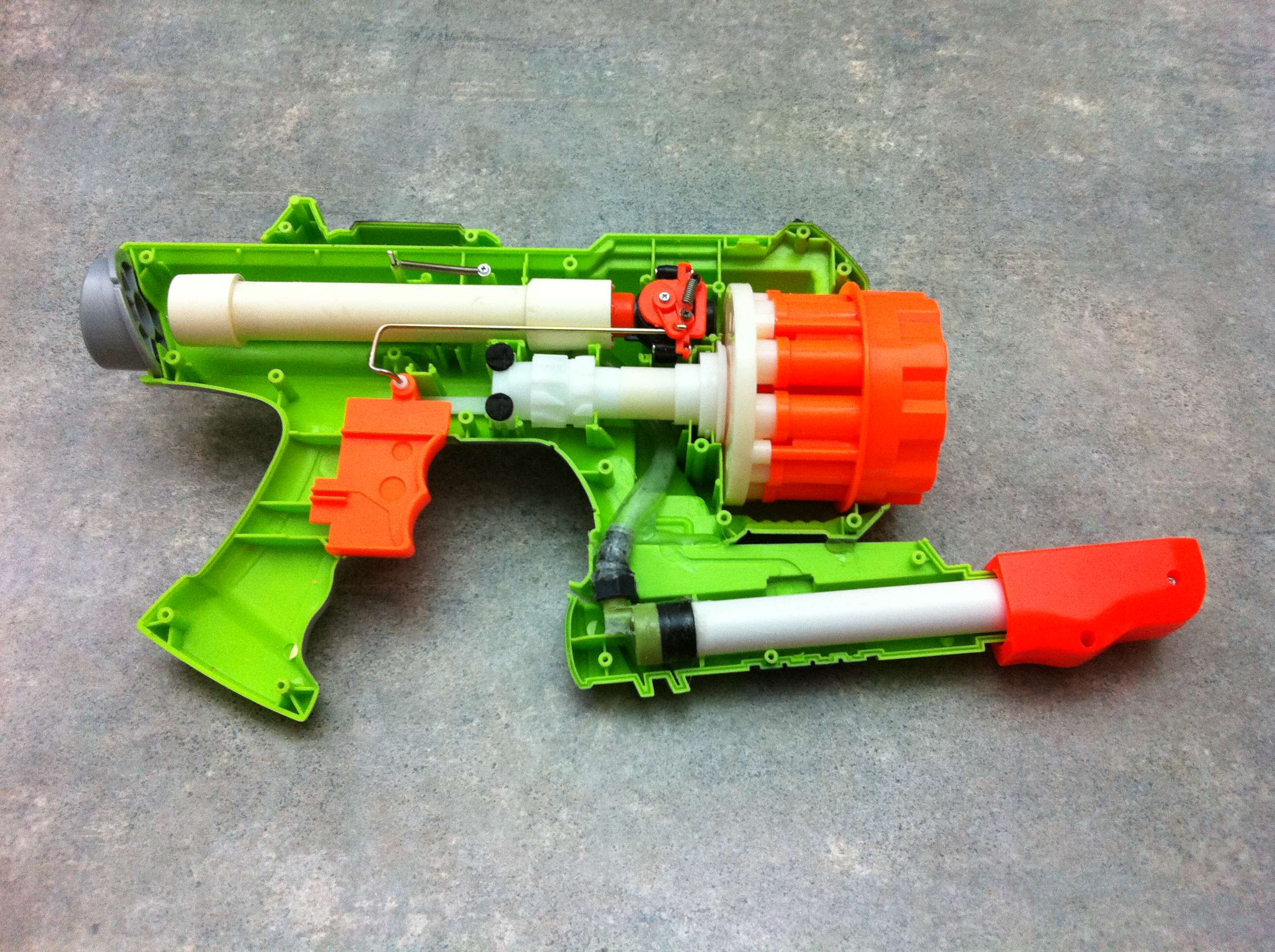 I simply just hot glued the two halves of the shells together. I know someone is going to blurb out, "You should use epoxy putty! (nasally geeky voice *sniffle - pushes up glasses, pulls up trousers)" But the hot glue is holding up just fine. I was going to use e-putty but after having a hell of a time trying to remove the hot glue, I just left it and added a little more. Trust me. It's not going to just fall off. 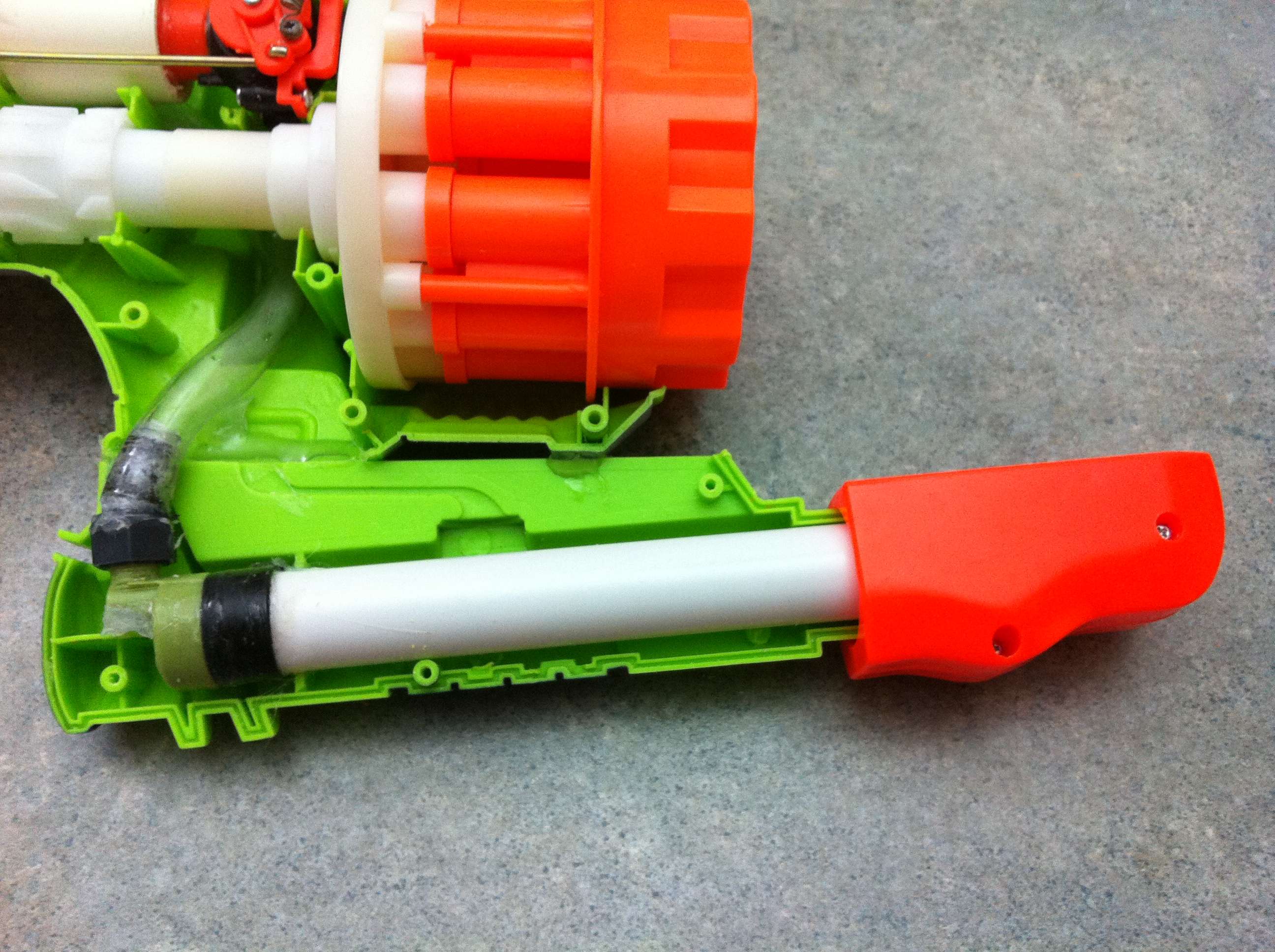 The pump is plugged and the turret has the normal hum drum AR Removal. I do plan on replacing the barrels in the future but for now, this will do fine.

Next, I replaced the water reservoir with a 5.5" length of 3/4" CPVC. I fit perfectly into the HF grooves with some minor Dremelling. I used a length of vinyl tubing to connect the tank to the pump. 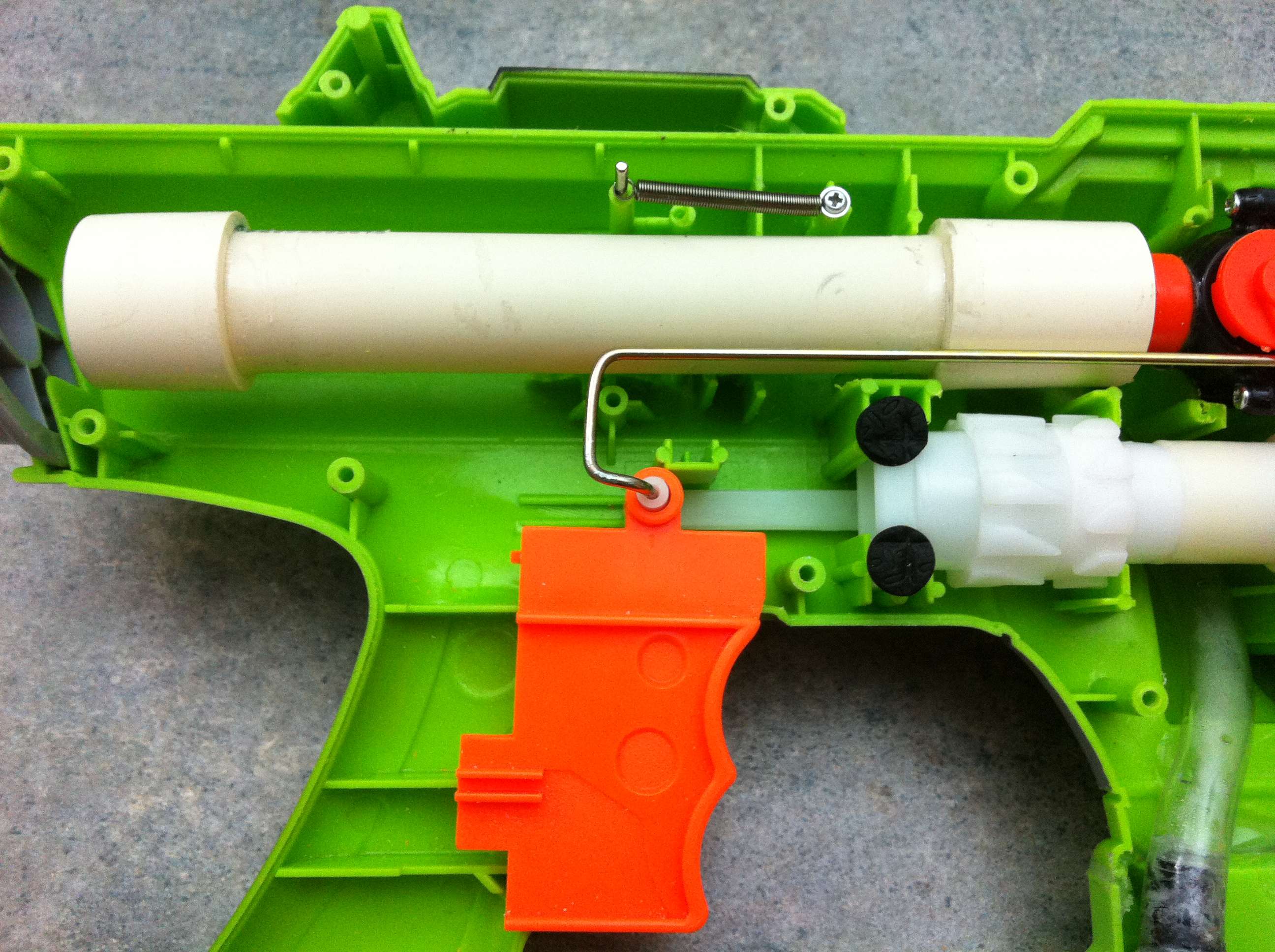 You can see that I've also attached the 2 trigger systems. It was like they were made to fit together.

This the part which is still a WIP. I wasn't happy with the valve to turret seal so I ripped it out for this pic. I had done my suction cup seal but kind of screwed it up. I'll have to get another suction cup in the near future. The release valve is a ball valve system. All I really did was cut off the orange nozzle tip. So the openning would be wider. 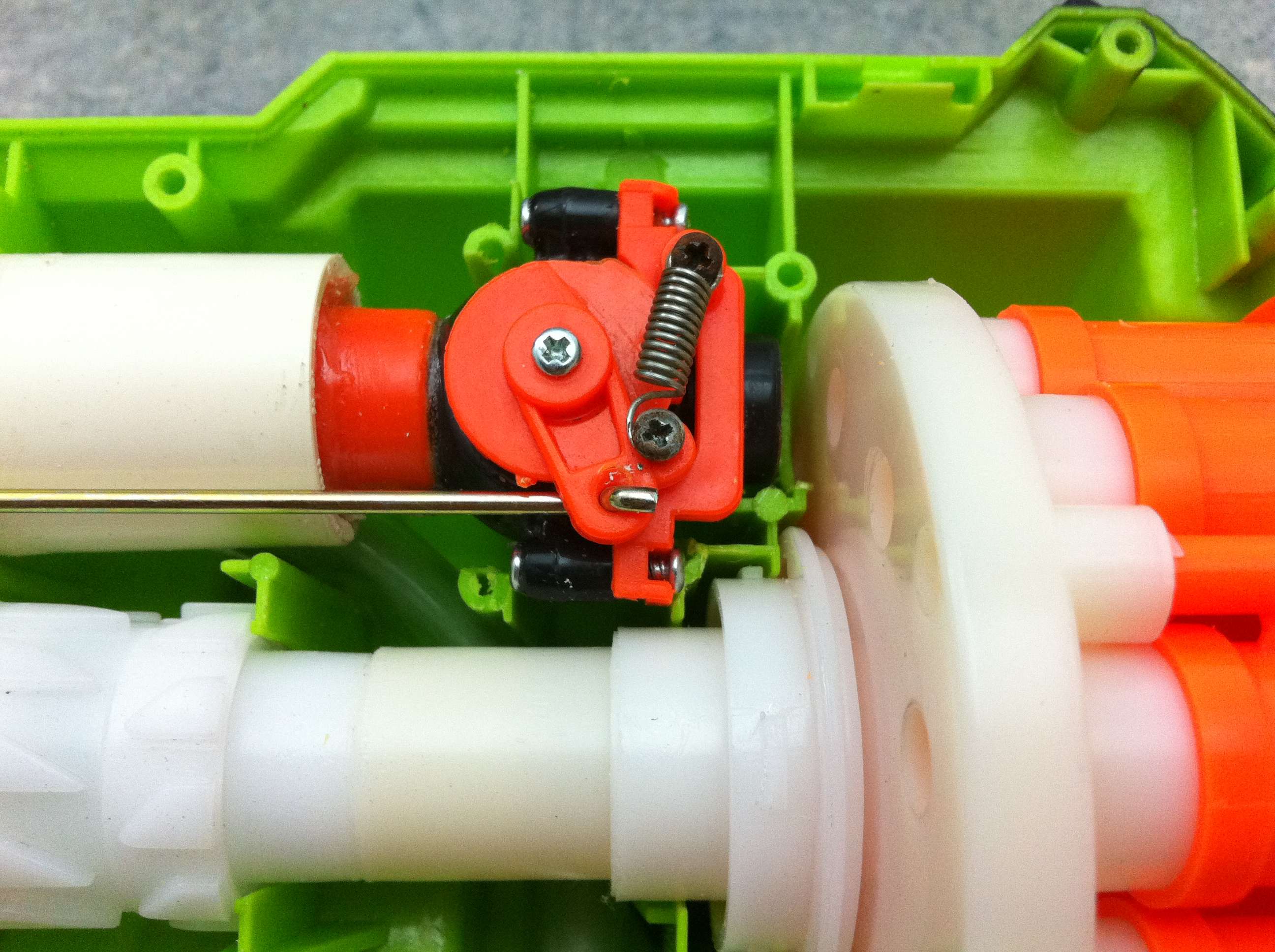 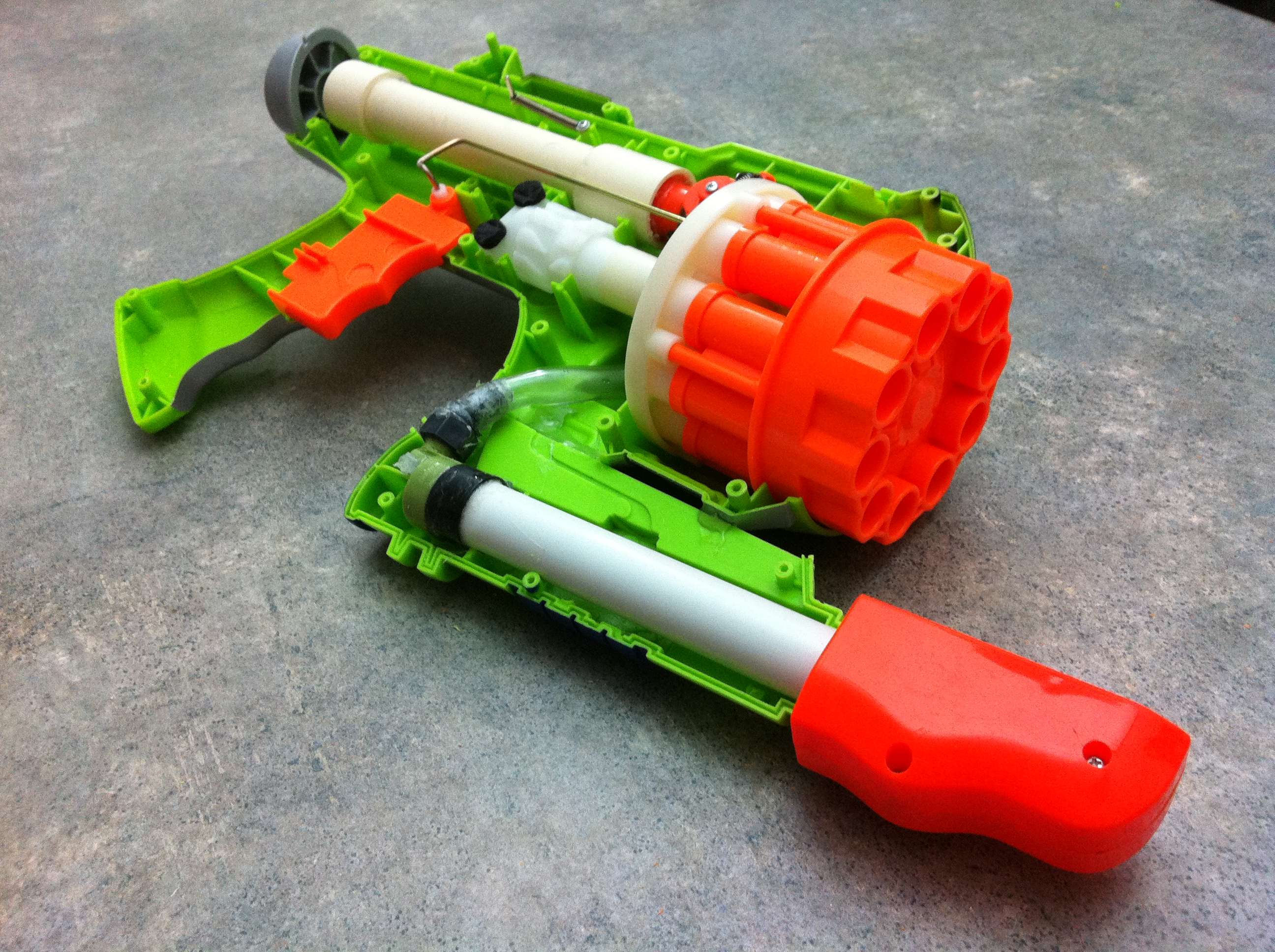 I know it's not as visually impressive as pSyk's 8X Jialat Jialat but I'm not quite done yet.

With 6 to 7 pumps I was getting decent pressure but it felt like it was only getting 50 feet, judging by the speed it hit my curtain, 25 feet away. So, I pumped it up 10 times. Then suddenly heard, "PsssttPssssssshhhhh......" Damn!

I have to put this aside for now but I'll get back to it and probably put the 4B tank into it. I do plan on adding a rear loading hole and PETG barrels but for now, here's my Hero HyperFire.

Pretty cool. I have 5+ hyperfires just sitting around. I actually put a magstrike bladder in one in the past and it was hilarious to be able to get off semi-auto shots using the magstrike valve system. Good job and anxious to see more stuff from you MIG!

I really like all your work man, great pictures, explanations, and mods all around.

One thing I noticed with this one is that the pump looks like it's angled upward slightly. It might cause some interference with longer barrels, which you said you plan on doing. I'd recommend cutting the shell of the water gun at a slightly different angle then reattaching it to the DTB, or getting a different pump.

You'll do a lot better if you spread the lips with the front. Trying to wriggle the back in there first seems a bit counterintuitive.
RSCBow

I really like all your work man, great pictures, explanations, and mods all around.

One thing I noticed with this one is that the pump looks like it's angled upward slightly. It might cause some interference with longer barrels, which you said you plan on doing. I'd recommend cutting the shell of the water gun at a slightly different angle then reattaching it to the DTB, or getting a different pump.

I thought of that before hand. To angle or not to angle? I chose to leave it angled and only add 6 or 7 inch barrels. Which come to right about where the pump handle is when it's fully extended. I kind of like it's compactness. Ideal for rushing and turning tight corners. Plus I could run full tilt holding it in one hand and not worry about scraping the barrels along the ground. ...I'm not very tall.

I found a Super Soaker XP270 today. I'm going to try to swap out the tanks. More power. I know most SS's are band in wars but I'd argue for a test at least. I'm going to have to set the tank further back creating a lot of dead space. I don't see it hitting any further than 100' to 110' flat.

More power. I know most SS's are band in wars but I'd argue for a test at least. I'm going to have to set the tank further back creating a lot of dead space. I don't see it hitting any further than 100' to 110' flat.

Dude... you're in Canada. If it isn't lethal, its probably allowed.

Most wars I know of allow blasters with ranges in the 140s-150s. You'll probably be okay.

If you wish to post anything HvZ related, here ya go.

"...if you've ever suffered the effects of a fucking faggot retard overpopulation, you'll understand what devistaiting effects it can have on one's psyche." - Talio

Well as long as people trynot to catch darts with their eyes, most blasters are safe.

Because calling a nerfer a nerd is like calling water wet.