To my knowledge this variety of breech is unique. It's designed with pressure tanks of large volume and reasonably high pressure in mind, since the design has a decent amount of deadspace and if made sloppily can also develop leaks. I made it with the pulse strike tank in mind, since when singled it's almost too powerful for anything useful besides punching darts through diverse objects like cardboard, wall board, and lunch trays. (Ask Taerkitty about the lunch tray.) 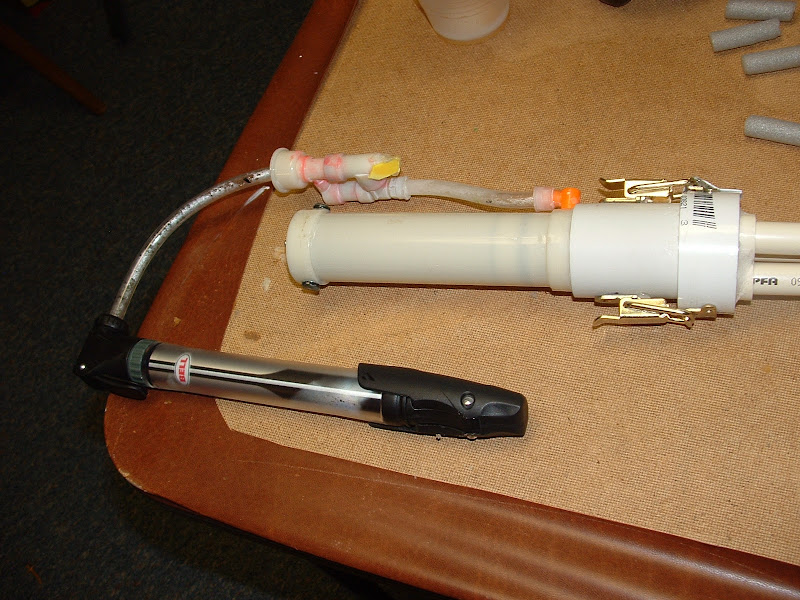 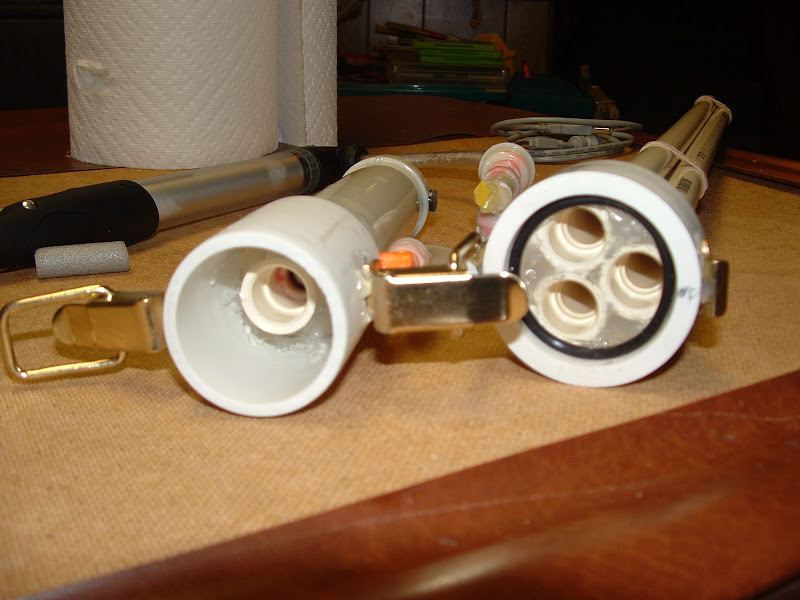 To begin with, this breech size is made with 1/2 CPVC barrels and couplers in mind. A 1.5" PVC bushing with the hexagonal portion cut off is an ideal size for squeezing 3 CPVC couplers into the end. I filled up the gaps with liberal amounts of e-putty/goop/hot glue.

This then mates with a piece of 1.5" PVC pipe. I liberally sanded both the insides of the bushing and the outside edge of the PCV pipe. The mating depth is very shallow so that the breech can hinge. An appropriately sized o-ring goes in the breech to help provide seal.

The whole assembly is held shut tightly with these clasps. Cheap and available at any hardware store. I held them on with e-putty. Unfortunately, due to not measuring very carefully on my prototype, as you see in the pictures, I have to hold the clips down harder with a rubber band. Otherwise they can spring loose if you hit the gun on something. I find that the rubber band placement is also helpful when closing the breech back up, since it reduces the amount of hand motion required to operate the clasp. 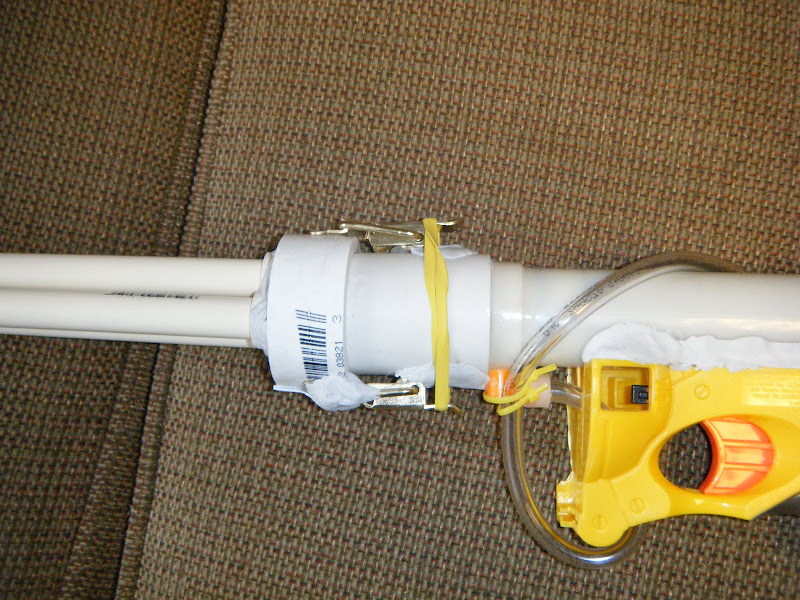 For the final assembly of the gun I also opted to "fix" the lower clasp. At first I tried some less effective methods of more or less immobilizing portions of the clasp. I settled on e-putty in one place- the part where the latch of the clasp contacts the catch on the front of the breech. It will still break open as desired, but has less "floppyness" than with an un-fixed clasp.

Here are some pictures of the WIP gun the breech is currently attached to: 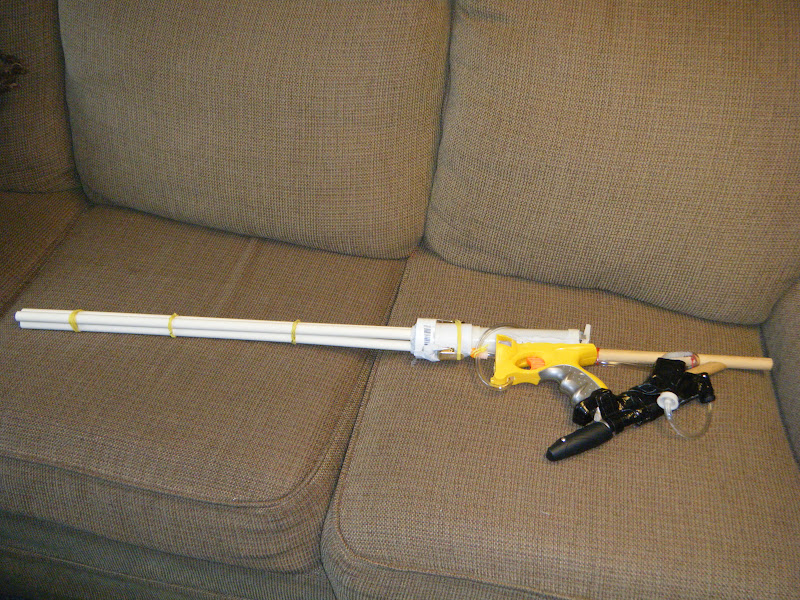 Note the stock is unfinished. 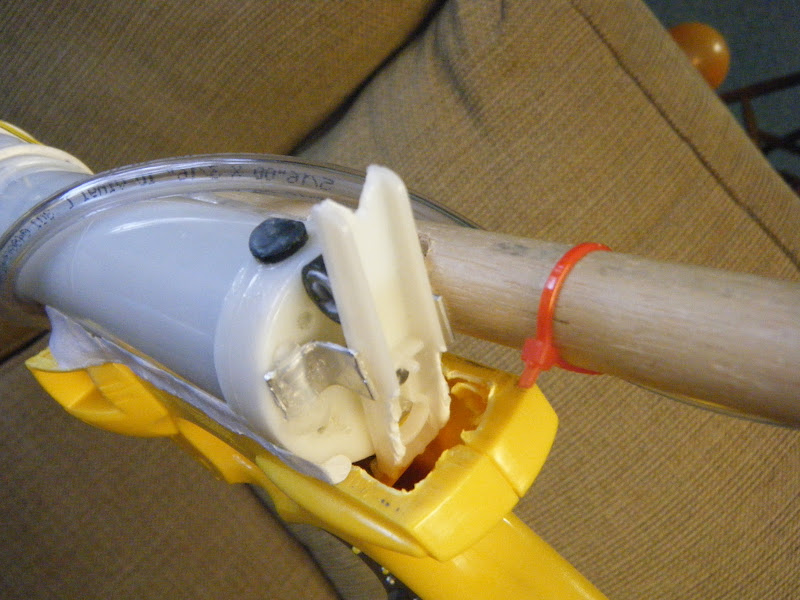 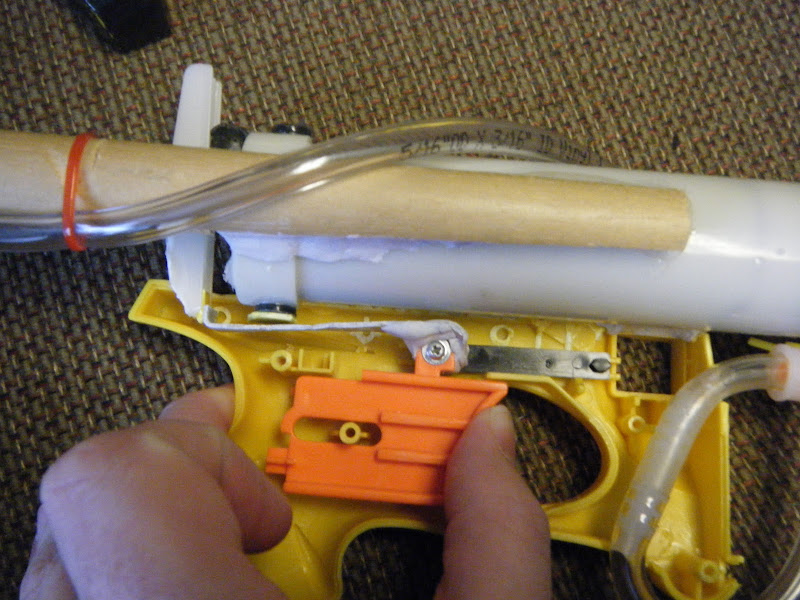 For those who'd like to know a bit about the breech's performance:

It's very easy to operate, you simply unlock the top clasp and the barrel flips down. Insert darts, flip the barrel back up, lock the clasp and fire. It's pretty quick and easy to use. For the moment the breech does have some leaks due to improper spacing of the gasket such that it does not fully engage with the PVC pipe face. I intend to fix this with some kind of shim to compensate for the depth problem.

Right now, with a fully pumped Pulse Strike tank attached and 2 foot CPVC barrels I am estimating an average range in the 70-80 foot range fired flat, even with leaks.

Fantastic, this same concept could be applied to any couplered gun for rear loading without having to remove the barrel entirely. Kudos to you.

This is genius, I'm going to implement this on my Shitcannon as soon as I get home after Finals. So just to be clear, the barrels sit in the 1.5" coupler correct, and not in the pipe? In other words, it goes gun -> 1.5" PVC -> 1.5" coupler -> barrels? The reason I'm asking is if the barrels are in the coupler, you could do an Absolver type setup with 7 barrels instead of 3.

Also known as One Winged Angel

This would have helped my quad-inline shotgun from about a year ago, which liked to pop off of the big-blast that powered it, even when it was rubber banded on and I was holding it. That said, why the absurdly long barrels? And if you're not doing something silly like hoppers or rscbs or inlines, why don't you just pack multiple darts in a single barrel?

Drax: Well, the barrels don't fit in the bushing- the couplers do. Then the barrels go into the couplers. Also, please please make sure to roughly test fit everything in store while you're carrying it around- I have seen 1.5" bushings that don't work with 1/2" CPVC couplers depending on what brands are used etc. So yeah, the bushing acts as the front of the breech, so you attach your couplings/barrels in there. If you upgrade the size (which would be easy enough) you could of course add more barrels as you see fit. So yes, tank -> PVC pipe -> bushing -> coupler/barrels

Kanethemediocre: As for number of barrels and the length I chose, I did that for ease of use. Right now it's set up so I can quickly load 3 darts and fire them a good long ways in a 3 shot blast. However, I have done some real crazy shotgunning with 1 foot barrels instead of 2 foot ones, packing up to 6 darts in each barrel for a max of 18 shots in one blast. And yeah, assuming the darts are mostly uniform they will all leave the tri-barrel and go maybe 30-40 feet.

However, the real reason behind 3 long barrels is that I can fire a smaller shotgun blast at long range and not have misfiring. Because of the way the breech is set up it's a mega pain to deal with one barrel not fully discharging the darts, since a second shot will require loading two more barrels or plugging them. The length is needed since the PS would waste most of the air in smaller barrels, which in this case would be bad since it's more likely for one dart to exit well in advance of the others, causing the pressure behind the others to drop before they can get up enough speed to exit the barrel. It's a finicky balancing act, but one that pays off nicely when you can hit a 1 foot spread with 3 darts at 60 feet consistently, and a little more spread at 80 feet.

Sorry for the double post, but something else I thought of doing with this kind of a breech (but have not done yet) is to not fix the bottom clasp, and allow the entire front portion of the breech to be removed and swapped altogether. This would be what I'd do for a more dense short range shotgun, where the front of the breech + barrels would essentially act like a large swappable shotgun dart cartridge. This would be reasonably feasible to use in battle as well, since the PVC extension on the tank portion of the breech leaves enough room to add a hopper/single barrel in the middle. So one could simply pull off the single barrel/hopper/whatever and latch on a shotgun attachment, etc.

Very nice job on the breech. If I get a pulsestrike/titan and shotgun it, then this will come in very nicely.

I respect Kane, but I will have to side with you on your reasoning of multiple barrels as opposed to shotgun loading.

Heh I was going to save my first post of something of my own, but this is just super neato.

As a shotgun user (I have like no aim, none at all.) this is the best idea ever for me a since Talos.

You know you could do a 3 barrel rscb type thing.

I need to get to work.

A 3 barreled RSCB or hopper would be evil. And awesome. Oh, and I found out that this breech performs slightly less well in extreme cold, due to contraction of the breech seal, however it hardly matters since the change in dart fit (they get looser in CPVC) compensates for it.

Since this breech works well with high volume guns I'd love to try it out on a HAMP some time.

I guess some of the credit should go to Taerkitty for suggesting the Pulse Strike as a good shotgun candidate, and for showing me his(her?) dual barreled setup. Taerkitty didn't have the breech, but it fueled my imagination.

Secondly, I'd just like to add that with some creative modifications, I have got a way of using this to break-action an entire turret for rear loading. It involves placing the intake tube from the tank further into the deadspace of the coupler with a foam disk attached to its face. This then is closed against one barrel of the turret, but when it's opened then all the barrels can be loaded from the back. It needs a good deal more work, since the seal is even worse, and if the seal with one section of the turret is bad then all the barrels will fire at once. XD Which is hilarious but a pain when you want to make it operate like a turret instead of a shotgun.

I just thought of this after reading this topic http://nerfhaven.com...showtopic=16566 , similar ideas.

This is why I said it'd be evil.

Also, thanks for the heads up on that other breech design Blue. It looks good, and proves I'm not the only one who likes to build break action barrels. I like the magnetic catch, but it looks like it'd maybe get jostled open too easily in the midst of a fire fight.

Ah, I was working on something similar, except I added a hinge to mine, never finished it though, but I might come back to it at some point. Yeah, I avoided using a hinge like that for one primary reason- I needed to move the hinge pivot point away from the breech to increase it's "turning radius" if you will. It allows the mating parts to mesh together at a greater depth than if the turning radius was smaller. I don't know how else to really explain it.

That's pretty neat, kind of reminiscent of THIRST's (I think it was him, not sure though) PAS.