1. remove all the screws holding the pocket blaster closed

2. cut the end off the barrel off the pocket blaster and drill out the peg the dart sits on. 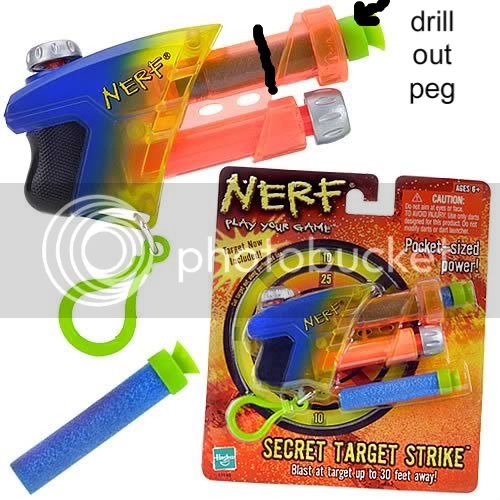 3.make the following cuts on the tech shots shell, this is where the barrel of the pocket blaster will be

4.open the tech shot and pull out the barrel and plunger assembly

5. the barrel should pull right off from the plunger tube,then slide the cpvc over where the barrel used to be, it should fit perfectly glue it on if you want.

6. replace the plunger and barrel assembly and make these cuts to the inside of both sides of the shells,
when cutting the hole for the pocket blasters trigger only cut out the bottom of the shell
the pic wouldn't work so here is a link

7 place the pocket blaster in the area that used to hold extra darts, glue it in if it moves around too much.

8. close the case and put the screws back in.
tada! a fully modified and integrated tech shot

Is anyone in the first robotics Competition? i am on team ursa major

this is the first clue as to what this years competition is.this is where another clue is at http://www.usfirst.o...nt.aspx?id=7700


we will also be to Chessie this year.