So I've been working on some Rapidstrikes with Blade 180 motor swaps, and the motors that I ordered came with PTC fuses on them. To my understanding, these essentially operate like self-resettable circuit breakers. My question to those that have used these motors for swaps before, is it really necessary to bypass these fuses or is it beneficial to just keep them for reliability purposes? Battery supply is a 3S 25C LiPo.

So I've recently come into possession of a used Rapid Fire AS-20, however its condition is somewhat neglected by the previous owner as I picked it up at a garage sale for 50 cents.

Anyways, I got it, tried it out, and it seems like it won't store air. It pumps, the bladder (or what I assume is the bladder) fills, but the pump handle shoots back out on its own and it seems to lose some of its air pressure when that happens. Also, it cant mass enough air to fire and cycle at all.

I've opened it up and checked it out, traced all of the lines, and all of the tubing and valves are functioning, however the I believe that the problem is the actual pump. It was a b*tch to open (and the little black box on top was still glued on) so I'm assuming that it hasn't been opened before and everything is still correctly assembled inside of it. Can anyone confirm this or point me in the right direction to look for the problem? Thanks.

Well, hopefully this constitutes a good enough first post, I've been hanging out around here for awhile now and my write up for an Armpede isn't quite done yet.

Okay, so most people with Longshots have noticed that Elite darts jam like a mother, due to the nature of the new Elite dart dome (it collapses less than streamlines) and the way that the LS dart tooth works.

The Problem: After messing around with the mechs, it appears that the direct cause of the jam is due to the Elite dart dome not being pushed all the way into the bolt, thus it will jam by part of the dome getting caught on the dart tooth as it retracts downward.

The Fix: (Easiest to do if the AR is already out; here's the link if you haven't already done so: AR mod guide). There are a million LS basic mod guides out there, I'm sure I don't need to explain how to open up a LS and pull out the breech and sled assembly. If you haven't already done so, you need to shorten the dart post. I do it by just grabbing it with a pair of needle-nose plies and twisting it off, it's getting trimmed down anyways. It works best to remove the post but leave the stop at the bottom of it where it connects to the walls of the bolt. Take a 1/2" butterfly bit on a drill and hedge out the breech (it will take off a very thin shaving from the inside of the breech) all the way to the bottom of the dart post (where it connects to the wall of the bolt). 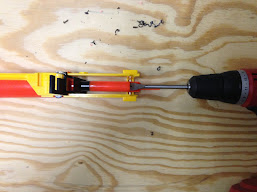 This is a butterfly bit. It also has other names but this is what I'm referring to. 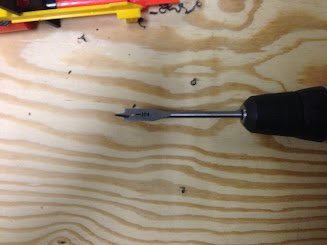 This is what it looks like after you hedge it out with the bit (AR also removed, Dart post shortened to base, Base of dart post remains, Plunger rod is not pictured). 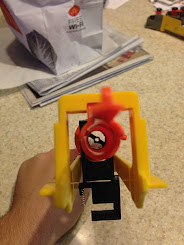 Stock, an elite dart will go into the breech this far before it encounters major resistance. 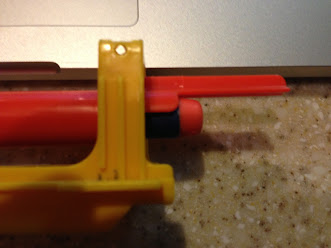 Modded, it should go in this far before it hits major resistance. 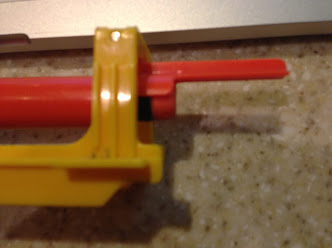 And there's the fix. Before doing this, I was getting maybe 12/18 shots out with Elite darts. Since doing it, I haven't encountered the jamming problem again.

Note: If you completely remove the dart post and its bottom piece where it connects to the walls of the breech, you will need to add glue, epoxy, or some other material to the rear inside of the bolt to prevent darts from vacuuming all the way back into the plunger. This is why I prefer to just drill into the breech until you hit the bottom of the dart post.