31 replies to this topic 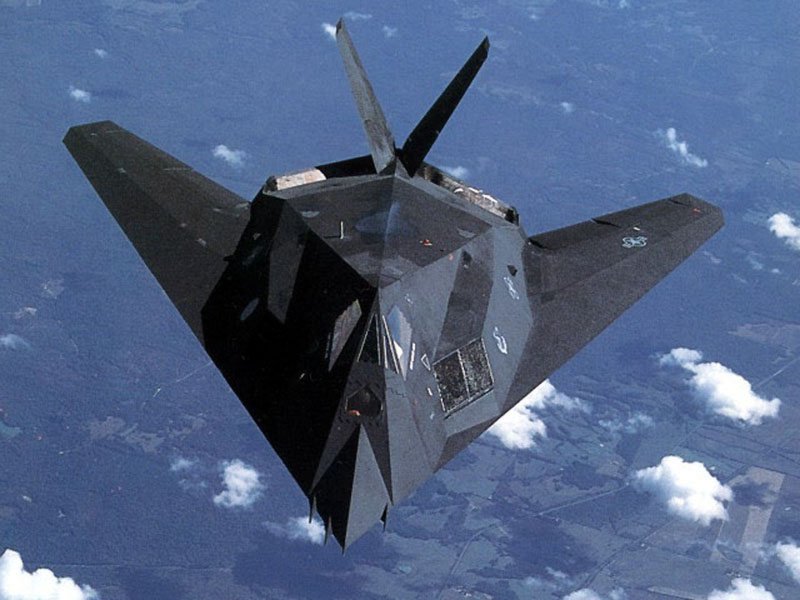 The F-117 was my first favorite aircraft. Being a child of the late 80s and remembering the first Gulf War, I had a small plastic toy of one of these badboys. I remember running around the house pretending to be performing bombing runs on Iraqi forces with that thing. Oh the memories.

My favorite copter would have to be the Commanche. It's such an amazing killing machine.

Unfortunatly the comanchee was canceled it the year before it was to be released.

I hope you all won't think that i'm getting long-winded on this topic, but I actually have a short story attached to each one of my favorites. You see, I was stationed at Pope AFB in North Carolina a few years ago and I got to see alot of planes in flight during my travels. So here are my favorites.

This is, by far, still the most vicious bomber in the fleet. What you see on the ground around the plane is the maximum payload of ONE B-52 bomber. Although the B-2 is supersonic, it would have to return to base at least once to carry and deliver this payload.

When I was in Oman for the buildup of Operation Enduring Freedom, we had gotten in a copy of this same picture with a caption underneath that said, "The home team has was the coin toss and has elected to receive."

The horror stories I could tell you about this bomber, and I don't mean what damage it has done, but what a bunch of idiotic engineers have done to it, would make you cringe and laugh.

One of the planes that gave me the passion to join the Air Force at the time. The Blackbird still holds the record for the fastest plane ever as well as the record for sustained flight at high atlitudes. It has since been retired, only to appear for airshows and as the chase plane for the F-22 Raptor when it was still in development.

If you ever go to an airshow that will have the Blackbird making an appearance, pay close attention to the sky when it makes it fly-by. The airshow at Pope 2001, I believe, had such a fly-by. You saw the plane for about 4 seconds. About an hour later, the Blackbird's maintenance crew flew overhead, consisting of a C-17 and two C-130s. If the plane ever breaks down too far from its home base, the maintenance crew will arrive wherever it lands in about an hour.

The ultimate fighter for the 21st century. The F-22A Raptor. (Fuck, that sounded like a work Boeing and Lockheed)

Anyways, how can you possibly beat a fighter that has stealth capabilities, can engage both air and ground targets simultaneously, is able to break the sound barrier without the use of afterburners and can cruise at supersonic speeds.

I have no story for this one only because, at the time when I was in California and had a chance to see one, the security clearance of my entire flight crew wasn't high enough to even get on the testing base. I eventually got the clearance needed, but there were no openings at the base for my career field.


Finally, one that is dear to my heart. The one that I became rather intimate with.

This was the mainstay of the cargo movers for Pope AFB. I was a part of the 2nd Airlift Squadron, the Lancers. The maintenance teams lovingly called them "Herkypigs". The Herks on that base, in particular, have a colorful history. One, tail #68-0939, had been given the name "Frankenherk" since the fuselage and left wing were its own, but the right wing came from the boneyard in Arizona and the tail came from a plane involved in a crash at Pope in the 80's. Another plane, tail #64-0495, has been worked on not only by myself, but by my uncle during Vietnam. Yet another plane, tail #68-0942, supposedly was haunted after a accident in which an Army jumpmaster-in-training got his head torn off during a routine jump sortie. Hell, we even had one literally fall apart in flight due to some shoddy maintenance from our sister squadron, the 41st Airlift Squadron, the Black Cats. It seems that they remounted an enigine with old hardware. When the plane was in flight, the #4 engine decided it didn't like to be flown by the cats, so it tore itself off of the wing and rammed itself into some swampland. The plane had to make an emergency landing at the Fayetteville Regional Airport where it sat for over a year, slowly being cannibalized by us for parts, before it was deemed a total loss and was sent out to the boneyard to die.

HOLY SHIT!!! I just noticed when I was reviewing my post that the C-130 pictured here is from Pope!!! On the nose of the aircraft, under the co-pilot's windows, there is a picture of a Gryphon, which was the symbol for the 43rd Airwing, which my base was a part of. Also, the nose itself tells me that the plane was from Pope. There were only two bases in the Air Force that had C-130s with that nose radome configuration, Rammstein AB in Germany, and Pope AFB in North Carolina. Now if only I had better photo editing software on my computer, I would be able to tell what tail number it is.

You said the b2 is super sonic-it is actually high subsonic. I also noticed you said it could carry that load which it cannot. I think you are reffering to the b1b whitch can travel supersonic and carries the largest payload of any bomber.

You said the b2 is super sonic it is actually high subsonic.

You are correct about this one.

I also noticed you said it could carry that load which it cannot. I think you are reffering to the b1b whitch can travel supersonic and carries the largest payload of any bomber.

This comment, however was a misunderstanding on your part in what you read. Though I am incorrect concerning some of my data, I had stated that the B-2 bomber would have to return to base at least once, as in make two bombing runs, to carry the payload of a B-52 bomber with only one run required. You also have to realize that I never worked on any of these planes except for the Hercules and I have been out of the Air Force for three years now, so what we got briefed on concerning specs may differ from now with aircraft revisions.

You are right I thought you said it would have to refuel to do that thats my mistake. I want to join the air myself and I am wanting to go into either the f-22a program, the a-10 preogram, or the b1.

I PMed you since my response was straying from the topic a bit.

ALL YOUR BASE ARE BELONG TO US
Back to Off Topic