Ok, well im new here but after reading alot of the stuff in the forums, I hope I dont violate the code of conduct after seeing what happened to the last guy, but here is my question. Would it be possible to create a nerf machine gun out of scratch that can
1. shoot really fast compared to all the other guns
2. will be belt fed ( if possible )
3. not be too hard to make

So I hope im not being too demanding about this question, and I someone can shed some light on this topic, please. Thank you for listening.

It is a good idea and im sure some of us nerfers and nerf modders alike have had this idea pass by there minds But Razor blast or chain blazer dont remember which one has the belt fed idea however you want a fast firing Mechanism Rf20 is the way You would have to somehow form those together.

You said scratch right? Well the person whose opened the door for all of us in that area is Boltsniper You should look for him He made the legendary FAR a bolt action rifle. Hope Ive helpd Welcome to nerfhaven.

Yer buddy ive had this dream before and am trying to put it to work. Look at the FAR in the homemade link and try and base something on that. I was thinking you could maybe hook a little motor up so when you fire the round off the motor will pull the bolt (and plunger) back and forth really quickly.

The other thing ive learnt from this site is buy some guns and look at thier guts then see how they work and how you may take some of that technology and put it into a homemade. The other thing you could do is seems how boltsniper has built a combustion propelled gun you may be able to use that concept and make a recoil system. Another option is try for a gattling gun. Look if you decide to continue on with trying to make the automatic weapon of your dreams by all means go for it and i would be most happy to help as much as i can but on one condition.

IF you do create one and it works out you HAVE TO put pictures up and give a write up so i can try and build one.

I think you're best bet would to be to convert a cheap electric spyder paintball gun, however you would need a reliable feed system and considering that it's full auto you'd probably need shells. I think with the right idea and adapting the far design you could pull it off but it would mean alot of R&D time. You're other option is to convert a rf20/wf/pc piston to do the same thing and it would be cheaper.

And as everyone knows, money makes the world go round. It's also the root of all evil, therefore the world going round is evil, and we should stop the rotation of the planet.

Seriously, when did our board become retarded?

No, you cannot fullfill those 3 things. I'm not telling you it can't be done because I once saw a man that did this thing with a garden hose I thought was impossible. While I don't like talking about that incident, I would have said it can't be done. So what I'm saying in a very disturbing way, is that you're idea is impossible, but I say the same thing about Bolts guns. The difference between you and bolt is simple. 4 years at Virginia Tech. Sorry dude, I doubt you have those credentials.

You should go to TRU, get a few guns, try modding them, and call it day.

ok, maybe that cannot be done, but could you do it if you baught a really cheap automatic paintball gun, and then take it apart and rebuild it using some of the mechanisms to build a gun that shoots darts, or is that still asking too much?

Let me add some insight here. Now, it's true that I'm an electrical engineering major, which means I don't have anywhere near the experience of a Master's Student in Mechanical Engineering, but I have a couple of experiences that I can relate to this.

In the general engineering classes that I was forced to take, we had several group projects. All of which basically entailed taking a box of crap and making something that fits a problem statement (hence the name, the MacGyver Project). So you'd get this box and be like, "This is pretty easy. We don't have to meet do this until the night before." So your group would talk in class, come up with some so-so sketches on the computer and hand them in. What happened the night before the deadline? Meltdown. Nothing worked the way it was intended to in your brainstorming and sketches, and now you'd be in front of your engineering professor (most of whom are Godless creatures) with a pile of crap that didn't work. Want to take a guess on your grade?

I'm sure even boltsniper does a fair amount of manipulating of the parts and the design during the early phases (and maybe even the later ones) of his projects. This is because even when you run the numbers, sometimes things still don't work. It could be a result of you not taking something into account or a faulty part. And when things work, you need to test that they do over and over and over and over again.

The point I've been blabbering on about is this, you don't know until you try. Unless it's a perpetual motion device, we can't give you an answer. Homemades at your age are for espiring engineers, because you need to do a lot of problem solving to get them down. If you want to make something that bad, go out and buy the parts you think you need and try it.

Homemades are a greater financial risk than modding, and unless you are damn good at modding, I wouldn't try homemades if I were you.

Shindig of the Lawn Chair Mafia

A while back, I'm talking back in the days on Nerf Online... I made a full auto. Keep in mind that this was before the Wildfire and the closest thing to full auto was a Razorbeast or Chainblazer. Everyone thought I was lying because I has no pictures to back it up, but I made it and here's how.

I used the standard Nerf ammo belt used in chain guns. I used the rotator off of a broken Chainblazier. I used a motor off of an old RC car to rotate the belt. The air source was a small rechargeable air compresser, like one you keep incase your tire goes flat. I put all the electronics and the compresser into a wooden case. The case was pretty much a box that was 10 inches high and 1.5 feet long. The switch to the compresser stuck out of a hole cut in the side of the box. On the back was the trigger, which was a switch that turned on the motor to rotate the chain. On front, I attached a 2 foot section of 4" PVC. I mounted it a heavy duty camera tripod. The overall look of the gun was that of an old Maxim machine gun, like so: 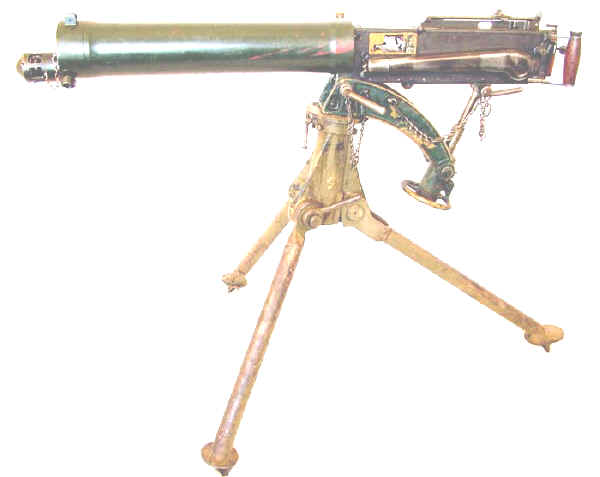 The range wasn't great; on a good day it would hit 35-40, but the cool thing was that is would spit the foam. I wasn't trying to make a pratical gun, just something to mess around with.

hmmm so I guess that kind of answers the question, that you could make a mg but it would take alot of time and resources. Maybe I'll just stick with my unmodded rf 20.

P.S. boltsniper have you make a write up on your pistol from equalibrium, because I've been wanting to see that for a week or two?

Sanityjr, talk to Falcon, he's mostly active on NHQ. He's made a belt-fed RF20 using the rotation mech from the gun and just adding a ton of brass barrels in a chain. You'd still have to pump it between sprays of darts, but it would retain about the same range as a normal one but with 100+ shots.

I would say a SAW of some sort with a box magazine powered by C02 would work great. Chains are not the BEST way to go. Thus why Magazines are used more. A belt is either unable or harder to load plus, for the size of a box mag., a chain can get hung up while retreating ofr rushing and break apart. I suggest a box mag. if someone attempting this.

c02 takes all the sport out of nerf.

It's like hacking a grade three learn quest game so you can't get the questions wrong.