First Post...here goes..... My attempt at easing into steampunk-ish stuff. Just getting the colors, now need to work on the washing and high-lighting and drybrushing.

A preview. Please pm me what you think of my work, or post on my profile.

The Jean Machine. Now with a much lower incidence of mistaking it for a paintball hopper.

Here is some wonderful work by a fellow nerfer that he did for me. PHILIPPIANS 4:6
Check out my youtube channel for great reviews and modifications:
www.youtube.com/titanreceiver88
For even more detailed Nerf info, check out my blog
www.titanreceiver88.wordpress.com

My unfinished district 9 gun made from a nerf stampede

Pump blew out, so I revived it. New layered bladder with rf20 internals gets at least 60 feet. 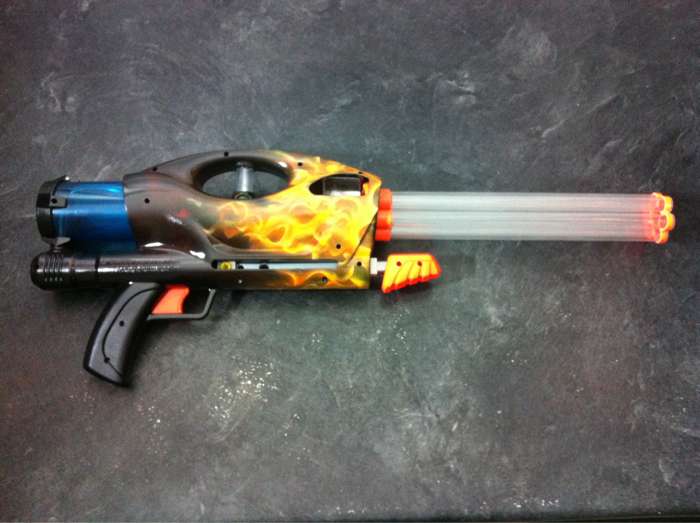 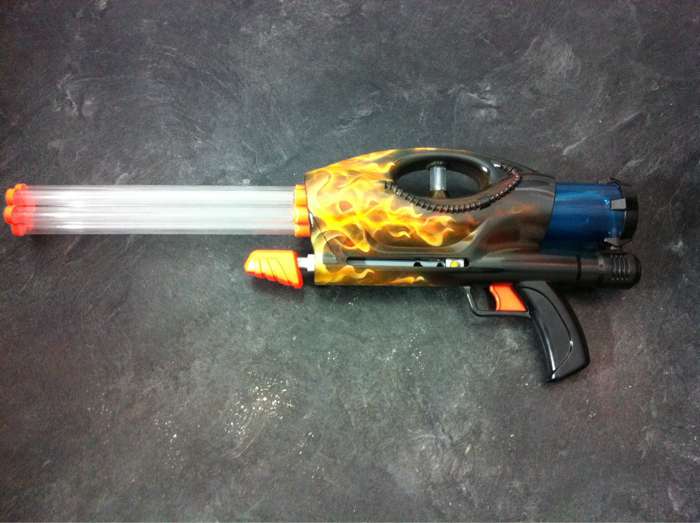 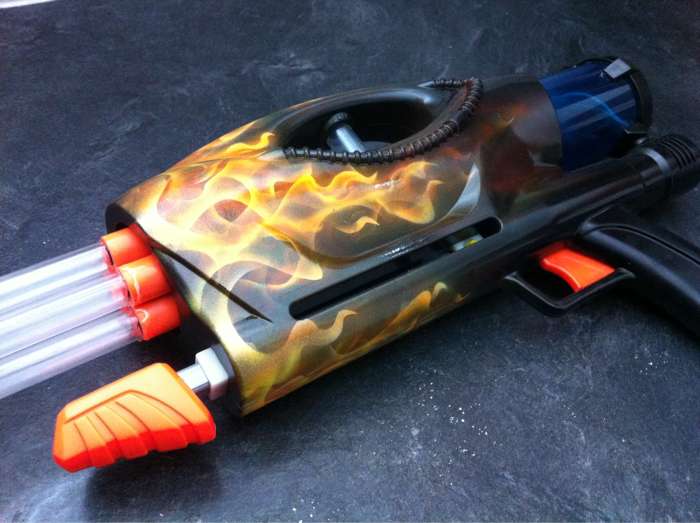 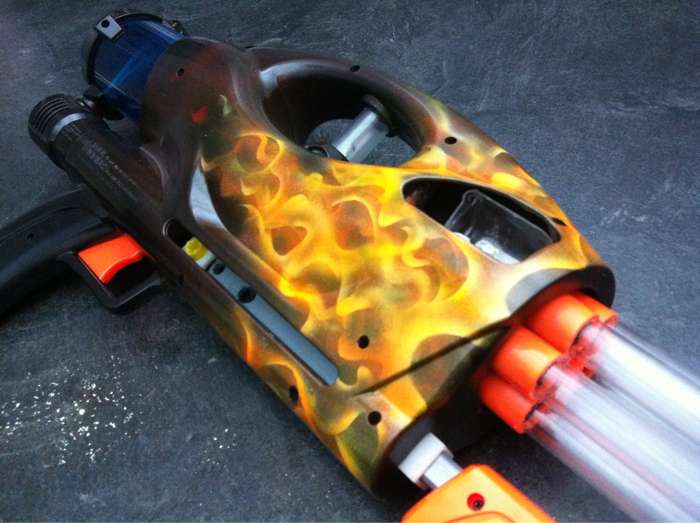 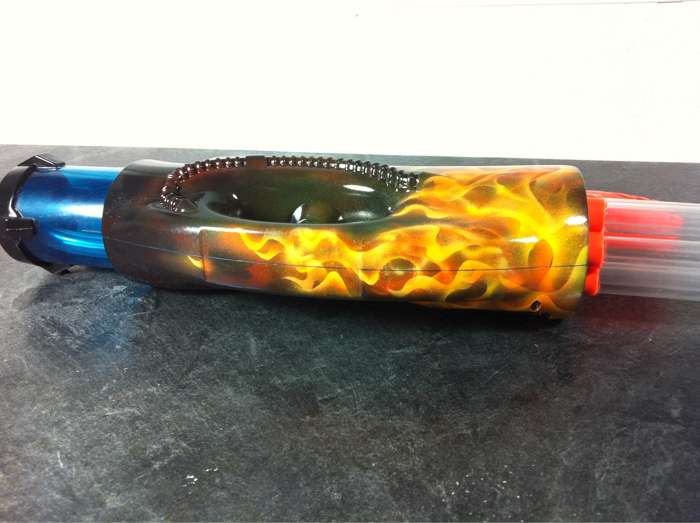 - I kept the auto advancing turret mech.
- Used craft foam on the turret face instead of rubber washers on the tank.
- Added a Magstrike pump handle.
- Replaced the original tubing with 3/8th" tubing.
- replaced the goo gauge with a cheap dollar store LED.

... the flames make it shoot farther,

First mod posted on here... Here's my new primary! I integrated the Longshot's front gun into it, and actually got the coat hanger method of linking the triggers working. It's really not worth it due to how much of a pain it is. Took an entire day to make it work. Nothing too special as most of this has been done already.

If anyone out there needs any helps with using the coat hanger for their LSFG integration, I have like, 20 pics of my whole set up if they could be of assistance.

I Put the LSFG barrel into the Recon Barrel, and put some Front gun stuff on the end for cosmetics. Makes it look much more like a snipr/Assault Rifle than it is stock.

Since the Recon's flip up sights suck, I ripped those off and used their tactical rail clips and bases to create a scope (made from binoculars, so it zooms), and I hot glued the bipod to the other. I'll hyperlink them so I don't post too many pictures.
Recon/Front Gun Barrel
Tactical Bipod
Scope

It fits together quite well, don't you think?

Ooh, and I turned the Nightfinder's LED into a flashlight. In addition, I added a CPVC barrel and gave the plunger tube a near perfect seal. Shoots about as well as my Longshot does.

I also discovered that the Crossfire can shoot just as well as a modded direct plunger system gun like the Nightfinder if you swap the spring with a Jolt's, and also improve the plunger seal. No pic is necessary as all the modding is inside. Considering spray painting all of them, but I'm not that great at it yet and I don't want to ruin them.

The Big Blast is a standard well-done SVT4B.

Now the interesting part: Super Soaker Arctic Blast, also known as the Iron Man Super Soaker. I've replaced the pump with the amazing Kmart Schwinn pump, and hooked the trigger to the top valve. Everyone else I've seen has destroyed the spring-operated part of the ball valve, which to me is a huge waste. It's still fully functional.

This thing is ridiculously powerful, on par or beyond a titan or jobar. It also is usable at many fewer pumps than either. The bladder plus spring activated ball valve (full 5/8 airflow... dayum) setup is odd though when it comes to barrel setups. I haven't done as much testing as I could, but things are all over the place. It'll shoot a tagger from a 5' barrel through 2 layers of cardboard, then poop out a slug from 16" SCH80. Out of what I've tested medium-length loose-fitting CPVC has worked the best with slugs.

Because so few people have these and the tank is so odd, there is little info on proper dart-barrel fit. It just releases air really weirdly.

Recon: Brass barrel, 1st Gen plunger tube with 1/4" polycarbonate solvent welded in for reinforcement, modified seal to not vacuum load, modified dart tooth, and an XPloderZ spring. Yes, a full 9" long spring, pre-compressed to 4.5". Takes forever to put together, but it shoots really far. I'll measure ranges eventually, but i'd guess far past 60'. There are more pictures of the plunger assembly on my photobucket.

Got this from someone dumb who tried to mod it and ended up ripping the shell in half. It's fixed with polycarb and rivets. Everything has broken on this at some point, and much of it is homemade, including the bolt, plunger, spring rest/powerstock, part of the bolt sled, and parts of the shell that were torn up by the previous owner. Again. more pictures on Photobucket.

Finished up a BOSS9-style UMB with a few changes. Credit goes to him for inspiration for the design and for his excellent advice during the build. You can see that the wye is glued directly on the tank, surrounded by 1.5 inch PVC pipe that reinforces the wye. Also, in the back is the stock OPRV, but adjustable. It can range anywhere from 85' at low power, to over 150' at its highest setting. Close up of the wye joint and 1.5 inch PVC reinforcement. Here you can clearly see the white "push to connect" tube connector that I used here, attached to the blue tubing coming out of the side of the blaster. This allows me to disconnect the on-board pump and connect it to a bigger pump, or an air compressor if I'm feeling adventurous. Why did I choose 1.5" PVC to reinforce the wye? Because that allows me to very easily attach a 7 shot absolver-type shell in a 1.5" coupler and plug the wye. planning to add led's before kit is released.

This is my upgraded Dragon-Ninja style Alpha Trooper CS-18 with Empty Clip Indicator.

Painted and volted up a Rayven for a HvZ that ended up getting cancelled due to Midwest weather. effin wussies. BAM! And there's even enough room for extra darts! If only it weren't upside down... Make sure you sand the outside of the case wherever you make any cuts, sharp metal edges are no fun.

Love the Rayven paintjob! I'd love me a Rayven to muck around with... But they're more than double the US$ price here!

NF has had it's air-restrictors removed. The NF also has a slightly longer spring.
The Barricade has been modded further: The on/off switch has been moved to under the trigger, so it turns on when you pull the trigger, and it now uses 2 14500's (and a dummy) to power it. I also put a battery-alarm with display in the back, so I can monitor the state of the two batteries (independently and combined, it continuously alternates between #1, #2 and All).

Playing with Nerf 'cause I want to...
Currently in possession of 2 Mavericks, 2 Jolts, 2 Reflexes, Nitefinder, Barricade, Recon, Stampede

Pressure gauge on the side, goes all the way up to 120psi, but i coubt that can be reached.

View of stock OPV nested in rear of pump tube with a 1" coupler over the top for a stock.

They say first impressions are the most important...

Added a stock to my Xploderz with a trigger: Just 2 screws holding a 1/2" PVC endcap on the back of the blaster: