Because I thought it would make it easier to sell to HvZ guys here at TAMU. No OMW stuff, just AR removal.

Tank expanded, knock-off Sonic Bazooka. One of my more ambitious projects. I wasn't sure it would work out, but it sure did! I wanted a cheap and easy primary-worthy blaster to bolster my dwindling fleet of loaners.

It's a little awkward to hold at first, but it isn't too hard to handle. The handle is a wee bit small though.

Found the blaster at Big Lots for $8. In total, the project cost me around $10, with the inclusion of the pvc fittings. All in all I think it's a success so far. Just took it out and it's hitting around 100 feet with 8-10 pumps. I'm sure it can do better, but I don't feel like I need to push it any farther. Going to officially put it through it's paces on Saturday.

Cuz every now and then a man has to bust a ball.

Here is a Titan with one of it's few dwindling war-approved uses.

Dear god, what is that thing.

This is a contract I just recently finished for WicketTheModder619. Its a brass breech Longshot that accepts both streamline and stefan darts, has an AT2K which is integrated into the LSFG which is integrated into the Longshot. Its almost like Inception here... Haha, but the neat part is, I kept the turret fully functional, which I've never seen anyone do before. I never had to trim the pump either, so the AT2K functions as good as it would in its original shell. The Longshot itself has the works and gets 120' with streamline darts with a BBB spring addition. How I managed that, you ask? I MILKED it for every ounce of power, that's how. Imagine it with a stronger spring!

If you guys want contracts, I do more than just Longshots, PM with any questions!

Ignore the epoxy putty ramp I had to remove it.

I also finished my pullback LS

I had to get me some Alpha Trooper love. It has OMW stage 1 because I am too lazy to find springs of my own.

This is my baby, my longshot. The maverick on the front is removable, and there are many options for the front of this gun, its an awesome master key.

My SS2 with 9 in cpvc barrels.

And the secret barrel still works! This is a non-contract AT3K overhaul. I did it for myself, so it'll either be my primary or a loaner this Thanksgiving Thrasher I'm hosting. So if you wanna shoot it, come to Arizona in November.

Anyways, its got the works, 12" PETG barrels, Hornet pump, I bypassed the goo-gauge, rear loading turret, 100% air seal, and a few cosmetic mods.

The spacer at the end of the barrels is part of the original turret. I sawed off the barrel rings that attached to the center stabilizer, bored them out so the PETG fit snug, and hit it with a heat gun to restore the original plastic color. (I may do a how-to thread on that for those of you who don't know what I'm talking about.)

Other than the paintjob, the first thing you might notice is that there is no hole where the original priming handle once was. I filled it in with a little Bondo before painting, it looks really clean this way!

I made the rear loading hole as sleek and clean as possible, I think it turned out good. I don't like the massive gaping holes, I did it just large enough to do its job while still following the curves of the gun for appearance.

And last but not least, the goo gauge isn't a goo gauge at all! I made a tiny wave bottle out of a 2" PETG section. I filled the ends with glue, filled half the vile with water, added 2 drops of red dye, and filled the rest with canola oil. I then capped it and put it in. Now I got a super badass wave bottle in my gun. I replaced the goo gauge with the PETG because the goo gauge isn't as clear as I'd like it to be, and the ID is rather small, so the effect is kind of ruined. All in all, it turned out pretty badass. It gets pretty damn good ranges, I'd say I'm hitting around 140' or so, it hits harder than my SM1.5K.

NF I did for a friend before she went back to Penn State.

NF Rifle I did a while back.

Used a mesh laundry bag as a stencil. 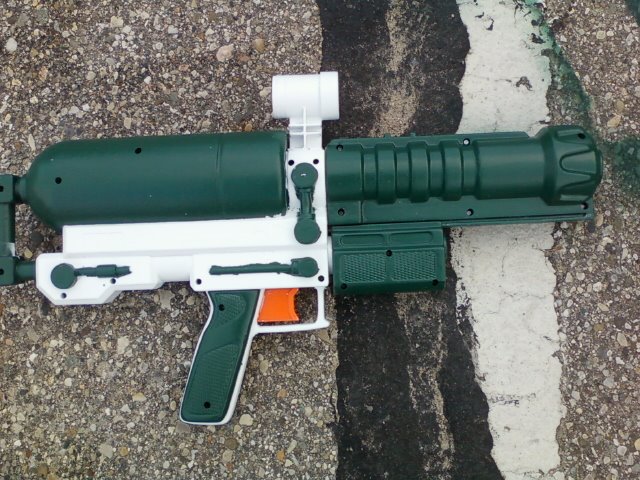 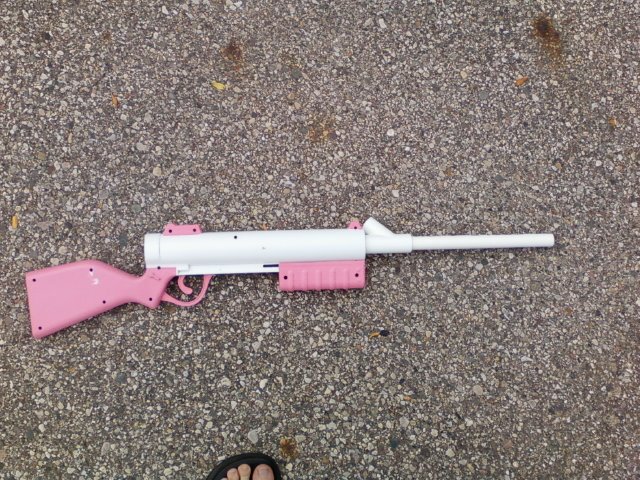 "The Humiliator". Spring added PAS with remade plunger rod and reinforcements; hitting 90' with hopper of slugs and a 1' PETG barrel. For sale, pm me please.

Handcannon, hits 120' with the FF turret, Hits 100' with a hopper. Has a whopping LS, PAS and [k25] spring combo. XD Has Zorn's plunger draw increase, and full reinforcement.

Homemade internals EaB, would make a writeup, but someone (cough) moosa (cough) won't sell me one for a decent price. Hits 100' with a Brithopp. Also has a plunger head made entirely from True Value parts, I think that might be a first.

I recently acquired a supermaxx 5000, these are the mods so far, paint job to come soon. This gun is going to be designated to my dog Indy. He died the same day I got this blaster. The paint job will reflect this when it is finished.

Look at the sticker!

Still has the attachment holding brackets and the arrow shooting barrel.

Beautiful shot of it.

Any questions, comments, or flames are welcome. (PM's)

Sodizzle CPVC Breached Longshot (internal shot is close to the final setup... there was a lot of little tweaks that needed to be done)

Special thanks to Taerkitty for the broken AZ Punisher:

Depending on how you look at it, I now have either a Punisher that takes Vulcan chains, or a Vulcan with a bad ass front.