The first ever pump action Rapid Fire Rifle? The range is still 25 - 30 ft. Check out my video here. 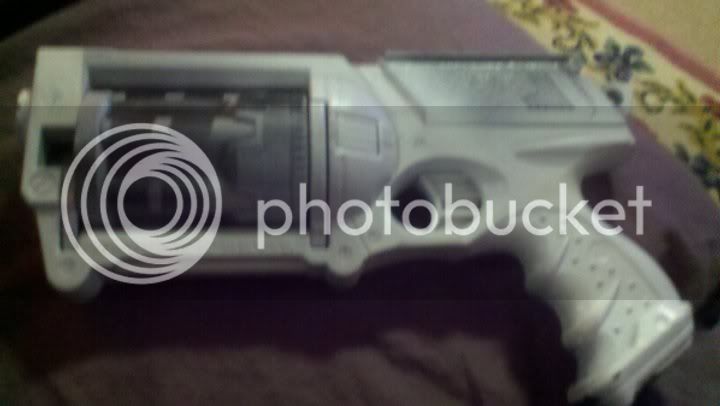 Administrative Edit: I fixed your pic. IGNORE ME!!

Just a little work in progress, although both could be finished soon. (The torrent at least, because that blasters sweet as hell!)

Some tips for the Torrent.
1. You can advance the turret without priming by half-pumping.
2. The ejecting shells feature is optional! It took me a while to figure out that you have to push further forward on the pump if you want them to go.
3. Cut off the jutting out bottom of the back grip and it's not too bad to hold. With a rasp I can almost get that maverick handle to close over the stock one, although I wish I had tried the wider feeling Recon handle first. I will rasp at it a bit more before I glue it down tomorrow, but it feels about a million times better already. I really don't understand Buzzbee's handle design philosophy. The handles have to be small even for their recommended age of 6, and why isn't the rest of the blaster scaled down to the small handle size? It just doesn't make sense...

I'll just be gluing in the rebarreled shells for now. Due to the design of the shell/turret long barrels and rearloading would be easily done, but I'm not going to increase the power at this time so it's not necessary. (My mod completion ratio for the year is like 1 out of 6, so I know it would just sit around half opened forever if I tried.)

The eat shit and blast is getting a 2k tank once I get the trigger hooked up, should be pretty fun.

This Tech Target was a commission for Noodle. It has my overhaul done to it, replaced plunger rod (3/8" Square PVC), modified catch and shell (to accommodate the new plunger rod), and a grommet plunger head.

I've been trying to reproduce the crackle effect that Ryan produced on this Maxshot (which is now owned by BustaNinja). Last night, I started hand painting over an already poorly painted TTG. Realizing that it wasn't going well, I busted out a few colors of spray paint and produced this.

I really like the way this looks and I feel like it's a style of painting that will last much better than solid colors, as it already looks rough and weathered to begin with.

By far THE hit from Apoc this year.

Ladies and gentlemen, I present for your viewing pleasure, the most expensive Airtech 4000 in existence, The fabric seen tied where the goo gauge was is a decency shroud, and made my Walmart purchases in NJ very strange. The pump handle's decency shroud is just a sock.

Edit: Another picture added due to public curiosity.

Hey guys, I decided to stop smoking so much and actually mod even though I don't go to any wars and I get sick right before the biggest wars in California.

Yeah, it was a cool design that I thought of when I was on a crazy trip yo.

This was when I was sober, but it's still awesome-sauce.

I decided to try out an extremely weathered style for this pas I was working on.
I might do a tutorial for this technique. 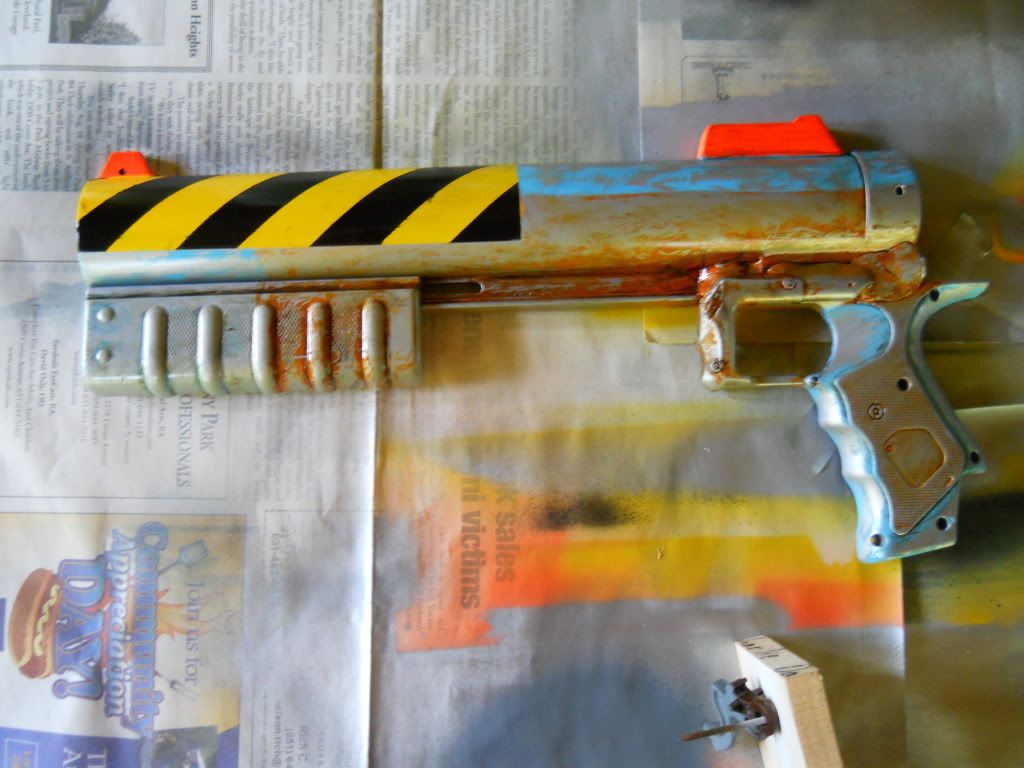 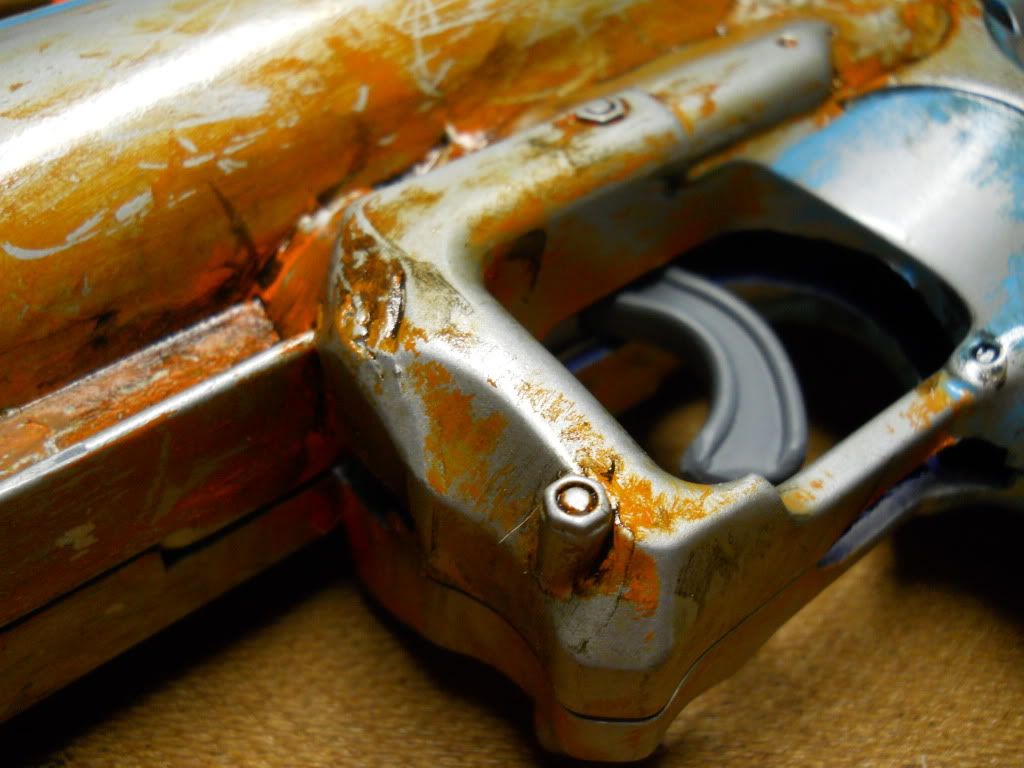 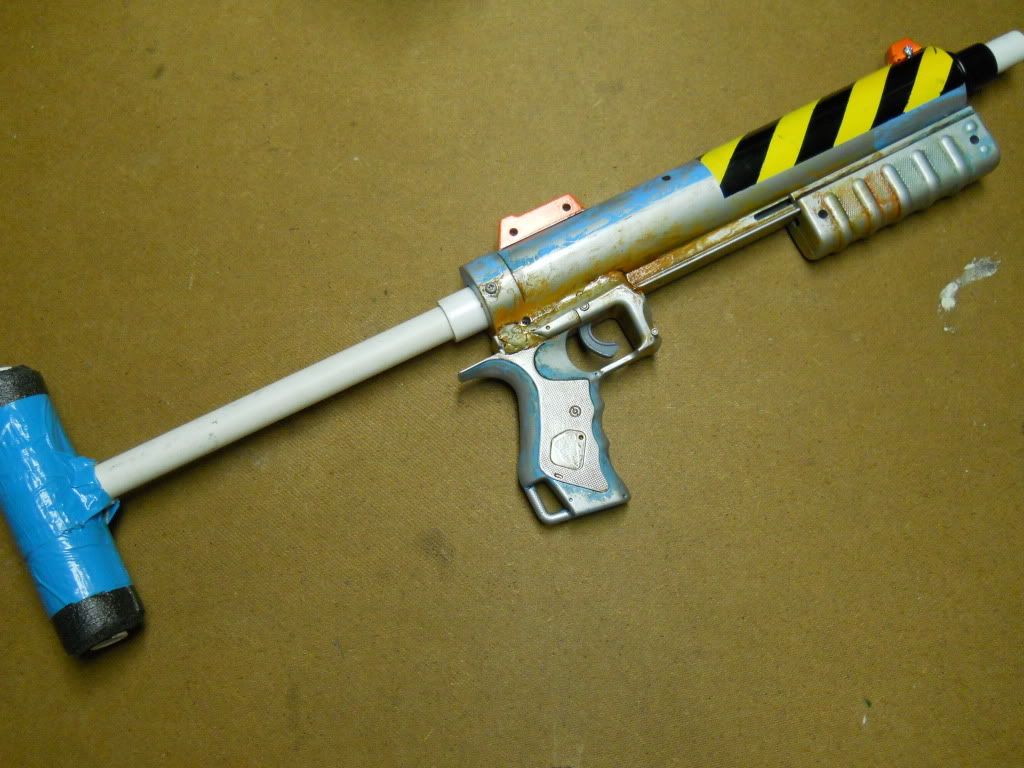 Moderately handcannon'd NF. Shoots just within pistol limits, but still makes a good secondary that can be holstered easily (plus it looks cooler than a normal NF). Has a 1" thinwall plungertube, and an Ace #49 which is just a hair too short with the extra draw this thing has. Nothing major though. I also had to superglue a washer to the trigger to get it to reach the catch for some reason. Overall, a fun little project to do with leftover stuff.

Another crackle paintjob, this time on a Hornet. I used a base of white with florescent pink, orange, and yellow over that. It got a little smudged on the front part, oh well.

I finished the splat:

Yes, it uses hopper clips. I also added a firefly handle. It goes through cardboard with a 14" speedloader.

Zorn style 4b. The tank is really stupid though, if anyone has a spare 4b tank that they'd sell, please pm me.

I also finished my quadshot. 12" cpvc barrels, has PAS spring and a section of [k25], Zorn's draw extension, optional inline clips, sick paintjob, Venom's spacers (fucking amazing, buy some) and a improved seal. Gets crazy range, certainly over a hundred. Some pics of my recent pas. Front two screw ports are somewhat broken. 1 1/4" - 1/2" PVC non-hex bushing, nested in a modified 1 inch PVC coupler, which is then solvent welded in the plunger tube. Stock spring. It's Nerf or Nothin'!

Administrative Edit: This blaster pictured was neither painted nor modded. This is not a sales thread; why would you test my patience?

Is that for sale?

And, and my new primary

Decided to give my 2K a little love tonight.

The gold pattern is a fractal. I did all of the stencils myself in GIMP. The camera flash makes the back end look weird, due to the matte clear coat. It doesn't look that way in normal light.

Out of boredom, I decided to mod this shitty flywheel pistol. Supercharged it (12v battery pack) and altered the clip to accept stefans. It shoots ~45' semi-automatic and holds about 5 darts. Hot glue is my best friend. Overhauled 4B. Coupler for stock or easy access to adjustable OPRV. Scary as hell.

Nothing special, just a couplered BBBB Barrel Spacers and Parts
eBay
Back to Modifications · Next Unread Topic →