One for the Mil-Sim lovers. It's actually really comfy, and works much better than the Nerf version. Also, this one clipped straight without any modification. But I will be sanding the rail a little bit, just to make it a completely snug fit.

Brought out an old friend for a little tweaking, and firing demo......

Cleaned up a few areas of the breech, re-lubed the L/R PT, and added an even larger pre-load spacer :twisted:

Hi! Here are the mods (most of them) that i've done so far

I will paint most of them eventually

A friend of mine is going to do an internal RSCB on it, once i get some money to pay him

My CPVC barreled Firefly, soon to get a spring replacement and a paintjob

Lemme know what you think

Nothing new, just a detachable blowgun for the AT.

I recently integrated an NF into a RFR... They did, They just called them Windows back then though.

Newest additions to the BritNerf Arsenal...

The barri-con needs some work of the pushing arm as it's just a bit too short. As for the Stormfire, that just needs a PJ. Got a brilliant 17/32 brass barrel and a stock NF spring as the power house.

So here's what I've been working on. A slight typo gave this blaster its name. The Extremely Nitefinder. My first version was almost an exact replica of Banshee's, but it was plagued with catch and pump issues, not too mention poor performance from the 3k. So I redid it.

and of course, it lights up on the trigger pull

Here's the video of the firing test.
http://www.youtube.com/watch?v=jhHkGe6sBUA

I said in the video that I'll try to sell this at CATN 3. Why would I do that?

Because I have a nicer, cleaner one.

Yes, it lights up too. Better believe it'll get a sick paintjob.

Plugged SVTMM, I really can't seem to do anything that is unplugged.

Contracts that I did for a friend, RSCB LS with a PETG plunger-tubed NF. LS hits 70-80 and the nightfinder hits around 50'

I built this for the leader of my school's robotics team, since he just graduated. He had seen some of my guns before, and he kept telling me all year that he wanted one. This is going to MIT.

It has an AT2K tank inside. The barrel is a piece of Mcmaster PETG, with a delrin spacer that sandwiches the aluminum plate on the front.

The pump handle was done on my lathe, and is made of delrin.

As you can see, it's basically a singled 2K. There's little to no dead space, so it's quite powerful.

I was bored yesterday when I came home from an airsoft war, and I decided my Nite'n Load needed some love, so I made it shoot a lot farther, smoothed it out with bondo, and gave it a great new paintjob.

(My camera flash does not like the white PJ.)

Up close on the Effeminate handle detail:

Here's a picture of it primed and with it's breach open.

It gets right around 50ft. flat with slugs and a little over 60ft. with glue domes. Hits around the 50 foot range.

RETRO IN THE HOUSE!!!

EDIT:
Decided to finish it 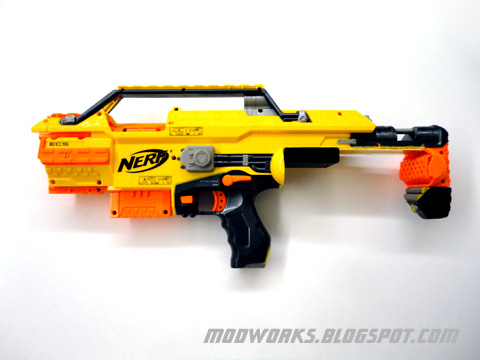 Gaps covered by assorted bits and pieces from chopped out parts (guess which parts the bits came from?). 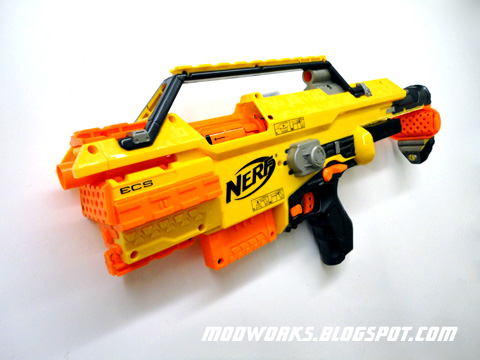 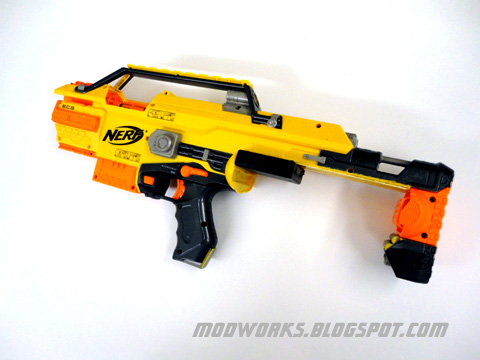 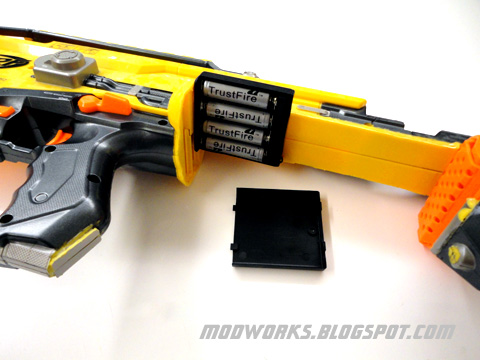 And this is what i call... the "SpamFire" Combo! 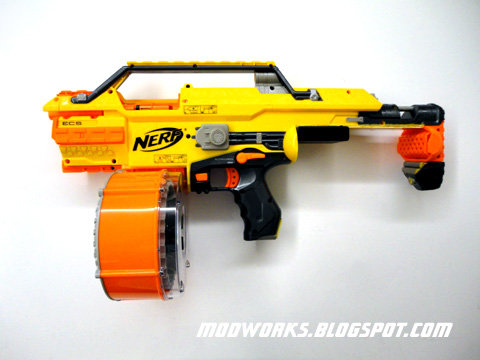 I helped a friend clean out his place and we found this at the bottom of his stuff. He gave it to me.

Supa' foldout! It's a Lost World promotional Hidden Shot. I took out the peg to shoot stefans. They shoot as far as stock darts do: Four feet. Got this EaB from taerkitty. Gave it some love. Still needs more love.

LnL I found in my first month of modding, which was stock when I got my hands on it.

The last details will be sure to drop jaws........coming soon.

WIP
Taer would be proud.

It's a new plungertube added to a pistol splat, Sorta like Taerkitty's Spritzsplat. It isn't done yet, but is already insanely awesome.

Beginnings of a stock:

Loads into the inline clip through the ejection port, holds 9 1.5 in stephens

Pump in front, with a pump guide rides along the barrel

Think its quite good seeing its my first.

Some stuff I worked on yesterday:

^This thing shoots just so surprisingly far. I picked it up mad cheap from imaseoulman last summer at BCNO, expecting to just rip the tank out of it at some point. It's been sitting around in a box since then, and I'd never fired it. I shot it the other day, and it's crazy. So, I cleaned it up with some etape, and made a new pump handle, cuz the little one's just not comfy. Oddly enough, I may find myself using a ramrod instead of a hopper/RSCB/speed-loader. 120' plus, I kid you not.

Did some real simple mods to it. Basically did this, but taken up a small notch. It shoots pretty well, around 90, respectable for the mods done. Just did this as a time killer while epoxy was drying on the next one...

I wanted a modded gun that could compete with current, top homemades (Pump action, hoppered, durable, etc.) The thing shoots respectably far (around 110'), and is real comfy, so I'd say I accomplished the goal rather well. The raider stock is detachable, the internal mods are up to par with Zorn's and the re-enforcements in this thing would make Makeitgo proud. So ya.

Do you think she'll sleep with a panic switch?
Back to Modifications · Next Unread Topic →