Mod party, yay! Or in the eyes of some people, dick-waving time.

One of Zorn's contracts. 3B, homemade internals.

Honestly, I'm never over-modding a NF again. Its too much of a hassle lol.
Mods Done:And here is the ToomuchworkputintothisNITEFINDER:

Hits insane ranges. I love it.

Here is another vulcan chain mod and different pj. Same as my others, just different paint. Starwars the clone wars build your own blaster, blaster
Made by hasbro, $45 at kmart, but buy 2 get 1 free, so like $30 each
Doesn't shoot stock, but I stuck a 2k in it

Old Style Supermaxx 1500. 12inch PETG Barrels, plugged pump. 100+ ranges with 4 pumps. This one was recently traded to Dragon216, but I have 2 more awaiting barrel spacers.

Nitefinder replacement plunger tube. Made out of 1' PETG along with a CPVC coupler hammered into a PVC coupler. I use a 12 inch PETG Barrel, nested in PVC, with this gun, and I am very happy with it. Currently out of the shell for some touch-up work on the internals.

Also, can someone please help me re-size my pictures? Thanks all.

I plan to put a RSCB on the pistol splat and breech the BBB.

Soon to be listed on ebay:

Well, here are a few of my guns. All of them modded by myself

5th. Razorbeast: CPVC turret built off of the rotation mechanism which would advance the chains. I recieved this without chains and had to do something to it. I may consider inline clipping the barrels for use with Nanos. Each barrel seals perfectly with the help of some craft foam on the end of the plunger tube.

The rear loading port doesn't work well with the foam I am using.

Canadians, you know what you need to do.

My minimized, extended draw nite finder that needs to be painted. Sometime, somehow.

NOTE: I do realize there is a bit of "orange Peal" where the clear-coat had a reaction with the topcoat......I am wet sanding and re-clearing those area's. 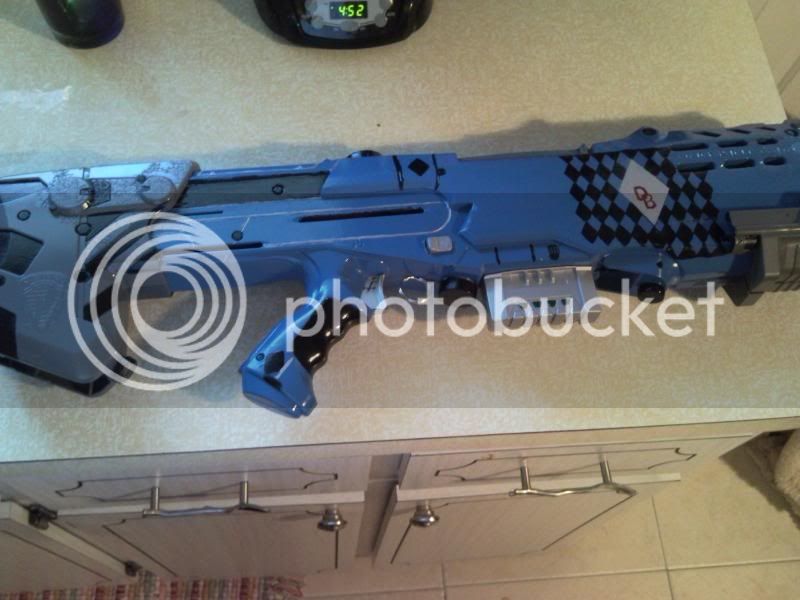 Here are my most recent...

Still no internal pics on the Shell Shock, will post those when I can. I may have LS pics up later tonight.

Still need to glue together the stock. Trying to make a Semi-Auto AT2k, a nephew removed 3 times from the Unfair gun.

I know it looks black, but it's blue. My webcam isn't the greatest.

Got an SGSL from Bags at Christmastravaganza. War modded it with a crooked bushing and no barrels short enough to work with it, and the ball pump I had with me I didn't even feel like putting on.

Fixed it today. I can put four pumps into it, very tops, but three is definitely sufficient for this speedloader. It was exploding darts at four.

There is absolutely zero dead space between the dump valve and the beginning of the barrel. A'ight, maybe a millimeter or two, but it's basically negligible. I also removed the weird stock restrictor chunks that sit in the very small barrel stub.

Some of my current WIP'S:

I got this sneakshot from Blue at BAFF 2. He had already couplered the PT and installed a pump. I went ahead and PETG'd the PT and rigged a couplered 2k tank up to the pump. Sorry, no pics of the sneakshot's PT/Internals. Still need to integrate the tank into the front grip.

More pictures in the VIDEO

I don't nerf, so pleaze people, stop messaging me telling me to stop painting my guns realistically. I don't run around in public with these things, they only act as wall decoration and for the occasional nerf free for all gunfight among my roleplaying group.

In fact it was specifically to keep their hands off my more expensive pieces that I decided 8 months ago to give each member of my gaming group (we play cyberpunk 2020 most of the time) their own nerf guns. So I tracked down several nerf eliminators (bought a couple from posters here on the boards), and custom painted them for each player, then let them draw lots to see who got first pick. Only one has the air restrictor removed, which is to be used by the gm.

I did these about 6 months ago, since then they have seen a LOT of use as sometimes entire gaming sessions have degenerated into things the players who aren't actually taking their turn for the round seeing who they can hit in the head by rebounding their shot off the 15 foot ceiling. Unfortunately this means the paint has begun rubbing off on a few of them, or has been chipped from rough use. But they still look pretty good. My favorites are the Silver and gold pair. I don't have picks, but the areas under the slides have been detailed as well.

There was a blue and flourescent green one as well, but the player who got that one took it home with him, so no picks. I painted it in those colors because they are not only the color scheme of my Cyberpunk 2020 website, but also because it looked cool under the blacklight.

Beast of a Titan. Soon to be powered by a (slightly) hacked, compact air converter. You'll see what I mean soon enough.
The plan is, the Air converter will be on a quick release circut, which will be glued to the blaster when it's finished, so I simply press the button and hold for about a second (did tests on it earlier), then shake it down to load a dart and fire somewhere around 180'. Thats my goal anyway. The Compressor is small enough for it and a 12 volt acline solid state battery to fit in a small back pack of mine.

Titan itself is all done, kept the gauge on it to check the air pressure in the tank (even though it is a crappy gauge, it's better then nothing). Will be touched up and painted. The whole project is maybe 45% done.