I thought I'd share my latest creation with you.
The Worlds First Touchscreen Controlled Nerf Gun!
Well it may not be the first, but I haven't seen another one!
It has a Raspberry Pi Zero controlled touchscreen interface, which in turn controls an Arduino Nano in the shell. The RPI is housed in an old project box, and communicates over USB to the Nano.
It has got buttons for the tac light built into an old Nerf red dot, a red dot laser housed in the end of the barrel, blue LED strobes in the barrel and a dash cam night vision camera mounted on an old iron sight.
The screen also allows me to very the motor speed, displays a shot counter (with automatic reset on reload), motor temp gauge and battery level gauge.
It is powered by a 11V 3S lipo housed in the adapted stock, with a 3A BEC to power the electronics and if I wish, chuck full voltage to the motors.
All the wiring is renewed, but the internals are stock.
Now I know throwing 11V at stock motors isn't good for longevity, but it has a timer that drops the voltage after 5 seconds, and the price of a new Stryfe for parts is cheap enough not to worry about it. I may get round to upgrading the motors when these ones die.
I didn't build this for maximum FPS or range, it was built mainly to see what I could possibly fit in a Stryfe, and to teach myself how to code the Arduino, learn Python for the RasPi and how to use QT and C++ to get the touchscreen to work. Its going to be my sons gun, so it will get battered (oh and have an orange barrel end). So yes, a lot of the mods are pointless, but its a learning curve.
Originally I built this gun with the LEDS and NV Cam and it was controlled by an old mobile phone for which I wrote an app that controlled the arduino via bluetooth. When it died and totally rebuilt it into this.
Here is a link to the youtube video that shows it off a bit better than the photos.
https://youtu.be/y02Iqiv8RFY
Short video of the first prototype screen operation
https://youtu.be/5fsOIwU0sl4
Anyway, let me know what you think! Its still needs the barrel finishing and a few tweaks. 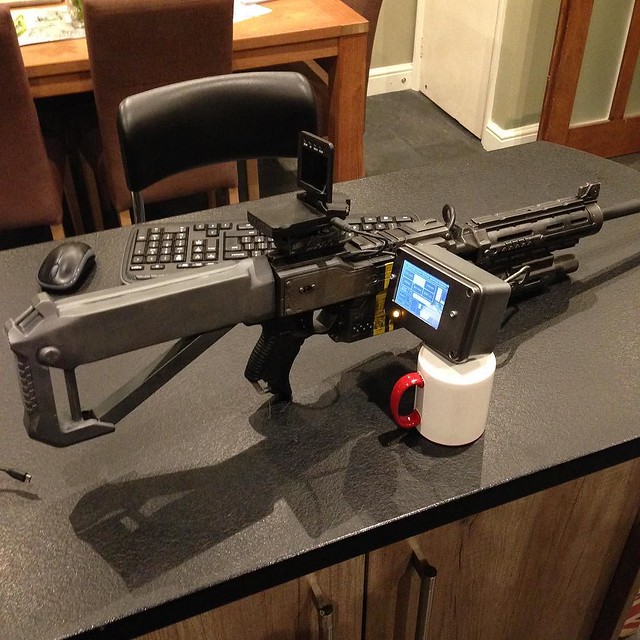 Dear god ... that thing looks beastly. One question though. How is the RasPI box supported? Internal supports? The whole setup looks a might heavy for non reinforced plastic. I only ask since you didn't mention that in the post and I can't see any supports on the top. Although, if it's for your son (and given that it looks like something out of like Halo or Borderlands) a couple of superfluous strap supports going around the box and the shell would look pretty cool. Especially if done like the grip wrapping on the Sledgefire.

There is a bracket on the box that is bolted to the Stryfe and washered behind the FW cage. It won't fall off. The box only has a RPI and the screen in it. So weighs only a few grams. I was looking at housing the battery in there but it would of put it way off balance.

All the real weight from the LIPO is in the stock. Its surprisingly well balanced now.

What is that stock made out of? I see a recon butt plate, but thats all I recognize.

Co-Owner of the History of Nerf Modding research project, moderator of r/Nerf, owner of BlasterWiki, maker of 3d printed blasters and Nerfy art.

It is a dashcam. Quick and simple. This one has IR LEDS for a bit of night vision. The range is crap, but it serves a purpose. When the touchscreen button is pressed it powers up the cam and starts recording. The only problem is it records upside down! I would have to try and turn the camera module 180 degrees and resolder to the main board and then do the same with the screen, but the tiny ribbon cables make this impossible.

I want to use a good IR flashlight and a PI Noir camera next  integrated on the touchscreen housing. If there is WIFI it would be able to stream the video.

Also if I add a GSM/GPS module to the RPI it could send what ever data I wanted, such as location, and display it on a interactive map. But thats a way off yet!

The stock is a Recon stock but with the center section removed and plasticard used to create the box for the LIPO. The brace is just a piece of scrap timber epoxied in place and then bondo-ed to smooth it off. I want to give the stock more detailing as it does look just like a box at the moment.

Aww. A lot of video editing programs allow you to flip around the orientation of the vid. But still.