Usually, when I record a modification, it was successful. This time, though, it failed for me. For science's sake, I have included this experiment.

I don't have photos for each step because I usually go backwards after I finish, and only take progress shots when I think about it.

Question: Can the Sharpfire handle a CPVC breech?

The Sharpfire, in my opinion, is the coolest looking blaster from the N-Strike line. An argument can be made for the Micro-caliber Tech Target Eliminator, but I feel it's from a different line, the Nerf 2003 line. 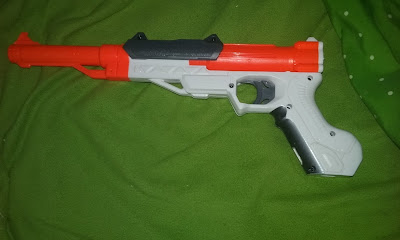 Look at it. Its faux barrel looks perfect for sticking a working barrel into!
So, let's pop this bad boy open!
First, we need to remove the slide. Now, we need to choose whether we're going to remove the locks or just get rid of the air restrictor and upgrade the spring. For this project, we will need to open the blaster up completely. 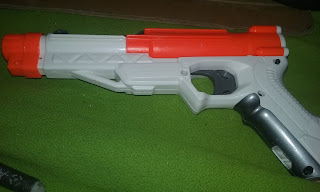 The orange barrel attachment point at the front comes off with one screw, and the stock mounting plate at the rear has two screws.

Now, we can pull them off and unscrew the body. 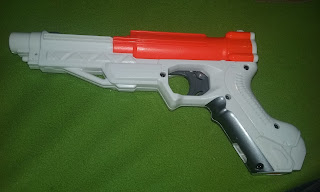 Open the blaster up and get rid of everything not shown in this picture. 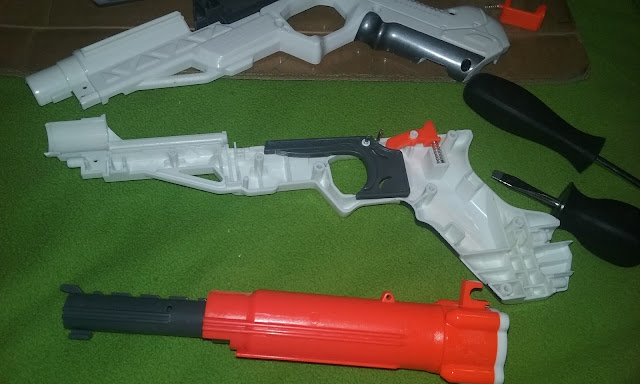 The plunger tube and breech come out in one piece and are only secured with a pin and a screw port. Talk about simple internals!

Now, unscrew the spring rest from the plunger tube and slide the grey piece back. This will dump out the free-floating plunger head and the spring. Set these aside and start boring a hole through the breech. We're going to want it at least wide enough to fit your drinking straw through.

When you've crammed your straw through the hole, fill the dead space with your hot glue, so it looks like this. 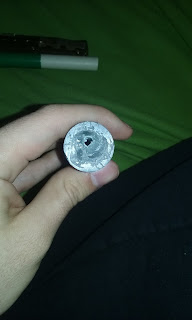 For the front, try and get a rounded mound of hot glue. That's what we'll use to seal the breech. Fugly? Yes. Practical? Yes.

Now, wrap duct tape around your section of pipe and cram it into the faux barrel.

Throw everything back together, and you're done!

Test firing resulted in my dart not budging.

Error analysis: My CPVC is too tight on my darts. When I loaded a 1.25" blank of Home Depot grey Foam Backer Rod and a dart made from said FBR, they fired nicely. Since I'll be using stock darts, this mod is of little-to-no value to me. However, some of you should find it valuable.

I know how to help you because I have broken every rule in the book.