Jediael here again. I have been steadily working on additional features for my main mod the Air Tank Magstrike and wanted to share a new tactical component I have been testing out: Magnetic Mounting.

Why don't I just show you first really quick in a video what I'm referring to.

Pretty straightforward but extremely useful for carrying a backup weapon out of the way but still accessible at a moments notice.

I originally did this with a 18 round clip when I was running a stampede/magstrike tactical integration, which you can see here. In that version, I used 2 sets of 3 neodynimum magnets rated at 6 pound pull strength. 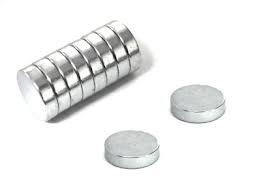 The strength was enough to hold them securely in place yet I could still grab it with no effort at a moments notice like the magstrike in the video above.

You can buy a pack 10 of them for $8 here on amazon if you wish to replicate it somehow.

For my humans vs zombies loadout, it has been extremely useful to use dual magstrikes during missions. My main one is the modded air tank feed one that only needs reloading. I conserve the main tank for times when we are being overrun with only brief chances to reload. When things are slower, I use the unmodded manual gun to conserve my main air supply for my primary. However, it got very tiring to constantly carry both guns after more than 30 minutes so I wanted a way to carry it securely and out of the way.

I decided it would try replicating the magnetic mounting system for the gun, but knew it would require greater strength to handle the forces. I did some running testings with the clip version and found the forces were strong enough to withstand running, tossing and jerking. I calculated the ratio of magnetic power to the weight of the clip and then multiplied that by the weight of the gun to ballpark how much strength I would need.

Now obviously a clip with foam darts is significantly less weight and force exerted by gravity when running, bouncing, jerking around, etc. I decided to be safe I would roughly double the force to account for the greater pulling force of the 2 pound gun when moving around.

I purchased a set of 4 of these 37 pound strength countersunk magnets on ebay for $15.

I used steel putty to permanently affix steel plates to four positions of the magstrike without blocking holes (so I could still open the gun if I wish). Because of the force of these magnets, I knew epoxy and bolts would be better so the only 'breaking' points would be between the magnets and the steel plate. I used extra putty to put round edged on all sides of the plates in the extremely small chance someone got caught on an edge had I not made them smooth.

I then mounted the magnets to the frame of my carrier to match these locations. As you can see, it works beautifully and I cant wait to put it in action. I like it. It seems a bit over the top in terms of Tacti-cool. But, I still like it. Have you made other variants... Such as leg straps with a plate on it for the blasters? Could you potentially get the metal inside the blasters to not take away from the paint jobs or anything? And How sturdy is this set up full on sprint, jump, parkour style avoid zombies gametypes?

(I think that's all my questions.)

1. Have you made other variants... Such as leg straps with a plate on it for the blasters?

I have gone thru several iterations and have found having my waist down completely free is the best way to go, at least with this setup. Since I have many things anchored to my torso, if I keep everything in that one spot, I feel less encumbered overall. From experience I've found the best thing is to minimize how much of your body is covered with gear and consolidate it to a few areas. I may look at doing a leg harness for like a recon setup but I haven't gotten to it yet.

2. Could you potentially get the metal inside the blasters to not take away from the paint jobs or anything?

This is one option but the tricky part is that the more material you have between the magnet and its mounting point, the more you reduce the strength of the pulling force. Even just a 1/8th of an inch of foam, plastic or any other material makes a noticeable difference in strength. I needed the full strength of the magnets so that is why I did the metal externally.

3. And How sturdy is this set up full on sprint, jump, parkour style avoid zombies gametypes?

This 3rd version is extremely sturdy. Everything you see is either bolted, screwed, braced or magnetized. Nothing moves until I detach it. This allows me to run full speed with all the gear since it weighs down on my waist and my legs are completely uninhibited. I cannot do quite as many maneuvers as if i were only holding a simple gun, but I can move quite freely. I still maintain almost 100% range of motion, which I checked every time I made a change. I can squat, run, jump and pretty much do anything I would otherwise be able to do. The only encumbering part of it is the weight itself, which isn't too bad since I'm using a frame that is curved to my back and made to properly transfer weight to my torso.

Yes, I certainly can. It was precisely for that reason I doubled my estimated strength requirement because I knew the forces of a 2 pound gun with a mag bouncing around would be significantly greater than on an 8 ounce magazine. I have jumped up and down harshly with the pack and gun on, swung myself left to right hard and numerous other maneuvers you might expect to take during an HvZ or nerf war and the gun didn't budge one bit. I'm pretty stoked to give it into some real action. Planning to capture some video if it so you can all see.