[introduction that no one reads] 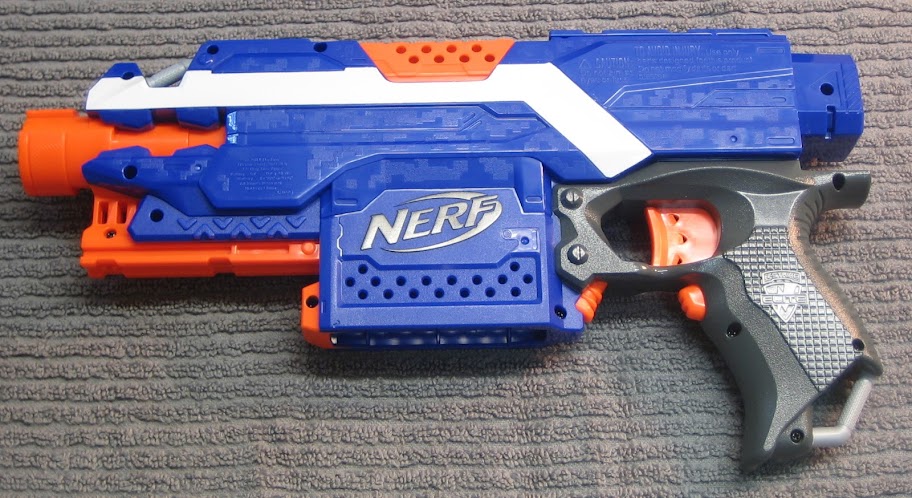 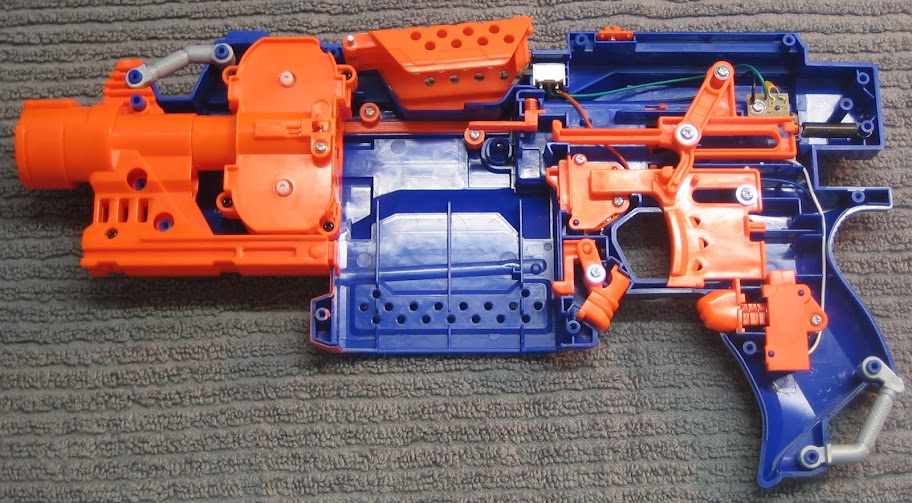 This first lock prevents you from pulling the trigger if you are not activating the motor switch. You can simply remove the shown piece to disable this lock. 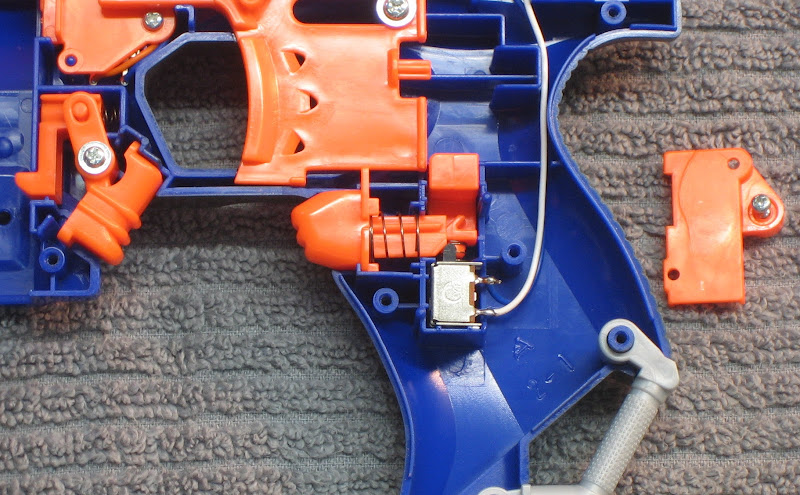 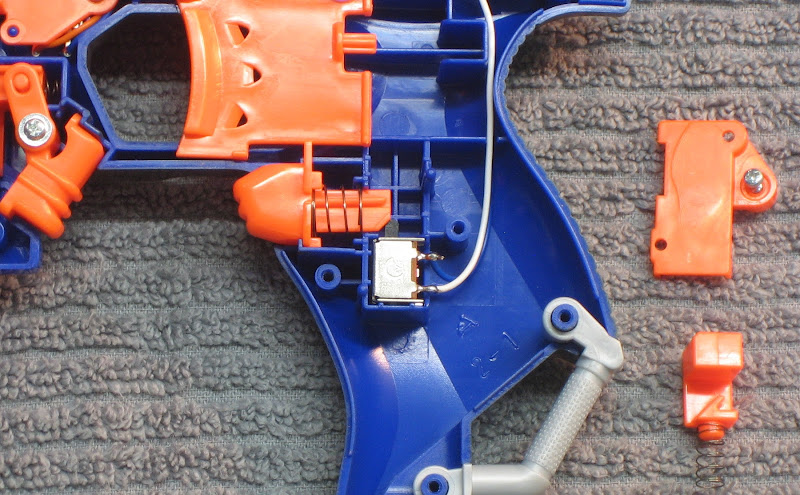 The next lock prevents you from pulling the trigger if a magazine is not inserted. This one also requires simply pulling it out to deactivate it. 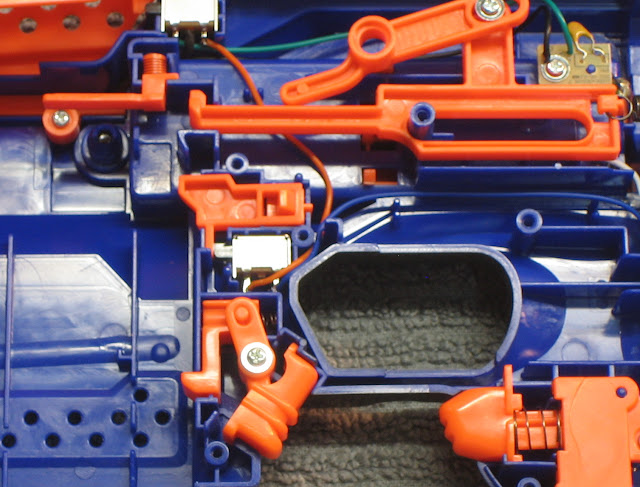 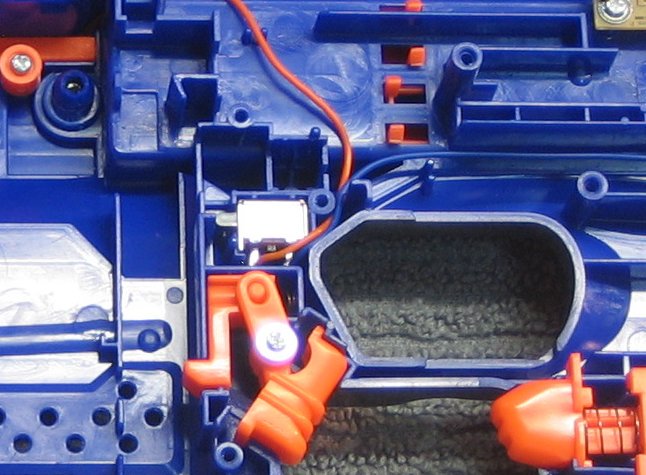 This lock prevents you from pulling the trigger if a dart is not loaded in the magazine. You can remove this one very easily, just like all the other locks. 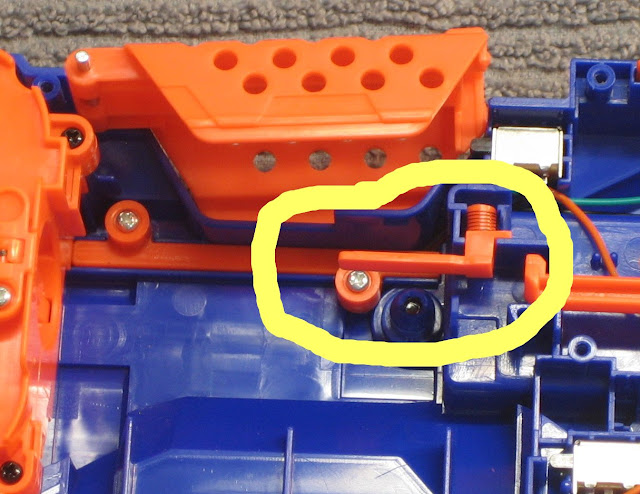 Photo of all the locks removed. 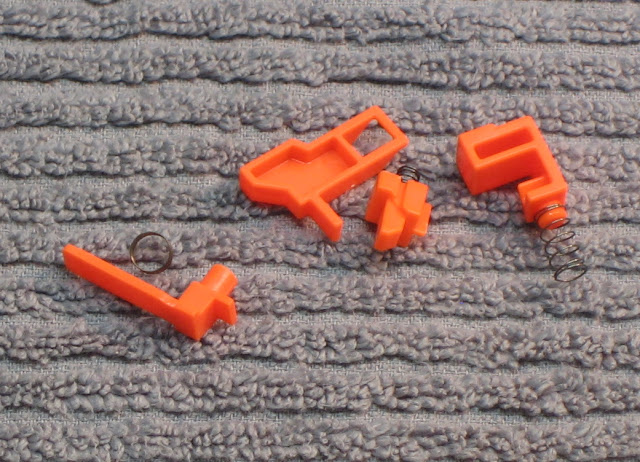 Clearing the electrical circuit will disable the magazine switch and access door switch. Also, the plate in the back will prevent you from using four UltraFires at once, so removing it will allow you to utilize a higher voltage. 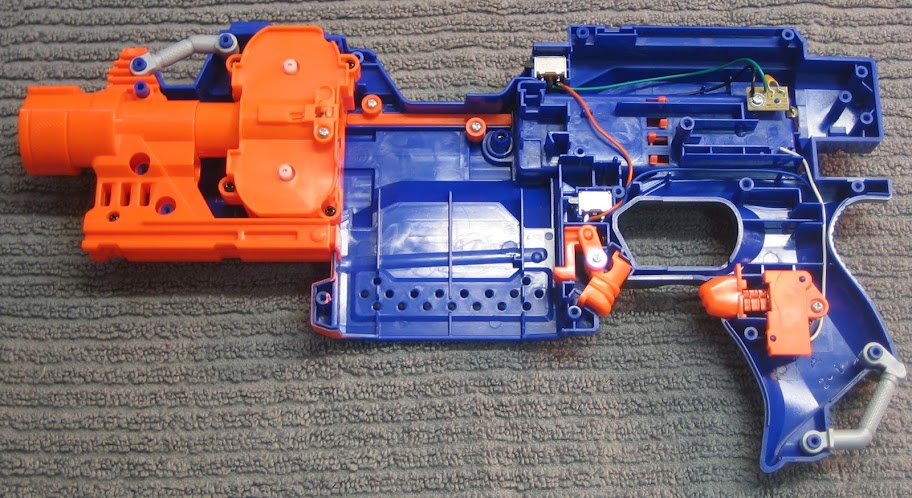 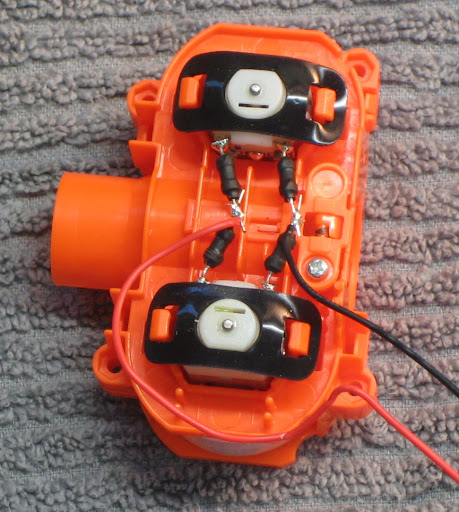 I replaced the motors with two motors I found in a local hobby shop. They were made for RC helicopters and are quite powerful. They are a bit longer than the stock motors, so shell modification was necessary for them to work.

Motor specs: The motors are made by Blade. If you type 'EFLH1210B' into Google you can find the motors online. I paid $10.99 USD each because I had to size them up in person and the shop I go to has slightly higher prices. I bought a 'right' and 'left' version which have their positive and negative changed so they rotate in opposite directions. 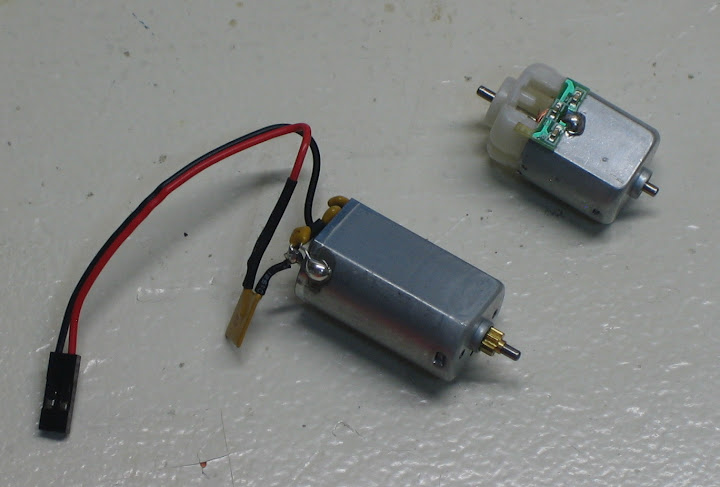 I didn’t reinstall the resistors to the motors. 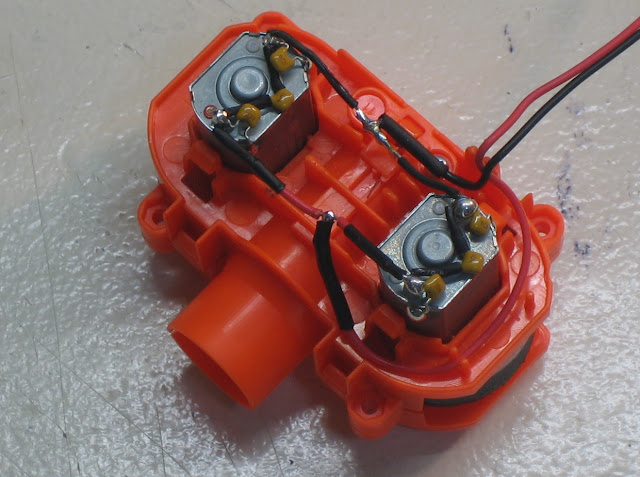 I experimented with using RC wheels as replacement flywheels, but I was getting nasty residue from the wheels because of the RPM. I may try different wheels later, but for now I’m sticking with the default flywheels. 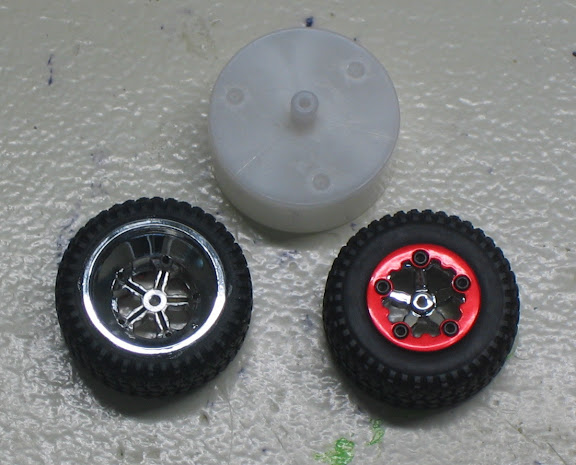 However, I did apply a layer of Plasti-dip to the wheels for increased traction. The stock flywheels were pretty slick so I figure this will help grip the darts. 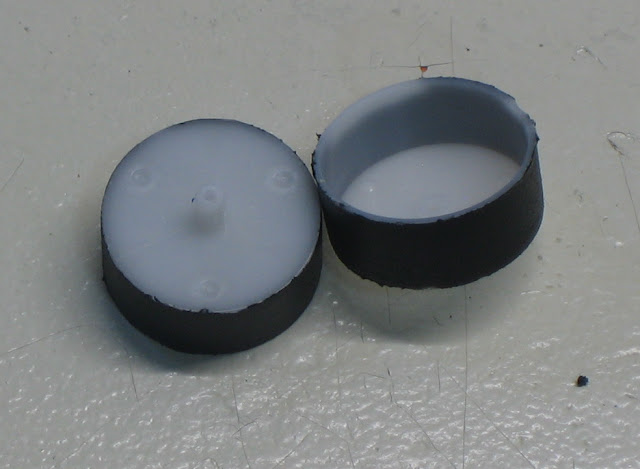 Modifications completed and all pieces reinstalled. 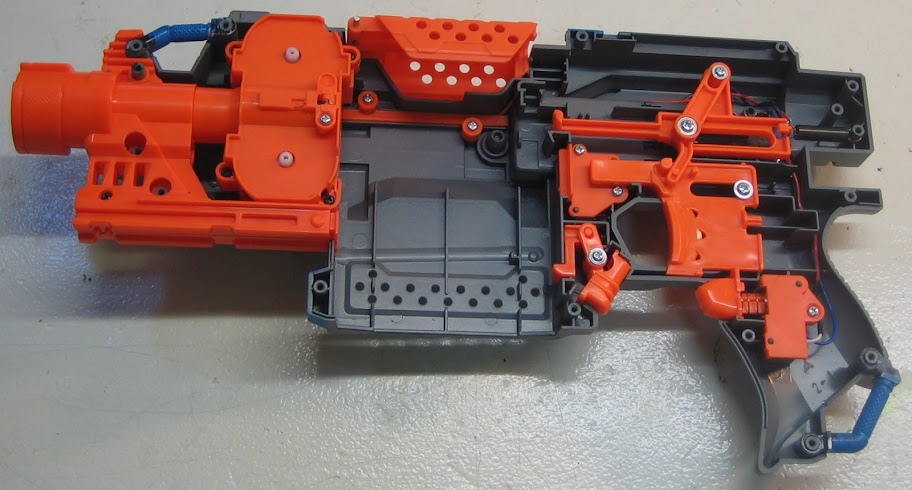 I glued two paint caps over the holes I had to cut for the motors to fit in the shell. It doesn’t look super clean, but I had to cover the exposed motor pieces. 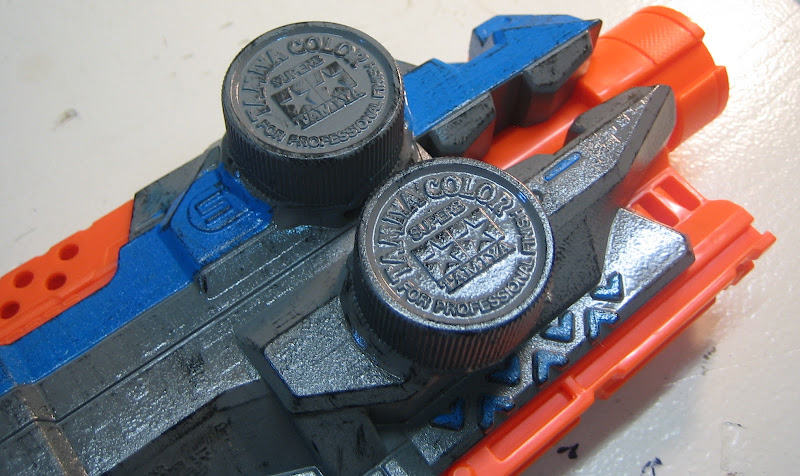 Finished blaster. Not terribly relevant to this over view, but the paint job details are: Grey vinyl dye base coat by Duplicolor, ‘Enchanted Blue’ accents by Citadel, and ‘Chaos Black’ dry brushing by Citadel. I finished the paint with a gloss clear coat by Krylon.

The gloss coat makes photographing this blaster difficult. When there is enough light for the camera to get a good shot, there is mad reflection.

The motor swap does not affect range all that much. While the RPM does seem to be a bit higher on the same voltage, the biggest advantage is being able to run on a higher voltage safely. With the stock motors, running four UltraFires will cause them to burn out over time. I’ve revved the motors for a pretty long time and put quite a few rounds through the blaster with the new motors and have not smelled or noticed anything with the new motors. You should not expect massive RPM gains from motors like these, the increased durability is the reason to do it.

I was disappointed with the introduction coop, it lacked a certain finesse.

Just wondering about what make and model the motors that you used as replacements were, mine gets here Tuesday or Wednesday so i can't wait to start working on it. Can't wait to hear the ranges you get on this thing.

Also it looks small enough to replace a LS front gun, that would be funny.

~RANGER DAVE Grenadier for Dragon Army
"Where do I put my but?"

This is the best Barricade clip mod that I have ever seen! Do you have any specs on the replacement motors?

This is great, very clean, I like the motor replacement.
What hobby store did you get the motors from?

Great job on the motor swap. I did just a switch removal and rewire on my stryfe . I was very dissapointed on 16.8v with elite darts fishtailing like crazy.

Whats with the paint?? Doesn't look like it was applied well.. (No offence)

1)Just wondering about what make and model the motors that you used as replacements were...
2)Also it looks small enough to replace a LS front gun, that would be funny.

1) The motors are made by Blade. If you type 'EFLH1210B' into Google you can find the motors online. Although I paid $10.99 USD each because I had to size them up in person and the shop I go to has slightly higher prices. I also bought a 'right' and 'left' version which have their positive and negative changed so they rotate different directions.
2) Definitely small enough because it's similar to a Recon. I don't think I'd put a magazine fed blaster on the front of a Longshot though, but that's just my opinion.

What hobby store did you get the motors from?

Hurricane Hobbies in Columbus, OH. I don't think it's a chain and they don't sell from their site.

Whats with the paint?? Doesn't look like it was applied well.. (No offence)

This lighting makes the clear coat look nasty, it looks much better in person. But since this post is not about the paint, I'm not re-shooting them.

When searching 'EFLH1210B' to buy the motor, I only found a left version. Also, when I searched 'EFLH1210B right', I still only found left. Any suggestions?

When searching 'EFLH1210B' to buy the motor, I only found a left version. Also, when I searched 'EFLH1210B right', I still only found left. Any suggestions?

That number is only for the left version. I don't have the packaging for the right motor anymore, but it's the same make and model so you can search by that rather than that number.

You could also buy two left motors and just switch the wiring on one.

The right version of the motor is: EFLH1211B, for anyone who is concerned.

First, this is the best write-up for the Stryfe I've yet seen. Nice job, and I also commend your ambitious motor replacement. I'd like to provide some info on the motors that I haven't seen posted anywhere else yet.

I suspect what you gained is more torque at the expense of battery life. (No free lunch) The motors you used are too long because they are the "180" size and the originals are "130" size. There is a robust selection of 130 size motors available with a wide range of performance specs. I think its possible to get even better performance then your 180s without having to cut up the plastic frame.

I've ordered a handful of pairs of 130 motors with the intention of finding the best drop-in upgrade option. The OE motors spin pretty fast just on Eneloop AAs. I measured the dart velocity with a shooting chrony (about 60-75fps) which translates to ≈430rpm which means the wheels are slipping on the darts or the RPMs drop a lot as soon as a dart makes contact (not enough torque), or both. The best motor will improve both speed and torque. I'll report back in a couple weeks about which of the motors I bought produces the best muzzle velocity.

Having said all that, I do believe it possible when using higher voltage and more powerful motors to make these nerf guns unsafe to be shot with. My inner demons have me contemplating flechettes and sabots but that's the last I'll speak of such things here.

After a while crocodile.

My first order of motors came in the mail today. The good news is that I'm already duplicating Coop's performance with the 180s on a set of the shorter 130s. There's a little more good news but I'll keep that to myself for now. Think I'm gonna do a video of my results and show it all there.

I can say that I was totally wrong about the OE motor's performance specs. Its no slouch at all and there may only be one or two stronger motors available in that size unless you want to start talking about external battery packs. The bad news is that of all the test motors I ordered only one (pair) was worth installing for a trial. The rest didn't even come close.

I'm gonna order another bunch of motors taking into consideration what I've learned so far just to see if I can do even better.

On a side note, there's probably some small amount of performance to be gained from balancing the flywheels. One of my Stryfes sounds ok, the other sounds out of balance (noisy). I have the tool for the job but its not simple so that's a project for another day.

After a while crocodile.

Could I do this to a rayven without cutting into the exterior shell? Or could I even reduce the length of where the fly wheel and the motor stem meet? Oh and eBay is your best bet to purchase the motors; I got them both for roughly 10 dollars and they came brand new.

I have tried these motors, and solarbotics rm2's, and am a million times happier with these. Ive ran them both off of the same type of 12 volt 1.2 amp hour battery and these have an incredibly higher rpm and amount of torque with the exact same level of charge (verified with
a volt meter).

I'm a relatively new Nerfer at this point, but as I was modifying my Stryfes I couldn't help but wonder what the 2 small flaps in the flywheel assembly are for. I don't have any pictures but i'm fairly certain everyone will know what i'm talking about (sry no pics, don't have a photobucket or anything).

I imagine they *might* have some use in left-right stabilization and centering of darts as they get pushed into the flywheels, but I think they also give resistance to the trigger pull, and they could actually decrease accuracy if one of the flaps is in contact with the tail of the dart for a bit longer than the other. That would kinda nudge the dart and angle it to one side.

I did say "Stryfes" as in plural. I went ahead and took out the flaps in one of my blasters and left them in in the other. I'm still on break right now, but as soon as I head back to school i'll be able to take out all the electrical locks and re-do the wiring, and then find a nice open space where I can test out the spread of the 2 blasters. In the mean time, I was just wondering if anybody had actually taken these flaps out before or knew if they were actually beneficial.

Here's a guide I wrote.

The flaps are exactly what you think they are, they center the darts.

I have seen no adverse performance after removing them. You're thinking about this too much.

This is an old guide and motor tech has advanced substantially. I recommend you hit up outofdarts.com and get motors there if you don't already have the blades.

If you do, flip the wiring on one around. Should spin it in reverse.