A good buddy of mine went to the airforce last January. He called me up one night and told me that they were starting a nerf league at their base. Astonished, I offered to build a blaster and put a nice touch on it. This Stampede is fully tricked out with the internals package, 12v battery, and a CHAINSAW. How cool is that? Now, you may be calling that a Lancer from Gears of War, something that I am not. I didn't set out to create one, but I saw a new toy come to market and wanted to see how it would preform with a nerf blaster. The True Heroes Lights and Sound Blaster is a TRU exclusive and I decided that any zombie slaying airman would need one integrated into his awesome stampede. I added a master power switch on the right side of the chainsaw to prevent the chainsaw from accidently starting up while on the hunt. One flick of the switch and it's cuttin time. A dual color metallic black and tan paint job finishes off the blaster in a sweet look.

Not really going to do a write up, partially because it is done, partially anybody can take the two shells, add a saw, and with a few screws and plumbing brackets, can make the two blasters come together. Mods on the Stampede is the standard spring replacement, AR, and safety removals.

There are more photos on the Lasagna678 blog page. 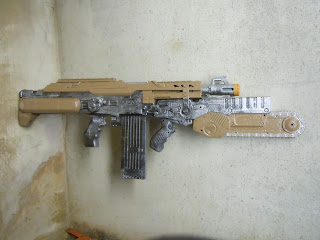 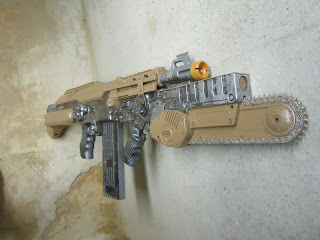 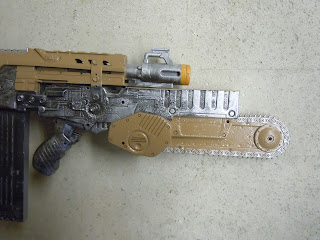 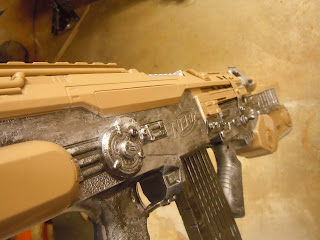 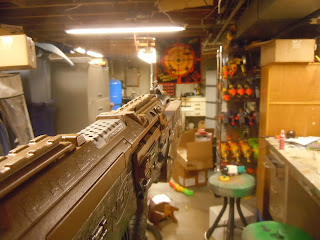 It is a lancer.

forsaken angel would be proud.

Great integration and all, but doesn't this belong in the mods and PJ thread?

Great integration and all, but doesn't this belong in the mods and PJ thread?

That is correct, but we don't need you to say that.