At Cataclysm on Saturday, Langley told me about a concept he had for a blaster: a slamfire-only SNAP, where the trigger was tripped at the very end of the priming stroke. We talked about issues with the design, and I wondered about using an extension spring with it, like the Revolution. This blaster is the result of that conversation. Thanks, Langley!

Note: this is a proof of concept, with refinements to come later. So, let's get this turkey roasting, shall we? 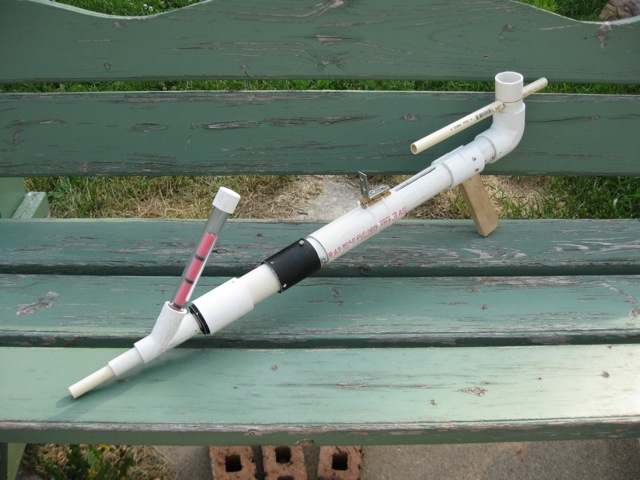 A glamour shot of what may be the least glamourous SNAP ever.


Functionally, it's very similar to the SNAP/Revolution, but has a few differences as far as operation. Here's a side-on view: 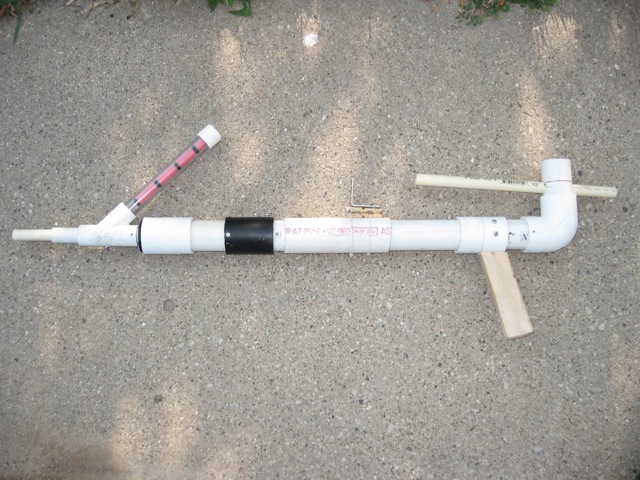 And now a version with 87% more exploded view: 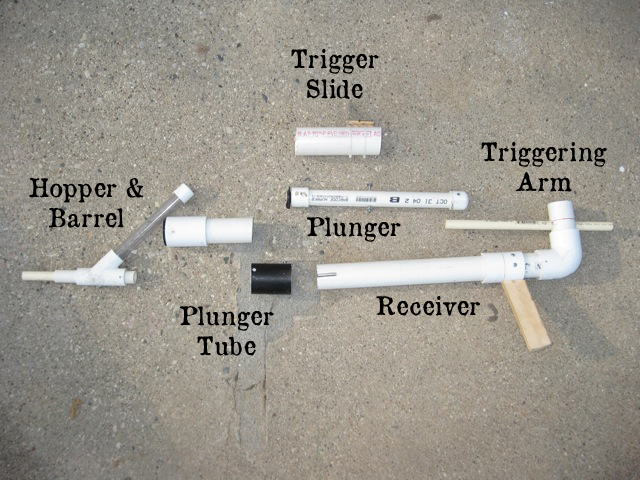 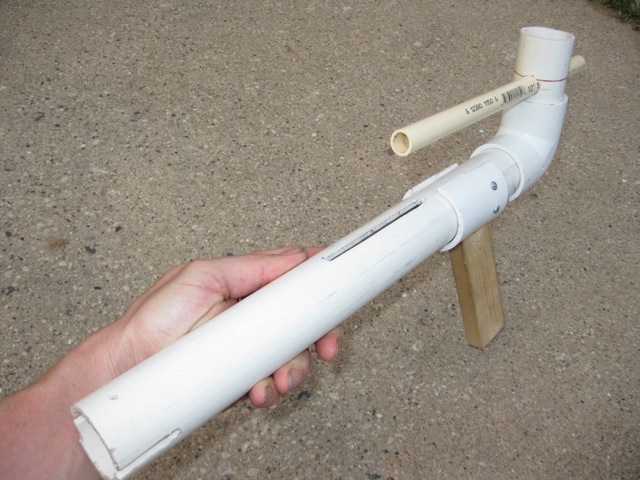 You can see the slot in the top where the firing pin slides. The slots in the front are for the forward spring stop in the plunger. These slots are in the plunger tube on the SNAP/Revolution. The triggering arm is what actuates the trigger on the trigger slide. It's ugly, but functional (I built it using the first three scraps I could find (the arm is 1/2" CPVC, shoved through a hole in a chunk of 1.25" PVC, in a 1.25" elbow). 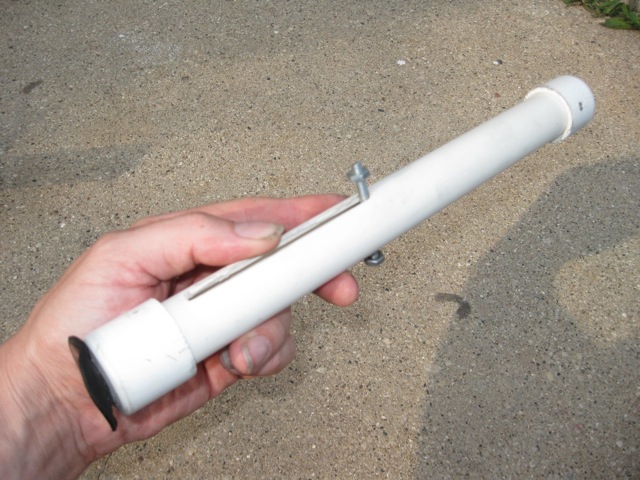 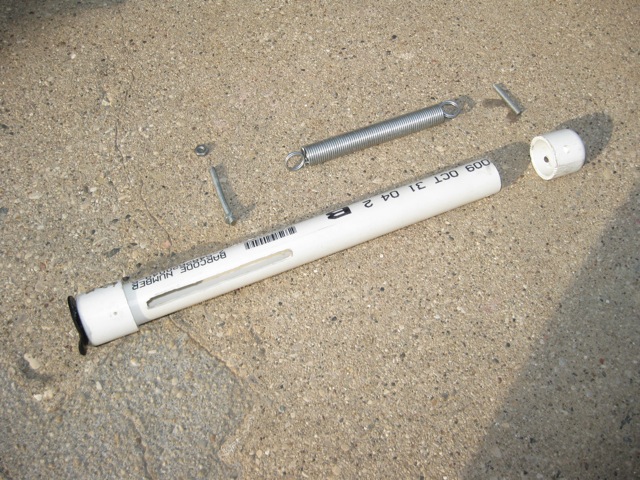 The plunger assembly then just drops into the receiver. 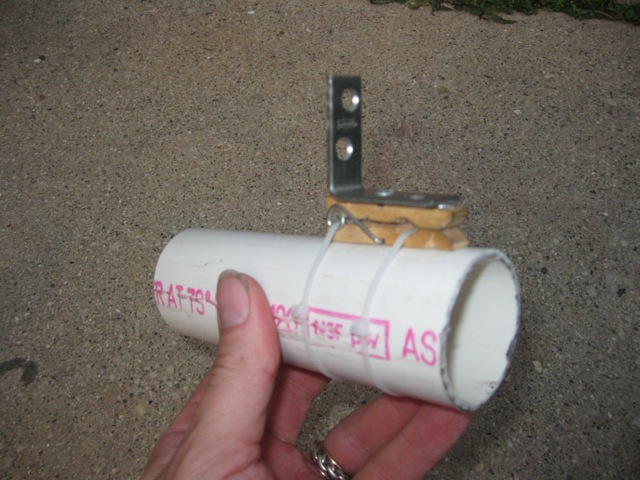 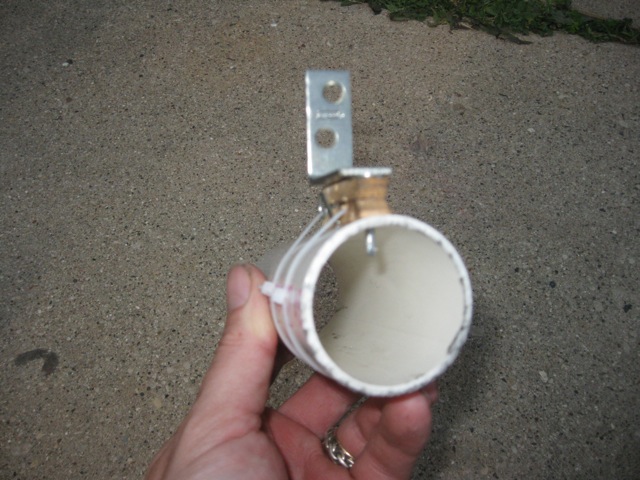 The charging slide is made of 1.5" thinwall, which slides perfectly over 1.25" PVC (thanks to SomethingNerfey for hooking me up!). I was a little surprised that it has enough wall thickness to support a CPT directly, but hey. I'm not going ot argue with success. It's a typical clothespin trigger. The nail rides in the slot on the receiver. Push it forward, and the CPT will engage the rear of the plunger tube. Pull the charging slide back, and the plunger goes along for the ride. When it meets the triggering arm: 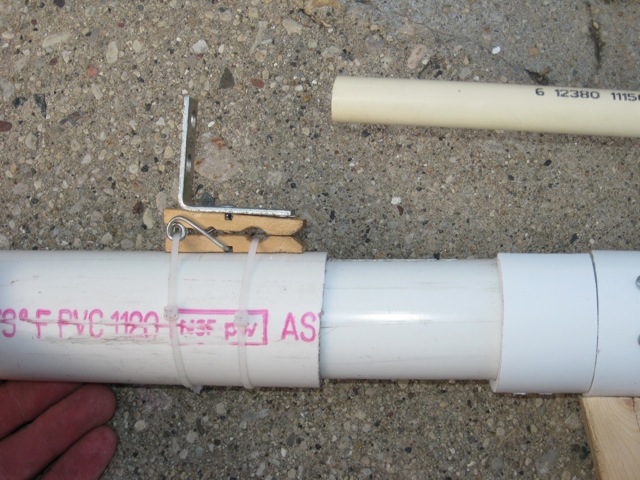 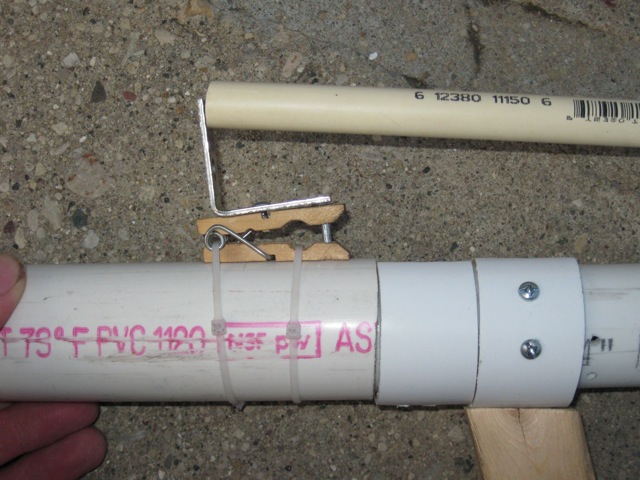 The extra bit in front of the handle clip is there as a travel stop, so the slide can't over-extend and pop out the nail. Future versions could just have a longer charging slide. 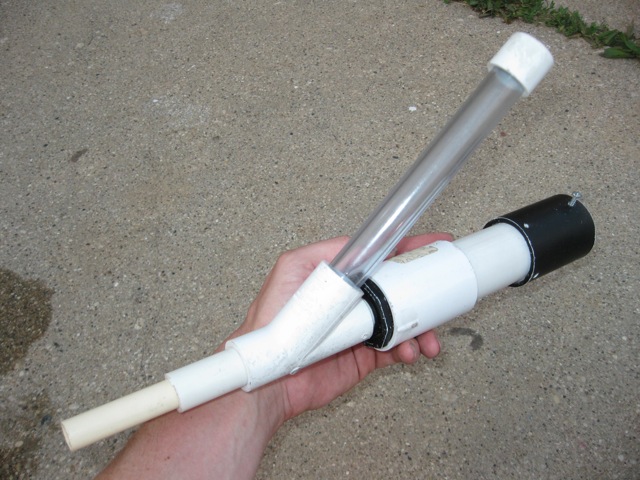 Not much to be said here. The plunger tube currently attaches with a screw, but could also use the SNAP/Rev tool-less plunger tube clip method.

Q: So, what kind of range does it get?
A: For a proof of concept, Far Enough. I didn't take any accurate measurements, and it's hard to fire a slamfire flat. Estimating, I was spamming darts about 60 feet.

Q: How fast does it fire?
A: I can empty the five shot hopper in under three seconds, arrived at by a highly scientific method of counting "one-one thousand, two-one thousand"...

Q: How strong is that spring?
A: Not exactly sure. The spring in the SNAP/Rev is about 14 pounds, and this one is far weaker. I'd guess...8 pounds?

Q: Isn't a five shot hopper sorta useless for a slamfire gun?
A: This is a proof of concept. Future builds will use a larger spring, will be able to use a larger hopper, and will probably get better range.

Q: That triggering arm doesn't look very stable.
A: The current shape was built for easy adjustments and tuning. Even so, I put a few hundred darts through it this afternoon, and it never shifted on me.

Q: That thing's really ugly, like it got hit in the head with a really ugly thing.
A: She may not look like much, but she's got it where it counts, kid.

I'm building a SNAP Revolution for sure because I liked yours so much at Cataclysm 3, and possibly now this. I hope the thinwall PVC you used in this is the same stuff I gave to you!

I hope the thinwall PVC you used in this is the same stuff I gave to you!

Thanks for mentioning that...I wanted to credit you, but my heat/age-addled brain forgot your name by the end of the day (I remembered Langley's name because he had it on the back of his shirt). Thanks much, I was able to put it to good use pretty quickly.

This is actually really cool. I like the simplicity of the slam fire mechanism. Nice work!

Have the slide have some forward travel beyond the pump stroke (in other words, have the connection to the priming rod be a slot, not a hole). Tie a string to the slide that pulls the trigger when it travels into that 'extra'. Done.

Back to the OP's mod, I like it very much. It definitely got hit with an ugly stick, and I love it all the more for that reason. I appreciate how it up-ends many of our standard design preconceptions with the sliding catch tube, and the elegance (and fugliness) of the triggering system.

Jeezus. That idea has been itching at the back of my brain for months now, but I haven't gotten around to trying it. Then I talk to you about it on Saturday and you've got a prototype built before I can get back to Jersey from Chicago. Well done. I'm glad you went with the ugly option on the triggering arm as I probably would've let myself get hung up on making that pretty. Now I've just got to build one, put the handle on the front bushing, and add a vertical foregrip to the priming handle, and I'll have the 'LangleyStorm' we were talking about.

I think I know how to do that.

Thanks, Langley. I usually have designs buzzing around in my head after a war, but this one came together with surprising speed. Besides, you outlined all the functional elements. I just connected the dots.

As far as slamfire/single fire...it's in the works. The plan is to be able to switch back and forth between slam and single fire on the field, and remain pump action. I hope to get the design prototyped and added on tonight.

Didn't taerkitty dub this kind of triggerless slam-fire "bump fire"? Nice work as always, carbon. Will you attempt a bull-pup version? I think that if you had a more compact version of this, you could have a very effective indoors blaster, or close range outdoors blaster.

Kinda. Same effect, completely different mechanism. In this case, the catch moves back and forth, hitting the triggering bar and firing it at the rearmost point of cycling the pump-action. In the case of my BumpFire DTB, the catch is stationary, and I have zip-ties attached to the slide that double back on itself and pulls the trigger when the slide is at the frontmost point of cycling the pump-action (it's a pump-action DTB when it's inverted and integrated, that is.)

If anything the BumpFire DTB is similar to my suggestion to HamHam for his "I want it to SlamFire and trigger-fire."

As an aside, I call the triggering method 'BumpFire' because someone pointed out that SlamFire requires the trigger be depressed in order to fire. If this were my mod, I'd name it something 'BumpFire' as well, but it's not, so the person who pointed it out to me will have to live with that.

I finally get to post this stuff. It's been a shitty week and a half.

Here's the SNAP-10 with an additional standard trigger installed. It primes the same way as the slamfire mech, but waits for a trigger pull at the end. 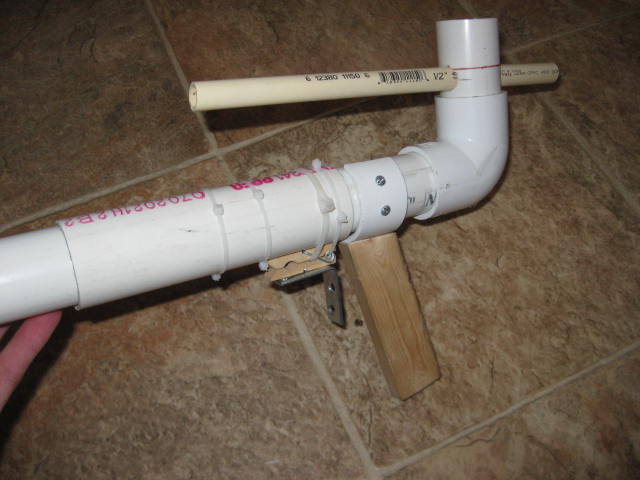 I just installed another trigger on the priming slide, and cut its own slot on the bottom. Here it is rotated back to slamfire: 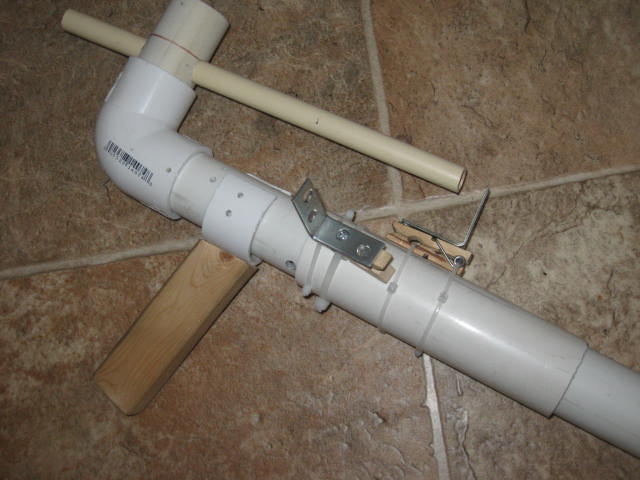 The slamfire mech simply rotates out of the way. To rotate, raise the nail up and twist.

This is the general idea: 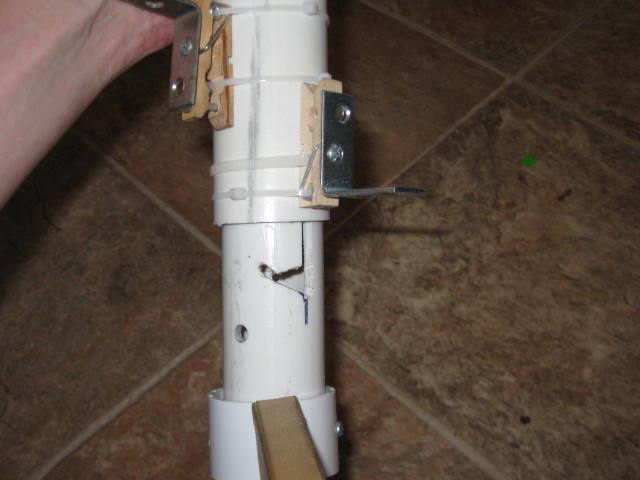 The forward travel of the slot acts as a traditional nail hole.

It's important to state right now that this implementation does not work well at all, partly due to the shape of the slot (what can I say, I was coming down with pneumonia as I was working on this, and not thinking quite clearly). After I had cut it, I realized that the nail will have to move across the catchface, resisting the spring force. Makes for very rough action. I believe a simple checkmark sort of shape would work much better: pull all the way back, then as it moves back forward, twist. It may still be rough, but should be livable due to the lighter spring of the Revolution. Needs more work, but that's the general concept as it stands right now.

Hello. I am Indigo of the Rainbow Clan. You Nerfed my father. Prepare to die.
Back to Homemades