Those of you who frequent the IRC know I've been working on an experimental method to quantify the effects of some of the design characteristics of the blasters we build. What I'm hoping to do here is to give people some guidance on how to perform rigorous, repeatable, useful experiments on their blasters. Science is not for the faint of heart. It requires a significant input of time, money and understanding. It requires good equipment. It requires that you do a lot of boring repetitions. It requires a lot of statistics, and an understanding of those statistics. The fruits of those commitments is the truth.

Currently, when designing a new homemade, or modding an old blaster we really have no idea how far it's going to shoot until we finish it. Sure, there are a few things to guide you (i.e., "put a stronger spring in"), but for the most part it is a complete crap shoot. There is very little good science in this hobby, and I think that's mostly due to the difficulty in measuring the outputs. "Ranges" are an obtuse and misleading indicator at best. Since ranges are only a function of dart weight,


I know of two instruments which can provide accurate readings of a projectile's velocity. The first is a ballistic pendulum. It directly measures the momentum of the projectile, which allows us to measure it's velocity and kinetic energy. I haven't seen any homemade versions of these, but I imagine there is a way to do it.

The second, and more convenient instrument is a chronograph. When you shoot a projectile through this, it is detected by two light sensors. An internal clock counts the time between readings, and gives you a velocity readout. Several members of the NIC already have these, and they give very reliable readings. 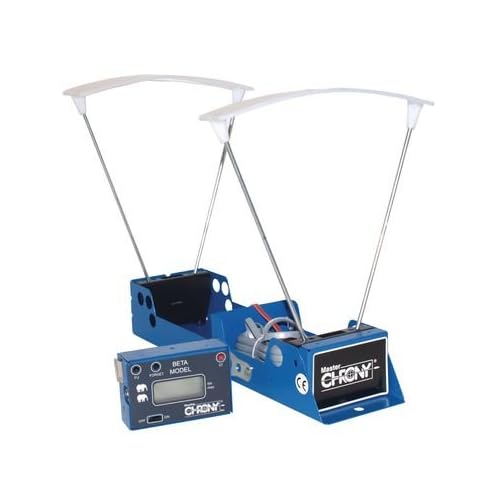 Here's an example of my experimental setup. The SNAP is my testbed, and it allows me to easily test multiple settings. In my case, I'm tested spring types, barrel length, and draw distance. Those are far from the only characteristics to test; plunger diameter, dart weight, plunger weight, plunger friction, dart fit, volume displacement, etc. are all very important.


Here's some example data. I also attached a little school lab report I did based on this experiment. It's still in Spanish right now, but eventually I'll be getting around to translating it. The Excel data is more important, in any case. In particular, take a look at all the little statistical tests I do. It might be overwhelming at first glance, but it is representative of the sorts of analysis that is required of this sort of endeavor. FYI, since this particular experiment was a school project, I used streamlines (they are familiar as "toy darts", whereas stefans are not). Regular darts give you much different readings, so this particular data is not super-useful to us.

Some stuff to note from this preliminary experiment:
- Dart fit had an incredibly big effect on velocity
- While variability is high, with 10 runs of each characteristic you can get p values under .1.
- Chronographs require a diffuse incandescent light source. We initially tried a florescent source (pictured above), but that doesn't work, since it flickers imperceptibly. If you are testing indoors, you need to attach the diffusers, and then place an incandescent light bulb over each diffuser. Super annoying, but it works.
- Check out the effects plots, those are probably the most important

Be sure to check this post again over the next few weeks, as I will be greatly expanding this post as I continue doing experiments. If you came here expecting me to have "solved" springs, then I'm sorry to have dissapointed. I'm also calling on the NIC to run their own experiments, so we can replicate some results. Hopefully, we figure out some cool stuff.

Non-rigorous FPS testing - this is just a quick spreadsheet I made a couple weeks ago with some preliminary data. Gives you an idea of what to expect.

I read through your data and experiment (yes, the spanish too), and the set up looks great. I may experiment with the ballistic pendulum, as I have a book with details on building your own. Just out of curiosity, do you plan on addressing the chamber volume at all?

I will concur with your conclusion that dart fit has a significant impact on velocity. Of course, my observations are far less scientific than yours.

I would suggest that maybe you can upload .xls and .doc files instead of the newer MS Office versions (.xlsx and .docx)?

I too, have done some simple tests with a chrono and a singled 2K. Quite a while ago, I posted the results as a response to MiG's thread about determining the "power" of your blasters. Unfortunately, I was just about out of darts when I shot the video, and I managed to lose all of them in the process of testing. When I finally get around to making some more (I'm out again), I'll see about getting some more data.

For your viewing pleasure:

I would suggest that maybe you can upload .xls and .doc files instead of the newer MS Office versions (.xlsx and .docx)?

I'm going to host in on Google Docs eventually, but I can do that tomorrow.

Just out of curiosity, do you plan on addressing the chamber volume at all?

Eventually, yes. I'll need to build a new rig to test that.

roboman: your setup looks good. I might ask you for some help with taking data

Before I do any further experiments with build parameters, I'm going to do some tests to try to establish what the relationship is between muzzle velocity and ranges. I've got a pretty nice flat area to test on, and a couple 100ft tapes. I need to build a tripod for my chronograph first, so I should be able to directly measure the ranges and velocity of each shot. Not sure what to do about dart bounce, so I'm just going to record where the darts ended up. I'm going to use a level to make sure I'm getting "true level ranges", and I'm going to have someone measure the height from the ground to my barrel (I'm 6'0", FYI). The barrel height will vary from person to person, but otherwise I can control for everything. Hope it's not windy tomorrow.


I added some extra data I took to the second post. I took some measurements of several stock guns, and then again with my test platform. I used stock darts for the stock guns, and slugs for the modified ones.

Thanks for doing all this Beaver. I'm excited about testing and sharing data. I've done a few very limited tests of my own in the past, but I've been too busy to do much more.

I'm looking forward to the range tests. If anyone else wants to jump in, do some tests, and post the data, please do. The more test results we have, the better.

I'm having trouble with my test rig, so I didn't do any range tests with slugs today. I did, however, do some with the vortex guns, and also with a stock nitefinder:
Data and stuff

Take those vortex ranges with a grain of salt, since they bounce and roll on concrete. Still, I'm confident enough to say: the Proton is squirly as fuck. It kicks like a horse, and doesn't shoot straight. The Praxis is very consistent by comparison. I am very surprised by the power difference between the modded Praxis and Proton. I did a spring relocation to the next spring rest on both of these, and their power systems are nearly identical, so I just assumed that they had the same power. Not so. I also have an stock Vigilon which shoots about 50fps, and who's performance seems similar to a modded Praxis. Don't let those high ranges fool you into thinking the Proton is good - the Praxis is clearly superior, if only because you can actually hit things with it.

The Nitefinder stats are what you can expect from most stock dart guns. It is significantly more consistent and accurate than the vortex blasters, but at the cost of significantly lower ranges. It's worth noting that vortex discs are not slower than stock darts. Rather, they just stay in the air a lot longer.