My Scout Went to the doctor today

***EDIT I can't change the title. It's an Element/Disk Shot. My bad.


I decided not to put this in the mod/paint section just yet because from the outside it looks pretty stock aside from the barrel. A paint job is coming but I decided to post this now because it made me laugh.

You can see from the top pic that it has an extended draw and an internally couplered barrel of 4" of 0.5" CPVC nested inside 3.5" of aluminium. Not a big deal, I know.

...but it's what's on the inside that counts, right?

During one of the film shoots I was on 4 weeks ago, there was a scene in a hospital. The hospital location was actually in our local College. I was surprised that they had such a facility and was even more surprised that it was a fully functional hospital/emergency centre. I'm telling you, they had at least 25 beds with monitors and a full on ER!...

Anyway, as we were wrapping up I stumbled upon a few things kinda 'swept under the rug'. After some kind words, I was allowed to take a few of the said items home.

This is what I did with them.

Upon opening up the DS/Element, it is immediately noticeable that I have replaced the plunger tube. 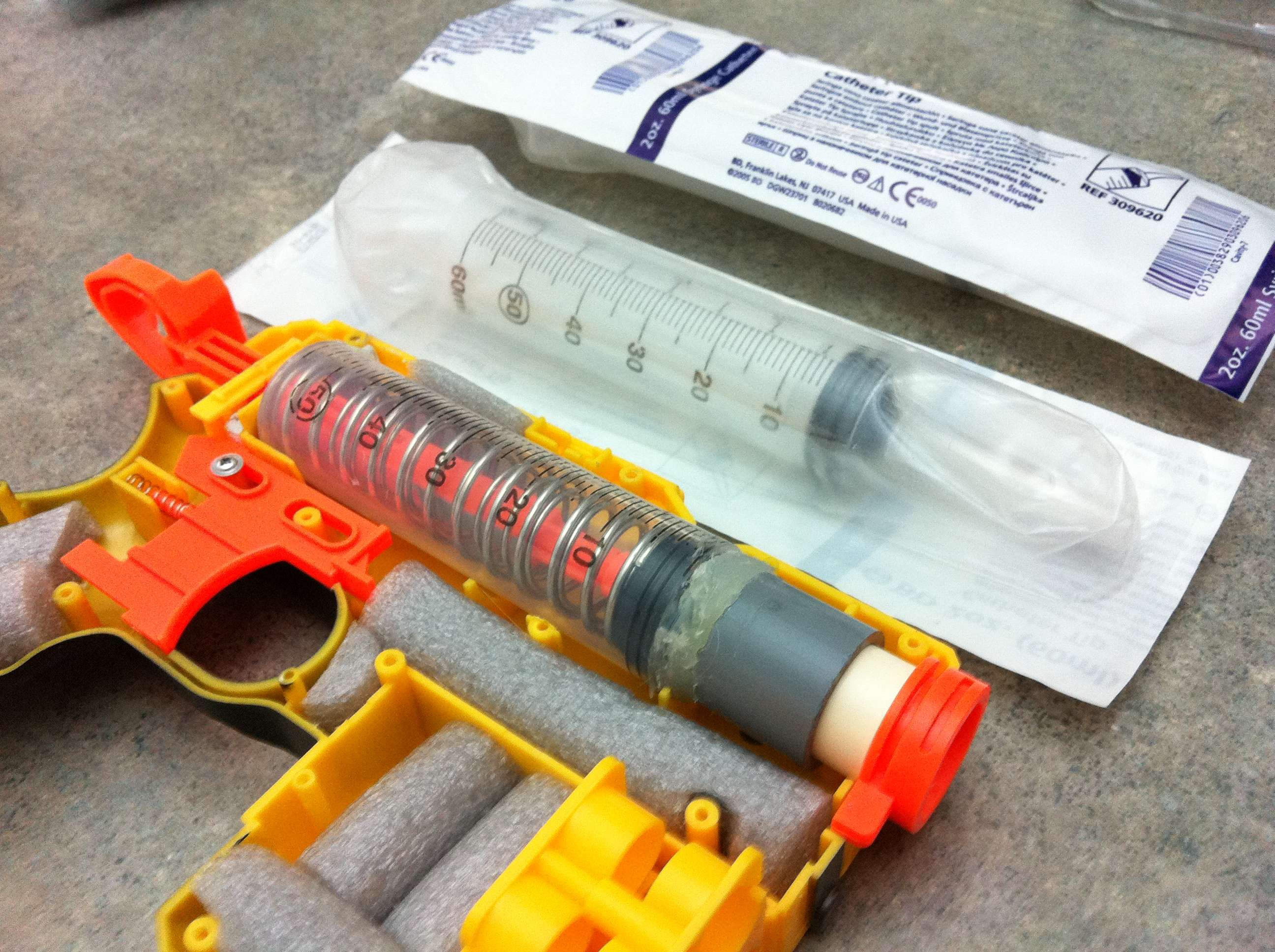 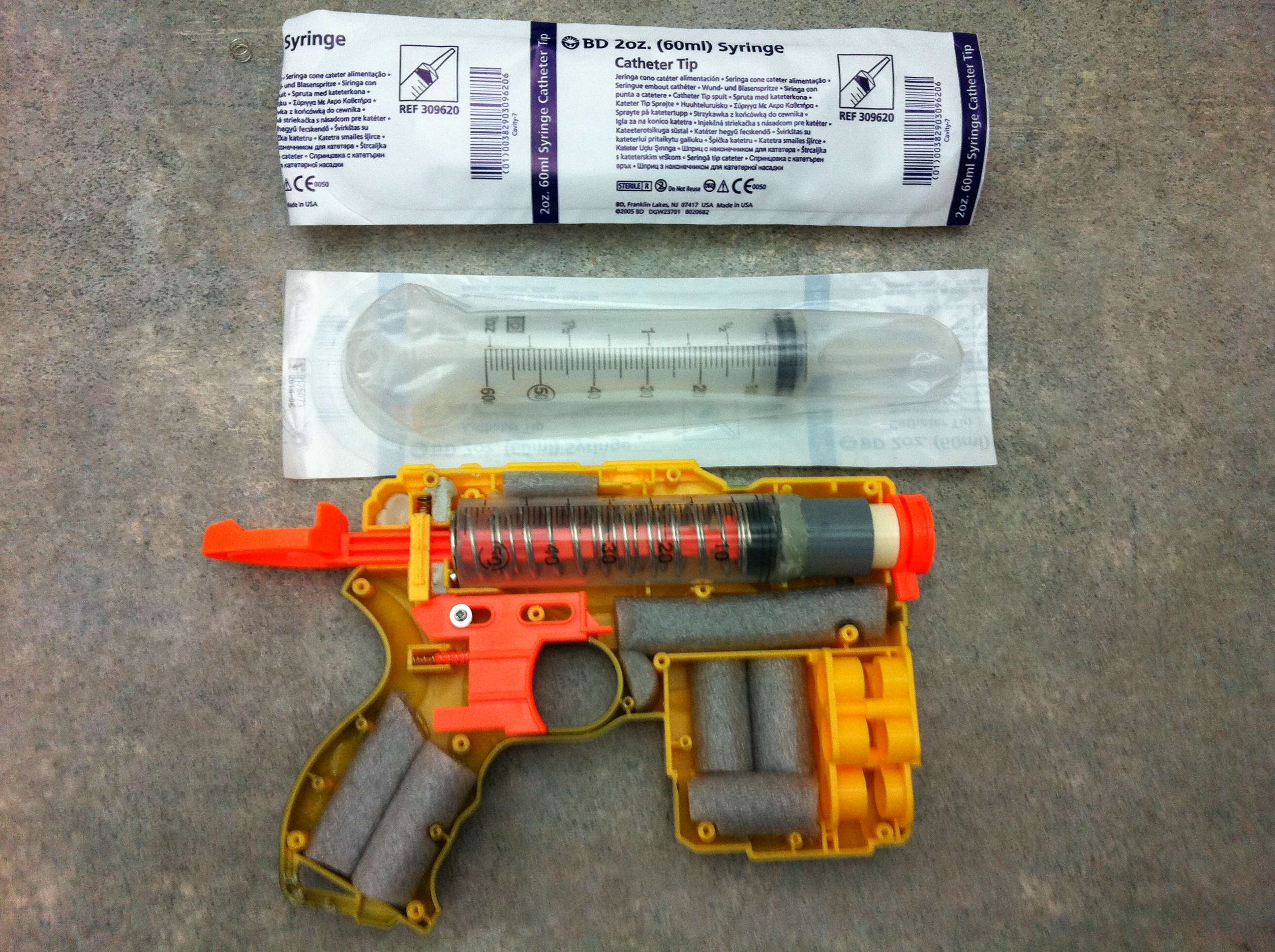 I made the syringe about 0.5" longer than the stock plunger. It's also about 0.25" wider in diameter. The shell has been dremeled out to accommodate the Syringe. 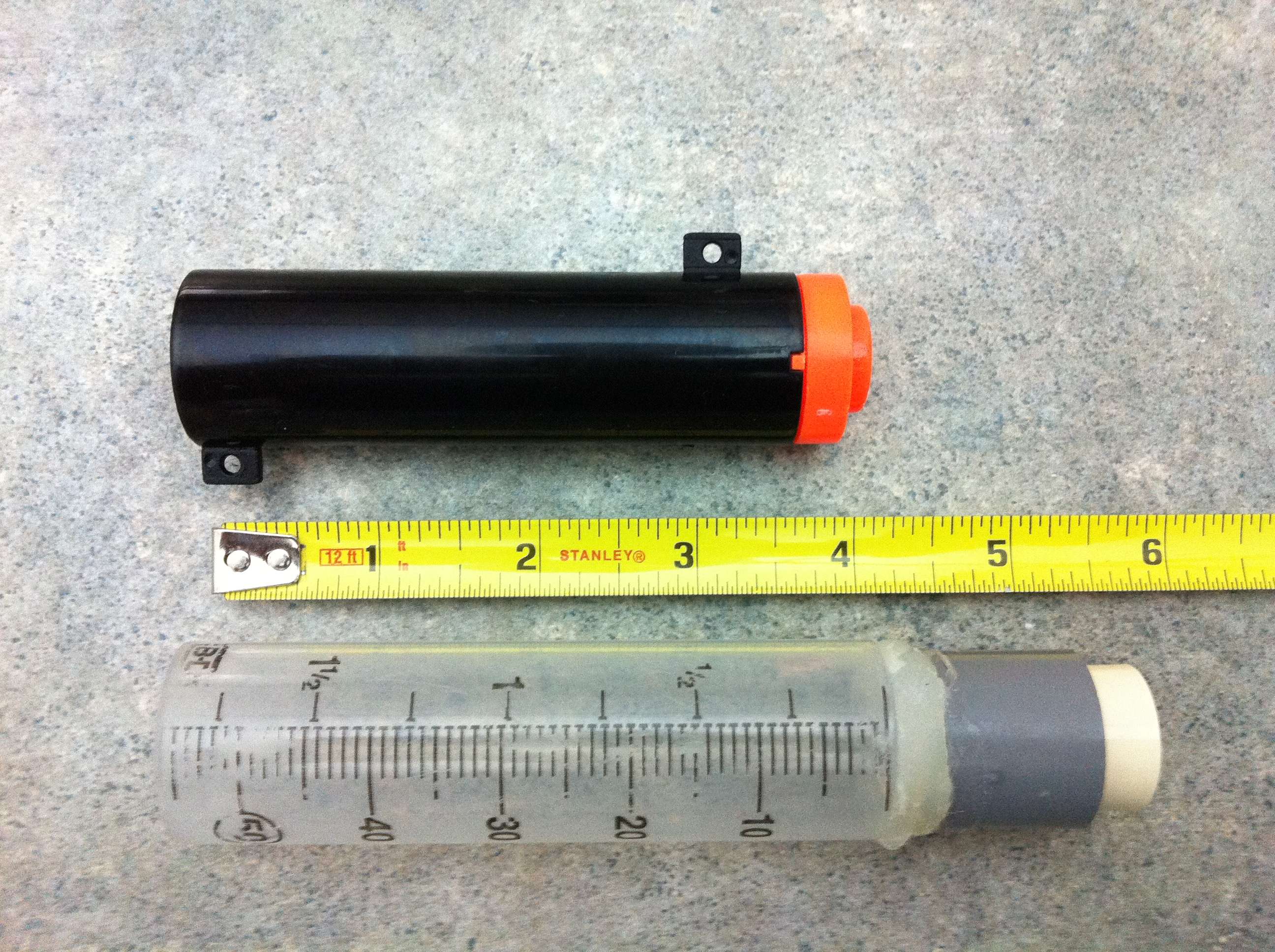 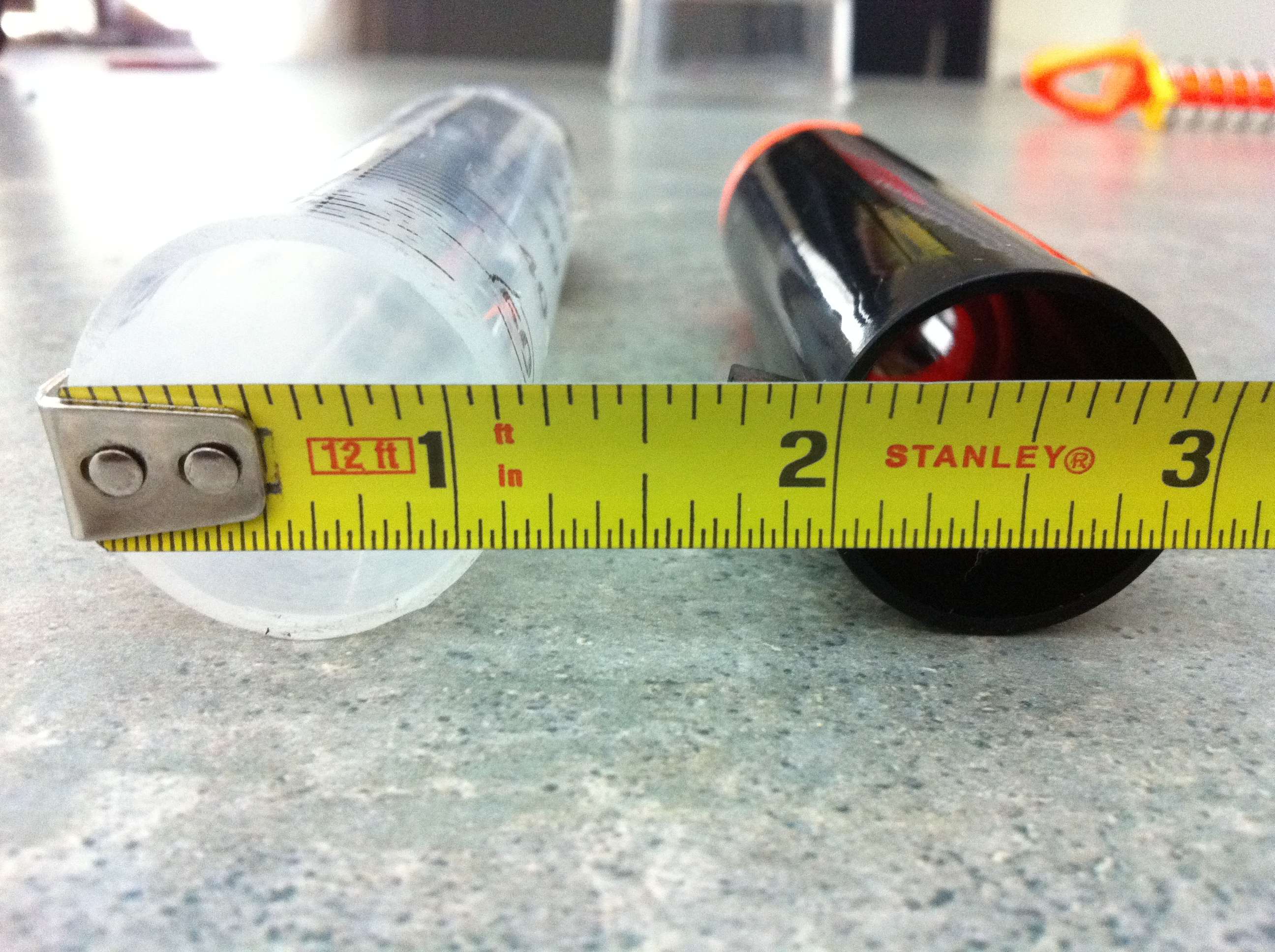 I chose not to use the whole length of the syringe because I knew I was using the Triple Shot spring and wanted it slightly pre-compressed. I actually wound up using a similar industrial spring as well. 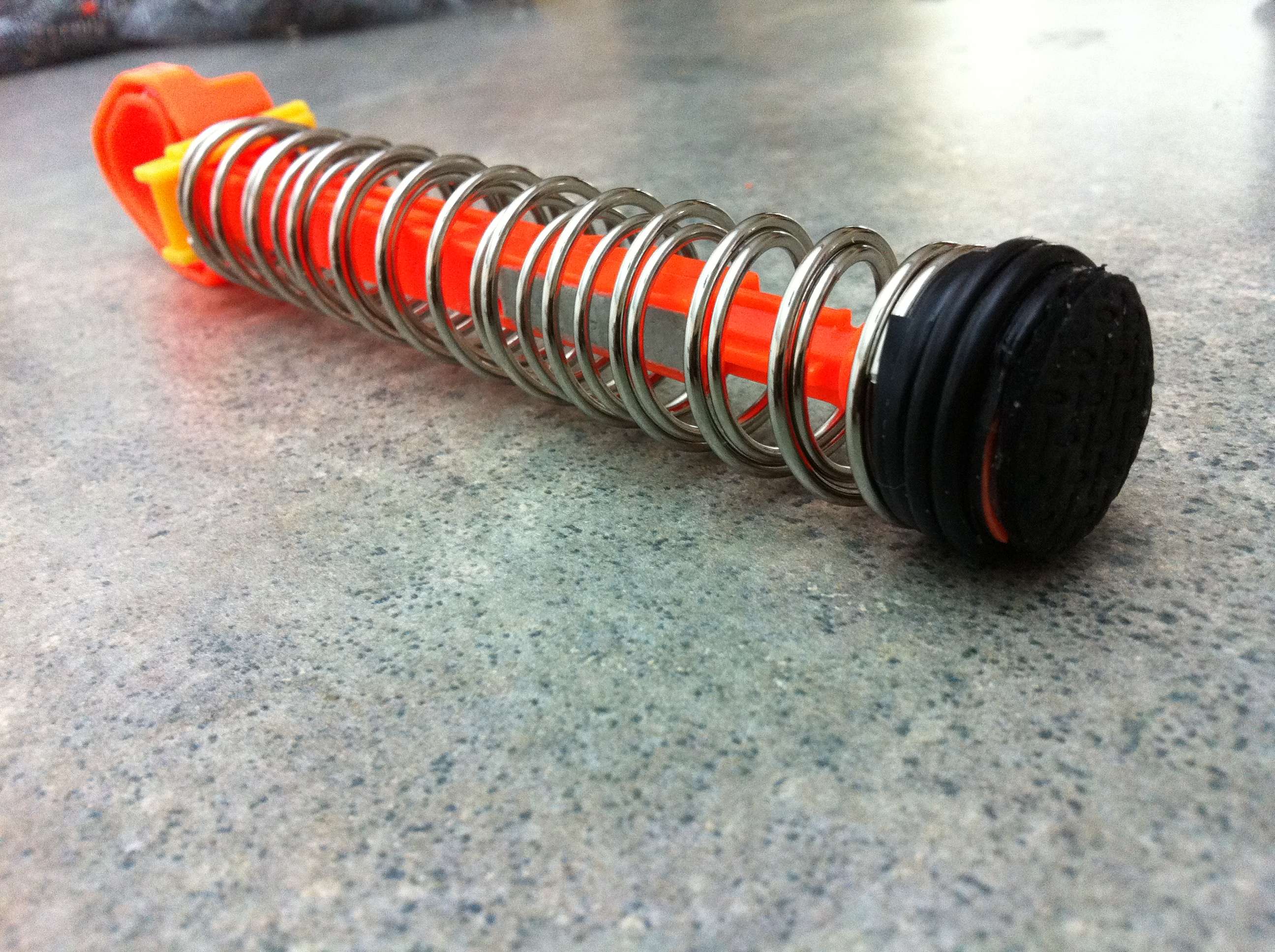 I used a metal rod and epoxy putty to help reinforce the plunger rod.

I also deepened the catch notch so the catch could seat in more securely. 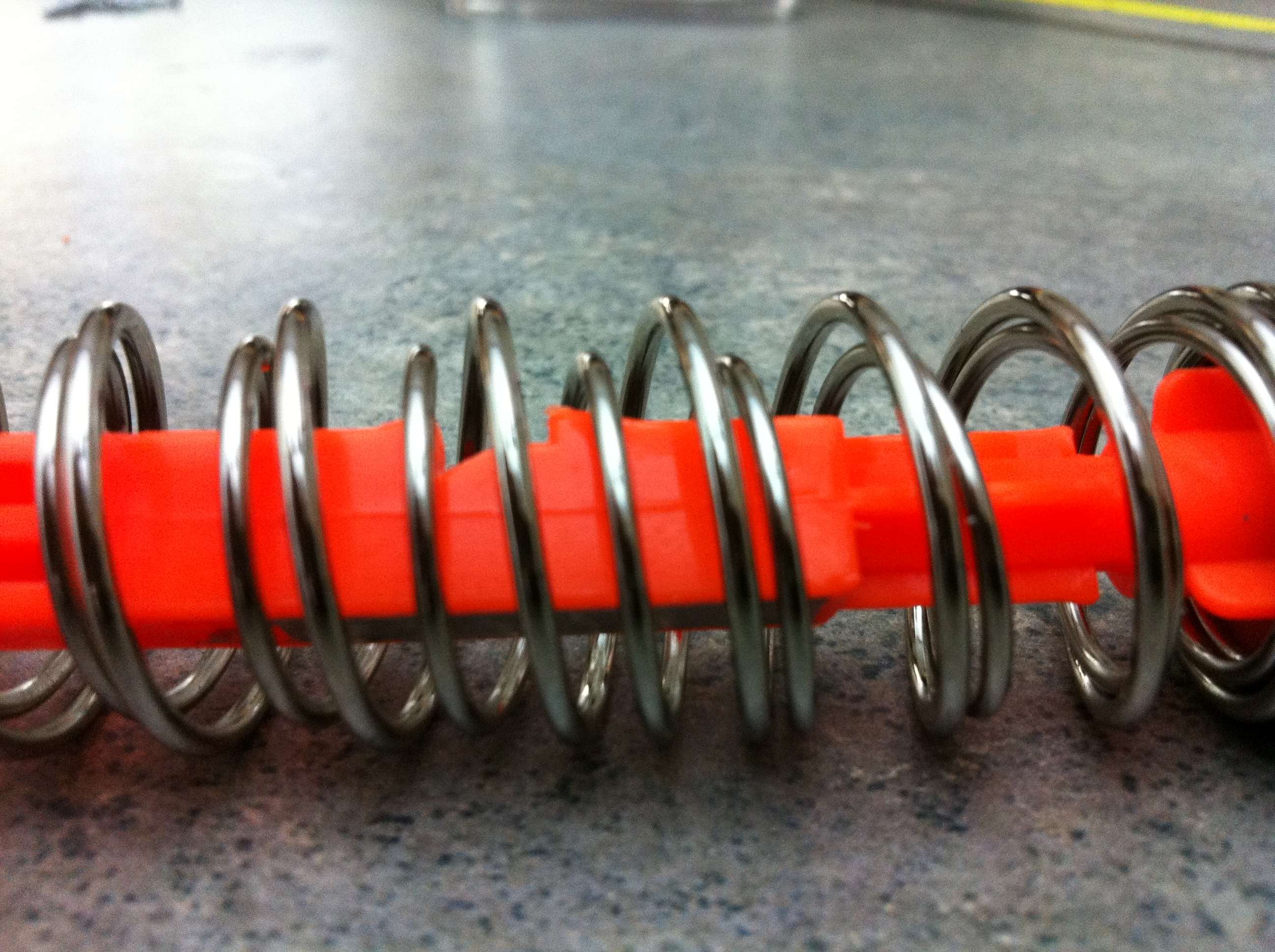 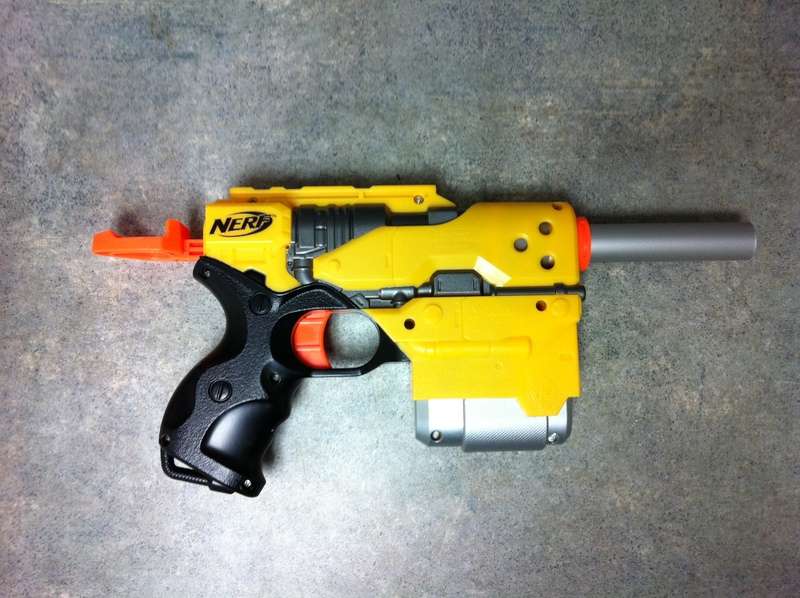 Because I can't resist the cheese, it does vacuum load and it is 100% HERMETICALLY sealed! BUWHAAAAA....!!! (...I'd like a red Merlot with that please.) 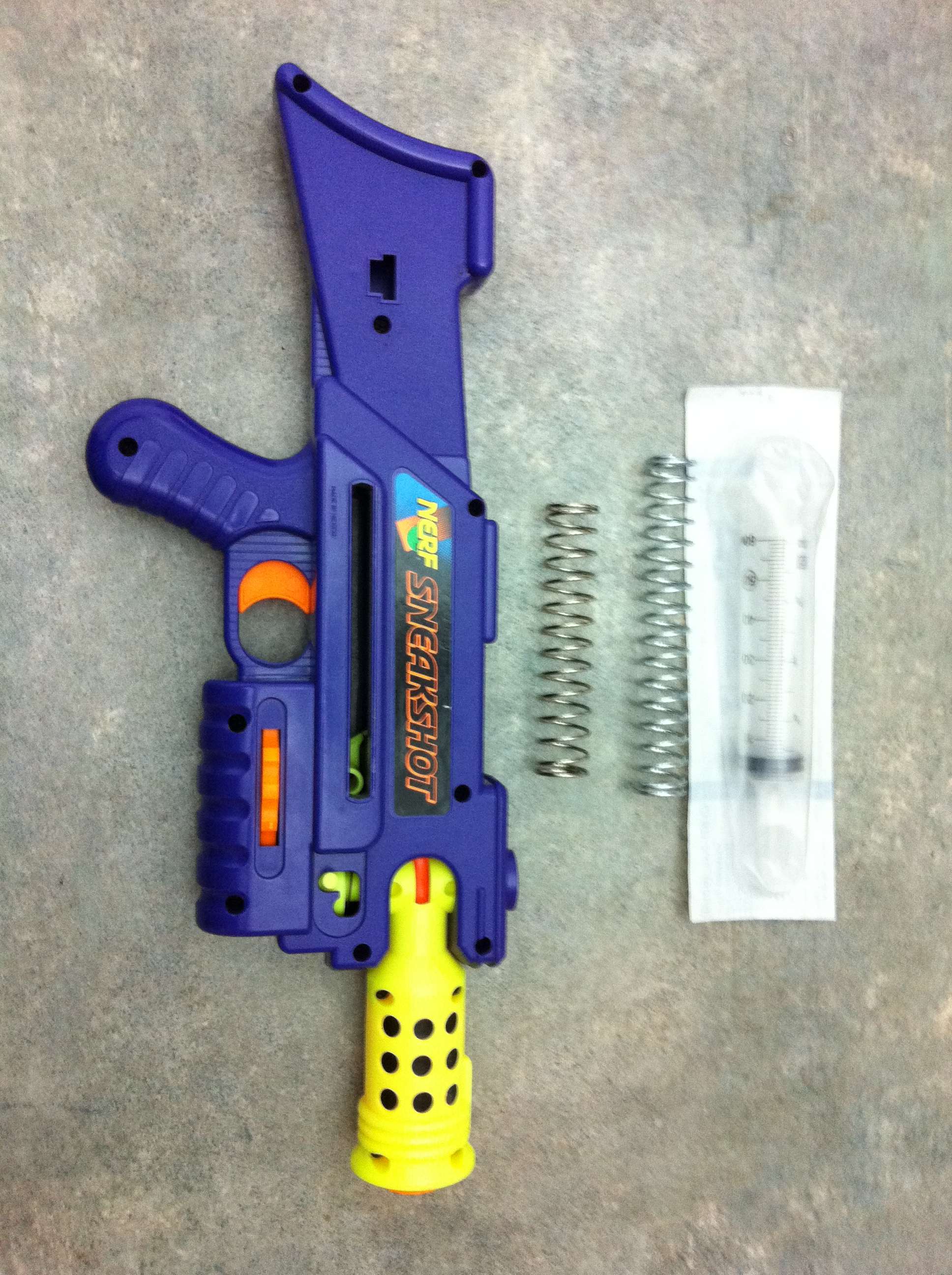 - The original plunger head for the syringe was too tight to use affectively. ie. It caused too much friction.
- The Disk Shot/Element plunger head is actually a little too small for the syringe. I used extra layers of e-tape and 2 orings of slightly larger guages than the stock o-ring.
- The coupler in the front is a CPVC coupler nested inside a PVC coupler. In hind sight, this was unnecessary. But I had already gooped them together.
- Shell minimization is not planned. I want the surface area to create a more than awesome paintjob.
- This mod would work for a Nitefinder as well.

Awesome use of spare medical supplies, lol. Did you think about using the syringe head as the new plunger head? or would that not work?

Great use of the syringe. One of the great things about medical supplies is that they are machined to amazing tolerances. Syringes (with the original plunger heads) are more or less perfectly airtight making them great to use in valves etc. It's great to know that the NF plunger head actually fits though. Did you not use the syringe head due to friction issues?

Finally validated on NerfHaven!
First off, MIG, great idea and use of a syringe, it's really creative. I have had one of these syringes and was wondering about it's uses for Nerf.

Did you not use the syringe head due to friction issues?

The syringe head (at least in mine) has a very tight fit inside the syringe tube. My guess is it would have friction issues. Also, the head is not screwed onto the "Syringe Rod" and you would need to cut it off, which wouldn't work because I cannot think of an adhesive strong enough to hold the head on.

If you mean just the rubber seal of it, I doubt it would fit onto the plunger head straight, causing seal issues.

I don't have access to that spring. McMaster Carr, doesn't ship to Canada as far as I know.

I get most my springs from a local Mom and Pop hardware store, Preston Hardware.
The company that makes them is from Quebec.

Some of those look impressive but there's no way they can be used in a foam blaster. The really beefy one in the middle at the bottom is rated at 272 POUNDS MAX LOAD. The 2 longer skinnier ones to the right at the bottom are rated at 130 pounds max load. The one at the very top right corner is the one I use in my Octos and quads. It's rated at 36 pounds max load. And the one I add in my pistols like the Element above is the spring smack dab in the middle just above the beefy one. It's rated at 38 pound max load.

It's really great that you have access to all those different springs. Also, great use of the syringe. I bet that if you put a [k26] spring in there (cut down, of course) you could ranges up in the 80-90s. Is it possible to add lubrication to the syringe or is there just to much friction?

Did you only put that syringe in as a plunger tube to get more length, or did you use it to get a better seal? It's also great that you have access to all those springs because my Home Depot only has a few spring.

Very nice mod makeitgo! I love your mods so far, and am extremely jealous of your mom and pop store with such a nice selection of springs.

Nice use of the syringe as a replacement plunger tube!

For people asking about using the syringe plunger as the plunger head, I tried that a few years ago when I made a syringe popgun. The plunger head has a perfect seal, but it's meant to go slowly, and even shaving it down slightly didn't fix that. Also, attempting to lubricate it caused it to almost lock up in the tube...they're meant to be lubricated with water (which makes sense, based on their intended purpose).

That's a pretty sick idea. And it's fun that you can have a fairly close idea of the air output. The sneak shot seems like it'll be awesome too, I love when people make the fun blasters more useful.