I remember being about 12 years old and spending my allowence on a crazy ass looking Nerf blaster at K-mart.....a WartHog! Two shots at once?--yes please! Sadly, it made its way out of my hands eventually. Well, now I have another at long last! WartHogs have been modded before of course, and some of this write-up is nothing new.....a few things might be. Regardless............... 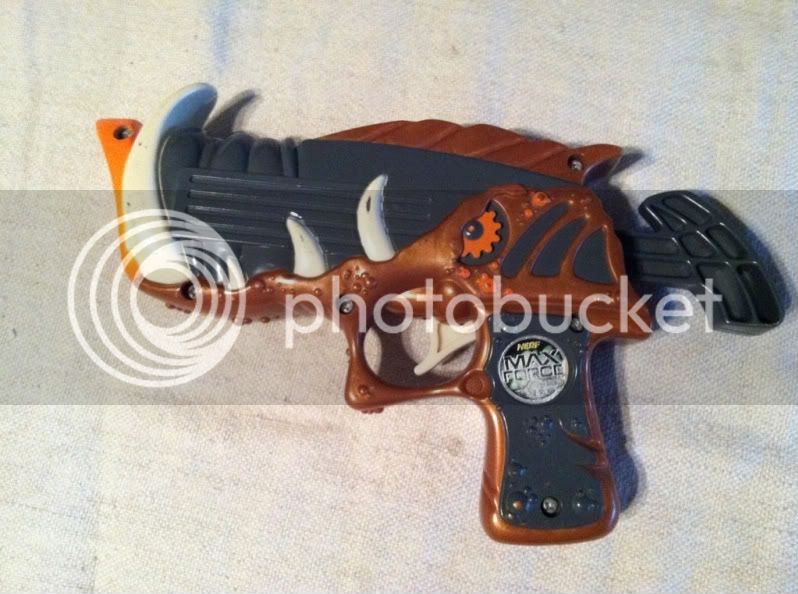 open her up---pretty easy, just be ready in case parts move when the shell comes apart. 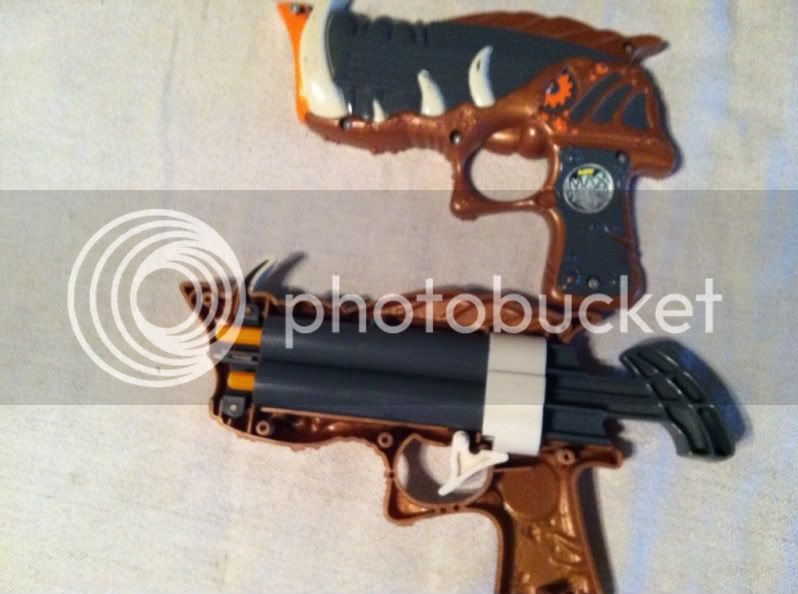 Remove the internals--after taking carefull note of the position of the catch. The catch is the big white piece. Set your parts aside, as we are about to get to cutt'n em up!

Take your Sled---we need to cut those A/R pegs out of it.

Cut the A/R pegs right at the base of the PlungerHeads. After cutting them out, clean up any plastic that may be hanging on or sticking out. Make the base of those plungerheads flat.

Open those bitches up! I used a 7/32 drill bit for this. Now we are gonna move some air......through proper barrels. Go back to your sled. See that tab on the sled that the A/R pegs used to rest on? Lose it! We want our barrels to ride nice and tight to the sled.

Now we can Re-barrel!...This is where things get interesting....and original in my opinion. Most modded WH's use brass for the barrels.....I am out at the moment. I decided to go the road less traveled, and looked into my spare parts bin. What do I find? Spare Deploy parts! When I overhauled my Deploys I ripped out those goofy useless "scopes"---just plastic tubes, THAT HAPPEN TO HAVE ALMOST IDENTICAL I.D AS CPVC WITH A MUCH THINNER OUTSIDE WALL!!!!

Yep, thats right fella's, Deploy scope barrels! The thinner wall allows these babies to sit nice and tight in the WH's sled. WIN! Cut two 4" sections of the Deploy tube, and glue into your sled.

While I had the Deploy tubes handy---I cut two ammo holders to fit into place in the WH's handle----which was designed to hold spare ammo anyway.

Lube up your plunger assembly and plungerheads. Fit your internals back into your shell. Again, take note of the position of the catch.. Also be aware of the tab on the under side of the plunger assembly---its what moves the spring, which means when you put your WH back together--the spring better be behind that tab or your blaster wont prime right.

Put your shell halfs back together---a bit tricky, as the WH's spring puts a bit of pressure on the plunger assembly--so you will need to hold the plunger assembly down as you slide the top half of the shell on. With the blaster put back together, I wanted a bit more power. I drilled two small holes up front, and two in the priming handle--to add two bungies.

Normally I am against this, but the WH has such a strange spring. I have yet to find a proper replacement--but the bungies are not all that unsightly, and they certainly do add some noticable power.
This blaster is compact, capable, and has mad swagger......all good shit.

I love using deploy scopes as barrels. I did this in a BBB, had to use a ramrod which is lame but it was pure magic.

Maybe there's no Mcmaster, but you could make the first coconut airtank.

These things are a bitch to reassemble, though.

These things are a bitch to reassemble, though.

Thanks Dizzy. Yea, they can be kind of a pain--thats why I tried to show the tabs and such. Knowing is half the battle.

Is it powerful enough to shotgun-load the barrels? I have a friend with one, but I never bothered to get it from him since I heard how tough they are to re-assemble. If I could carry around a little shotgun that shoots off like 8 darts at a time though I might change my mind.

I like that deploy scope tip, there should be a list somewhere of random nerf parts that work as barrel material.

^ It really should. Like I said 1-1.5 layers of etape and it is a perfect fit in the arrow shooter barrel on a BBB.

Back on topic. As I said before Rogue Im glad your back to posting original mods. You have been missed.

Maybe there's no Mcmaster, but you could make the first coconut airtank.

So I got a warthog... Does yours have a hole in the pullback handle? I found some hot glue on mine (i bought it somewhat modded), and i tore it out. That revealed the hole. Just wondering if this is some random drill hole, or if it was put there by nerf since I didn't see you go over it in your writeup.

Aww man. Next to the Secret Shot II, the Warthog has the beefiest shell ever. Filling it with FBR and hot glue creates the best pistol for pistol whips.

Also, loser (just to see if it censors that)

Doing this as I speak. I have no idea when I got it...my DAD got it some 15 years ago, but that doesn't matter. Anyways, it keeps jerking around all over the place. I try to hold it with a rag...It doesn't look like...much.
Back to Modifications · Next Unread Topic →