Keep in mind, guys, I just copied and pasted this from the Trading section, so it's more trade-oriented.

Long time no post...it's been awhile. I'd just like to take a moment to give you all an idea of what's been going on in my life for the past year plus, and why I've been so inactive, for those who don't already know. On the Friday before Christmas two Christmas's ago (the 19th of December, I believe it was), I lost my house along with everything in it to a fire. My family, my pets and I were all that made it out unscathed, other than a few lucky breaks with several cherished belongings passed down from my great-grandmother as well as our many photo-albums filled with pictures from family events throughout the years. This loss included the entirety of my nerf collection. Not only does this mean guns, but spare parts, tools, modding materials, darts, etc. were all gone. As it was a total loss, we decided to rebuild, and we rebuilt the same house from the ground up (appart from the foundation, which remained intact). Although there are some differences and everything's obviously new, the structure and floorplan of the house are almost identical. We moved back in just before Thanksgiving this past November. In the meantime we lived at a rental house nearby where I had essentially no area to mod, limited tools, and limited time with all that was going on. It was hard, but life goes on, and you get through it. I'm really, to be totally honest, just happy to have my family. The fire started as a result of a rusted out cap on the bottom of the chimney, in conjunction with dry leaves, a dry night, and a spark (or so we believe). It happened at 10:30 PM or so, and we were all home, awake, about to go to sleep. The fire wasn't put out well into the morning hours, and at that point, it was too late. Throughout the time in the rental house I did modify several blasters, prepped for apoc, etc. I also attended a BCNO during that time period, so I have plenty of blasters, and now that I've found my darts, things are shaping up nerf-wise. I still though, unfortunately, lost all of my spare parts, tools, and many blasters that I, and others, put a lot of work into. Fellows, the fallen: 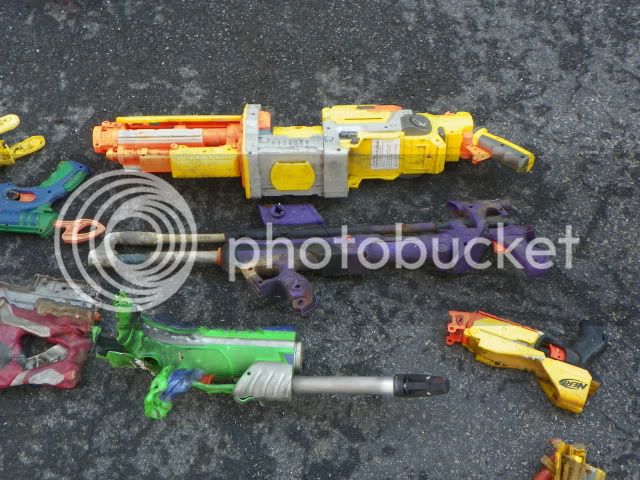 All of the above were spared to some degree, leaving melted remains behind. Everything in my bedroom was gone entirely, including my crossbow, other SNAPs, Plusbow, etc. In some of the cases above, actually, most notably my SNAPbow, you're seeing it's "good side." It didn't want me to take a picture of its bad side. These remains are all for sale if there are any crazies out there interested in some modern art

Now, I'd like to address another thing. There are a small group of individuals out there who questioned the authenticity, the truth to the tragedy that my family and I underwent, stating that I used it as an "excuse" to get out of things, to not hold up on transactions that I may have been involved in. This is, for lack of a better word, bullshit. Someone who would fake what I went through in order to cop out on obligations they've made is a horrible, horrible person. Something like this is not something you make up "for funzies." So those of you who were "calling bullshit" on me, and you know who you are, I hope you feel like ass holes. That's all on that.

Keep in mind, gents, this isn't a search for sympathy, just a conformation for those of you who were unaware as to the reasons for my absence or the nature of what happened to me last year. I will be posting this in off-topic as well, intentionally as it belongs there as well.

As for the second portion of this "sales thread," if any of you have any of those "spare parts," that I mentioned earlier that you may be willing to part with for little to nothing, I could really use them.

I also posted several videos to this channel throughout the time at the rental house discussing it all. I also will be posting videos as my workstation begins to come together and other assorted nerf-videos, including a tour of the new house.

Hey, as a token of solidarity, you want an NF, gratis? We gotta support one another.

I could part with a silver AT3k if it'd help you.

If you make it up to a Canadian war there will be a blastfire waiting for you.

Hey, as a token of solidarity, you want an NF, gratis? We gotta support one another.

If you make it up to a Canadian war there will be a blastfire waiting for you.

^One thing that I very much hope to do in the near future. Thanks a lot man. We'll see 'bout that one. By the way, FA...

...I don't know if you recognize those longshot remains...

Wow, that sucks man. But at least you're still alive, with family and pets. that's always a plus.

...I don't know if you recognize those longshot remains...

Damn. Sometimes I wonder if my contracts are being put to good use or not.
Never thought I would lose one in a fire.
It's like losing one of my babies.

Damn, that sucks, FA. I know you put a lot of sweat into those blasters (though, hopefully not literally.)

DB - got a box of junk (and some crap foam) ready for you. And a brand-new, AR-still-in-place NF. Addy?

Well it seems I am getting out of nerf and have ALOT of unsold guns all of these guns ALL of them you can have for cheap since no one else seems to want them I also have like 2000 feet of my black foam if you want some of that to.