So, I was browsing Amazon for blaster deals when I stumbled over this oddity: 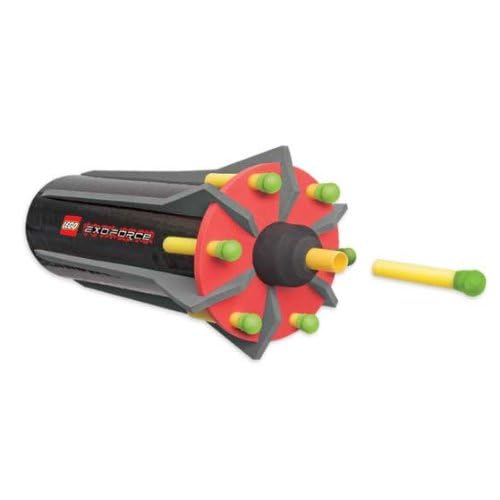 Instantly, visions of Noob 001's Arm Cannon danced through my head. Fantasies of dressing up like Megaman and blasting the crap out of Eggmans (as in throw at my car windows) in eleven days.

PRO: The tube is large enough (3.75 inch ID, 9.5 inches long) to admit an adult hand, and I've got pretty large hands. The darts are comparably-sized to Micros, sort of a "matchstick" version of foam-head Buzzbee darts. The barrel has no air restrictors or post!

CON: IT'S A SMEGGING CARDBOARD TUBE WITH A SQUEEZE BULB. The decorative fins and dart holders are just craft foam, albeit thick craft foam. Stock range is laughable at best, limited to how fast I can squeeze the pistol-shaped grip inside the tube. Again, it's just a squeeze bulb like those cheapo guns in the front of TRU or the overpriced abomination that is the "Pop Shotz 3-in-1 Air Blaster." It's not even Lego-compatible! You'd think they'd add a few token sockets for bricks on the side.

MODDING POTENTIAL: Actually, pretty high. As I said, the tube's large enough to admit my over-sized paws. So, rip out the bulb and replace with guts from another blaster. Current-gen to keep costs down, air-powered so the plunger rod doesn't rip my hand open. Maybe a Buzzbee Mega Missile, stripped down until it fits inside? Only $5 from my local Five Below.

Hang on, the bulb just twisted off in my hand, barrel and all. A slightly more deliberate tug took the black cone off the front of the cylinder. Now I've got an intact arm casing, ready to admit new internals. My first-gen Mega-Missile looks like the internals will fit, but I want to check out the current-gen. It's smaller internals might make a better fit.

Believe it or not, I've also got a still-functional squeeze-bulb blaster! The internal bulb is sort of a squarish version of the Pop Shotz, sort of like a craft foam Double Shot. The barrel's a little loose on darts, though. Apparently, it relies on the rubberized "matchstick" heads of its stock darts to make a seal.