Alright, I had great success with my first Disc Shot, and all I did was move the plunger about half an inch further. I had a spare big blast/berserker pump, and I believe I saw a post somewhere where someone used that as a replacement plunger tube but I have yet to find it. On to my plan...

So, I cut the pump head off at the seam:

And I plan on putting it on the plunger rod with the back portion of the plunger head. I did this because I don't know if the weak plastic of buzzbee could handle any decent spring.

Now, the walls are in the way on the end. No big deal there, I would chop them off even if I was doing a normal extended draw. So far so good right?

But then I realized I had no idea how to attach a barrel or coupler... I was thinking of putting in a piece of pvc into a pvc coupler so that some length of it could go into the plunger tube. I would then wrap this in E-tape until it fit snug... but that's no small amount of electrical tape. I don't know how that would work, since only one outer layer of electrical tape would be glued to the tube, and I would guess that after a number of shots it would unravel. I plan on putting in a full length replacement nf spring, so about an inch more than a normal length nitefinder spring, nothing crazy. I would to see if this is the general idea of what to do next before I do something stupid.

Go for it
and post results.
If you dont want to, fine.
But I think this is very interesting and would like to see results.

That was my post you were thinking of. I just used an e taped PVC stub superglued to the coupler, and secured it in with a bolt, then sealed the two holes with goop. You can also increse the draw my cutting of those ridges and then sanding the inside of the pump head - it'll goo farther over the bottom half of the nf/ds head.

Pics are on page181 of mod thread

You could use a PVC bushing that somewhat fits the dimensions of the plunger tube wrap some e tape around it to make it snug and just goop it in. Using a PVC bushing would definitely cut down on the amount of e tape used and would also be sturdier than a stub of PVC with lots of e tape around it. Personally I also just like bushings better then couplers.

After you goop in the bushing make sure to drill a hole through the plunger tube and bushing, and then thread a bolt through and goop the bolt in, so no air escapes.


Hawkshot, one of the founding FL Nerfers.

I think a 1 1/4 inch pvc bushing just might work. I'm pretty sure that 1 1/2 is a little too big because I've used those end caps to seal off the ends of bbbb tanks. That section that bridges the gap between the pump and the tank is a little thicker than the pump tube itself. But if 1 1/4 inch doesn't work, I'm sure a 1 1/2 bushing would work instead.

Thanks for all the responses. I don't have any thing to do exact sanding, so if I sanded anything it'd be off center for sure. I think I'll just be doing the PVC and E-tape, just t try it out, and if that seems to work I'll drill a hole and goop it in with a screw or something. I still have to do a bit of sanding, it's hard to find the spots you still need to get once you get near the end. At any rate, I can sort of close the shell and cock it, and it looks like it's fine. Tantum, I'll try out your idea once I get the plunger tube set up. 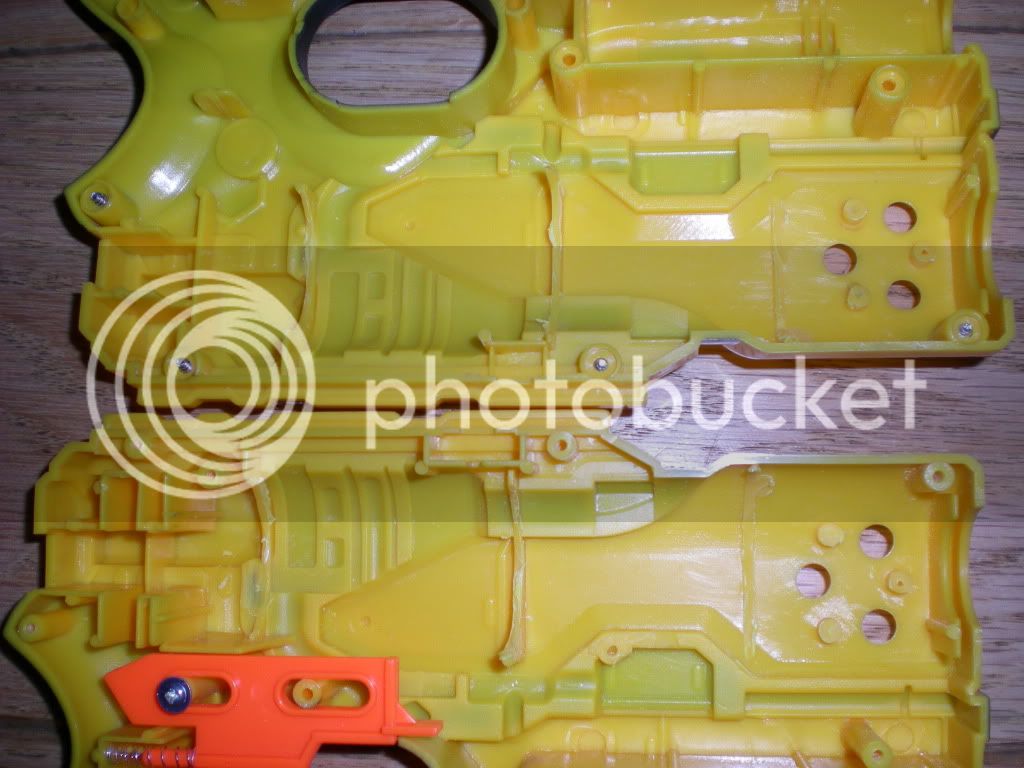 I did what Tantumbull suggested, it didn't quite fit so the plastic is kind of stressed.

Now for the plunger tube:
This is what I hope it will look like internally after a shot

Now, the plunger rod can go further into the shell, but the back stops it.

I think that lengthening the plunger rod would solve this.

Now, the gun gets maybe 30 flat with megas with the stock spring and the poor seal of pvc in electrical tape. I would like to know if lengthening the plunger rod to accommodate the spring is at all worth it, or if I should just finish off the mod and use a cut down one? Thanks.

I would recommend putting two Danco #17 o-rings on your plungerhead. This will give you a great seal in the plunger tube.

The yellow balls are also slightly smaller in diameter than the green ones.

You should just cut down the shell so the plunger rod can move forward more.

You should just cut down the shell so the plunger rod can move forward more.

That wouldn't do anything for the spring length though, the distance between the catch and the end of the plunger head is not long enough to fit the number of coils. Also, I would imagine the spring to be very rattley after a shot since there is so much extra room.

Hi Yah: Do those work on the buzzbee pumps?

On my bbbb's I use one #17 o-ring and my over pressure valve pops at 7 pumps. I figure 2 should give you a great seal.

The yellow balls are also slightly smaller in diameter than the green ones.

On my bbbb's I use one #17 o-ring and my over pressure valve pops at 7 pumps. I figure 2 should give you a great seal.

Just don't put two in an actual 4B. 2 o-rings will negate the stock method of preventing a vacuum.

I did more work on it, I still have some issues with it catching with a stronger spring.

It closes up fine, and I have been getting maybe stock ranges with a larami in that stub of pvc. I have a CB spring in it. Anything stronger and it binds up and messes with the catch. I also think the plunger tube is not exactly straight, not sure if that means anything though. As far as fixing the catch, I plan on cutting out a circle or something and making a piece similar to the back plate of a PAS.

This is awesome, I've wanted to do a PT extended nitefinder for some time, but didn't want to butcher the shell. The disk shot shell is pretty much built to handle a longer plunger tube.

I don't have a 4B pump or anything, what size of PVC would fit the stock plunger head? 1"?

This is awesome, I've wanted to do a PT extended nitefinder for some time, but didn't want to butcher the shell. The disk shot shell is pretty much built to handle a longer plunger tube.

I don't have a 4B pump or anything, what size of PVC would fit the stock plunger head? 1"?