I'm working on making a Doomsayer as a last summer project before I have to slow down my work for college. (Mainly due to lack of tools at my apartment). All was well until I was reassembling the turret so I can test the rotation mech.

(shown outside of the larger black piece to show order, it's correct, isn't it?)

Another view, pieces spread out

the metal bar does not extend out of the last big beefy gear piece to attach my 1/8" pushnut fastener. As can be seen here:

I've read how important that fastener and it's position is, so I don't want to cut down the black plastic tube on the big beefy gear to expose more metal bar without first getting some advice.

I've taken off the pushnut fastener from the other side (the part of the turret facing away from the plunger tube) and put on a new one hopefully a little further up the rod to get me a little bit of space, but it didn't work.
My gears were glued where AssassinNF glued his, seen here, because I'll be using CPVC barrels. I took off the glue, but I still don't have enough room.

Here's some pictures of my glued over spring. The center is wax paper, I had to be creative in how to be able to get it off the beefy gear without using lube.
It's flat at the top and bottom, except where I've tried to cut away a little. It does not compress at all. 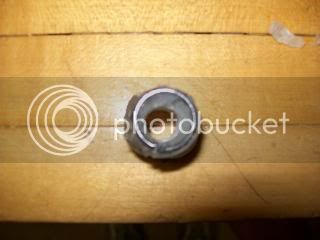 and here's a picture of how much of the metal bar is extending from the other side:

I think the problem is that the flat plastic disk that goes over the spring is sitting too high. But to go lower, the spring must compress. Has this happened to anyone else? How should I fix it?

Edit 2: Thanks, Salmon, I took off some hot glue and got it working.

The spring needs to be able to compress a little bit. Not much, just enough to get 1 or 2 pushnut fasteners on.