I've been doing some research on how to improve the performance of some simply abysmal spring blasters. We all know that there is only so much you can do with stronger springs and a better sealing head. Sometimes the stroke length can be altered, like in that DTG mod from a couple weeks ago. But in many cases, such as the First Shot and Max Shot, the priming mechanism really can't be changed. So this really only leaves bigger plungers. The First Shot is one of those blasters that really needs it too. The stock plunger tube has only 12.5cc of plunger volume. Compare that to 21ccs in the TTG, and 25cc in the Recon. We'll be increasing that to 27ccs. Yep, more than twice the volume. It really doesn't take all that much. We are going to be fashioning a replacement plunger head similar to CaptainSlug's Longshot head, to match our new plunger tube.

I'm not going to go through the entire mod, mainly because I can never remember to take pictures when I'm in the zone... If you want a look at how everything normally looks, check out OfAllTheNerf's writeup.

The supplies you will need are:

About four inches of brass 1-1/4" sink drain pipe. The OD is actually 1-1/4", Yay for standards! I used a pretty brass pipe because I was using the flanged end for a different project.

One 1-1/4" neoprene washer. The ID doesn't matter much because you'll be cutting your own hole.

One 1/2"-3/4" long section of foam. I used a portion of the shaft from a beat up Gyrostrike missile.

So basically, just open up the blaster and remove the plunger tube. Take the tube and measure it up against your sink pipe. You'll need about 3-1/8", depending upon how thick the shoulder on your reducer bushing is. Use a pipe cutter to cut the pipe. And don't worry about the edge rolling in, you actually want that. Next up, take the reduced bushing and cut it so there is only 1/4" or so of the inside portion remaining on the flange. Sand the inside of the pipe on the cut end (should be slightly narrower) and the outside of the bushing a bit (use rough paper, like 80 grit) to promote adhesion. Use epoxy putty to adhere the bushing inside the end of the pipe. Set aside to cure.

Then remove the plunger shaft, complete with spring and everything. Next, push out the pin which holds the plunger head on to the shaft, and remove the head. Set the shaft aside. Take (or manufacture) your plastic washer and do one of two things to it: (1) Drill a 7/16" hole in the center. Or (2) drill a 5/16"hole and cut corners to accommodate the square plunger shaft. I chose the second method and used my scroll saw to cut the corners. Next, cut the inside hole of the neoprene washer to fit the plunger shaft. Depending upon how thick your washers are, you may need to use a third, smaller washer on the front, as well. I did not. I was able to then cut a small hole in the foam and use it to take up the space. Basically just squish the foam down and slide in the retainer pin. 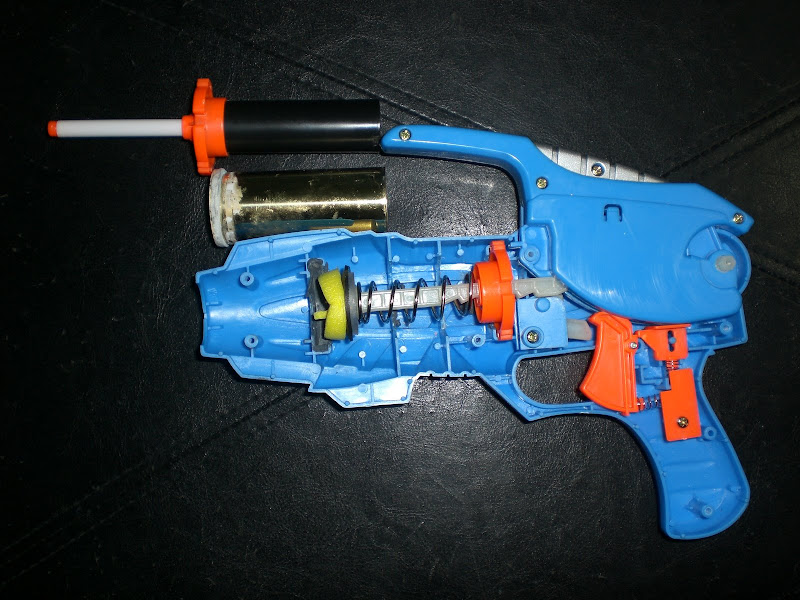 The last big step is to cut away enough of the cross members in the shell to allow enough space to seat the tube. Make sure to leave the very front plate intact to retain as much strength as possible. Next, we just mix up some epoxy putty and press the tube in place. Make sure to be using moistened fingers for this, because we just want the shape to form, without actually adhering the tube to the shell. Then close up the shell to form the putty. Reopen the shell, allow the putty to cure, and reassemble everything. 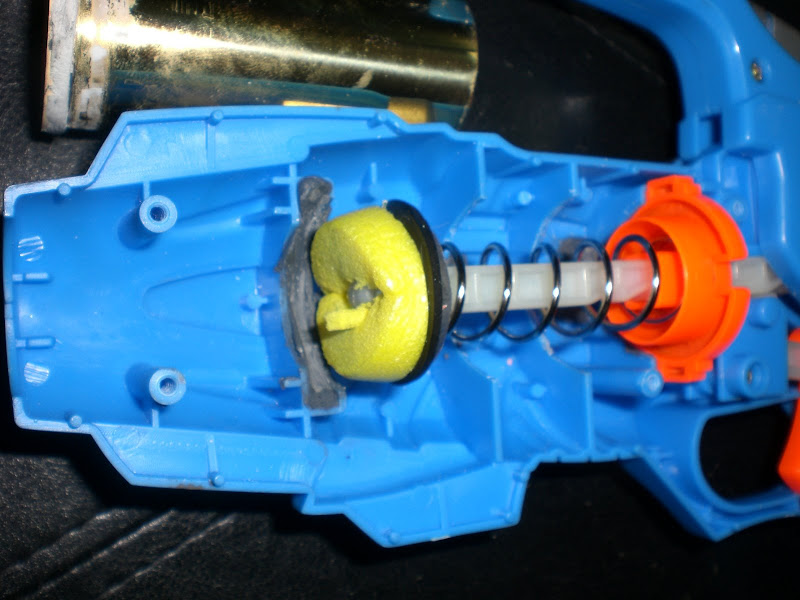 I've been using 3" CPVC barrels, and consistently achieve 50-60 foot ranges, all with the stock spring too. Probably could use a longer barrel, but I was mostly thinking of my son and stock darts.

So there you go. This isn't just a mod for the Firstshot, either. The same pipe diameter, and washer sizes for the head can be installed wherever you can get it to fit.

Nope, the PT is a little bigger than in an old TTG, and on mine it shoots 85' flat, with a 7,5" barrel. So a 6" is the right length. And Draconis, it's good to get the little ones into Nerf. If they grow weary of it, show them to mod the guns. That is how I got my 17-year-old cousins into it, they would shoot each other to the point of welts on 58% of their bodies. When Kyle modded a Titan Angel-style and shattered a window, the dart continuing and then striking their dad in the forehead. Now they can't Nerf in the house with banned guns.

American society: A legitimate clusterfuck since 1965.
Back to Modifications