The Foundational At2k Airflow And Much More Modification

Okay, let me start this extensive mod write-up by saying a thing or two. First off, the airflow
increasing part of this mod are imaseoulman's ideas and practices. Everything else I did myself.

This mod is basically going to making a 2K as effective as an SM1.5K. So first, we must ask
ourselves, why do 1.5K's get so much better ranges than 2K's? They have identical tanks, and
their turrets have the same kind of sealing mech. So why is this? Air-flow. Air-flow is why the
1.5K performs so much better. If you look at the holes in the turret of a 1.5K, they are
considerably larger than those of a 2K. Take a look at the stem that leads from the airtank of a
1.5K to the guns turret. Also larger than that of a 2K. You fix those two choke points, your 2K
will be performing similarly to a 1.5K.

Now for the actual write-up. Open up your 2K and take out the internals. Take the air tank and
grab the stem leading to the turret with some pliers. Wiggle it around until it rips off. Using wire
cutters, snip off where the goo gauge connects to the tank.

Now widen the hole with a screw driver that has a bit less than a 1/4" diameter. Be sure to hold
the tank upside down while twisting, so bits of platic don't go into the valve.

Once the hole is a tight fit on 1/4" OD vinyl tubing, super glue about 2-3 inch stub of tubing in (the
picture below has too little tubing, I remedy that later on).

Now cut the goo gauge off of the yellow tubing as close to the goo gauge piece as possible.
Using the valve stem piece we took off earlier as a coupler, super glue in the new tubing and the
stock yellow tubing. (Here you'll notice that I had to use more tubing and find another "coupler"
to make up for my previous mistake. The "coupler" is from a dead LPEG airsoft gun and was
previously the gun's barrel.)

Now plug the pump. Put away the valve for now and take out the turret. Unscrew the center
screw. If the orange piece the screw holds on doesn't fall out, grab it with some pliers and pull it
out. Now start removing the stock barrels by slowly wiggling them out. Don't bend the barrel
outwards from the turret, because that will crack the barrel stubs, which you need intact to house
your barrel.

If some barrels don't come out, dip their bases in boiling water and then wiggle them out right after
pulling them out of the water. Wear gloves! Here's what it should look like if you did it right, save
for the cracked barrel stub. Hopefully you didn't do that like I did.

Let's take a look at those pansy turret holes.

These need to be widened. The following is a picture from the back. The shaded green part is
what needs to go. Don't go past the dark green line or you'll ruin the turret's seal. I accomplished
this by first twisting old scissors through there, and then twisting through a flat head screw driver
through which at it's widest point is the exact size of the sealing mech you don't want to fuck up.
Lucky me!

Here's what it should now look like. Do this to all four holes. Also the back end of the turret may
need a little widening. Just don't go past the sealing mech.

Now slap in some barrels. They can be longer then your standard 2K barrels because of the
airflow mod. I used 8-1/2" of PETG. Don't necessarily use that, because it changes depending on
dart fit. Just use about 2 to 3 inches more than what you would normally re-barrel a 2K with.

Now for connecting the valve to the turret. Take the turret and glue some 17/32" brass on like
so. Be sure that the brass doesn't go as high as the orange piece that holds the spring on, or else
you're turret won't rotate properly and the brass will be at an angle to the turret base. Been there,
done that.

Now take some 1/2" brass and glue it onto the valve like so. The size I can't remember exactly,
but it needs to be near perfect. Basically measure so that when its cut the 1/2" brass will go as far
into the 17/32" as possible while still being able to fit the turret and the valve into the shell.

Now for the pump. Take a 1/2" PVC elbow and glue in a segment of PVC. Super glue or epoxy
this onto the pump shaft after removing the stock pump handle.

When that dries fill the other end of the elbow up with hot glue, but leave enough room for PVC
to be inserted into that end.

Put everything back in the shell. That white piece inside the gray cover is a check valve. I busted
the stock one. 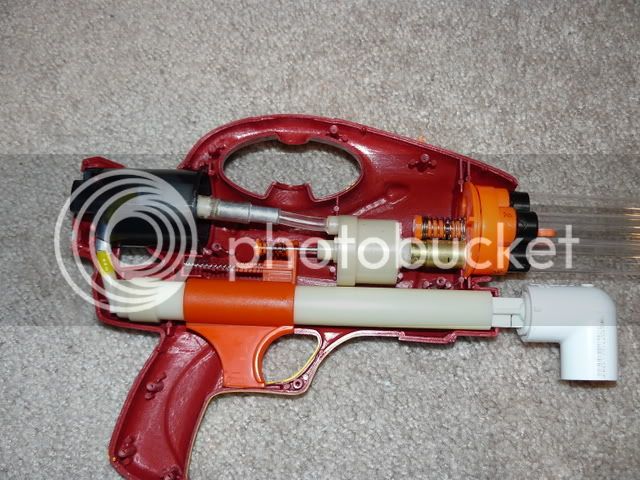 Screw 'er up and you're almost done with your beast. You now need something to space the barrels. Very soon I will be offering 2K barrel spacers so
keep an eye out. Until then, wrap some plastic rod with e-tape until it fits perfectly between the
barrels. Use a bit of goop so its still removable and shove it in.

(Ignore the gun name and pump count warning. It was made for a friend and the name is an inside
joke.)

ahh damnit someone beat me to posting another one. nice work the turret mod makes a good diff fixing up that seal there with brass was good thinking.

BTW: You can take the AT2K up to 7 pumps. I do that regularly, and have not had any problems.

BTW: You can take the AT2K up to 7 pumps. I do that regularly, and have not had any problems.

I got mine to 12 pumps, the pump broke though, the gun still works fine. It gets over 110' range with a 1 ft CPVC barrel. It's my loaner or secondary. My primary is a quad mod at2k with 8" barrels, I can pump that to 5 without it leaving large welts or opening skin, it'll take up to 12 also with over 95' range.

Now widen the hole with a screw driver that has a bit less than a 1/2" diameter. Be sure to hold
the tank upside down while twisting, so bits of platic don't go into the valve.
[ img ]
Once the hole is a tight fit on 1/2" OD vinyl tubing,

Thank you, you're right. It was a lot to write at once and I was speeding. It will be edited shortly.

robo: I told him he can take it up to six. That's just if someone other then him starts fucking with it.

Sweet! I'm getting 2 at2k's from a friend soon, I might try this mod with one of them. It seems like alot of work though, and I don't know if I have the resources to give it the better airflow.

The basic air flow mod isn't the much work. Just remove the nozzle/stem and then find some sort of tubing (I use PETG, but pretty much anything would work) to reattach the tank to the turret. After that, just widen the turret openings. That's pretty much it.

TantumBull, nice work. The craftsmanship looks nice. How do you like your new PVC handle?

Drew: It really isn't too much work. I just went into a lot of detail in the write up. Later I can make a materials list if you'd like, though.

imasoelman: Thank you. I'm loving the handle. It makes it A LOT easier to pump.

Betrayal: Thank you as well. I haven't actually measured ranges but when I shot it outside with my SM1.5K it shot just as far give or take 10 feet. imasoelman has the same mods and has the same barrel-dart fit as me and he's getting in the 100's or 90's I believe.

You already made a post about this in the modding basics thread and I replied there. Your problem also doesn't apply to this mod at all.

I commented on shredding stock darts in the IRC chat and was told that's pretty common. I know the 'Splat (PS800) shreds them consistently.

I found a solution in planting the back end of the dart on some masking tape and cutting along the contour. The end result doesn't upset the balance much, but does seal the end, at least temporarily, and I've not had a dart shred without the tape first peeling away.

As for spiraling darts, I can't speak from a wide pool of experience, but just from playing with a singled Titan, I've found a whirly-dart means I have too little weight on the head. If you're doing BBs, you may want to experiment with slingshot ammo or fishing weights - you know, the standard scientific method of same dart, different barrel lengths, diameters and materials, varying one at a time, then different weights and perhaps lengths once you've found what looks to be an optimum barrel recipe.

Also from chat, I learned that centering the weight is important. I've had a hard time setting up 3 BBs in a way that they're not unbalanced along one axis or the other. This is why I'm experimenting now with slingshot ammo.

If you've a chance, join the IRC chat - there are a lot of knowledgeable folk on. But, it's like here - do your research first; don't expect them to think for you.

sorry about the non related post. i have now used parts of this write up to make my version of the one pump at2k with a bicycle pump/stock. i will upload pics once its done if anyone wants. my question is, what is a check valve for and what is it on a stock at2k. the black piece before the goo gauge?

btw thanks for the help with the last question

A check valve is a valve that only allows air to flow one way. Otherwise the air will leak out the pump tube when you retract the pump. In the 2k its at the end of the pump tube. I had to add a new one on this gun because mine broke.