Got one at Meier today for $16.xx and its a really easy conversion. do nothing....

you need a nice stiff stefan or a streamline dart... break open breech and shove dart into barrel... for a used and abused dart, I use a piece of 1/4in dowel rod.

Unfortunately the stock barrel is only 3in long... BUT a 12in piece of brass slips perfectly into the barrel...

I took mine apart a little bit more just to see how everything looks. 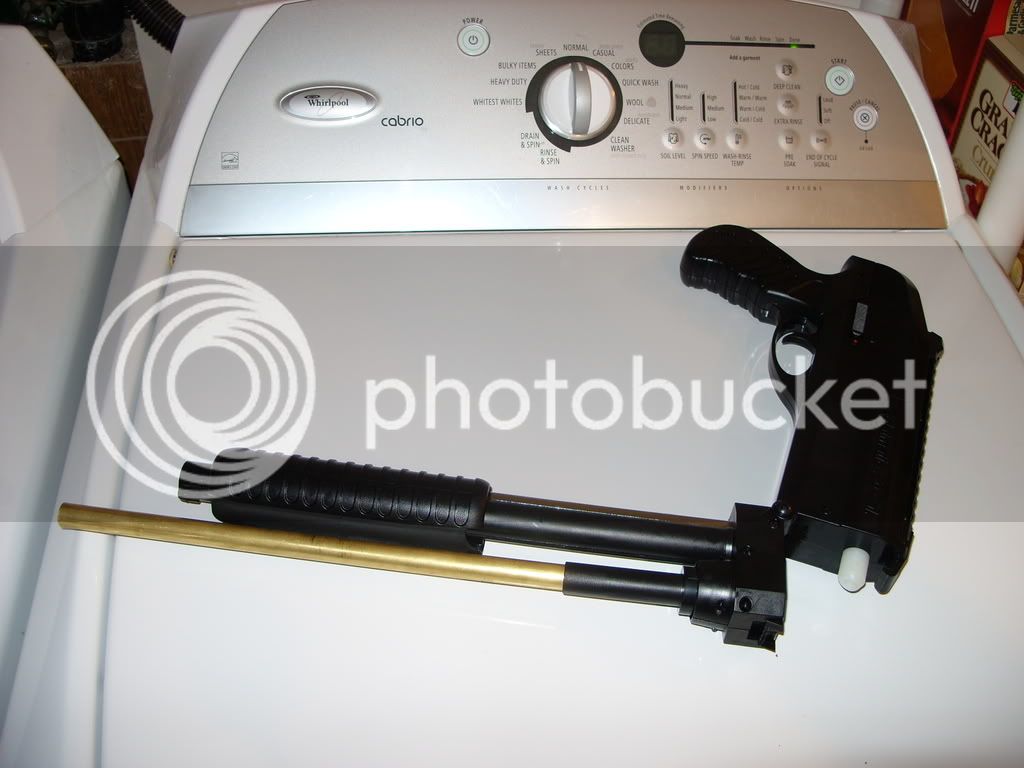 1/2in brass slips right into the breech.... I put a very large oring close to the tip of the barrel to keep the brass centered, the whole deal seems to twist and warp a little when pumping the spring, it is quite stiff...


I could only find 3 stefans the first one shredded while testing with the 3in barrel. I fired a streamline from the 3in barrel and it went over 90ft but flew in a corkscrew pattern...

with the 1ft barrel I lost both stefans and another streamline dart, I will look for them in the morning.

Holy crap the possibilities. You rock in my book dude. I want one of these so bad.. But I have so many other projects waiting..

Can we get a shot of the internals? I have a PS-800 and it's insanely powerful as well. Try 7/0 weights.

Edit: Oh, and how does it work? I thought that the shotgun handle might cock the gun, but I see no way of it actuating anything on the inside, let a lone a beast of a spring.

It's like being a nerfed version of the terminator without all the muscle and the electronic eye, unless you're a bodybuilder who lost their eye and decided t have it replaced in one of the most expensive ways...

If it's pump powered, how many pumps?

I think it says on the page were you buy it that its a paintball gun so I think its a springer.

You can also find it for sale in clear plastic.

It's a springer, and the pump action seems to push a steel rod through the hole above the hinge axle that interacts with gears that prime the plunger rod.
The pump action when stock also loads a paintball from the tube magazine into the barrel.

clear would be nice capt... not sure if I wanna be running around the woods with this, not to mention the fact that im sure it will be banned from any nerf war.

ranges.... 3 shots... 2 stefans and 1 streamline dart. 95ft measured
125ft 100ft measured 25ft estimated
and the streamline dart which had the hole in the tip hotglued shut flew in a huge corkscrew and landed at least 150ft away, Im sure my Stefans need more weight... I have 5 pieces of led shot in each, but I never weighed the lead to compare it to the BBs. I cut one of the Stefans from 2in to 1.25in and it only went 60ft... I wanna try a converted Dart tagger next but got a picnic to go to.
I shot myself point blank in the foot with a streamline.... It REALLY hurt... like more than my airsoft gun or my paintball gun... sometimes the breech pops open when I fire from the pressure, Id like to take it apart and see the inside but Im gonna play wiht darts and see how much I can get first.. its made pretty well, Im sure yo could put a bigger spring and make the plunger seal more but if the breech pops open each time it wont help.

Got some @ Meijers on clearence too,I've been using it to encourage the squirrels to stay out of my apple trees for a couple of weeks now. Very nice at the discounted price, but would not recommend at the retail $59.99.

.50 cal paint balls or stephans accurate/effective to about 100' with no wind.

From slug's picture, the plunger looks puny. How do you explain those ranges?

From slug's picture, the plunger looks puny. How do you explain those ranges?

Not to mention most airsoft springs are very stiff to begin with.

Don't mess with Texas cuz its bigger than France, bitch..

I can't say much for accuracy, all my darts fly in huge corkscrew spirals. but it does seem to have potential. the long barrel keeps the darts from exploding and for now thats about all it does

Yeah but the shotgun is still just so cool. Who wouldn't want to shoot the neighbor kid with that?

they have those at Spencer gifts for $10

Amazing, im in crossbow withdrawal right now so this might help. I might paint mine yellow and green with a big ol' smiley face on it just for safety.
How does it feel in your hands? Is it balanced?
I must get one.....

Off topic: i just thought it was interesting that they had paintball products and i kept scrolling and found throwing knives? Thats a rather violent hobby. i mean.... someone could die......

I keep finding recent topics that I missed...hmm, anyway.

I got one of these at Cabela's (in Wheeling, WV) last weekend for $30. I took apart the back portion of it (where the spring and plunger are housed).

Recommendation: don't open the back half.

The spring shot out; fortunately, it only hit a cardboard box. Once open, it was kind of hard to get the gears and pump set correctly. Also, it was difficult to close back up. Finally, there's not really anything worth doing in there.


The plunger chamber seemed to have an inner diameter slightly larger than a PS-800 (which I am a big fan of), and possibly a larger plunger stroke; I didn't have time to open up my PS-800 to do actual comparisons.

The plunger head is not like the PS-800; it's closer to the old-school nerf ones, but is made of a hard rubber or plastic (rather than soft rubber, like the BBB, for instance). When I stuck a piece of foam backer rod into the air output, the plunger slowed down to a crawl; therefore, I conclude that the plunger seal is just fine.

I took a few pictures with my mom's digital camera before the batteries died, but I forgot to get them off of the camera; I can get them up on Monday, although I'm not sure if there's anything of note.

As a side note, the three screws on the grip allow you to take off the grip; the grip is separate from the rest of the back half of the blaster. Another aside: the catch that allows you to open the blaster is kind of hard to pres. It has a strong spring, and is rather recessed. I can, however, flip it closed with one hand.

To preclude such questions: no, I didn't do any mods. Also, no I didn't do a range test. However, I can say that the iron sights are quite accurate...at least at a distance of 10 feet or less.

Another recommendation: Paint before nerfing outside. This thing looks very realistic.

And now a question, Mr BadWrench: Does the brass go all the way back (into the tighter barrel section)? It appears to in your pictures, but I'm not sure.

And another question: How did you get the extended barrel off? Did you have to cut it, or did I miss a screw while trying to take mine apart? The back of my barrel came apart fine, but the front of the barrel seemed to be glued together.

And a third: What do you mean by "the breech pops open"? Do you mean that it breaks in half?

Edit: I almost forgot: There is even cushioning for the plunger head! The plunger head has a short yet strong spring on the front of it.

there are 3 screws holding the barrel on... 2 near the breech and 1 between the barrel and the magazine towards the end.... it does not come off easy and I was afraid I was going to break it..

There is a rubber seal in the breech, I jus tpushed the brass into teh barrel untill it got to the rubber seal and left it there.

they have those at Spencer gifts for $10

I got one of those PistolSplat things a while back when Amazon had them on sale. I amused myself with the cheap paintballs for a while, then put a CPVC barrel on it with the intentions of using it with stock darts. To my dismay, every single one I shot (BuzzBees and Nerf) spun all over the place, sometimes even landing behind me, and had massive rips in the side. It doesn't sound like you had this problem though, Bob, so I guess I'd better open it back up and take another looksee at them internals.

Z4 of the NIC
"We are here to have fun with the toys we love in a civilized and friendly manner."- Talio

It could have easily been the barrel length, because of that guns air-output it rips darts by going into the hole (no pun intended)

Yeah, I was guessing that some of those reasons were why, but I wanted input from others. The use of stocks was 7 months or so back, I've moved on to stefans now. I'll have to crack that thingamajig back open when I get the time.

Z4 of the NIC
"We are here to have fun with the toys we love in a civilized and friendly manner."- Talio
Back to Modifications · Next Unread Topic →