Ok. So I've been wanting to crack open the latest transformer blasters for some time now. But with the $30 price tag I've been reluctant to get one as has been the story for most. But durring my hunt at Value village I came across a Starscream. And it was only 5 bucks.
I'm down.
So I grabbed it.

Now cracking it open was pretty simple, however the hard part is the two front orange rings that are glued and hold the two halves toghether. you may need to cut them. Or they may just pop off with a little pressure. All depends on how much glue they used on yours.

Inside we find a double plunger system each plunger is similar in size to that of the DTG however the spring they used is much longer and is actually precompressed to about 70% of its total lenght.

I was going to replace the springs with DTB springs as they would be stronger then the stock ones. But I can't remember what gun I put them in. will have to try that later.

Now for the plunger tube its pretty much the same as the NF's so mods are going to be similar.
Remove the AR's drill out the plastic behind the AR. ( I drilled it out more then shown here this was the initial hole I made before opening it up with my stepping bit.

Next figure out what size barrel you are going to need. I kept them short since they would be front loaded anyhow.

Now originally these things are ment to fire mega's so the barrel replacement is rather simple. Wrap your petg about 2" up in electrical tape till you get a decent fit. And then wrap about 1/8th of an inch as well just with not as much. internally the stock barrel gets smaller.
You might wanna test fit here as well.

Now put it all toghether. I used some plastic cement on the barrel and plunger system to keep all the small parts toghether and to make it air tight. the plungers can still be removed from the rear of the plunger tube if I need to or want to continue on with a spring replacement.
You might also take this time to squirt some silicone lube in the plunger tube.

You might also take this time to squirt some silicone lube in the plunger tube.

Repeat with the other side.


And then put all the internals back in place and close her up.

Results-
Originally the gun had issues. I only had one mega sized dart and it wouldn't even leave the barrel. If I had a real mega I'm sure it would have gotten 10' at most if that. Rather unimpressive for a $30 gun.
After the replacement and lube ranges were about 45-50 feet.

Meh. For as bulky as the gun is these are not impressive by any means. And I wouldn't actually use this gun in any kind of war as again its HUGE and its lackluster ranges don't make it a contender. I considered the possiblity of minimizing it. But really its not worth it. Once you hack it up then you have ruined the coolest part of the gun. The fact that it transforms from a freaking jet to a gun.

BTW I'm sorry for the weak quality pics. I took these pics with my cell cam all super secret spyguy like.

How do you prime this gun? Do you pull back that gray handle in the second to last pic?

ahh yeah sorry the priming mech is the handle on top. It also fires both darts at the same time.

"You've failed me for the last time Starscream!" - Megatron.

Good Mod. The picture quality isn't that bad for taken with a cell phone. But just a small request, do you think you could take a pic of it, well, "un-transformed?" I acually don't know what it looks like. Does it just look like a toy jet? 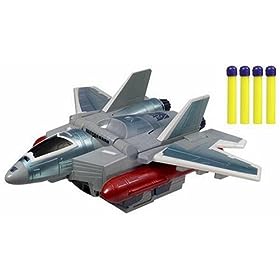 My god, you actually built it. To that, all I can say is, "bravo".
Chubbs

I don't believe so. It's just supposed to look cool (in the eyes of eight year olds.) I was browsing in target one time, and I overheard a parent who was about to buy one of these transformers guns. I said something along the lines of "Nerf guns are much better" and directed them to the NERF section...

"Hokey religions and ancient weapons are no match for a good blaster by your side."
-Han Solo; Star Wars: A New Hope (IV)

In an office of tech support geeks it has a very high rad factor and really it does shoot well enough to be a great office blaster. You really don't need a cardboard piercing 100'+ gun in the office. This will nail someone a couple rows over so thats good.

Hey this mod is worth it.

Starscream kicks MAJOR ASS and at Walmart (next to the Cigs and tobacco) they have clearance toys, I saw this for $8.99. I'm picking one up

Thats cool. I like how clean it looks. The only problem I see is the bulkiness of the blaster. But other then that, good job.

I think that your ranges could be a tad bit better with a replacement spring, but this would suit me.

I'll know what to do when I pick one up from Goodwill.

... to be able to get a better burst or sustained fire, rather than blowing the whole load at once.