Either or, it would be a good time.

I'm coming out, I'm bring my two tubs of old crap and bits to sell. Bring money or darts for me to use cause the more you buy the cheaper it is.

Hey Like what cheyner said, lot of the guys grew out of the hobby or moved away from the scene

K9 Cookout
Pm me with orders

So as some of you may know I've returned after a long hiatus from nerf, I'm just curious what the state of nerfers is like in the Calgary/southern Alberta area and if there's any interest in having a war this July ish.

You actually finished it!!! Sweet!

Reminder, I will be serving food there. Pm me with your orders

Also, what about 'telescoping barrels', such as 6" of CPVC at the breech end, hammered into 12" of PVC? I would think that extra air would be able to escape around the side of the barrel in a more controlled fashion, and evenly around the dart so it doesn't destabilize it.

Well, I have two barrels that come to mind:

1. I got titan with a 10" petg barrel in a 24" pvc sheath. It feels like that the darts are firing more consistent, and I don't recall any fish tailing out of the barrel; I have seen seen it happen coming out of BBBB regularly.

2. On the same titan, I have an 3-shot inline shotgun barrel, 5" petg in 8" pvc, so the grouping appears to be tighter than with a 5" pvc sheath. 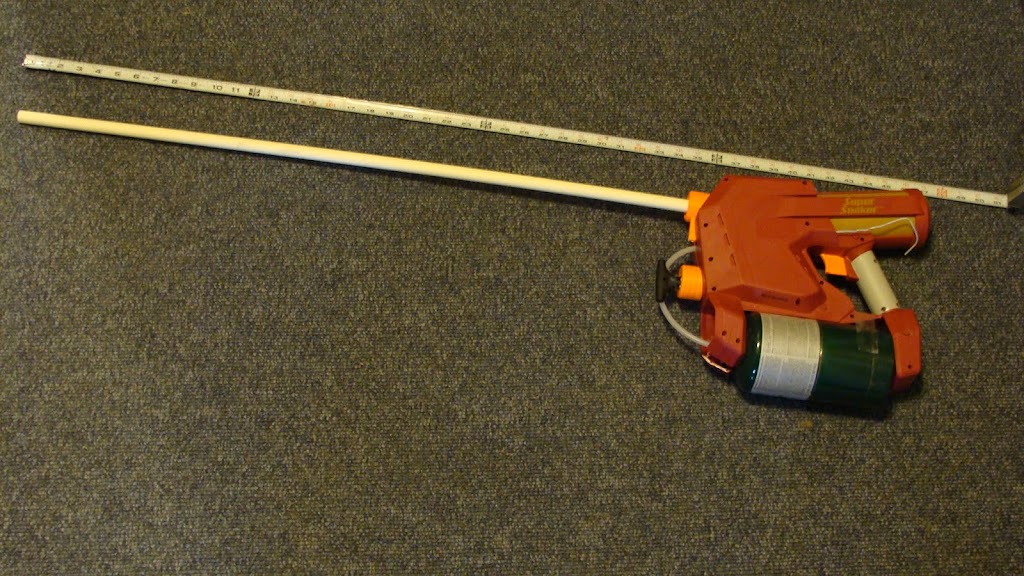 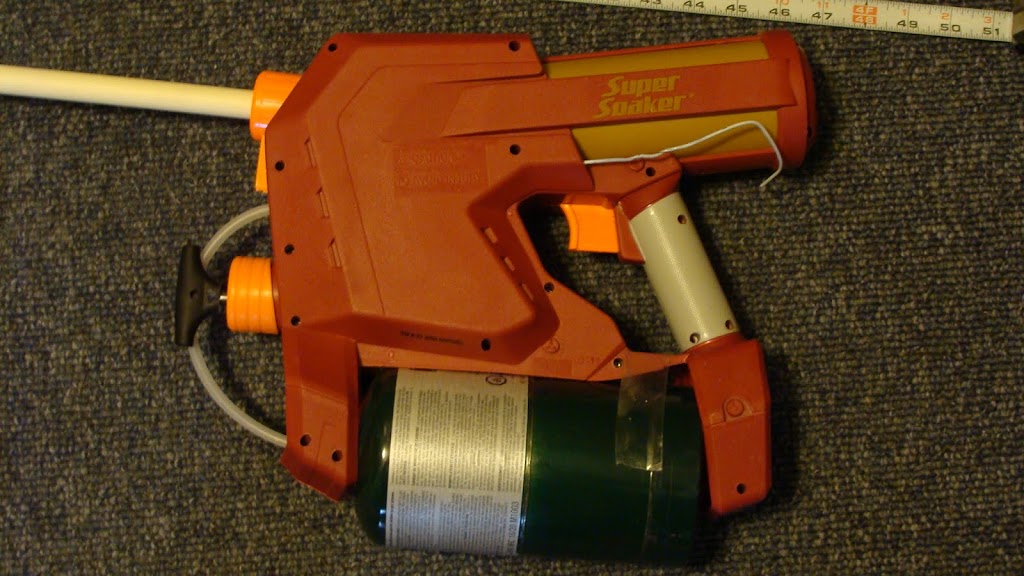 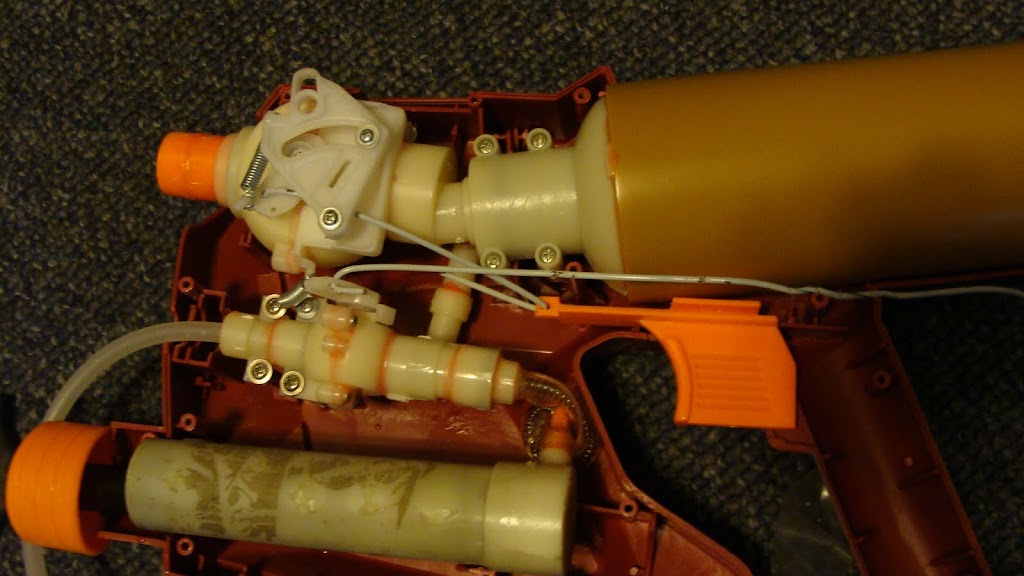 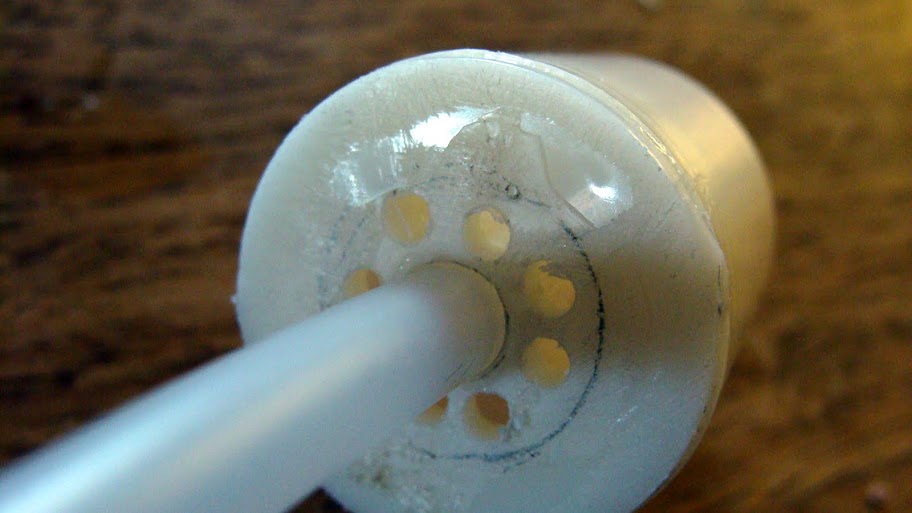 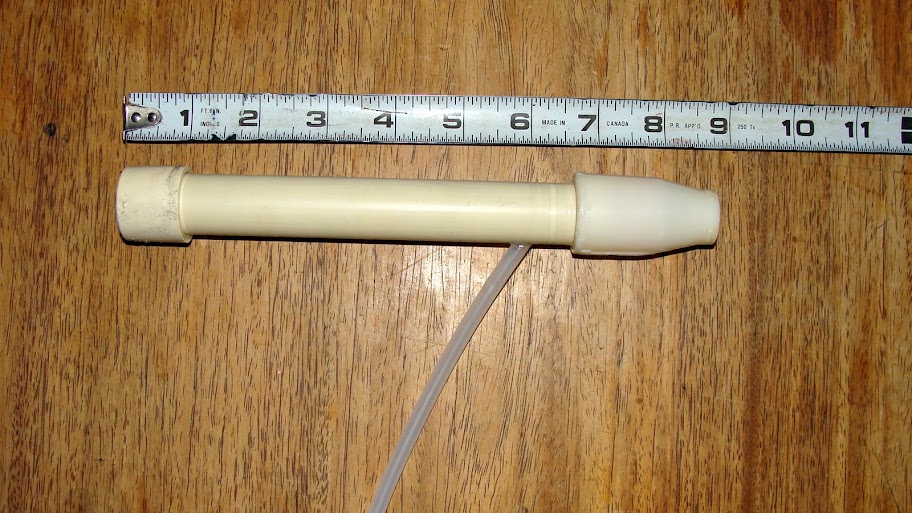 
#295187 High Volume Springer, Easy To Make And Cheap Version Of +bows And Snap

Mind I was trying to the exact same a couple months ago, but my plunger rod and catch combo was agreeing so the project got the backburner.

AT2k stuffed into a Tommy20

Yes that was a propane tank you saw.

If you are gonna use a hard tank, use a bank of converted propane tanks. They are safer and also have a built in PRV that is set at ~250psi.

The only problem I see with the Sidewinder X3 is that the side buttons are quite inconvenient...
I was thinking either the Logitech MX518 or the Razer Deathadder. Even though they're quite a bit more, they're suited to what I need, however I don't know which one to get as they are both reasonably good mice. Any other suggestions?

Well I had added hot glue domes to the side buttons. Makes it easier to hit the buttons, but I still haven't really used them yet.

Copyapasta from the other forums:


WHY HEAVY WEIGHTED STEFANS ARE RECOMMENDED: (3/0 and 1/4" weights are the same mass)
- More accurate/consistent
- You know that you hit.
- Less likely that the darts will hook up and nail you in the face
- "Man up, girly-man"

WHY MARSHMALLOWS ARE DISCOURAGED:
- lack of re-usability
- Crusty ass barrels
- Too many would be eaten


To sum up vast majority of the opinion of the Canadian nerf scene.

WHY SLUGS ARE DISCOURAGED:
"90% of the Slugs that have appeared North of the border, have all sucked ass. So it's easier to ban them all than weed out the good ones"

WHY Glue Domes w/washers ARE DISCOURAGED:
- Exposed metal, there is a line between taking a welt and getting cut

Probably going to get a gaming mouse soon. I really need some suggestions as I like too many of them. Also, will all those flashy mice with LEDs and crap work on laptops? Don't know whether my USB ports on this laptop are powered or not. Thanks.

USB ports since at least 2001 have been powered, no issue there.
If you need a "gaming" mouse, avoid most wireless mice, There is an inherent amount of lag.


My personal mouse:
Sidewinder X3
It's comfy and takes a beating, plus you can get them cheap

Perhaps you didn't account for the compression length of the springs, move your trigger forward 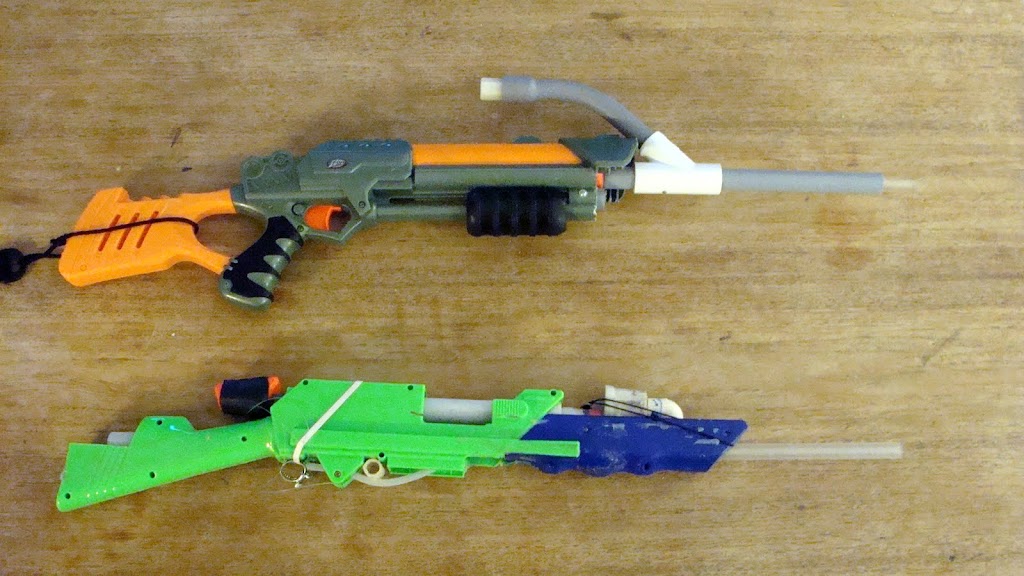 And yes, Rfr holds 20 stefans in the RSCB

So I'm continuing the tradition of me catering the Canadian nerf scene.

So here is the menu:

Those that are interested, I need to hear your orders by 11:59Pm on Thursday.

PM me either here on the Haven or CanNerf

Well if it counts for anything, the Canadian group has been calling the LSG for the Lanard ShotGun

Awesome work. I didnt realize we lost by that much in monster mash.

It didn't work back then...

For my understanding of the GTA Canadian rules.

You need a dart in the barrel, to tap.

And you need to have a turret/clip that holds multiple darts to tap.

Since this is a relative gun.... 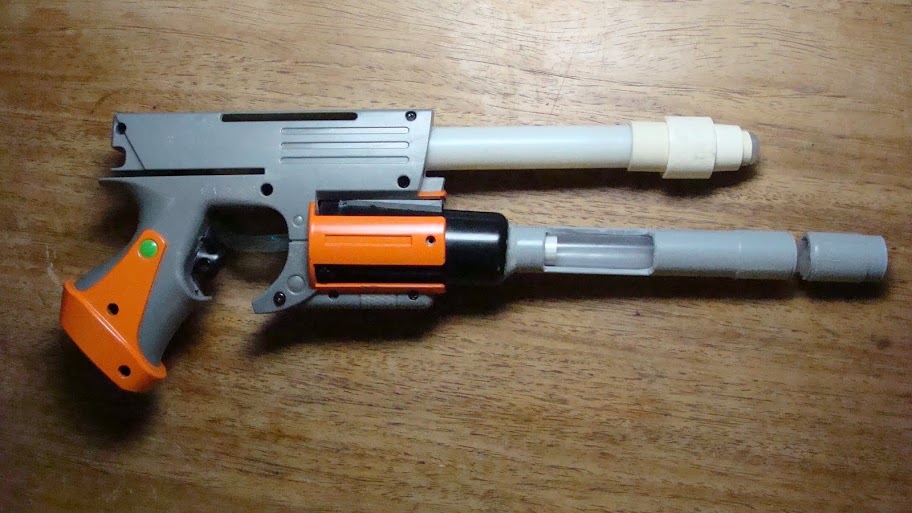 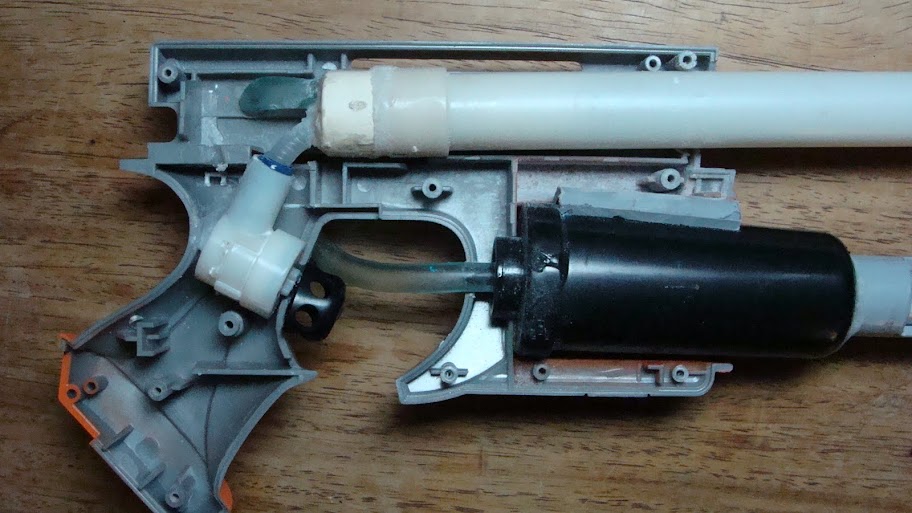 Punches out 80ft with a crappy breech

For whatever reason, the following link wasn't posted on the haven.

Nisaburo, Those some nice guns, and I like the K9special reference, It's been a while 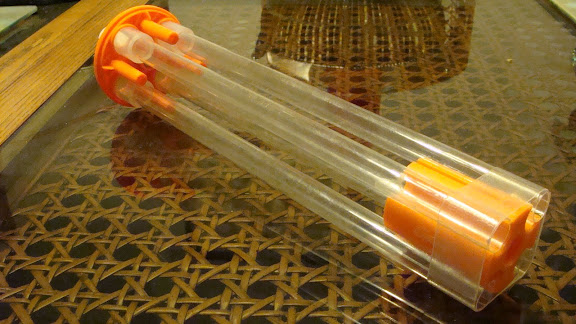 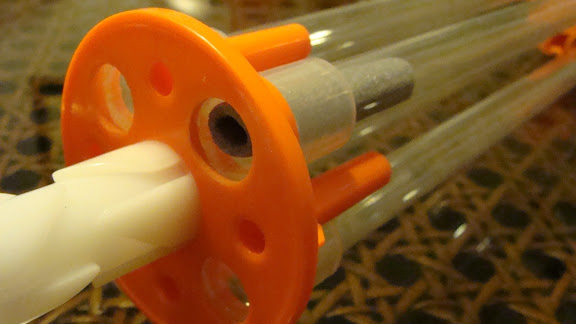 I'd believe that some people would be dumb enough to nerf without eye protection considering there are those that are dumb enough to post comments that DO NOT help our stand that this is a safe hobby...

I was almost blinded in my left eye (my shooting eye) by a modified nitefinder from about 15 ft away. I have been wearing eye protection ever since.

This was the post they referenced, this clearly isn't the worst injury in the thread.

And who is the douche wearing tacti-cool crap hosting a war and talking the press?

Punches out 80ft with a crappy breech

Write up will follow once I perfect the homemade pump.

Well this is my "secondary" pistol, It houses a BS tank and it punches out 80ft and it is usually tucked inside my jacket.

- I rather rather have that gap before the getting close to the other guy
- If the other guy knows I only have a single shot pistol left, He probably would be as scared if it was the LSG

Keep the trigger and grip exactly where they are... I wouldn't call it backwards at all.

Assuming I'm not blind, that would make you shoot yourself.

I think this thread has run it's course.

Not a good mix if you want to keep a constant speed.

since we are not going to Nerf in space (as awsome as that would be), the air resistance will be constant, therefore the equation need not take it into account. If you ever have a bullet stop in mid flight, then drop straight down, let me know, and I will make a new euqation.

*induced drag does not apply to darts*

Since:
As the speed increases, drag increases.

Therefore:
The drag is not a constant.

But are you assuming that there is no loss of energy due to friction?
If so, you fucked up

But good job for being able to apply your Gr 11 physics to nerf. 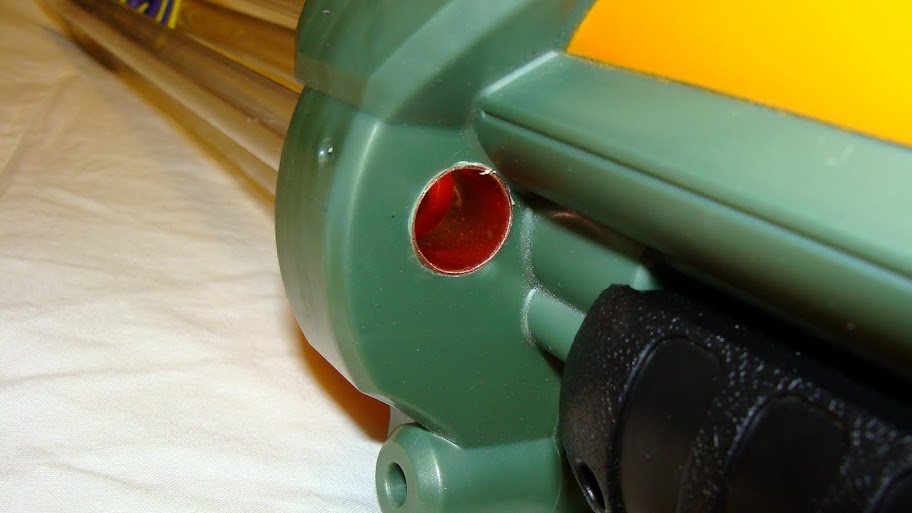