I assume that arriving like 45 minutes early isn't a bad idea, espescially if trading and such are going to be a part of things.

Oh right right right I see what you guys are saying...would it be possible then to wrap some e tape around the free spinning wheel to add more pressure on the motorized wheel, more intense of a curve but also more range.

If you're willing to make the tradeoff, sure. It'll curve, but it should go farther (assuming you're not squashing the disk into a taco-shape, there is a limit to how much they should compress). Give it a shot, and let me know how it turns out. E-tape's not the most permanant stuff ever, so if it doesn't help, you should be able to just peel it off.

Right-o, guvnor. So the totally filled ones are off limits, and the air-holes plugged are not looked upon nicely.what about something along the lines of dropping BBs down the hole in the back, just to add a little more 'oomph'? I also don't know how well these would fare, but if you OK them, I'll give it a shot. Thanks for all the help with this!

My coffers aren't nearly full enough to be able to handle Stefan mass production at this stage. I did, however, read somewhere about someone plugging up the holes in the rubber heads of streamlines (of which I have plenty) with hot glue, or in some cases just filling the hollow rubber cap entirely. I can't say I know if this would work better, but I plan to find out.

On any note, would either version be banned as a glue dome, even if I kept it under weight?

Hey, I'm a definite attendee. This being my first war of any sort, I did a lot of research on past APOCs and such. I've got a tricked-out LS, which I've been told should be a fine primary, and I may even be able to get my Maverick back online. However, it's the gunslinger pistol round that I'm worried about. If I can't get my Maverick back online, and it's an iffy business, would you count a creaky old Triple Strike as a pistol? I'd actually prefer it to a Mav. It can shoot either rockets (at a very modest distance) or 3-6 darts (suction, haven't tried it with stefans yet for lack of stefans...) or any combo of the two types.

What are your thoughts on stock parts? For example, if I were to be able to make something that accepted Magstrike clips, would that still be a homemade, with the advantage of a clip system?

My gosh, I'm in love. Am I cheating on my Longshot?

How long did you find that those two batteries lasted when you were just using the Stampede? I'm looking to do something similar (in terms of voltage boosting) and I'm looking for an estimate of battery power, to see how practical it'll be for wars when it's hard to recharge.

Well, I have a few different batteries, so that should last me a while. I can always use them until the lunch break thingy, and charge them while I eat. Worst case scenario, I sit a round out and spend it recharging, but I doubt it'll come to that. I do have other guns, a souped-up Longshot and a creaky old Triple Strike that I can use, in addition to the ever-popular Mavericks. Thanks for the advice on those car adapters, I'm looking for one now.

What kind of power facilities are available at the site? I have a stampede powered by Hobby NiCads, and a speed-charger to go with it, but I need an outlet to plug it in. From the vids I've seen on youtube (Courtesy of KNDOperative and ForsakenAngel), it's a big grassy field with no trace of civilization within an hour's walk, but that's just what I've been able to see. From someone who's actually been there, what kind of power can I get out of the park facilities?

Gentlemen and ladies, Nerfers of all ages... Now presenting the VORTEX SERIES OF NERF GUNS! Thanks to some Facebook sleuthing, I've found that on September 10, 2011, Nerf will release their new disc guns. 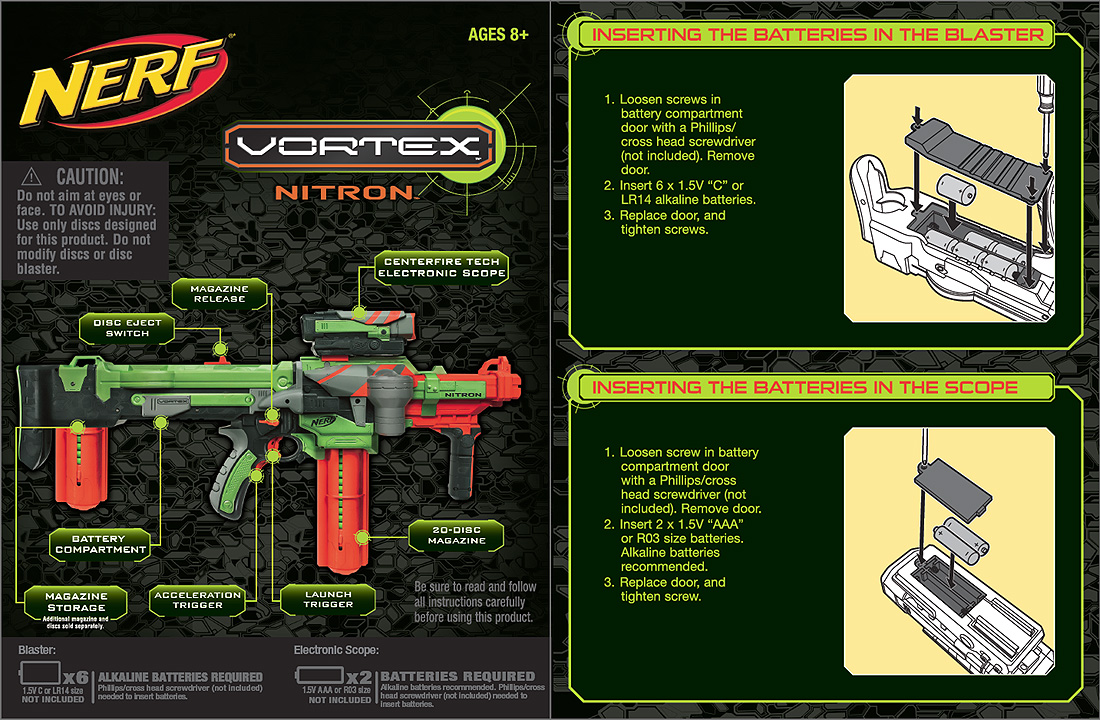 They seem to be battery powered and stuff. My guess is semi-auto fire, fueled by scores of 'D' cells.
Not to mention that the maverick, barricade, raider, and one other gun are getting a black and orange paint job retexture, being released in August sometime.

Now, the question you've all been waiting for... Why was Facebook told before us?

To the best of my knowledge, all 4 days work for me and my brother. He'll turn 13 a week or so before the earliest date, and I'm over that limit by a couple of years, so it's all good.

Being a FNG, what are the standard gun rules for APOC? I have a Triple Shot, some antique blaster from before time itself. It can load single suction darts, and I dunno if it's overpowered or what.

Also, if eye protection is required, do standard polycarb frames count? Or are safety goggles a must-have?

Thanks for the help, and I hope to see you all there!